In some strange, alternate universe, perhaps there exists a world in which Die Hard starred Frank Sinatra and remained a sequel to his 1968 cop drama The Detective. I’d like to think we’re better off not living in that world, but then again, it may have spared us from the dreadful fifth entry in that franchise.

For those unfamiliar with the history, Die Hard was very loosely based on a 1979 novel called Nothing Lasts Forever by author Roderick Thorp. The book, a thriller about an NYPD detective trapped in a skyscraper taken over by terrorists, was written as a sequel to Thorp’s 1966 The Detective, which had been adapted into a movie starring Frank Sinatra in 1968. 20th Century Fox optioned the rights to the book and, when developing it into a feature film, was contractually required to offer Sinatra the right of first refusal on starring. Then in his 70s, Sinatra declined. The project was then retooled extensively until it finally became the movie we now know as Die Hard, which bears little resemblance to anything in The Detective.

Today, the film version of The Detective is barely remembered as a footnote in the history of a blockbuster action franchise. In its day, however, the movie was fairly successful in its own right. Sinatra stars as Joe Leland, a plainclothes detective who catches the case when the son of an important businessman is murdered. Clearly a crime of passion, the body was found nude, stabbed multiple times and mutilated, with the genitals cut off. The victim was also gay, which triggers a lot of flagrant homophobia from most of the other cops on the scene, but Leland is much more reserved about the matter. A hard-boiled, no-nonsense kind of guy, he has little time or use for bigotry. He just wants to solve the case.

Under pressure to arrest a suspect quickly, with the promise of a promotion if he does, Leland coerces a confession out of the victim’s lover and, even though he has some doubts about how neatly everything ties together, soon sees him executed for the crime. Later, Leland works a seemingly unrelated case in which a beautiful widow (Jacqueline Bisset, whose pixie haircut reflects that she was a last-minute replacement for Sinatra’s soon-to-be ex-wife, Mia Farrow) refuses to believe that her dead husband committed suicide. Eventually, the two storylines intersect, and Joe must face the realization that he may have sent an innocent man to the electric chair for the benefit of his own career advancement.

These heavy themes and dark subject matter were pretty outré for 1968. The initial plot setup almost feels like some kind of precursor to Basic Instinct (minus any on-screen sex or nudity). Released just after the end of the Hays Code, The Detective was obviously designed to push buttons and test limits. In addition to the homosexuality and sexual violence of the murder plot, a lengthy side-story sees Leland’s marriage crumble because his wife (Lee Remick) is a nymphomaniac who can’t stop cheating on him. The treatment of this material has dated poorly in many ways, but to its credit the movie does try to take it all seriously.

In actual practice, unfortunately, The Detective is disappointingly restrained and conventional, with merely workmanlike direction from studio journeyman Gordon Douglas (Them!, Sinatra’s Robin and the 7 Hoods). It’s a very slow, talky movie, with only one moderately exciting action sequence. Cheesy flashback dissolves and rear-projection driving scenes hurt the production value significantly. If not for the scope aspect ratio, a few bracing uses of offensive slurs, and the presence of actual big screen stars, this feels more like a TV movie than a feature film.

On the other hand, Sinatra, Remick, and Bisset are all appealing stars. Although primarily known for breezier fare, Sinatra had proven his chops at serious dramatic work. Here, he plays it cold and tough, never cracking a smile, much less joking or busting out a tune. He’s all business in this one, not the smooth-talking crooner from the Rat Pack. Jack Klugman (just prior to his run on The Odd Couple) and Robert Duvall also have small roles, and the film has a jazzy score by Jerry Goldsmith that soundtrack fans may enjoy.

Released on Blu-ray in 2015 by Twilight Time and still in print, The Detective features a decent if unexceptional video transfer provided by Fox. The 2.35:1 image is acceptably detailed, but grain looks poorly resolved and leaves me wondering if any Digital Noise Reduction was employed. Although the film’s photography appears to be contrasty by nature, black levels are elevated and look a little washed out.

The DTS-HD Master Audio 1.0 soundtrack sounds fine (if constrained by its mono focus) with Jerry Goldsmith’s brassy score, but dialogue sounds very hollow and echoey in many scenes, I might even say a majority of them. Given that a lot of the movie’s scenes take place in small rooms with reflective walls, this may be simply be the fault of poor recording quality on set that was never replaced with studio ADR. The track often has a harsh tone with some clipping on the high end. 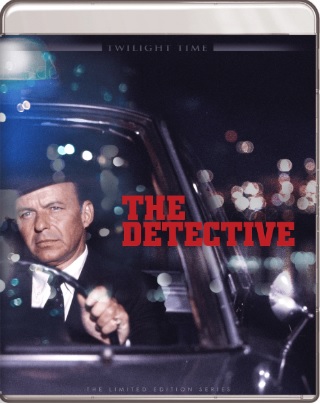