Like most songwriter bio-pics, My Gal Sal plays fast and loose with the facts, but this amiable if undistinguished salute to composer Paul Dresser showcases an up-and-coming (and breathtakingly beautiful) Rita Hayworth to terrific advantage.

Songwriter bio-pics were quite a fad during the 1940s. War-weary moviegoers besieged by worries, stresses, and depressing news craved escapism, and Hollywood obliged by cranking out countless musicals that helped Americans forget their troubles for a couple hours. Under the guise of biography, a few of those films celebrated such icons as George Gershwin, Cole Porter, Jerome Kern, and the duo of Richard Rodgers and Lorenz Hart, but they were really just thinly veiled excuses to pack a bushel of their beloved songs into a picture. Though the lives of composers generally lacked significant drama, their hefty catalogues of popular tunes made it easy for producers to hang a dozen or more songs on a flimsy story and still reap box office gold.

While most songwriter biographies are all-star affairs distinguished by lavish production numbers, a few – like My Gal Sal – take a more intimate route. This 1942 confection honors Gay Nineties sensation Paul Dresser, a composer whose most famous song is “On the Banks of the Wabash,” a homespun, nostalgic ode to his Indiana roots that later became that state’s official anthem. The film, directed by Irving Cummings, follows Dresser (Victor Mature) from his humble Hoosier beginnings to a stint as a novelty act in a traveling carnival and all the way to New York City, where he becomes a Tin Pan Alley sensation and has an on-again-off-again romance with Broadway star Sally Elliott (Rita Hayworth). In between their flirting, spats, and reconciliations, several pleasant musical interludes provide a sampling of Dresser’s best-loved songs.

Or do they? My Gal Sal is unique among composer bio-pics in that all of the songs contained in the film are not written by Dresser! While most of the score is comprised of Dresser tunes, a few songs are penned in the style of Dresser by 20th Century Fox staff songwriters Leo Robin and Ralph Rainger. That’s pretty weird, even by Hollywood standards, but it’s only one of a few deceptions that permeate this amiable film.

It’s true that songwriter biographies of the period routinely fictionalized the lives of their subjects, adding heartache, struggle, and strife where none existed to beef up a film’s dramatic content. The irony here is that Dresser (who was the older brother of the great American novelist Theodore Dreiser, author of An American Tragedy and Sister Carrie) lived quite the colorful life. He spent time in prison, struggled with alcoholism, had a penchant for prostitutes, frittered away his fortune, and died penniless. He also had a long-standing relationship with the madam of a brothel. (In fact, she’s the real Sal of the film’s title, not the refined, upstanding Sally Elliott character played by Hayworth, who is completely fictional.) Though My Gal Sal does allude to Dresser’s drinking and flamboyance, the film treats them as innocuous, almost charming vices rather than serious issues. Sanitization was of course required in 1940s Hollywood due to the strict Production Code (Cole Porter’s homosexuality was certainly not addressed in 1946’s Night and Day), but rarely did a studio try so hard to make someone’s interesting life so dull.

The lies don’t stop there. Dresser was also quite obese, weighing close to 300 pounds, but that small (or should I say large?) detail didn’t stop Fox from casting hunky heartthrob Victor Mature in the part. In addition, neither Mature nor Hayworth sing for themselves in the film. (I can’t recall any other musical of the period that dubbed both its lead stars.) Yet despite all these deceptions, My Gal Sal rolls merrily and obliviously along. It’s not a great musical, but it’s breezy, enjoyable, occasionally amusing, and lovely to look at.

Its beauty, of course, has a lot to do with Rita Hayworth in Technicolor. Soon to be dubbed “The Love Goddess,” Hayworth was still a rising star when she made My Gal Sal and her fresh-faced yet oh-so-alluring magnetism carries the film. A Hayworth close-up was money in those days, and this film makes the viewer feel very rich indeed. Her winning performance is full of spirit and spunk, but unfortunately her primo dancing talent isn’t properly showcased. The musical numbers lack panache, mainly because the period songs don’t lend themselves to vigorous or splashy routines. Though Hayworth looks lovely and dances with style and grace, she needs a partner like Fred Astaire or Gene Kelly to properly exploit her abilities. (In addition to You Were Never Lovelier, Hayworth co-starred with Astaire in You’ll Never Get Rich and with Kelly in Cover Girl, both of which were released on Blu-ray by Twilight Time.)

My Gal Sal only deals with Dresser’s early, successful years, so it remains light, harmless, and hopeful… just the tonic audiences of the day demanded. While its 1890s nostalgia isn’t as captivating today as it was in 1942, it does make us pine for simpler, more innocent times. Hollywood produced many illustrious musicals during its Golden Age, and though My Gal Sal doesn’t make the A-List, it’s a pleasant enough diversion for fans of the genre and especially ardent admirers of the heavenly Hayworth.

If you’re going to put a Rita Hayworth film on Blu-ray (especially one in Technicolor), you better be damn sure you have a dynamite transfer to showcase her breathtaking beauty. Well, Twilight Time, courtesy of Fox, gives us just that. Presented in an aspect ratio of 1.33:1, the 1080p/AVC MPEG-4 rendering looks lush and vibrant, with eye-popping hues filling almost every frame. Sometimes three-strip Technicolor can look overly garish and artificial, but not so here. Contrast is muted just enough to lend colors a more natural appearance without sacrificing necessary brightness. Faint grain preserves the feel of celluloid. Details in costumes and decor come across quite well. Close-ups (especially those of Hayworth) are gorgeous, and not a single speck or mark dots the pristine source material. My Gal Sal is certainly not one of Fox’s flagship titles, but this Blu-ray presentation gets the Cadillac treatment from beginning to end.

The DTS-HD Master Audio 1.0 track sounds fine, but lacks any pizzazz. Good fidelity and depth of tone bolsters the musical numbers, all the dialogue and song lyrics are easy to understand, and no age-related hiss, pops, or crackle intrude.

The only disc supplements are an isolated score track and an eight-page booklet featuring an essay by Julie Kirgo, tinted photos, and a reproduction of the movie’s original poster art.

Nick Redman, co-founder of the Twilight Time label and an esteemed documentary film and music producer, died last week of cancer at age 63. Every classic movie fan owes Nick a major debt. Due to his efforts, hundreds of classics that otherwise might never have seen a high-def release were made available on Blu-ray, and grateful fans like me gobbled them up. Nick and his wife, “the lovely Julie Kirgo” (as he would so often sweetly call her), recorded countless audio commentaries for Twilight Time, and it was always a pleasure listening to his dulcet tones and intelligent insights. Until last week, I never knew Nick and Julie were married. They always projected such terrific chemistry on their commentaries, and now I know why!

Nick’s death came as a shock to classic movie fans, but his legacy will live on and I hope others who care as deeply about the preservation of our film heritage as he did will continue his noble work. Nick, thanks for releasing so many of my favorite movies on Blu-ray. You will be greatly missed, and we salute you today with this review of a Twilight Time release from last June. 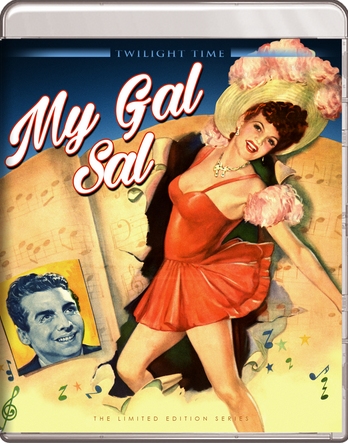