Director Stanley Donen may be gone, but because of films like Seven Brides for Seven Brothers, he will never be forgotten. The classic frontier musical with Jane Powell and Howard Keel is one of Donen’s most beloved films, and Warner Archive gives it the red-carpet Blu-ray treatment. Bless yore beautiful hide!

Say the name Stanley Donen, and some of the greatest musicals in Hollywood history spring to mind. In addition to co-directing Singin’ in the Rain, On the Town, and It’s Always Fair Weather with Gene Kelly, Donen helmed such timeless classics as Royal Wedding, Funny Face, The Pajama Game, Damn Yankees, and arguably his greatest triumph of all, Seven Brides for Seven Brothers. Sadly, Donen, one of the few remaining pillars of Hollywood’s bygone Golden Age, died last week of heart failure at the age of 94. Though his credits also include an array of non-musical films like the Hitchcockian caper Charade, the incisive marital dissection Two for the Road, the madcap comedy Bedazzled, and the sophisticated rom-com Indiscreet, musicals made and defined Donen, and Seven Brides for Seven Brothers helped redefine one of cinema’s most popular and enduring genres.

As Bing Crosby remarks in the iconic MGM musical tribute film That’s Entertainment!, “The next time anyone says that dancing is for sissies, remind them of Seven Brides for Seven Brothers.” He couldn’t be more correct. The muscular frontier musical showcased a new style of athletic dancing that incorporated elements of gymnastics and ballet. In the process, it liberated men from both traditional ballroom routines and the de rigueur uniform of top hat and tails. Reminiscent of Oklahoma!, but with more bounce and humor, Seven Brides for Seven Brothers overcame studio disinterest to become one of the all-time classics, and its masterful merging of story and song still enchants audiences today.

Deep in the Oregon Territory of 1850, frontiersman Adam Pontipee (Howard Keel) comes to town in search of a wife to cook, clean house, and help him manage his mountain farm. He scopes the local ladies and settles upon Milly (Jane Powell), whose hearty beef stew, strength of character, and pleasing looks grab his attention. Milly immediately falls in love with the rugged Adam and accepts his businesslike proposal against the advice of the village preacher. The couple marries the very same day and Milly excitedly embarks on her new life. Yet upon arriving at the Pontipee farm, she discovers her cozy honeymoon cottage is little more than a dilapidated shack, and instead of caring for one man, she’s saddled with Adam’s six brothers as well! Feeling more like hired help than a newlywed, the resentful Milly rolls up her sleeves and makes the best of her predicament, taming her backwoods brothers-in-law while struggling to forge a relationship with her stubborn, chauvinistic husband. The brothers, however, soon want brides of their own, and when they choose Adam’s barbaric style of courtship over Milly’s genteel approach, the townsfolk raise a ruckus and the Pontipee marriage hits the skids.

Seven Brides for Seven Brothers begs to be shot on location, with the natural beauty of mountain meadows and jagged peaks framing the actors and songs. If only MGM executives had believed in the project, it could have become The Sound of Music of the American West. Instead, this outdoorsy musical was filmed almost entirely indoors, with painfully obvious painted backdrops and amateurish rear projection work lending the film the worst kind of studio look. Luckily, the lilting score, dazzling dancing, and spirited performances overshadow the chintzy production values and imbue the movie with an exuberance few musicals can match.

A prime example is the virile barn-raising ballet, which contains thrilling acrobatics and some of the most macho dance moves ever put on film. Rightfully showcased in That’s Entertainment!, this exhilarating interlude does more than dazzle the senses. It also advances the plot, fleshes out characters, and provides plenty of period atmosphere. “Lonesome Polecat,” “Bless Yore Beautiful Hide,” and “June Bride” serve similar purposes and are eminently hummable to boot. Keel’s robust baritone and Powell’s soprano trills also complement such memorable Johnny Mercer-Gene de Paul tunes as “When You’re in Love,” “Wonderful, Wonderful Day,” the bouncy “Goin’ Courtin’,” and rousing “Sobbin’ Women.”

The witty screenplay by Albert Hackett, Frances Goodrich, and Dorothy Kingsley rightly focuses on Adam and Milly’s rocky romance, but succeeds in putting individual faces on every bride and brother – no easy task, but a neat touch that adds texture and depth to the story. Powell and Keel enjoy solid chemistry, and though the brothers (Jeff Richards, Russ Tamblyn, Tommy Rall, Marc Platt, Matt Mattox, and Jacques d’Amboise) grab most of the supporting screen time, two of the blushing brides merit mention: quintessential Catwoman Julie Newmar (billed here as Julie Newmeyer) and, in her film debut, saucer-eyed Ruta Lee (billed as Ruta Kilmonis). Both would soon graduate to more substantial roles, but it’s fun to see them sing and dance, as well as shriek, squeal, and dreamily coo over their rugged boyfriends.

One little-known fact about Seven Brides for Seven Brothers is that two separate widescreen versions of the movie were originally produced, and both of them are included in this long-awaited Blu-ray release. Back in 1953 when production commenced, CinemaScope was still a novelty and just a fraction of theaters were equipped to show movies shot with the super-wide anamorphic lens. Worried MGM executives thus demanded that Donen film an alternate version of Seven Brides to ensure the musical could play in any theater and reach the largest possible audience. Such an edict, however, put enormous pressure on Donen, who needed to compose two different shots for every camera setup to accommodate the vastly different aspect ratios (2.55:1 and 1.77:1). Ironically, by the time the film premiered in the summer of 1954, almost every theater in America could project CinemaScope films, and the alternate version was never commercially shown.

Both editions work well, but the original flaunts more energy and enthusiasm, and the film’s western setting and vigorous musical numbers seem better suited to CinemaScope’s expansive canvas. The smaller ratio lends the alternate version a more intimate feel, heightening the romance and adding impact to close-ups, yet crowding is a persistent problem. Let’s face it, squeezing seven brides and seven brothers into a standard shot ain’t easy, and at times the cast visibly struggles to fit into the frame. Still, film buffs will enjoy noting and evaluating the subtle differences between the two versions.

Some musicals just get better with age, and Seven Brides for Seven Brothers is most certainly one of them. MGM may have dismissed this bold, energetic film, but audiences have embraced it for the past 65 years, and this definitive, double-disc Blu-ray edition ensures we’ll be courtin’ this classic – and remembering the late, great Stanley Donen – for many a moon.

The 2004 DVD of Seven Brides for Seven Brothers featured a lush, clean, vibrant transfer that brought the film to life like never before. That rendering raised the bar for this much-anticipated 1080p/AVC MPEG-4 transfer, which the folks at Warner Archive have knocked out of the park. The theatrical version is presented in its original aspect ratio of 2.55:1, while the alternate version is presented in its original aspect ratio of 1.77:1. Both versions flaunt a rich color palette that showcases the lush and lovely primaries and pastels. Excellent contrast and clarity enhance depth, but also call undue attention to the already glaringly artificial painted backdrops and heavy use of rear projection work. Grain intensity fluctuates (it’s especially noticeable in darker scenes), but never becomes annoyingly heavy, and some scenes appear a tad softer than others. Black levels are healthy, the white snowscapes remain crisp, and patterns resist shimmering.

The main difference between the two transfers is the amount of print damage and the impact of close-ups. The source material for the original version is spotless, while the alternate version understandably hasn’t received the same degree of TLC. It still looks quite good, but plenty of marks and scratches are evident. If you’re a close-ups fan, though, definitely check out the alternate version, which includes more tight shots that highlight the peaches-and-cream complexions of all the ladies and the guys’ bearded ruggedness.

The soundtracks are different, too. A DTS-HD Master Audio 5.1 track graces the original version, while the alternate version features a DTS-HD Master Audio 2.0 mono track. Both are clean, but of course the 5.1 track is distinguished by fuller, more robust sound, especially during the musical numbers. A wide dynamic range keeps distortion at bay, and all the dialogue and song lyrics are easy to understand. Rarely do subwoofers play a part in musicals, but the avalanche sequence offers plenty of rumbling bass, which adds welcome realism to this studio film.

If a complete alternate edition of the film isn’t enough, Warner imports all the extras (with the exception of the Stanley Donen trailer gallery) from the previous 2004 DVD edition. Director Donen contributes a curmudgeonly but entertaining commentary track, relating the film’s history and some behind-the-scenes anecdotes in a blunt, tell-it-like-it-is style. He starts by admitting, “The worst fight I ever had was to get the picture made in the way it finally was.” Donen addresses the rumor that Howard Keel sought to have him replaced before filming began, and throws some harsh words toward producer Jack Cummings, who envisioned Seven Brides for Seven Brothers as a B musical and wanted to use old songs like “Turkey in the Straw” instead of an original score. According to Donen, shooting two versions proved “an enormous undertaking,” and the additional costs prevented the company from filming on location. Painted mountain backdrops were used instead, and, in addition to lending the movie a “phony look,” so confused the birds on the set, they repeatedly crashed into the scenery! Despite lengthy gaps, it’s fun to hear Donen fling barbs at various targets. Unfortunately, he runs out of things to say about two-thirds of the way through, and resorts to chiming in with dialogue or singing along with various songs to fill out the track.

Other supplements include the breezy 2004 documentary, Sobbin’ Women: The Making of Seven Brides for Seven Brothers, which has been updated with new interviews with Jane Powell and Jacques D’Amboise for this release; a couple of vintage newsreels; a vintage short subject that salutes the marvelous MGM Studio Orchestra; and a trailer. 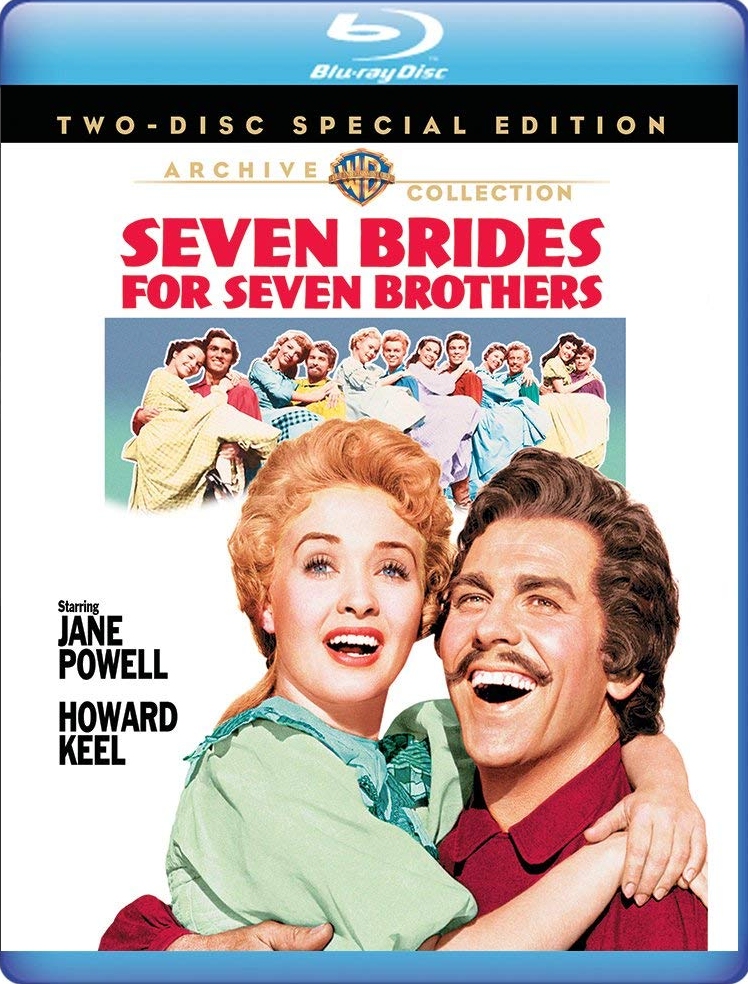