Beautiful and devastating, Le quai des brumes (Port of Shadows) stands as one of the prime examples of poetic realism and remains a classic of French cinema.

Light romantic comedies and frothy musicals largely characterized French cinema throughout the 1930s, but during that decade, a trio of gifted renegade directors – Jean Renoir, Julien Duvivier, and Marcel Carné – pioneered a revolutionary form that came to be known as poetic realism. Pépé le moko, La grande illusion, and La règle du jeu (The Rules of the Game) stand as some of the most famous and enduring examples of this captivating mini-genre, but Le quai des brumes (Port of Shadows) should not be overlooked. Like its cinematic cousins, Carné’s first foray into poetic realism combines stark, stylized imagery with fatalistic themes and emotionally complex characters to create a visually striking, deeply affecting work. Industry executives of the day may have (rightly) doubted the appeal of Carné’s dark, depressing story and the beautiful losers who populate it, but audiences responded to the movie’s depth and power both in France and abroad. Le quai des brumes didn’t receive any Oscar nominations, but the National Board of Review proclaimed it the best foreign film of 1939.

Set in the dreary seaside town of Le Havre a year or two before the start of World War II, Le quai des brumes chronicles the journey of Jean (Jean Gabin), an army deserter adrift in a world of violence and corruption. Jean seeks a fresh start and meaningful experiences to heal his battle scars, and two serendipitous events give him reason for hope. The convenient suicide of a disillusioned artist provides Jean with civilian clothes and a new identity so he can better evade police, and a chance meeting with the ravishing but entangled Nelly (Michèle Morgan) in a dilapidated roadhouse shows him that pure love can blossom in the most squalid settings. Like Victor Laszlo in Casablanca, Jean bides his time in Le Havre, waiting for a cargo ship to provide safe passage to Venezuela, where he hopes to make a fresh start and vanquish the bitter memories that haunt him.

Nelly wants to come too, but her equally complicated life intervenes. Her domineering, grotesque guardian Zabel (Michel Simon), a town merchant, keeps her on a tight leash, and she’s somehow embroiled in the mysterious disappearance of a local gangster, with whom she had a brief fling. The mob’s ringleader, Lucien (Pierre Brasseur), believes Zabel knows more about the incident than he’s telling, and he and his henchmen continually harass them both. Soon, Jean gets dragged into the fray, and now the man who abandoned the French army must ironically fight an urban war, with his freedom and his love on the line.

In its day, Le quai des brumes was a landmark film, and though it seems to have lost some of its luster over the years, it remains a devastating portrait of doomed love and existential despair. Carné’s visual style owes its roots to German Expressionism and would highly influence American film noir, which would take the cinematic world by storm just a few years later. Here, he mixes dense fog, grimy settings, and enveloping shadows with a claustrophobic tale of desperation and unrequited longing to create a work of uncommon artistry. Soulful passion (boy, do the French know to shoot love scenes!) heightened by a gut-churning sense of foreboding keeps us involved in the story, which starts slow and seems to aimlessly meander until all the narrative threads stitch together and build to a shattering climax.

Fatalism pervades the piece. From the moment they meet, it’s impossible to envision a happy ending for Jean and Nelly, yet we get swept up in their affair nonetheless and continually root for these underdogs to triumph over the evil forces that relentlessly pursue them. This lush romanticism – characterized by some of the most beautiful close-ups you’ll ever see – juxtaposed against the bleak backdrop of rundown locales, an array of seedy supporting characters, and terse yet meaningful dialogue forms the essence of poetic realism. Film noir would take it all a step further, adding a tougher tone, more cynicism, and plenty of wiseass humor, but the suppressed emotions and subdued elegance of poetic realism make it equally magnetic and irresistible. Poetic realism may be a bit kinder than noir, but it’s certainly not gentler.

Gabin is often called – with good reason – the French Bogart, but I think we really should dub Bogart the American Gabin. If truth be told, Gabin was doing Bogart years before Bogart started doing Bogart, and here he commands the screen with his tough/tender presence and brooding demeanor. He also enjoys a sultry chemistry with the radiant Morgan, who also impresses in her first major role. It’s impossible not to draw parallels between Gabin and Morgan in Le quai des brumes and Bogart and Bacall in To Have and Have Not. Morgan doesn’t ask Gabin if he knows how to whistle, but the unspoken come-on hangs in the air. Both actors file heartbreaking portrayals, and their frank love scenes make us doubly rue the stringent decency code that censored American movies of the same period.

Gabin and Morgan overshadow the rest of the cast, except for the always mesmerizing Simon, who never lets anyone upstage him. As Nelly’s over-protective guardian, he gives a finely etched performance that resonates long after the film ends. I became a big fan of Simon after recently seeing another blistering French classic, Duvivier’s Panique, and his work in Le quai des brumes only increases my admiration for him. Simon is truly one of cinema’s finest character actors, and his willingness to portray any part, no matter how eccentric or distasteful, is inspirational.

If you’re looking for something cheery and uplifting, some light escapism to help you forget your troubles, you’ll want to steer clear of Le quai des brumes, but if you appreciate cinematic artistry and embrace flawed characters and provocative themes, this searing French masterwork will stimulate your senses and remind you why you fell in love with film in the first place.

According to a text-based introduction that precedes the movie, Le quai des brumes has endured a “difficult history.” A year after it was released, the movie was banned in France for being “immoral, depressing and detrimental to young people.” Two years later, in 1941, “in a war effort to support the French film industry,” the picture was re-released, but the original negative was incomplete. For this Blu-ray restoration, “a safety positive from 1938 was used to retrieve the original cut.” After “cleaning the original negative, scanning in 2k a new safety positive and completing it with images from 1938, color grading was done using an existing print.” The result is a beautiful restoration that brings Le quai des brumes to life like never before.

Presented at a 1.37:1 aspect ratio, Le quai des brumes looks vibrant and lush in high definition. Grain is evident but well resolved, producing an image that appears wonderfully film-like. The previous Criterion DVD contained quite a bit of print damage, but that’s all been cleaned up for this Blu-ray release. Deep black levels emphasize the tale’s dark nature, but excellent shadow delineation helps us see everything in the frame. Background elements are mostly crisp, depth of field is palpable, and the extreme close-ups of Gabin and especially Morgan are flat-out gorgeous. Dissolves can be a bit rough and some scenes look as if they’ve been taken from a different source, but such imperfections only minimally tarnish this terrific restoration. 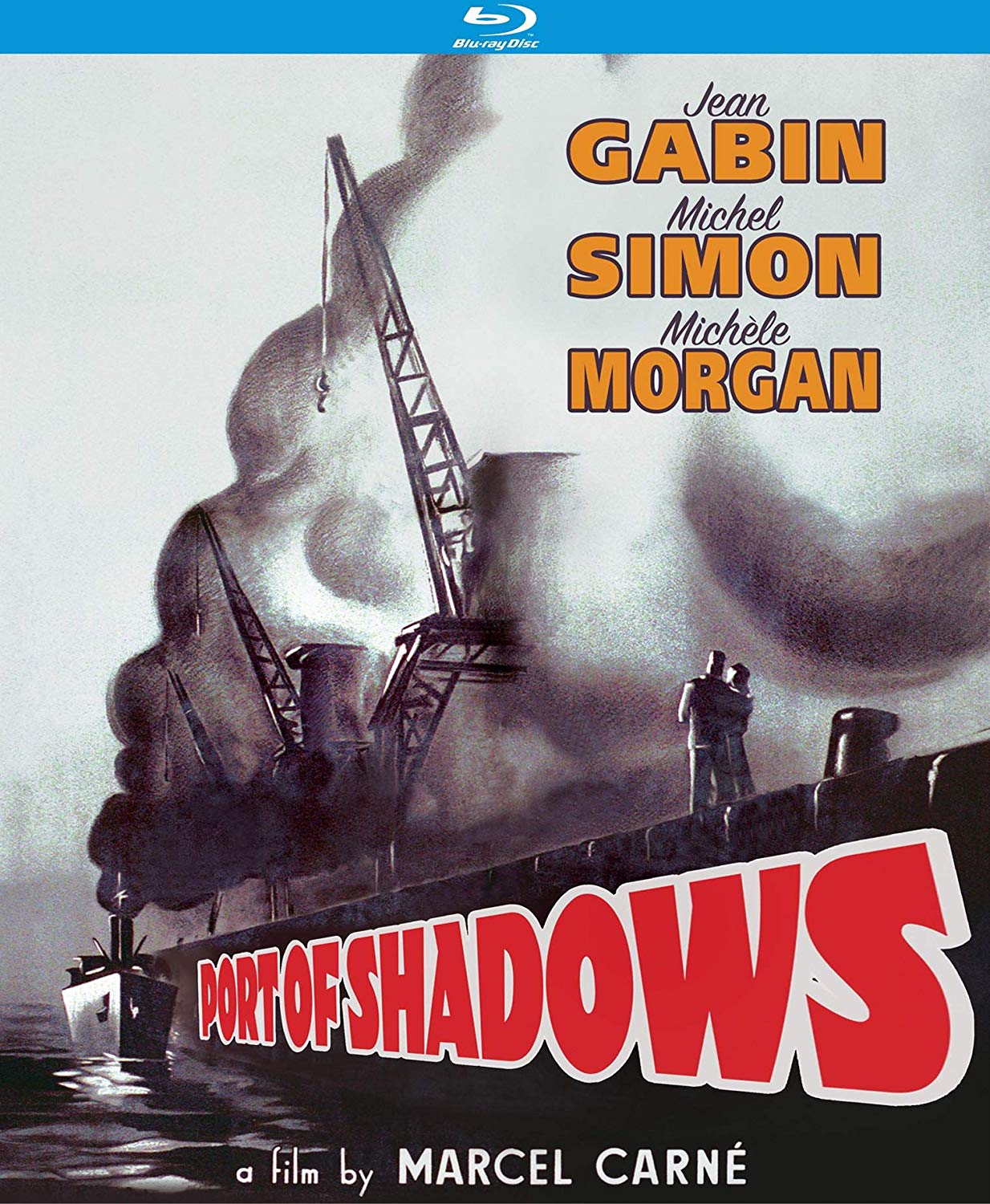