Billy Wilder’s directorial debut takes a taboo topic and whips it into a frothy, frenetic laugh riot. The Major and the Minor still raises eyebrows today, but its humor and heart – and Ginger Rogers’ sparkling performance – make it first and foremost a comedy classic.

The Major and the Minor

Billy Wilder is the master of the masquerade. No one spins madcap mix-ups with as much wit, invention, and panache – or infuses them with as much warmth and gravity – as the Oscar-winning writer/director. From penniless chorus girl Claudette Colbert passing herself off as a Hungarian baroness in Midnight to the classic cross-dressing hijinks of Tony Curtis and Jack Lemmon in Some Like It Hot, Wilder famously takes screwball premises and tempers their silliness with subtle yet substantive subtexts that make astute points about men and women, social mores, and the myriad frailties of the human condition. Whether writing with Charles Brackett or I.A.L. Diamond, Wilder always plants kernels of truth in his comedic screenplays and cultivates them with great care behind the camera.

Nobody would accuse Wilder of pussyfooting around sensitive issues, and right from the get-go in his very first directorial effort he coyly examines a humdinger. The Major and the Minor may be one of the minor films in Wilder’s major-league career, but it remains a clever, well-constructed, and flawlessly executed movie that still produces many laugh-out-loud moments. Though the story requires an enormous leap of faith and its subject matter wildly vacillates between cute and creepy (especially in this day and age), this uproarious comedy once again tells us in typical Wilder fashion that sometimes you have to pretend to be someone else to find yourself.

Susan Applegate (Ginger Rogers) is a hard-working girl who has struggled to make it in New York City for a year and a half. After weathering more than her share of hard knocks and fighting off countless wolves who view her only as a sex object, Susan has just about had it with the Big Apple. Her first house-call as a newly trained hair treatment and scalp massage specialist brings her to the swanky apartment of a lecherous middle-aged man (Robert Benchley). He invites her in and quickly tries to charm her with one of the most quoted come-ons in movie history: “Why don’t you get out of that wet coat and into a dry martini?”

His bumbling advances send an infuriated Susan over the edge and straight to Penn Station, where she hopes to hop the next train back to her blissfully boring hometown of Stevenson, Iowa. A fare increase, however, leaves her without the necessary funds to buy a ticket. In a fit of pique, she decides to scrub off her makeup, braid and ribbon her hair, don flat shoes and bobby socks, and try to pass herself off as a 12-year-old girl so she can ride the train for half fare. She’s successful at first, but the suspicious conductors soon smell a rat. A madcap chase through the train follows and forces little SuSu Applegate to seek shelter in the unlocked compartment of Major Philip Kirby (Ray Milland), a dashing officer who takes an immediate shine to the demure, frightened “adolescent.”

Major Kirby, or “Uncle Philip” as he insists SuSu call him, is on his way to Indiana to teach at a military academy run by his father-in-law-to-be. When his fiancée Pamela (Rita Johnson) discovers that he spent the night with an underage girl, innocently or not, both Philip and SuSu jump from the frying pan into the fire. Philip persuades SuSu to disembark with him to clear up the misunderstanding, and because she’s already developed a serious crush on the handsome major, she’s more than happy to oblige. Of course, taking the Indiana detour means that Susan must continue to be SuSu for a few more days, and as complications predictably pile up, the role becomes ever more difficult to portray. Not only must SuSu fend off a cadre of horny teen cadets, she’s also hell-bent on sinking the selfish, manipulative Pamela before Philip ties the knot and she’s exposed as a fraud.

A decade before Vladimir Nabokov wrote Lolita, The Major and the Minor told much the same story of a grown man who falls under the spell of a nymphet. Wilder wisely tempers the taboo subject by giving Philip a bum eye, so he can’t quite see SuSu clearly. That not only makes his burgeoning attraction to her seem less overt and lascivious, it also allows SuSu to successfully maintain her charade, at least as far as Philip is concerned. Still, it’s tough not to feel a little squeamish as Uncle Philip’s paternal feelings toward SuSu become increasingly more primal.

To his credit, the brilliant Wilder never tries to suppress the subtext. On the contrary, he embraces it, but the movie’s airy aura and abundant, inspired humor help soften any racy elements. In his 1977 biography Billy Wilder in Hollywood, author Maurice Zolotow shares this quote from the director: “We had here the first American movie about pedophilia… I was worried that audiences would be shocked by this story, but it seems that they were not.” Nor, surprisingly, were the censors. Though the arbiters at the Hays Office routinely smacked down scripts with just a hint of sexual deviance, somehow The Major and the Minor flew under their radar or over their heads. Today, it’s impossible not to pick up on the signals, especially when midway through the film Philip peers at his 12-year-old charge and exclaims with wonder, “SuSu, you’re a knockout!”

Wilder also sprinkles his screenplay with several topical references. He takes a good-natured swipe at the recently retired Greta Garbo and a more pointed jab at Charles Boyer, whose refusal to recite a Wilder speech in their previous movie, Hold Back the Dawn, inspired Wilder to become a director so he could protect and control his work. He also hilariously skewers Veronica Lake’s trendy peek-a-boo hairstyle and subtly examines the serious hot-button conflict that raged between isolationists and those who supported America’s involvement in World War II during the months following the Pearl Harbor attack. Philip belongs to the latter camp; he has applied for active duty and is itching to fight for his country. SuSu supports him, but Pamela doesn’t believe the war should concern America or her fiancé. She’s determined to keep Philip at home – and under her thumb – so she plots to sabotage his efforts.

All the performances are spot on. If you think Ginger Rogers is merely a dancing prop for Fred Astaire, think again. No other actress in Hollywood could have pulled off this difficult part with as much aplomb. Not only does Rogers play both the streetwise, cynical Susan and her sweet, cherubic alter ego SuSu, she also briefly masquerades as Susan’s mother in one scene and hilariously impersonates Pamela in another. Each portrayal is finely etched, distinct, thoughtful, and believable within the comic framework, and Rogers’ enviable timing and sense of the absurd help put over the tricky material. (Ten years later, she would again play an adult who becomes a child, this time after drinking a de-aging potion, in the side-splitting Howard Hawks farce Monkey Business. She’s equally good in that film.) Though she always will be fondly remembered for her ethereal grace and infectious vivacity on the dance floor, Rogers is first and foremost an actress, and The Major and the Minor is her film from beginning to end.

Milland is underrated as well. Like many debonair stars, his easygoing charm and devil-may-care attitude often obscure his talent. Here, he effortlessly delivers clever quips, seems to relish physical comedy, and strikes just the right light tone in his suggestive scenes with Rogers. Also brightening the film is the acerbic, delightfully wily Rita Johnson, who often resembles Eve Arden and whose promising career was sadly cut short when a hair dryer fell on her head in 1948 and caused brain damage. In other parts, Diana Lynn excels as Pamela’s savvy younger sister who instantly sees through SuSu’s disguise, and Rogers’ real-life mother, Lela Rogers, makes her only film appearance in a brief role as (who else?) Susan’s mom.

It’s difficult to fathom, but Paramount executives actually hoped The Major and the Minor would be a flop so that the blustery, egotistical Wilder would shut up about directing and humbly retreat to the writer’s den with his tail between his legs. Luckily for us, the film was a hit, and its success launched the career of one of Hollywood’s most esteemed and versatile directors. Just think… Without this saucy, scintillating film, we never would have had Double Indemnity, Sunset Boulevard, Stalag 17, Sabrina, The Seven Year Itch, Witness for the Prosecution, Some Like It Hot, The Apartment, or One, Two, Three, not to mention many other classics. That’s a legacy no movie fan would ever want to be without, and it all started with SuSu.

Arrow Academy gives The Major and the Minor the red carpet treatment, starting with a brand new restoration. According to the liner notes in the 28-page booklet that accompanies the release (first pressing only), the original 35mm camera negative was scanned in 2k resolution, then graded and fully restored. The result is a beautifully filmic 1080p/AVC MPEG-4 transfer that features a natural grain structure, excellent clarity, and a nicely varied gray scale. Blacks are rich, whites are crisp, shadow delineation is quite good, and the close-ups of Rogers – especially those of her as a 12-year-old without any makeup – are stunning. Although contrast runs a bit hot for my taste, the picture still looks well balanced and fresh. Some of the process shots look a little rough, but they were most likely poorly executed in the first place. Best of all, the source material has been scrubbed clean, so no marks or scratches intrude.

The uncompressed PCM mono track supplies clear, well-modulated sound. While some surface noise is present, it never becomes distracting. Sonic accents like Rogers running her fingers across a balloon to produce an annoying squeak are wonderfully distinct, and all the witty Wilder/Brackett dialogue is easy to comprehend. This isn’t a particularly active track, but it does its job well.

A healthy collection of supplements enhances the release. If you purchase the first pressing of The Major and the Minor, you’ll get a lovely 28-page collector’s booklet printed on high-quality glossy paper that includes an essay by film historian Ronald Bergen, several marvelous photographs, a full-color reproduction of the movie’s poster art, a cast and crew listing, and restoration notes. That’s a nice bonus. All editions include an audio commentary by film scholar Adrian Martin, a newly filmed video appreciation of the movie by critic Neil Sinyard, a very interesting 1975 audio interview with Ray Milland, a 1943 radio adaptation of the movie featuring Rogers and Milland, a photo gallery comprised of 25 images (12 in color) that include scene and publicity stills and promo materials, the original theatrical trailer, and reversible cover art. 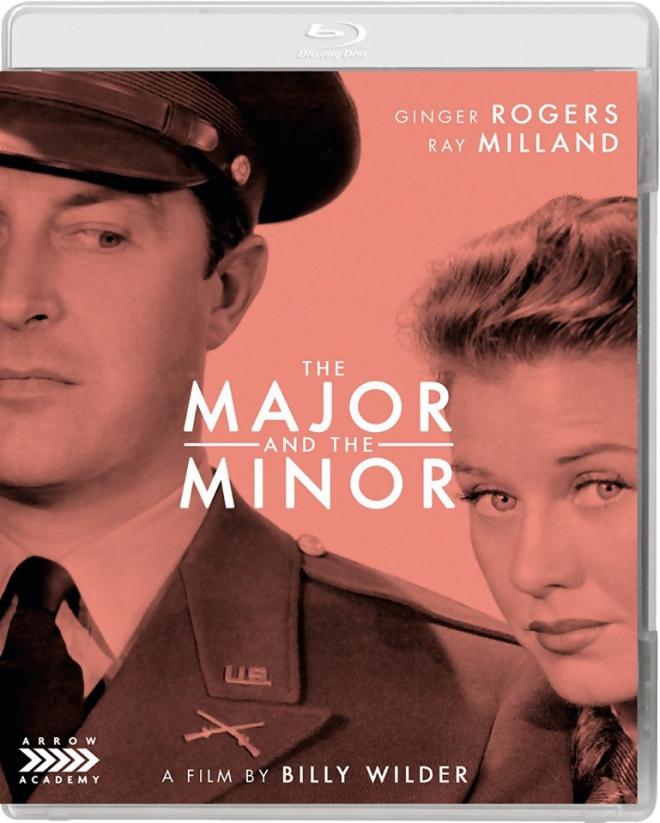 The Major and the Minor Blu-ray – Buy at Amazon