The 1966 version of Madame X may be a tearjerker on steroids, but don’t judge this emotional tale of motherly love by the copious amounts of Kleenex required to get through it. Lana Turner’s last hurrah is surprisingly elegant and engrossing, and far better than it has any right to be.

Lana Turner suffered through so much drama in her personal life, including seven marriages, numerous affairs, and arguably the most sensational scandal in Hollywood history. Even her most rigorous movie roles must have seemed like cakewalks by comparison. Yet if you believe the press, Turner’s finest performance didn’t take place on the screen, but rather on the witness stand in a real-life courtroom during the inquest stemming from the murder of her mobster lover, Johnny Stompanato, in 1958. When she saw the frightening Stompanato about to kill her mom during a violent domestic dispute, Turner’s teenage daughter Cheryl Crane grabbed a kitchen knife and stabbed the abusive thug in the gut… at least that’s what Turner tearfully told the authorities. Who actually wielded the deadly weapon – mother or daughter – remains one of Hollywood’s great mysteries, but the titillating details of the tawdry liaison and its bloody conclusion made the racy themes of Turner’s current picture at the time, Peyton Place, seem tame.

The cause célèbre threatened to derail Turner’s career, but like a white knight, producer Ross Hunter (famous for glossy melodramas like All That Heaven Allows and the original Airport) swooped in and rescued the sexy blonde actress. Their subsequent professional partnership would prove lucrative for both parties, yielding the enormously successful remake of Imitation of Life in 1959, the noir-ish thriller Portrait in Black in 1960 (look for a review of that disc in this space in the coming weeks), and the remake of another classic soap opera, Madame X, in 1966. Though the latter film was based upon a play written in 1908 (and follows it fairly faithfully), the material contains enough eerie similarities to the Stompanato incident to add an extra element of intrigue to the sudsy tale, which remarkably stands on its own as a well-made, beautifully performed tearjerker. (Oh what must have been going through Lana’s mind as she acted out so many of the movie’s scenes. No wonder she was able to turn on the waterworks so easily.)

One of the warhorses in the four-handkerchief, mother-love genre (it competes with Stella Dallas for most tissue grabs per scene), Madame X was a reliable go-to woman’s picture during Hollywood’s Golden Age. Turner’s take was the third go-round in 37 years for the story. Ruth Chatterton tackled the title role in the first version in 1929, while Gladys George took a memorable stab at the part a mere eight years later in 1937. Some savvy updating by writer Jean Holloway effortlessly brings the timeworn drama up to date. The plot doesn’t score very highly on the believability scale (few tragic yarns like this ever do), but its emotional rating is through the roof. Turner’s tear-stained face is a staple in practically every scene, which makes it difficult to keep from getting a little misty-eyed yourself. Trust me.

When filthy rich State Department official Clay Anderson (John Forsythe) brings his new bride Holly Parker (Turner) home to his Connecticut mansion, the lavish lifestyle bowls over the wide-eyed, wrong-side-of-the-tracks ex-shopgirl. (The scene uncannily foreshadows an almost identical sequence from the first season of the iconic primetime soap Dynasty in which Blake Carrington, also played by Forsythe, introduces his new bride and ex-secretary Krystle Jennings [Linda Evans] to his massive Denver estate. [Yes, I watched the show religiously. Don’t judge.]) Clay’s snobbish, calculating, and meddlesome mother, Estelle (Constance Bennett), disapproves of the union, fearing it will stymie Clay’s rising political star. Estelle believes Holly is nothing more than a money-grubbing social climber who’s unfit to be a society wife, but Holly, who loves her husband dearly and soon bears him an adorable son, rises to the challenge, much to Estelle’s chagrin.

Unfortunately, Clay’s continual, lengthy diplomatic trips put a strain on their marriage. Lonely and resentful, Holly turns to dapper playboy Phil Benton (Ricardo Montalban) for comfort, but when she abruptly breaks off their affair after reconciling with Clay, a violent argument ensues and Phil ends up dead. His death was an accident, but a frazzled and distraught Holly doesn’t notify the police and stupidly leaves her scarf in Phil’s apartment, leading the private detective Estelle conveniently hired to follow Holly to believe she killed Phil in cold blood. With no alibi and the prospect of a salacious murder trial that would certainly quash Clay’s career and destroy her marriage, Holly reluctantly bows to Estelle’s wishes and agrees to abandon her family… forever. Per Estelle’s orders, Holly fakes her own death in a boating accident and flees to Europe, where Estelle promises to send her a monthly stipend for the rest of her life.

Without giving too much else away, suffice it to say that the devastated Holly soon hits the skids, drowning her sorrows in alcohol and blocking out her shame with casual sex. Years pass. Though disheveled and disreputable, she still loves her husband and especially her son, and kills a man to protect their reputations. At her trial, she refuses to defend herself or reveal her true identity, referring to herself merely as X. (The press dubs her Madame X.) The court appoints a public defender on her behalf, and who should he be but… wait for it… her now grown son (!), Clay Jr. (Keir Dullea). He doesn’t know that she’s his mother (though he feels an instant connection to her) and she doesn’t know that he’s her son. It’s all wildly improbable, laughably over the top, and yet sad beyond belief! I don’t need to tell you it ends in a torrent of tears… and if you think the ridiculousness of its only-in-the-movies climax will make you immune to all the raw emotion, you’re not only bitterly mistaken, but very naïve. Keep that Kleenex handy!

I thought I was above Madame X. I had seen it decades ago, so I knew the story and was poised to label the film a prime example of stereotypical, manipulative, lowbrow Hollywood drivel. I’m not a macho guy (I know that’s not a news flash after I copped to watching Dynasty), but I’m surely tough enough not to be sucked into this sob-sister saga of maternal devotion and sacrifice! Yes, I shed tears regularly at the movies… but I cry at good movies, not sappy schlock that’s meticulously designed to extract water from stone.

Well, I’ve got news for you. Madame X is a good movie, and hard as I tried, I couldn’t resist it. Produced in the grand Hollywood tradition, director David Lowell Rich’s film is slick, lush, and trimmed with enough artifice to sufficiently complement the outlandish narrative. Sumptuous sets, gorgeous photography, and a melodramatic score enhance the soapy mood, and at the center of it all is Turner, dripping in jewels and draped in Jean-Louis finery during the film’s first half, and drunk, dowdy, and destitute during its second. Her hair goes from blonde to brunette to red to a deathly black over the course of 100 minutes as she puts herself through the emotional wringer and files a truly magnificent performance.

At age 45, Turner had reached the end of her 25-year reign as a sex symbol, but like Marilyn Monroe, her alluring persona always overshadowed her considerable talent. Madame X would be Turner’s last feature as a leading lady and she attacks the part with admirable vigor. Almost every scene requires her to break down in tears, and yet the emotion never feels forced or manufactured. Turner was no Bette Davis or Barbara Stanwyck, but she conveyed a naturalness and sincerity that helped us look past her beauty and appreciate her ability as an actress. Rarely did she go the no-glamour route, but her willingness to embrace it during the movie’s final stages is quite striking, and proves her commitment to her craft. Turner absolutely deserved an Oscar nomination for her performance, but she was snubbed, probably because the conservative Academy had enough of her off-screen antics and didn’t want to dredge up the Stompanato affair.

Turner carries the film’s substantial weight on her shoulders, but a top-flight supporting cast helps ease the burden. It’s impossible to divorce Forsythe from his future role as Blake Carrington 15 years later, but he’s a strong, sturdy presence, while Constance Bennett, in her final film role (she died before the movie was released), is deliciously snooty and bitchy as Estelle. In other roles, Ricardo Montalban oozes Latin charm as Holly’s doomed lover; Burgess Meredith pulls out all the stops as a down-and-out con man who sinks his claws into Holly; and Keir Dullea, who two short years later would star in Stanley Kubrick’s classic 2001: A Space Odyssey, is especially moving as Clay Jr. The picture’s success hinges on Dullea’s crucial scenes with Turner during the tale’s final minutes, and both actors admirably finesse the syrupy sentimentality and save Madame X from devolving into a maudlin mess.

The woman’s picture is a lost art, but Madame X proves that if produced with care and respect, even the most lachrymose drama can make a stellar film that appeals to a wide audience. Everyone needs a good cry now and then, and Madame X serves up catharsis like few other movies.

The absolutely stunning 1080p/AVC MPEG-4 transfer from Kino lights up the screen with terrific contrast, clarity, shadow delineation, and plenty of bold color. Presented in its original widescreen aspect ratio of 1.85:1, Madame X bursts with lush hues that add both vibrancy and subtle shadings to the canvas. Reds, yellows, and oranges especially impress, but delicate pastels like pink and lavender also catch the eye. Cinematographer Russell Metty, who worked with such esteemed directors as Stanley Kubrick (Spartacus), Orson Welles (Touch of Evil), and Douglas Sirk (All That Heaven Allows), among many others throughout his distinguished career, lovingly photographs Turner, and his close-ups of her consistently tear-stained face are crisply rendered here. Grain is evident but nicely integrated (except for a couple of establishing shots that look distractingly noisy), blacks are deep and rich, and only an occasional damaged frame disrupts this silky smooth presentation.

The DTS-HD Master Audio mono soundtrack showcases Frank Skinner’s string-laden musical score to perfection. A wide dynamic range handles all of its sweeping crescendos and melodramatic cadences without any distortion, and no age-related surface noise intrudes. Dialogue is well prioritized and easy to understand, too.

The only supplements are an audio commentary with film historian Lee Gambin and Dr. Elaine Ross and the film’s original theatrical trailer. 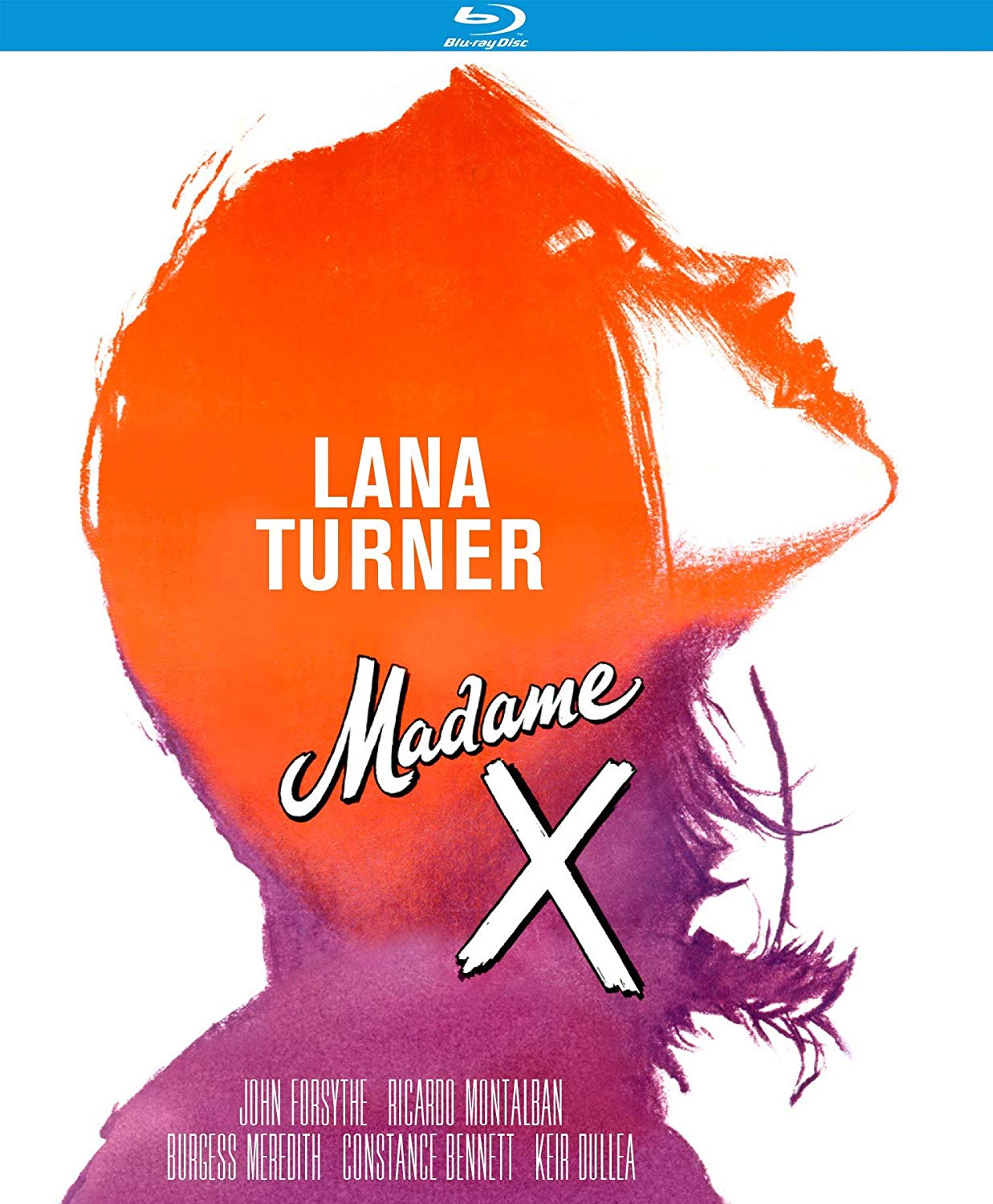