A team of researchers came to Canada to study the native lynx population. Little did they know that they themselves were being studied by… the Snow Beast!

If you’re expecting me to follow that up with a rambling, unnecessarily long plot synopsis, sorry! That’s pretty much it. 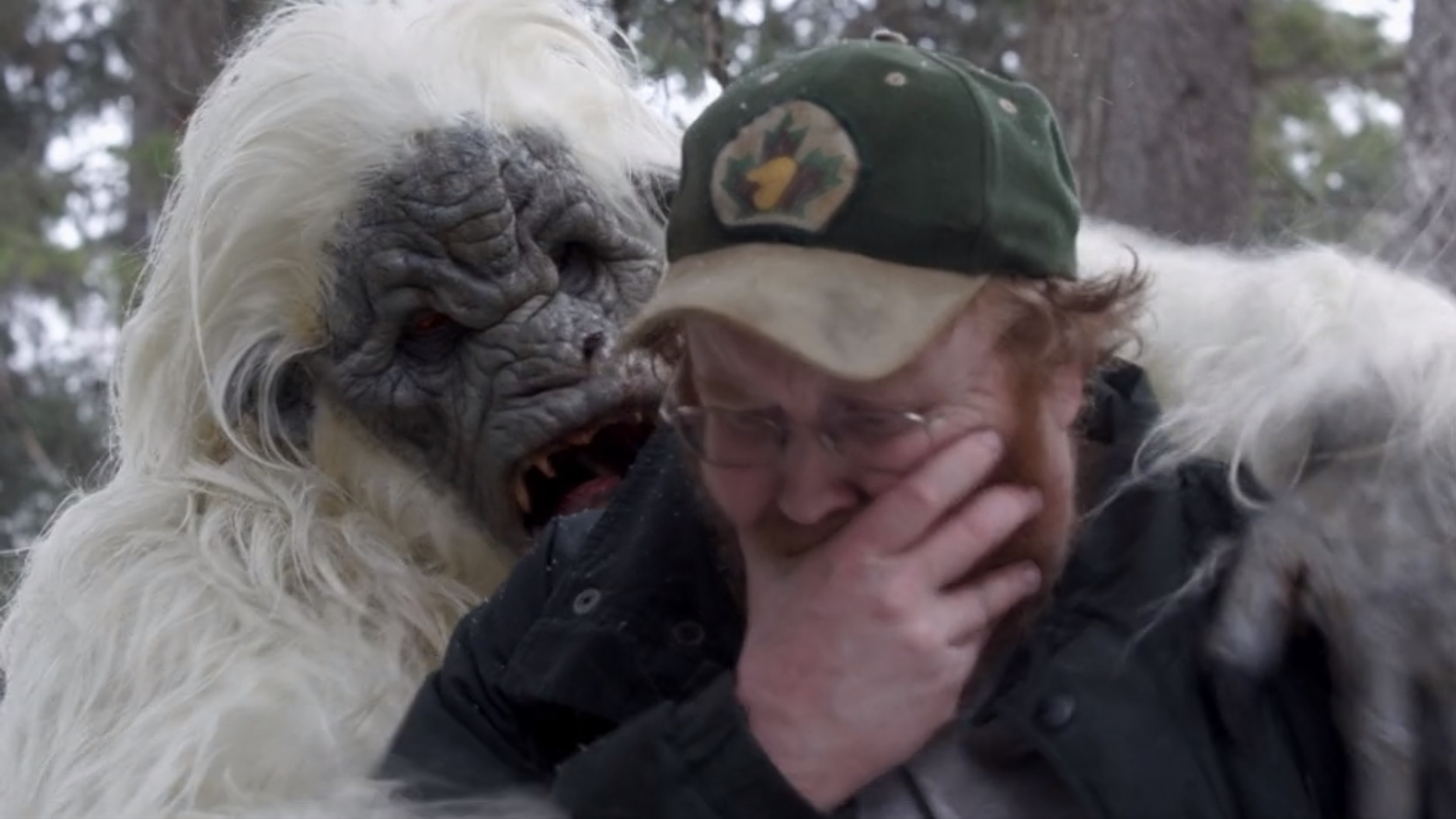 Eh, I guess I could touch on the Daddy/daughter drama. You see, lead researcher Jim (former Duke boy John Schneider) has dragged his rebellious kid, Emmy (Danielle C. Ryan), to the Great White North too. Mom took off a while back, and Emmy can’t stop lashing out as a result. She was even (gulp!) expelled from high school! Maybe Emmy isn’t getting a formal education right now, but I can’t shake the feeling that she’s about to learn a lot about family and responsibility. And snow beasts.

Naturally, there’s a will-they/won’t-they between Jimbo and one of his fellow researchers from The University (Kari Hawker-Diaz). I guess I could mention Rob (Paul D. Hunt), the team’s resident tech guy and statistics-slash-Yeti enthusiast. Oh, plus there are a couple of Canadian park rangers (Jason London and Dale Thomas). None of them really get their own B-plots, though, so who cares? They’re all just around to be devoured – or, at the very least, almost eaten – by the titular snow beast. 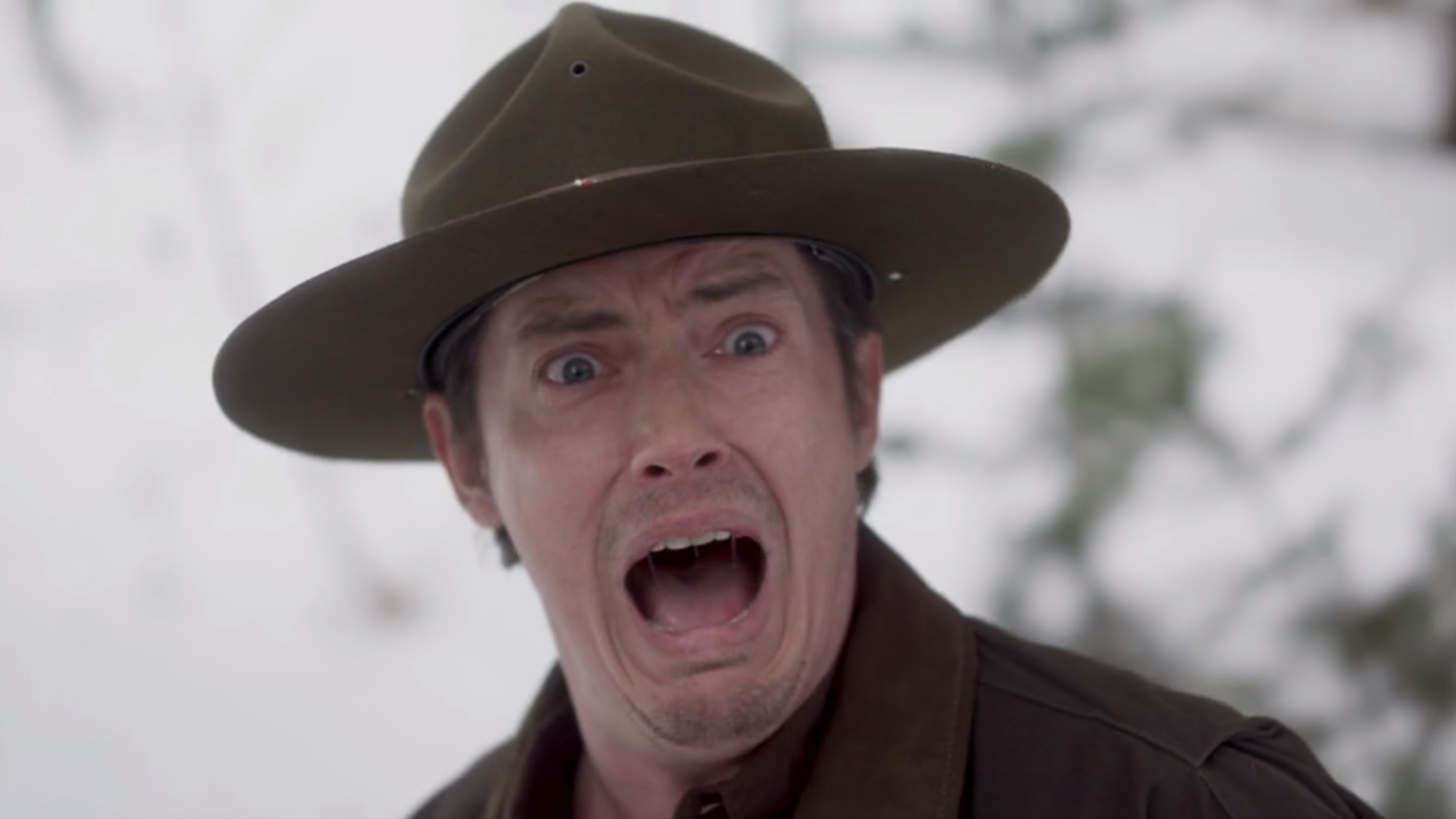 Snow Beast is about as slapdash and “Wait, what?!” as that rubbery, off-brand Wampa suit. I mean, a snow beast siege sequence climaxes in a chest of drawers gingerly rocking back and forth. The rest of the team is surprisingly reluctant to accept Rob’s Yeti theory, even after they’ve seen the monster with their own eyes. They acknowledge the creature’s existence, but they’re digging their feet into the ground hard about semantics. Later, a snowmobile more or less idles into a tree, and… well, this happens: 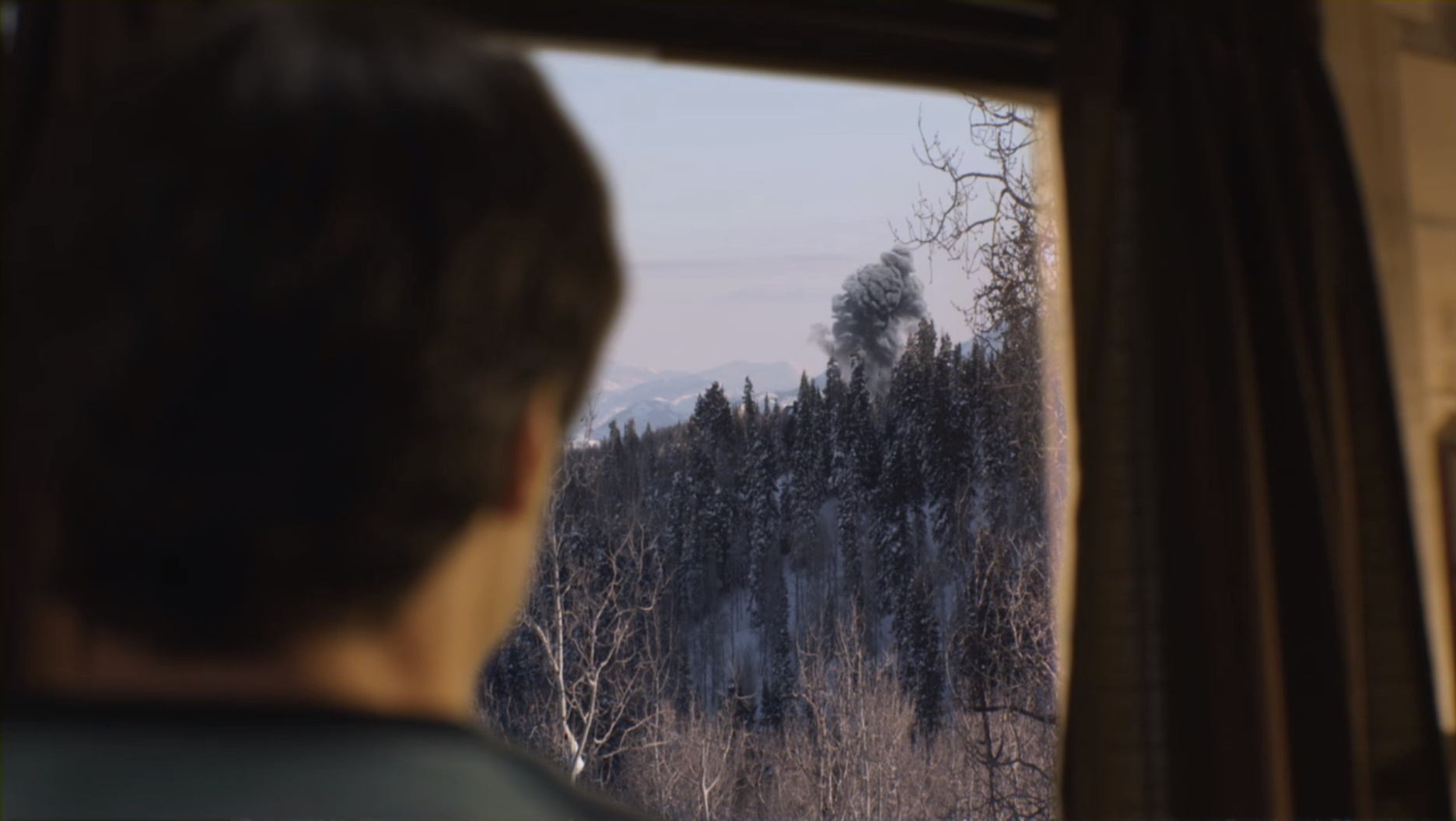 Ranger Barry delivers a confusingly ominous speech about the rescue teams searching for missing snowboarders. “The places that they’re searching barely intersect the places where people were last seen.” ??? I get that you’re a hopelessly remote resort community, but we’re talking Missing Snowboarder 101 here.

After falling a couple dozen feet into the not-a-Wampa lair, Rob understandably groans, “Oh, that hurt”. Jim comforts him by snickering, “Yeah, I bet it did!”, poking fun at the guy to his daughter, and then cracking wise about how there’s probably not a ladder down there. No, but there are bloodstained human bones, so cool it, Bo Duke! But, I dunno, Rob also drones on about how predators are deadly silent to best stalk their prey, and yet the first time we see the friggin’ snow beast, he’s growling and roaring at a snowboarder who has no idea there’s a monster lurking behind the trees. 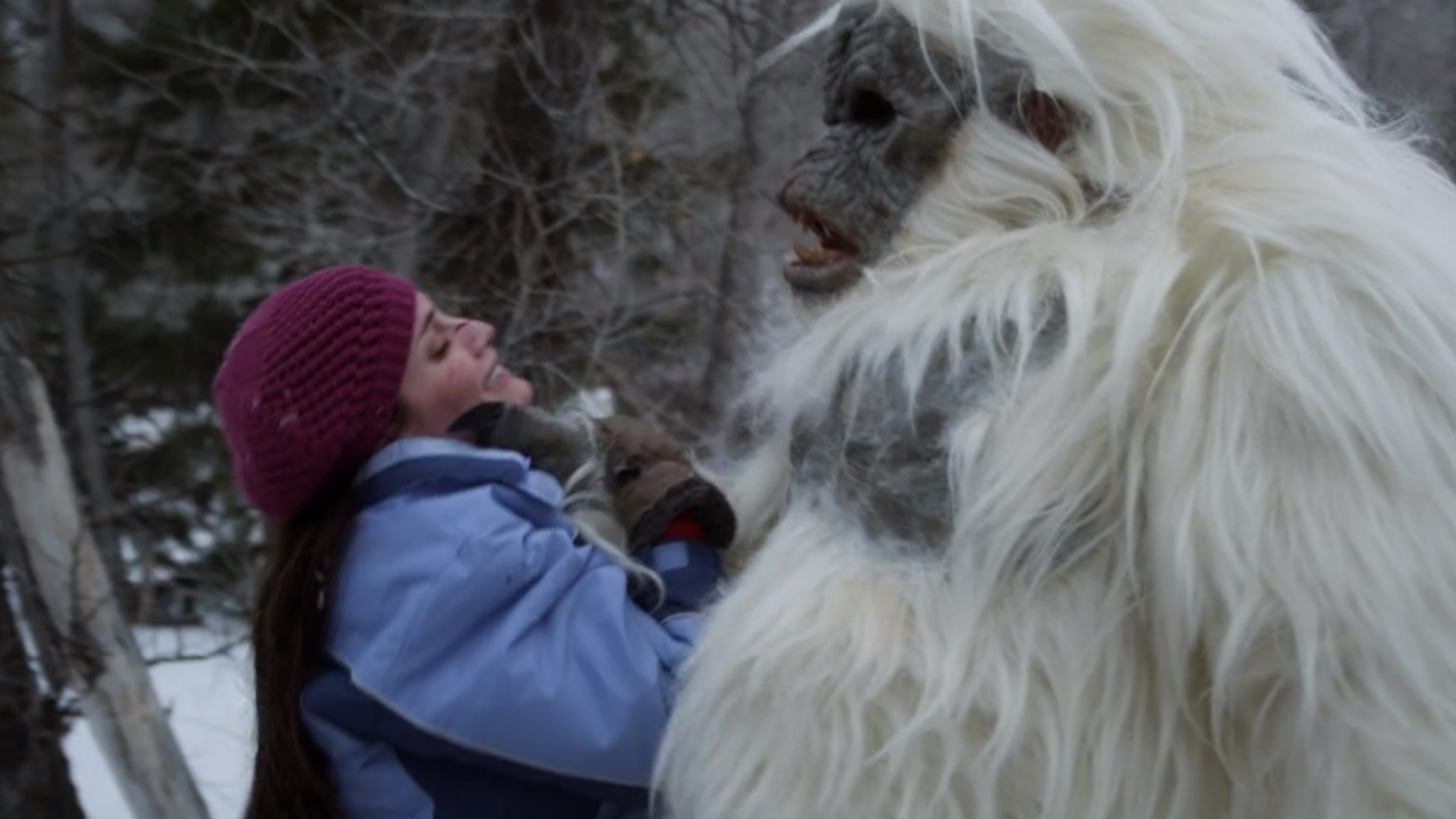 Sure, Snow Beast doesn’t bother to develop most of its subplots. Internal logic isn’t too much of a thing. There isn’t a cliché it’s unwilling to latch onto like grim death, whether it’s a kid hiding under a blanket in a truck bed or opening the blinds to the sight of “Aaaaah, snow beast!” Still, there’s just something so gosh-darn earnest about Snow Beast that I can’t help but love it. It’s heartening to see that this is a dude in a suit rather than a purely CG monster. (Some of the very light gore is digital, though.) The body count stands somewhere around seven, which ain’t bad.

Snow Beast is even a monster movie for the whole family! Kind of. Except for a bit of blood and the creature gnawing on a severed limb at one point. 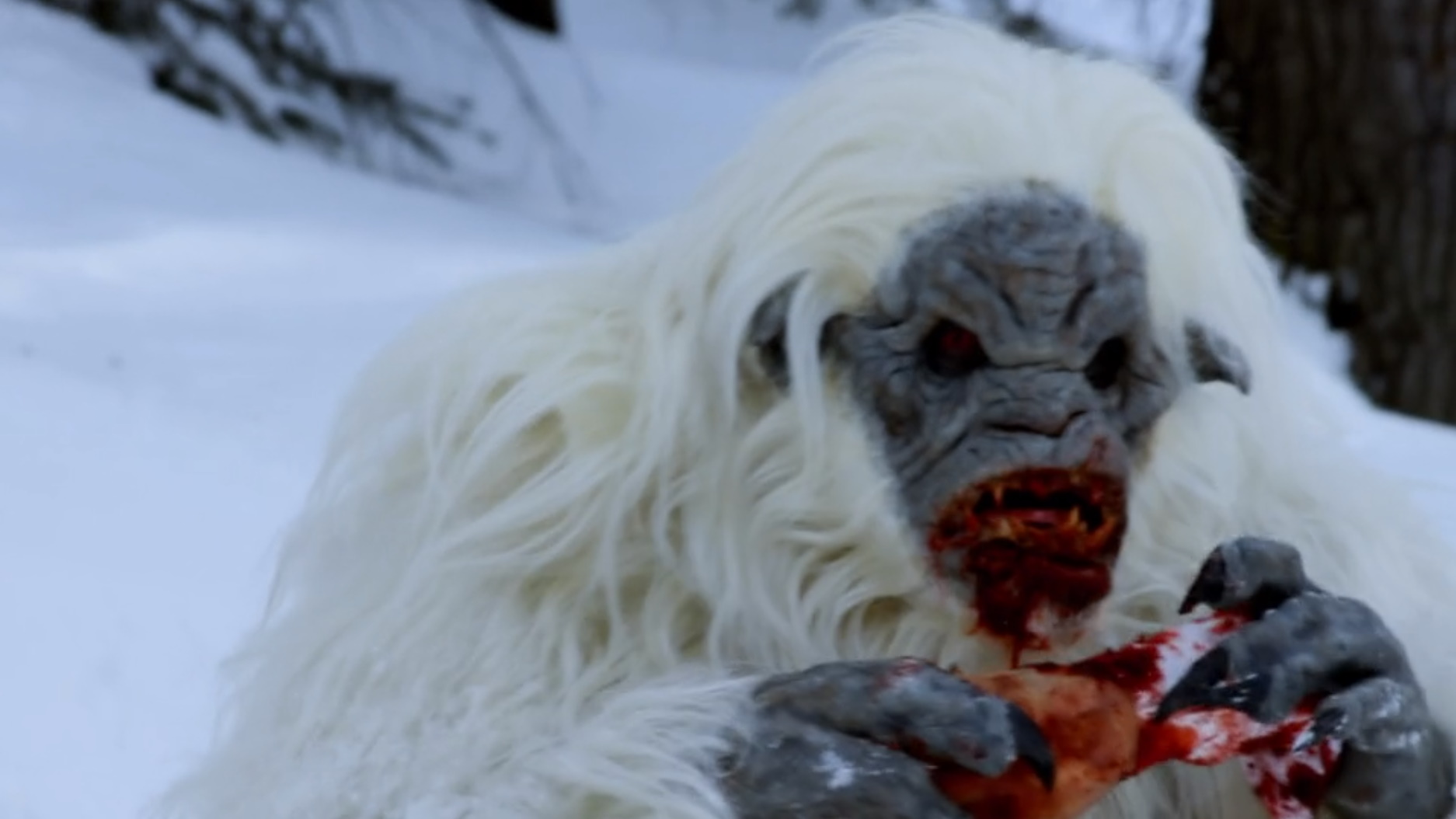 The violence and effects overall are tame enough to make it on basic cable uncut. I don’t remember hearing any naughty words, and it’s completely devoid of any nudity or sex. As dearly as I cherish exploitation, something as tame as Snow Beast is kind of a nice change of pace. Besides, it’s the only movie I’ve reviewed for this column where microwave popcorn and leftover lasagna are tossed onto a trashcan lid as Yeti-bait, and it’s the first time I’ve seen parallels drawn between disappearing Canadian lynxes and an absentee mother. 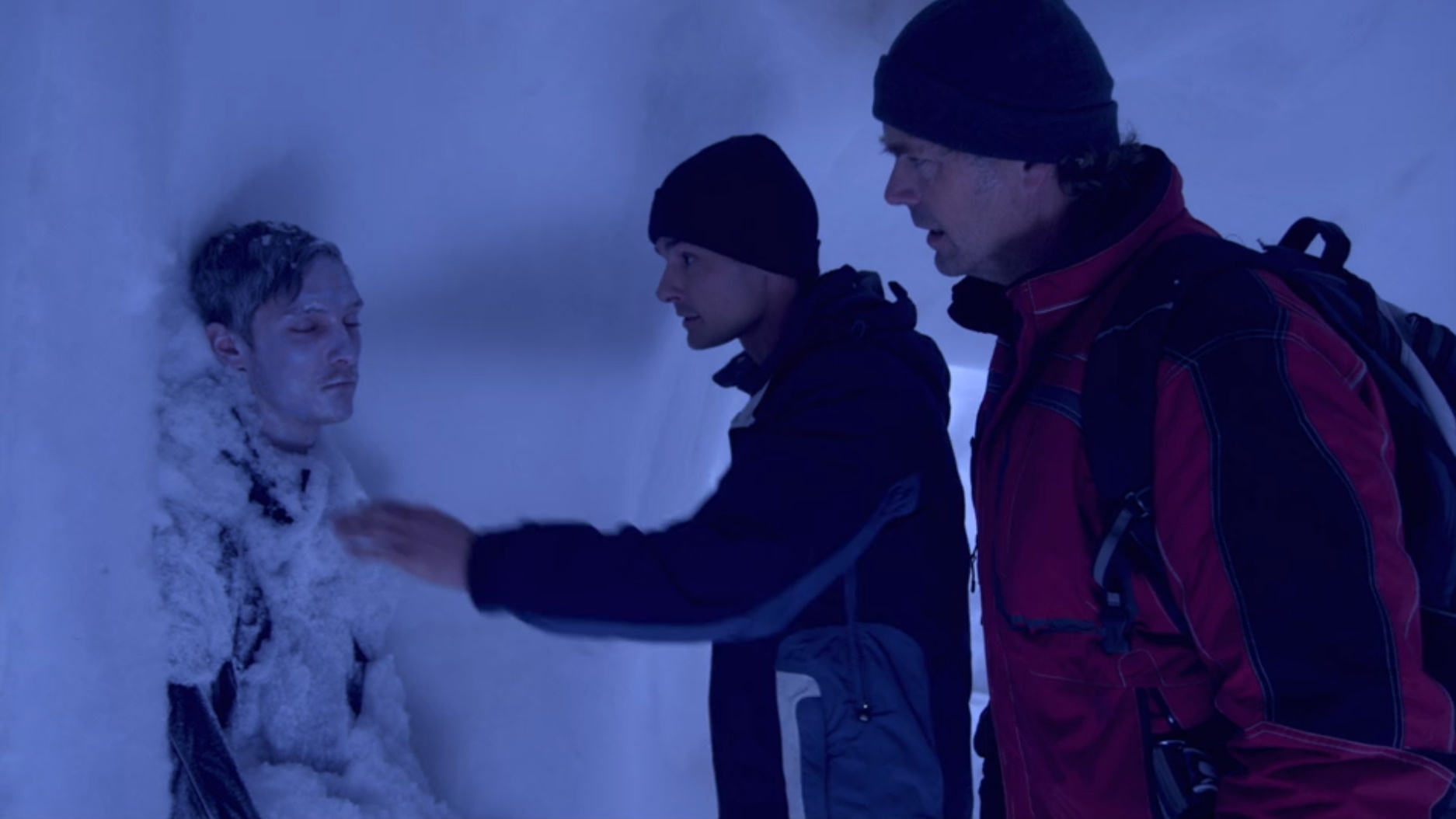 Let’s say, hypothetically, that you’re aching for a copy of Snow Beast to call your very own. There’s the plain ol’ DVD that SunWorld Pictures put out on these shores. If you’re feeling squirrelly, you could import the German Blu-ray release called Snow Beast: Überlebenist alles. Such is the power of the snow beast that there’s not a word in German for it!