A middle-aged, sex-starved Joan Crawford falls for hunky, often shirtless Jeff Chandler, but there’s a good chance he’s really a killer who preys on rich, lonely older women in Female on the Beach. (How’s that for a title!) For those who like their Crawford dripping in high-camp splendor, this is your ticket.

Female on the Beach

Decades before the Lifetime cable network and Ashley Judd began cranking out women-in-jeopardy movies as fast as bartenders could make cosmos for Sarah Jessica Parker in Sex and the City, the hardest working star in Hollywood was helping to create the genre. Joan Crawford headlined a few such vehicles in the 1950s, the most provocative of which is Female on the Beach, a so-trashy-it’s-good mixture of romance, mystery, murder, and noir that’s tailor-made to suit Crawford’s hard-edged, defiant persona.

Crawford is a fascinating Hollywood figure, and her dogged, at times desperate determination to remain a star at any cost over the course of several decades has been well documented. By the 1950s, her lofty stature had started to slip, and she knew all too well that her days as a glamorous leading lady were numbered. The woman who once proclaimed she’d happily play Wallace Beery’s grandmother if it was a good part now went to extreme lengths to preserve the last vestiges of her youth. Like many actresses then and now, Crawford bitterly decried Tinseltown’s obsession with young starlets and bemoaned the dearth of dimensional roles for “mature” women. Yet instead of retiring quietly into Hollywood’s sweet good night like Irene Dunne and Claudette Colbert, the stubborn Crawford stuck around, constantly reinventing herself, and fighting tooth-and-nail for juicy parts.

Sadly, the pickings were pretty slim. In what must have been a weak moment, she agreed to star in Female on the Beach. The melodramatic material is certainly beneath an Oscar winner and three-time Best Actress nominee, but it satisfied Crawford’s craving for exposure. And expose herself she does, not just emotionally with her scenery-chewing performance, but by parading around in a chic, often very revealing wardrobe that leaves little of the almost 50-year-old Crawford’s still svelte figure to the imagination. She also perpetuates the carefully honed new image that would forever change the public’s perception of her.

Female on the Beach falls smack-dab in the middle of Crawford’s ball-breaking butch period, in which she delights in castrating weaker, usually younger men and reveling in their subsequent servitude. With her closely cropped hair, bushy eyebrows, shoulder-padded gowns, ample chest, and aggressive attitude, she often resembles a linebacker in drag eager to verbally tackle anyone who challenges her. Occasionally, she gets physical. No Crawford film is complete without her flinging a freshly made cocktail in her lover’s face and/or slapping an arrogant smirk off his lips, and Female on the Beach is no exception.

The night after Eloise Crandall (Judith Evelyn), a distraught, drunken spinster, crashes through the wooden railing of a posh beach house and falls to her death on the rocks below, the home’s imperious owner arrives to spruce up the place before selling it. Lynn Markham (Crawford) is a rich, stylish widow of a certain age who, just like Greta Garbo, only wants to be left alone. Much to her chagrin, her beach house is like Grand Central Station. The pert, busybody realtor (Jan Sterling) keeps intruding, as does a nosy police detective (Charles Drake) and the hunky, grizzled Drummond “Drummy” Hall (Jeff Chandler), the dead spinster’s boy toy and a Kato Kaelin-like beach bum who almost instantly starts putting the moves on Lynn. Drummy’s sleazy reputation as a smooth-talking gigolo is well known, and he lives with a couple of charming yet ruthless grifters, Osbert and Queenie Sorenson (Cecil Kellaway and Natalie Schaefer), who prey on his insecurities, cunningly manipulate him, and exploit his womanizing skills. With nefarious relish, they routinely feed Drummy to the beach’s cougar du jour. Before long, he’s in her bed and draining her bank account, much to their greedy glee.

The icy Lynn, though, isn’t quite so easy a mark. At first, she rudely rebuffs Drummy’s advances, but soon her aching loneliness gets the better of her and she ravenously takes his bait. Drummy reawakens Lynn’s long-dormant sexuality, and like the parade of women who preceded her, she becomes physically and emotionally obsessed with him. Seeds of suspicion, however, quickly creep into their stormy relationship and begin to torture Lynn. What are Drummy’s dark secrets? Is he an opportunist or a shining white knight? Was he involved in the spinster’s death? Is he prepping Lynn for a similar demise?

The burly Chandler, who spends most of the film’s first half shirtless, is a dozen years younger than Crawford, but his chiseled features, salt-and-pepper crew cut, hairy Popeye forearms, and muscular physique make him one of the few Crawford co-stars of the period who can believably stand up to her. (It’s amusing to watch him constantly suck in his gut, even when lying down, just so he can thrust out and accentuate his he-man chest.) She still routinely cuts his character down to size (it wouldn’t be a Crawford picture if she couldn’t), but the emasculation isn’t as brazen and severe as usual.

The direction by Joseph Pevney is competent. Withering, deliciously delivered Crawford put-downs pepper the screenplay. It’s ironic (but not surprising, given the time period) that a film called Female on the Beach was written by three men. Although they often paint a convincing portrait of a strong, independent woman, their depiction of Lynn’s sexually aggressive antics and the despair that devours Drummy’s former flames are the stuff of male fantasy. They also can’t resist tossing in shamelessly chauvinistic lines like, “A woman’s no good to a man unless she’s a little afraid of him,” which may have played okay in 1955, but are outrageously out-of-touch today.

When Crawford was good, she rivaled Hollywood’s finest actresses. Love her or loathe her, she will always be one of the industry’s giants. (It’s too bad she’s become a bit of a caricature, but she’s more than a little responsible – on screen and off – for her legacy.) This isn’t her best work by far, but she dutifully checks all the requisite Crawford boxes in her by-the-numbers portrayal. Who cares if Female on the Beach is trash? It gives Crawford another chance to strut her stuff and provides solid proof of why she’s such an enduring star. And for Joan Crawford, that was always the most important thing.

Though its original aspect ratio is listed as 1.85:1 on IMDb, Female on the Beach is presented here in a slightly wider ratio of 2.0:1. Kino’s 1080p/AVC MPEG-4 transfer surely improves upon previous DVD editions of the film, but it’s too bad the studio didn’t lavish a little more care upon it. From the opening frames, print damage is an issue. While the flurry of marks and scratches that sully the main title sequence soon subside, intermittent imperfections occasionally mar the viewing experience. Grain levels fluctuate somewhat and a bit of blooming diffuses some details, but the overall image exhibits a nice sheen. Lush black levels heighten the story’s noir flavor, whites are crisp, and close-ups render fine facial features well. Female on the Beach is far from one of Crawford’s best films, but I expected a little more from this transfer.

The DTS-HD Master Audio 2.0 mono track supplies clear, well-modulated sound. A wide dynamic range handles all the highs and lows without any distortion. Any age-related hiss, pops, or crackle have been erased. The musical score sounds rich and full, and all the dialogue is easy to comprehend.

In addition to two audio commentaries – a solo track from film historian Kat Ellinger and a discussion between film historian David Del Valle and filmmaker David DeCateau – Kino includes an extensive animated image gallery that runs almost 16 minutes and features dozens upon dozens of scene stills, behind-the scenes shots, wardrobe and makeup tests, poster art, and other promotional photos. It’s quite a collection well worth perusing. The film’s original theatrical trailer, as well as a few other previews for Crawford and Chandler releases available from Kino, complete the extras package. 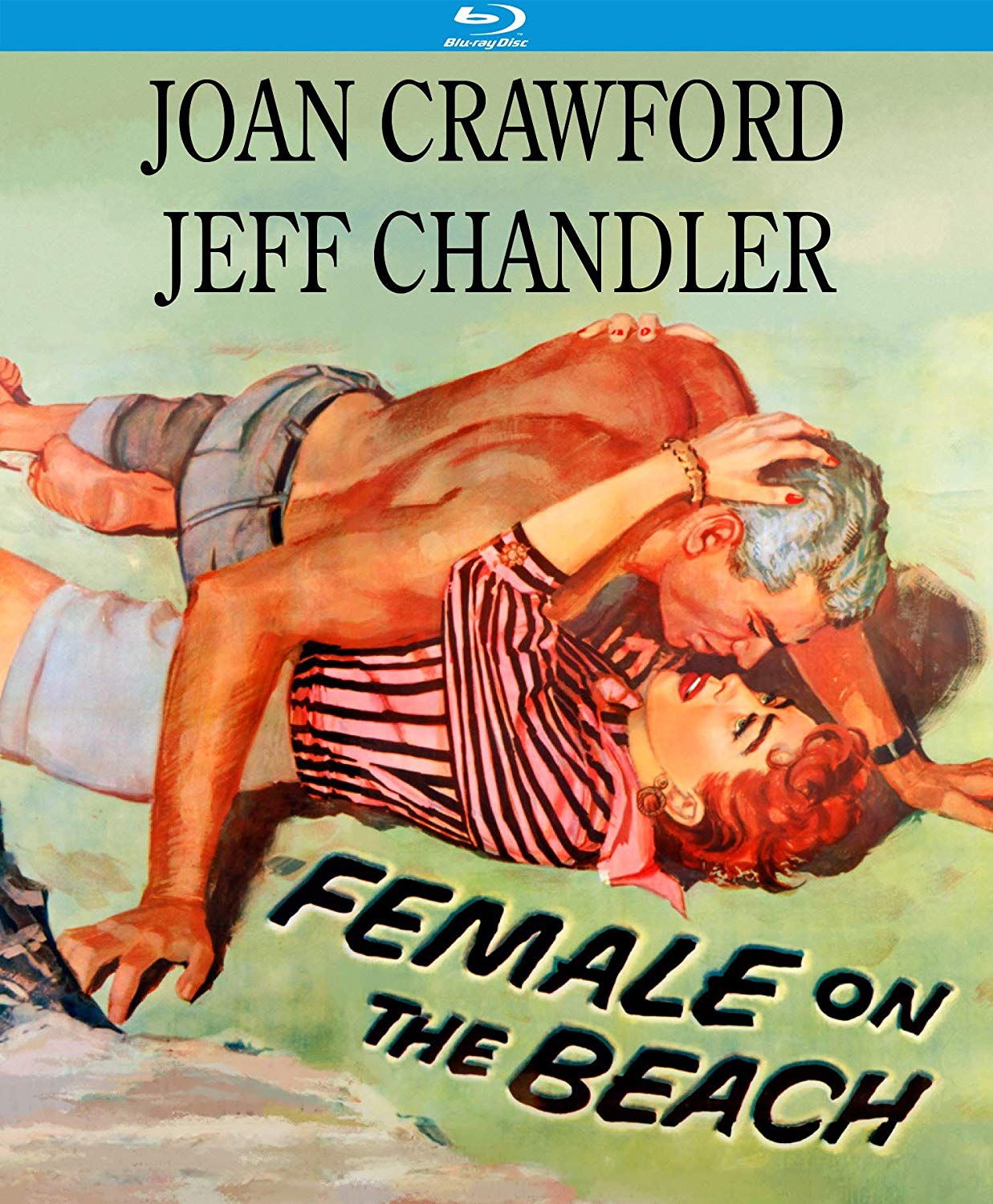 Female on the Beach Blu-ray – Buy at Amazon