We home theater fans have a habit of constantly replacing or upgrading our electronic equipment with the latest and greatest new models, always in the hopes of eking out some small bit of performance improvement. On the other hand, some pieces of gear tend to hang around longer than others. For this week’s Roundtable, we take a look at the oldest equipment in our home theaters that we either haven’t gotten around to replacing, or don’t feel the need to.

That’s easy; I’m the oldest piece of gear in my home theater. (Hardy har har… *slaps knee*) Seriously, though, the one piece of equipment that has lasted me longest is a Mitsubishi VCR from the early ’90s. It replaced a bulky, top-loading model from Sony and still works like a charm.

In my 2-channel stereo setup, my Sony dual tape player from the mid-’90s hasn’t given me a problem yet. Recently, however (five or six years ago), I had to replace my record player, which I now hope to replace again with something a bit more durable. Also, the CD player that I bought in 1991 finally died, forcing me to upgrade to an SACD player instead. That’s pretty much it when it comes to my older hardware. Man, I’ve been into this A/V hobby for a really long time.

Since Blu-ray rolled around, every component in my home theater, top to bottom, has been replaced at least once. There’s one very notable exception, however. I bought an Axiom Epic 60/350 speaker setup back in 2004 or 2005, and at least to my ears, they’re perfect. Clean, clear, devastatingly powerful, and capable of immersing every square inch of my house in sound, these are my favorite speakers that I’ve ever owned. Heck, I prefer the way my home setup sounds to any commercial movie theater around here. If I were to be asked this same question five years from now, the smart money says my answer won’t change. I plan to hold onto these speakers for a long, long time.

The oldest items in my current home theater setup are my speakers, both the Klipsch Synergy speakers and the Sub-10 subwoofer. These goodies have never done me wrong, and I’m not anxious to replace them. They’ve done a wonderful job over the past few years. That said, expansion may happen. I’ve considered splitting my gear into two rooms. I’d put new Synergy speakers (if a brand does me good, I stick with it!) in with my 2D DLP TV, and move my existing Synergy speakers into another room with my 3D television. I love my current setup. It has amazing flexibility without rewiring or moving anything, but my 3DTV doesn’t get too much use.

Technically, I’ve had a PS3 longer than anything else. That said, I’ve had to replace it once before, so the one I currently have isn’t as old as the speakers. The big black behemoth suits me just fine, though I may go to a Slim model in the near future. That isn’t really a pressing issue.

Normally, I upgrade my equipment whenever the next big thing comes along (like a 3D TV), when it craps out on me (R.I.P. Panasonic BDT350), or when it becomes incompatible with my new equipment (I’ll miss you, Onkyo TX-SR605). Since I ended up having to get a new Blu-ray player and AV receiver last week, and my TV isn’t even two-years-old, my oldest equipment is my Nuance 5.1 speaker system. I’ve had these speakers for about fifteen years now. They’re massive and super heavy, but still work great. In fact, they even still look brand-new. That said, I sure hope that they live a little while longer. August has been an expensive month. 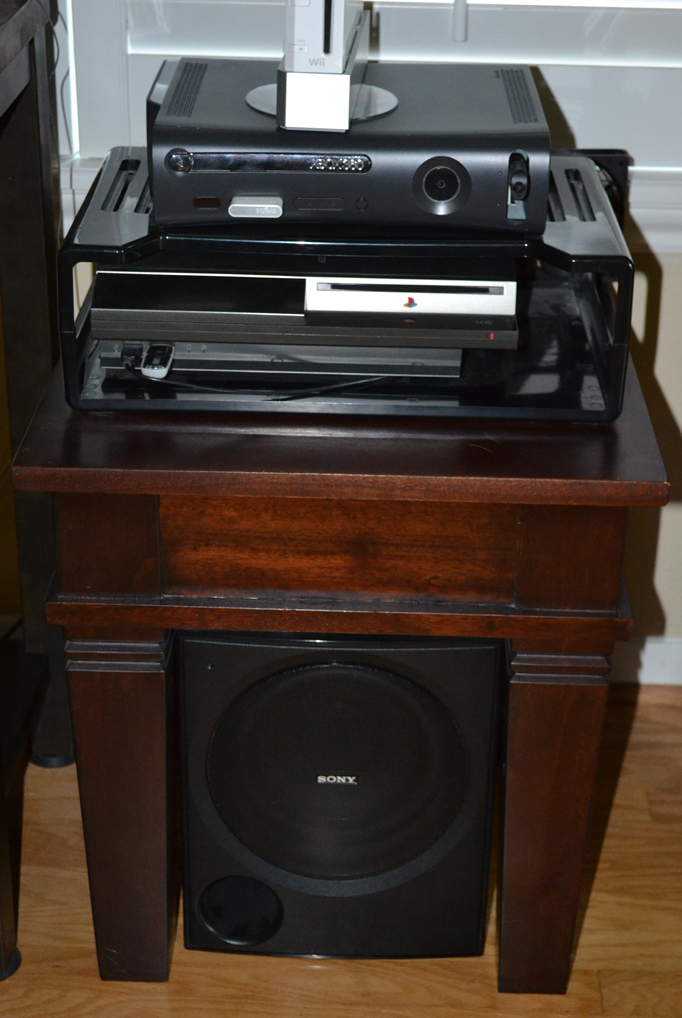 Having purged my main home theater of every analog-connected device except the Wii last year, the oldest piece of gear currently in my home theater is my subwoofer, a Sony SA-WP780, which I purchased in October of 2006. Combined with full-range speakers, this 200W sub delivers more bass than I would ever care to have short of building a movie theater, and it’s free of the annoying delayed standby click that I’ve noticed in several other similar models.

I own two other, larger, more powerful and more expensive subwoofers, but I have no intention of upgrading this one unless the Sony SA-WP780 breaks. Not long after purchasing it, I bought a solid wood table that fits the sub perfectly with just enough space to prevent it from directly shaking the table. Initially, it provided some nice space for a few books, but quickly became the go-to position for any component that needed a lot of breathing room (e. g. the Xbox 360).

I still have one of the fat PS3s. Its fan is getting progressively louder and I keep waiting until the day I get the dreaded Red Light of Death. Every time I go to someone’s house and see a nice Slim PS3, I get a little jealous. The newer model is so compact and so quiet. I’m waiting for one of two things to happen: either my fat PS3 conks out or Sony finally brings out a PS4. I’m hoping for the latter.

I still have a VCR connected in my system, but I haven’t turned it on in years other than to reset its front-panel clock. Has anyone else noticed that the clocks in Sony VCRs are terribly inaccurate? The VCR sits on top of my Motorola DVR, which is accurate, and the two displays almost never show the same time. Within a couple days of resetting, the VCR will lag a minute and then slip progressively further behind over time. I’ve had this issue with previous Sony units as well.

I’m not certain exactly which item was purchased first, but I believe that the oldest component in my home theater is the Pioneer HLD-X9 Laserdisc player that I imported from Japan in the late ’90s. If you’d asked me a few weeks ago, I would have told you that I hadn’t turned on that machine in ages either. However, it has received some active use recently for my David Lynch marathon. Some of the director’s more obscure TV work was never released on DVD, much less Blu-ray. Frighteningly, when I turned the player on, I found that I wasn’t getting any color in the picture. This seems to be related to the S-video connection. I plugged in a Composite video cable and the color came back. I haven’t yet determined whether this is a fault of the player’s output, my old S-video cable or something else. I’ll have to do some testing on that. In the meantime, the Composite is an acceptable workaround.

Do you have any old equipment lingering in your home theater, or is all of your gear shiny and new? Tell us in the Comments.

Incidentally, the banner image at the top of this post is just an old advertising photo for a Nakamichi Dragon cassette deck that I found via Google and thought was fun. None of us here actually own one, to my knowledge.

The Bonus View will take Monday off for the holiday. We’ll see you back here on Tuesday. Have a great long weekend, everyone!