I thought it might be fun to play a little Show & Tell in this week’s Roundtable. We’ll give you a peek at the gear in our home theater equipment racks if you tell us about yours too.

I specifically asked our contributors to send me photos and descriptions of the components on their equipment shelves: Blu-ray players, A/V receivers, cable boxes, videogame consoles, etc. I did not require photos of speakers, HDTVs, projectors, or miscellaneous theater items, though some may have chosen to provide those as well. 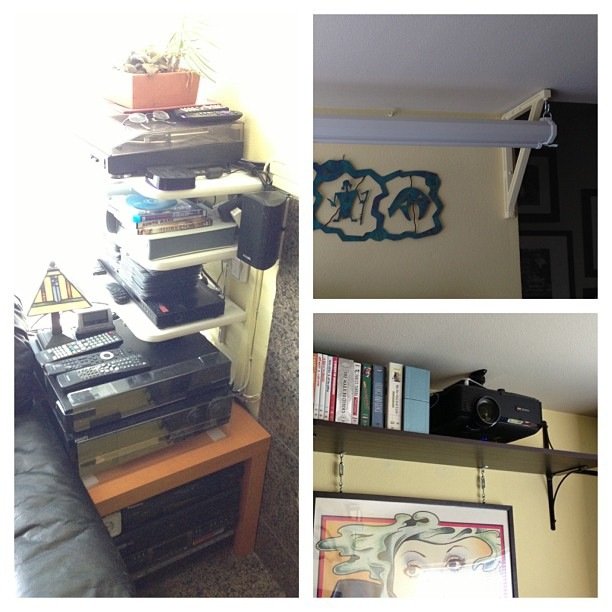 This feels more like a confession than a peek at my equipment rack. We’re going to be doing some renovations on our condo this fall, so I’m considering putting everything in a secured cabinet after windows are replaced if anyone has any suggestions. In the meantime, this is my semi-baby-proofed setup: 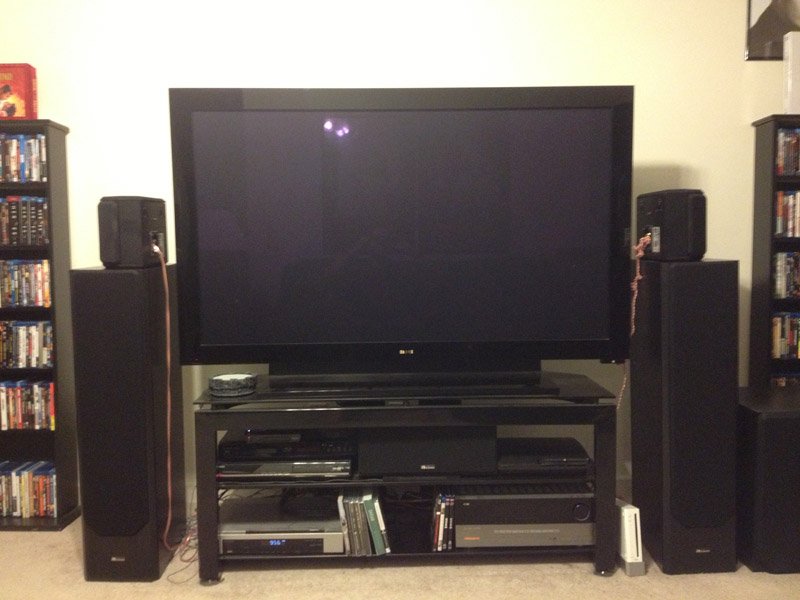 I’m getting the upgrade bug again, so that display and receiver aren’t long for this world. I have a separate setup of older gear upstairs, and that’s where I keep my Xbox 360 and other assorted game consoles, my Panasonic TH-50PX50U plasma, HK AVR-330 receiver, and on and on and on.

Top shelf, from left to right:

Bottom shelf, from left to right: 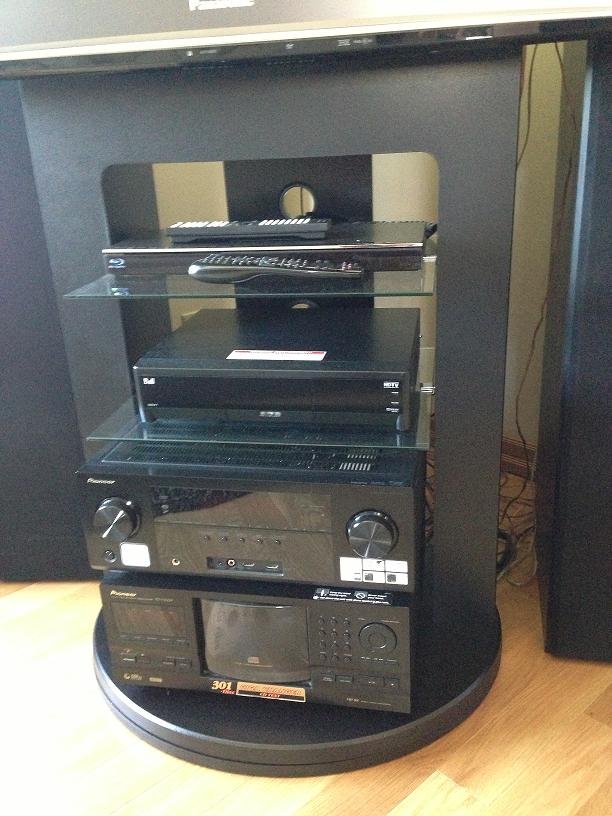 I wanted a nice, compact home theater stand and this is the one I went with. It has three glass shelves (although I’m only using two due to the size of some of my components) for equipment. Above, though not pictured, is my 50″ Panasonic Plasma TV. The first shelf has my Panasonic 3D Blu-ray player and remotes. Underneath that is my Bell satellite receiver box, and then the big ones at the bottom are my Pioneer AV/Receiver and CD player. Yes, my CD player holds 301 discs. Sure, it’s kind of obsolete these days since the Pioneer receiver has AirPlay built-in, but it still works great. 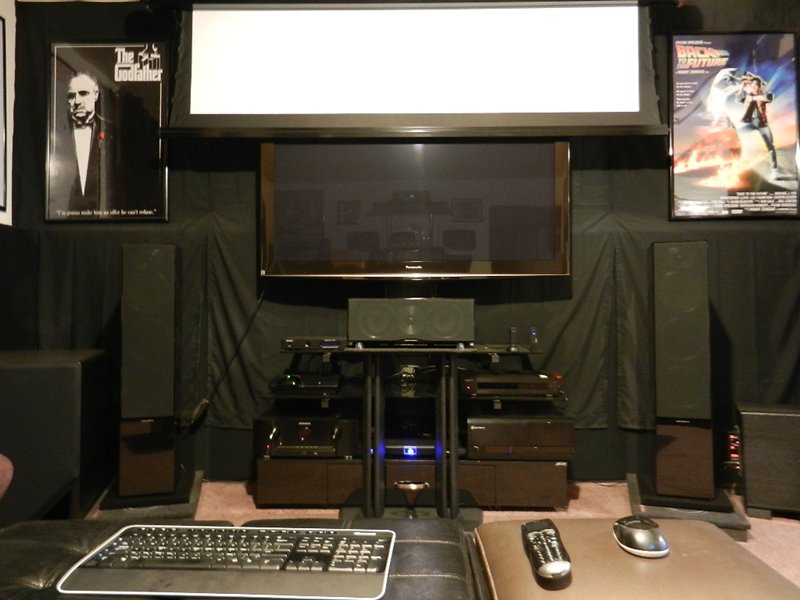 This is an older pic from last year, but there haven’t been any major changes since. The components are as follows: 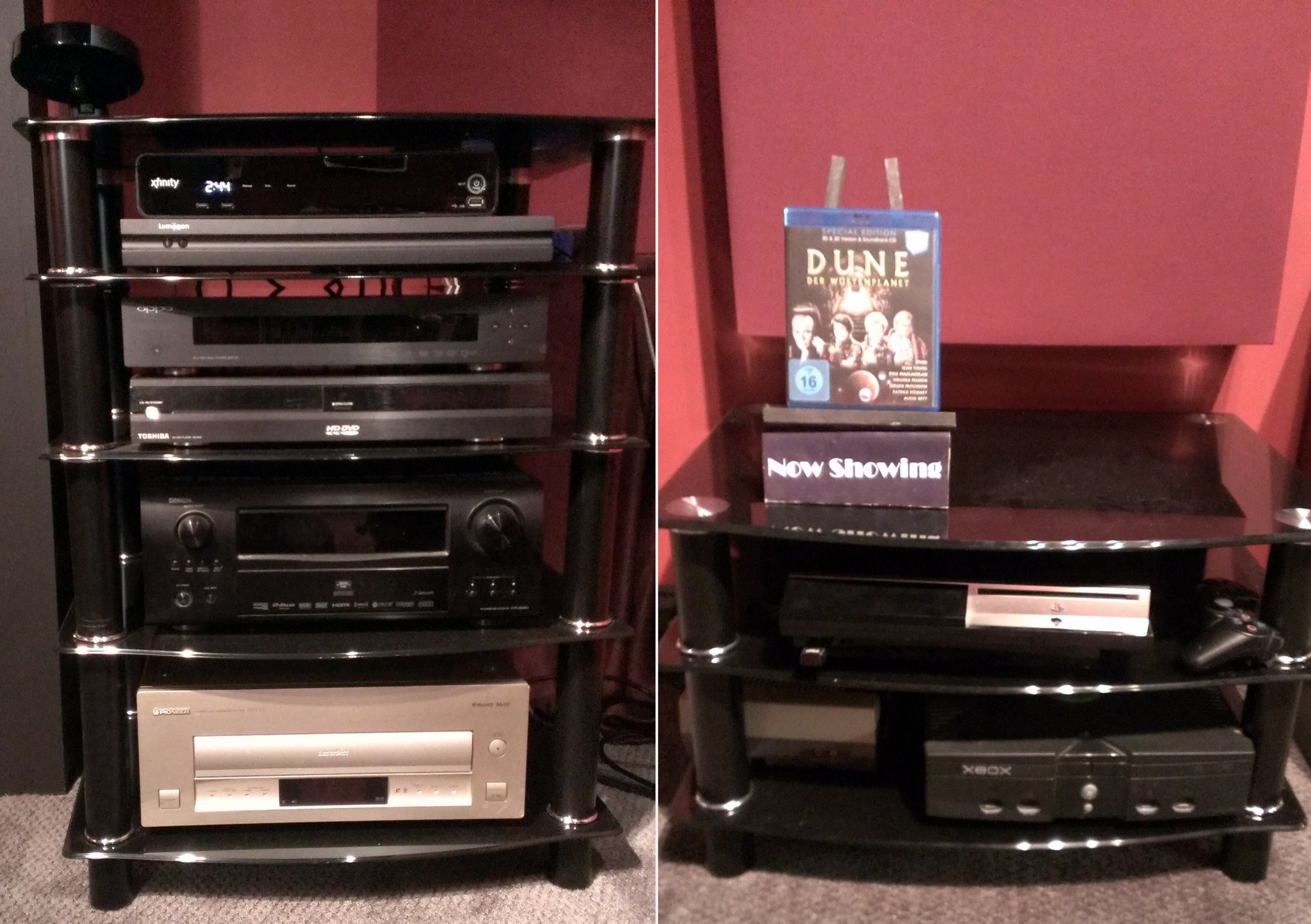 What home theater gear graces your home theater shelves? Tell us in the Comments. If you’d like to show us pictures, I recommend uploading them to a hosting site like ImageShack or Photobucket and linking to that.