We home theater enthusiasts are often on the lookout for tweaks that can improve the performance of our audio and video gear. Typically, the expensive doodads that supposedly purify an electrical power signal or reduce vibrations in a disc player’s laser mechanism are just snake oil and work only on placebo effect. Here’s a little tip I tried this weekend that’s absolutely free: Clean your equipment.

I’ve been a projector owner for years. In my mind, front projection is the only way to make a true “home theater.” One common issue with projectors, however, is that the lamps dim over time. Sometimes dramatically so. That bright and punchy picture you get out of the box may not look so impressive after a few years of use. The rule of thumb has it that a projector lamp takes at least a couple hundred hours to break-in and stabilize its brightness. Even after that, brightness can drop as much as 50% after a thousand hours. Most projector lamps need replacing long before their rated lifetimes. Unfortunately, these lamps also tend to be expensive.

Of course, “a thousand hours” in real usage can be a long time. Few owners run their projectors eight hours or more a day. Most fire them up for a few hours at a time to watch a movie or handful of TV shows. Also, it’s not like the drop-off is instantaneous – one minute you have a perfectly bright picture and the next it’s unwatchably dark. No, the dimming occurs gradually over a long period of time. You may not even realize that it’s happened until one day you find yourself wishing that your picture were a little brighter.

That “one day” happened for me recently. My JVC projector has just over a thousand hours on its lamp, and I’ve noticed that it’s just not as bright as it used to be. I can raise the brightness setting electronically, but that has trade-offs in washing out blacks and contrast. I can bump the lamp setting up from normal to High, but that makes my projector fan run very loudly, which is too distracting to watch a movie.

I was on the verge of ordering a new lamp when I came across this thread at AVSForum, where other JVC owners complained that their projectors dimmed at an unacceptably fast rate. While I wouldn’t call the rate on mine unacceptable, it does seem pretty early to be replacing the lamp. Then some users discovered that, after removing the lamp, there’s a glass pane in the light path that seemed to have a film of dirt on it. 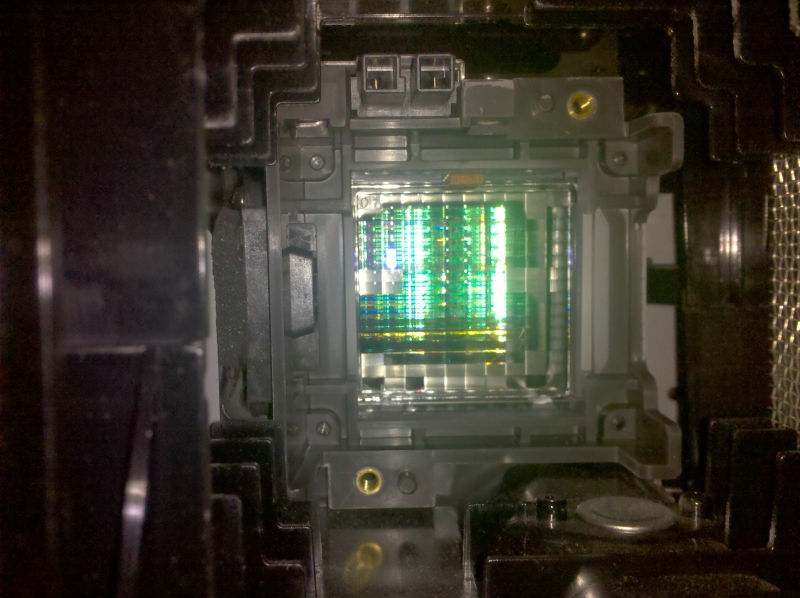 After cleaning that glass with a microfiber cloth, several users reported a noticeably brighter picture. Some even verified this with light meter measurements. The working theory right now is that the film is caused by outgassing of the plastics inside the projector generated by the heat of the lamp. This jibes with my previous experience with DLP projectors, which developed a similar issue on their spinning color wheels that required regular cleaning.

Since this seemed like a simple enough task with no real downside, I decided to give it a shot. Even if it had no effect, it shouldn’t harm anything to try. So I pulled out my lamp and took a peek inside with a flashlight. I couldn’t see anything by eye that looked dirty, and the cleaning didn’t seem to produce any dirt on the microfiber cloth. Some of the AVS posters said the same yet still found improvement. After replacing my lamp, the picture indeed does seem to be a little brighter. Not dramatically so, but a little bit – at least enough that I’ve postponed ordering another lamp.

I’m still contemplating an upgrade to 3-D in the relatively near future. Ideally, I’d like my current lamp to get me through until then. Hopefully, this little tweak will help with that.