The Nixeus Fusion HD is a media player that’s designed to play just about every file type you can throw at it. It also offers a few streaming options to boot. See how it stacks up after the jump.

One thing I should clear up from the start is that the Fusion HD doesn’t offer Netflix downloads or streaming, it doesn’t handle Amazon or Blockbuster’s on-demand services, and it doesn’t do Hulu. It plays digital media, and it does that well.

The box itself is a little taller than I expected it to be, but since it gives you the option to install a hard drive, that’s definitely understandable. It’s not a bad looking device, and it has the usual assortment of outputs on the back. You’ll find HDMI present, as well as optical and coaxial audio outputs. You can even hook it up with Composite Video cables if you really feel the need. The one thing that I found a bit lacking is the number of USB ports. There are only two. So if you’re using a wireless keyboard and the included WiFi dongle, that leaves you with zero.

I had an incredibly easy time setting up the player. It’s fairly plug-and-play when you’re using a wired internet connection. I also had no trouble setting up my WPA2 encrypted wireless network to work with the Fusion HD.

Adding a hard drive is a little bit more work, but not overly complicated. I simply had to remove four screws, pull the top off of the unit and attach the drive. The Fusion HD accepts SATA drives, and I was able to use the one from my computer – thankfully – without having to reformat it first. The one I used was a measly 120GB, but the Fusion HD will handle anything up to 2TB.

After getting unit hooked up, I turned it on and… waited. It takes a surprisingly long time for the Fusion HD to start up, and it doesn’t get any faster after the first time. When I hit the power button, the red power indicator light turned orange for around 15 seconds before the unit finally displayed the intro splash screen. The slowness doesn’t stop there. The menu system of the Fusion HD is a hassle. It’s a bit slow, unresponsive, and it’s not even nice to look at. The menu system doesn’t make the player, of course, but it would have been nice to be able to navigate it with ease.

Those points aside, the Fusion HD delivers on the promise of playing just about every file around. I threw everything I had at it, from AVI, WMV and MP4 ‘Rifftrax’ shorts to 1080p MKV movie rips and even a MOV episode of ‘Lucky Louie.’ (Boy that show’s hard to deal with, even if Louis C.K. is hilarious.) It played them all with ease. There wasn’t a stutter, a slowdown, or a need to download codecs.

Perhaps more exciting is the fact that the Fusion HD plays back ISO files, which allosw you to get the full DVD experience without having to get your physical media out of the case. I loaded up Hayao Miyazaki’s ‘Ponyo‘ and it worked beautifully. The Fusion HD has also been reported to play some, but not all, Blu-ray ISOs. Sadly, I don’t happen to have any, so I wasn’t able to test this functionality.

All the video I played came out just as well as anyone could expect. Anything that looked crappy on a laptop still looked crappy on the big screen – there’s no upconversion here. But when I played high definition files, they shone.

The Fusion HD does music too, and does it incredibly well. I was able to stream MP3 and FLAC files from my netbook without a problem. The sound quality is just fine. The one file type that the Fusion HD doesn’t support is APE, but that’s unlikely to cause a problem for most.

The Fusion HD isn’t a device that’s built to stream, and the limited streaming options really show that to be true. Watching YouTube videos, for example, is a pain.

As you may have noticed from my recent gaming posts, I’ve been getting into ‘StarCraft 2’ pretty heavily, so I decided to watch some of the matches from MLG Raleigh on YouTube. My computer can handle streaming these with no problem, as can my netbook, but the Nixeus couldn’t. Videos would pause, buffer, play for a minute and then pause to buffer again.

Audio streaming isn’t bad, though. I played around with Shoutcast to provide some background music while I prepped for my weekly D&D game. I’ve got to have the right tunes to paint miniatures to, after all. I ended up settling on a fantastic radio station based out of Cameroon that plays traditional African folk music with a bit of pop mixed in. There’s a fantastic singer that sounds like an African Paul McCartney and it kills me that I couldn’t find his name anywhere, but I can hardly blame the Fusion HD for that. 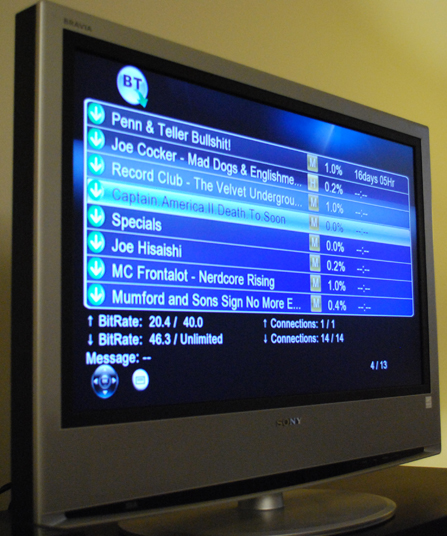 Downloading worked just like any BitTorrent client, but with the added bonus of not slowing down my PC at all. It’s not the most robust client, but you can set priorities, limit bandwidth, and do a few other things to optimize your experience.

The Nixeus Fusion HD has an MSRP of $219. Depending on your needs, it can prove to be very well worth the investment. It’s not a jack of all trades – the Fusion HD is a specialist that does a few things wonderfully. If you’re looking for something that’ll get you Netflix, this isn’t it. If you want a device that’ll play back every piece of digital media you’ve got, the Fusion HD is it.