Some of our readers may have noticed that yesterday’s Blu-ray post created quite a little kerfuffle in the Comments section about director Brad Bird’s decision to present ‘Mission: Impossible – Ghost Protocol‘ on Blu-ray in a constant 2.35:1 aspect ratio, without the shifting ratios that were seen in IMAX theatrical screenings. Where do you fall on this controversy? Are you fine with the decision, or is this a deal-breaker for you? Do you care at all? Vote in our poll after the page break.

Let me see if I can explain the problem. The majority of ‘Ghost Protocol’ was photographed on 35mm film at an aspect ratio of 2.35:1. (It’s technically 2.39:1, but everyone in the industry says “2.35” anyway, so let’s not quibble about that.) However, director Bird shot some of the action scenes on IMAX film stock, which has a much larger camera negative and a native capture ratio of 1.44:1.

In the old-fashioned, film-based IMAX 15/70 theaters, the bulk of the movie was letterboxed on the IMAX screen, until the action scenes, which expanded on the top and bottom to fill the screen, which should exceed the viewer’s field of vision. This is not something that can be fully reproduced on home video, due to typical screen sizes and the HDTV standard ratio of 16:9. If you were to pillarbox the full 1.44:1 camera negative in the center of a 16:9 TV screen, that would make the action scenes smaller and less immersive than the drama scenes, which is the exact opposite of the intended effect.

Keep in mind that the full 1.44:1 IMAX ratio was only seen in older film-based IMAX theaters, which the IMAX company has been phasing out in favor of digital theaters with a screen ratio of 2:1. On those screens, the movie’s aspect ratio shifted from 2.35:1 to 2:1, which is a much smaller difference. When I saw ‘Ghost Protocol’ in a digital IMAX theater, the change in aspect ratio was barely visible unless you knew to look for it. I’m sure that most of the audience never noticed. Also, all non-IMAX theaters (whether 35mm or digital) presented the movie at a constant 2.35:1 ratio from beginning to end.

You may recall that ‘The Dark Knight‘ was made in a similar fashion. When that movie came to Blu-ray, director Christopher Nolan elected to crop the IMAX action scenes to a screen-filling 16:9 ratio, which maintained the basic premise that those scenes should be larger than the other drama scenes. Some viewers liked this, while others found it distracting.

Brad Bird disagrees with this approach. As he has explained in recent interviews, he instructed that the ‘Ghost Protocol’ Blu-ray be presented in a constant 2.35:1 ratio, even during the action scenes.

When you’re sitting watching IMAX, the Panavision part fills your point of view. And then suddenly you see above that point of view and below it drop away. And most people, when they watch at home, sit across the room, and they’re watching a little box. And if that’s the case, I would rather have them see the Panavision thing, because it’s not drawing attention to itself… To me, if you’re going to watch it at home, I would rather have a consistent aspect ratio – we even filmed the IMAX sequences so they would look good in Panavision.

In other words, he finds the shifting aspect ratios distracting on a home screen, and he composed the IMAX scenes with a 2.35:1 crop in mind. Remember, the vast majority of viewers who saw ‘Ghost Protocol’ in a theater saw it at 2.35:1. That was the movie’s primary format, and the one that Bird had to compose the shots for.

Using a promotional still, I’ve cooked up a little graphic to illustrate the difference. Click to enlarge: 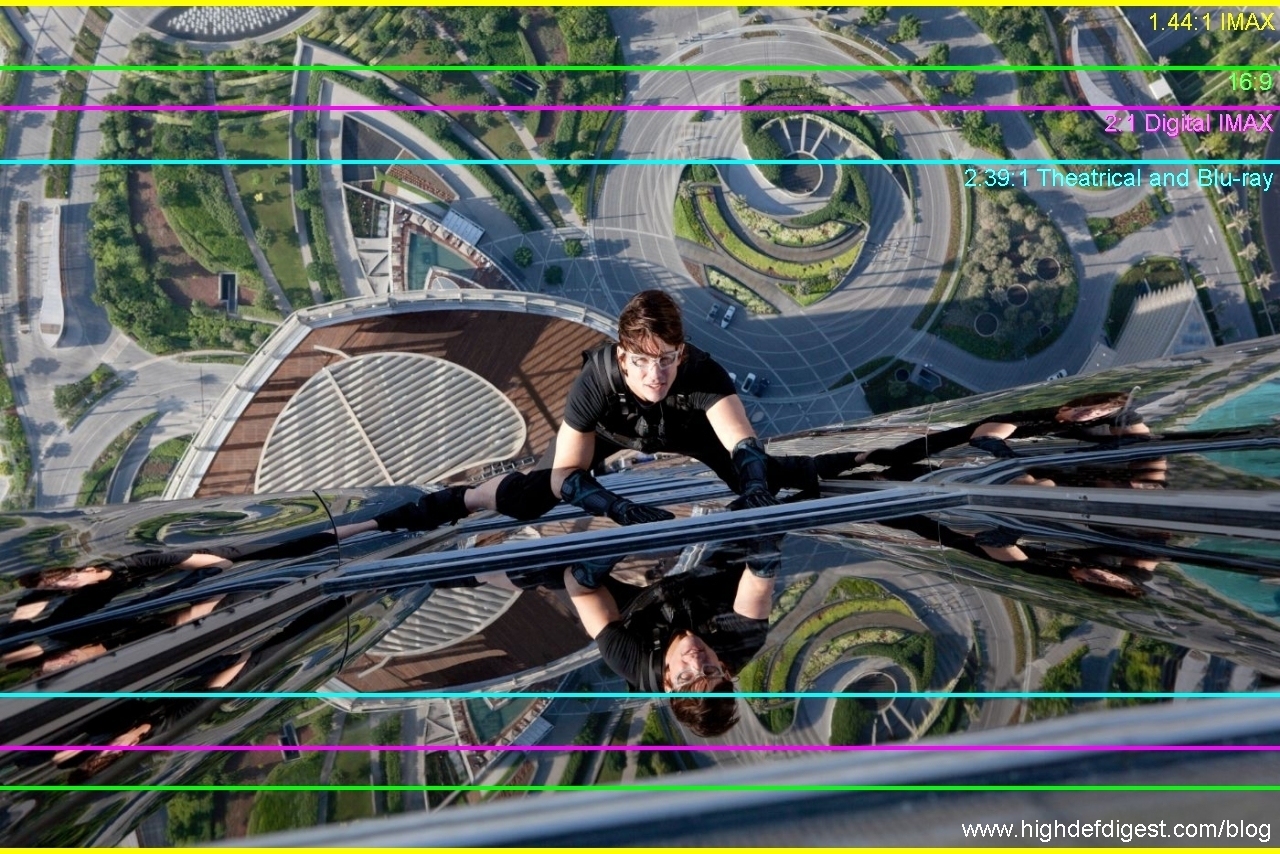 Personally, I’m fine with this. As I explained in the Comments to yesterday’s post, it’s Brad Bird’s movie, and if he says that he composed it for 2.35:1 and prefers it at 2.35:1, then that is the movie’s “Original Aspect Ratio.” Yes, I fully realize that some readers may think this sounds hypocritical coming from the guy who complained about James Cameron’s decision to re-frame ‘Avatar‘ for home video, but this is a different movie and a completely different situation. I stand by both opinions.

At the same time, if Brad Bird had decided to keep the shifting aspect ratios, I would have accepted that as well. I never complained about the shifting ratios on ‘The Dark Knight’ or ‘Tron: Legacy‘, and of the two editions of ‘Transformers: Revenge of the Fallen‘ that I reviewed, I elected to keep the “Big Screen Edition” with alternating aspect ratios. I just zoom them up to fill my 2.35:1 Constant Image Height projection screen anyway, and they all look perfectly fine cropped to that ratio, because they were specifically composed with that in mind.

Where do you stand on this?