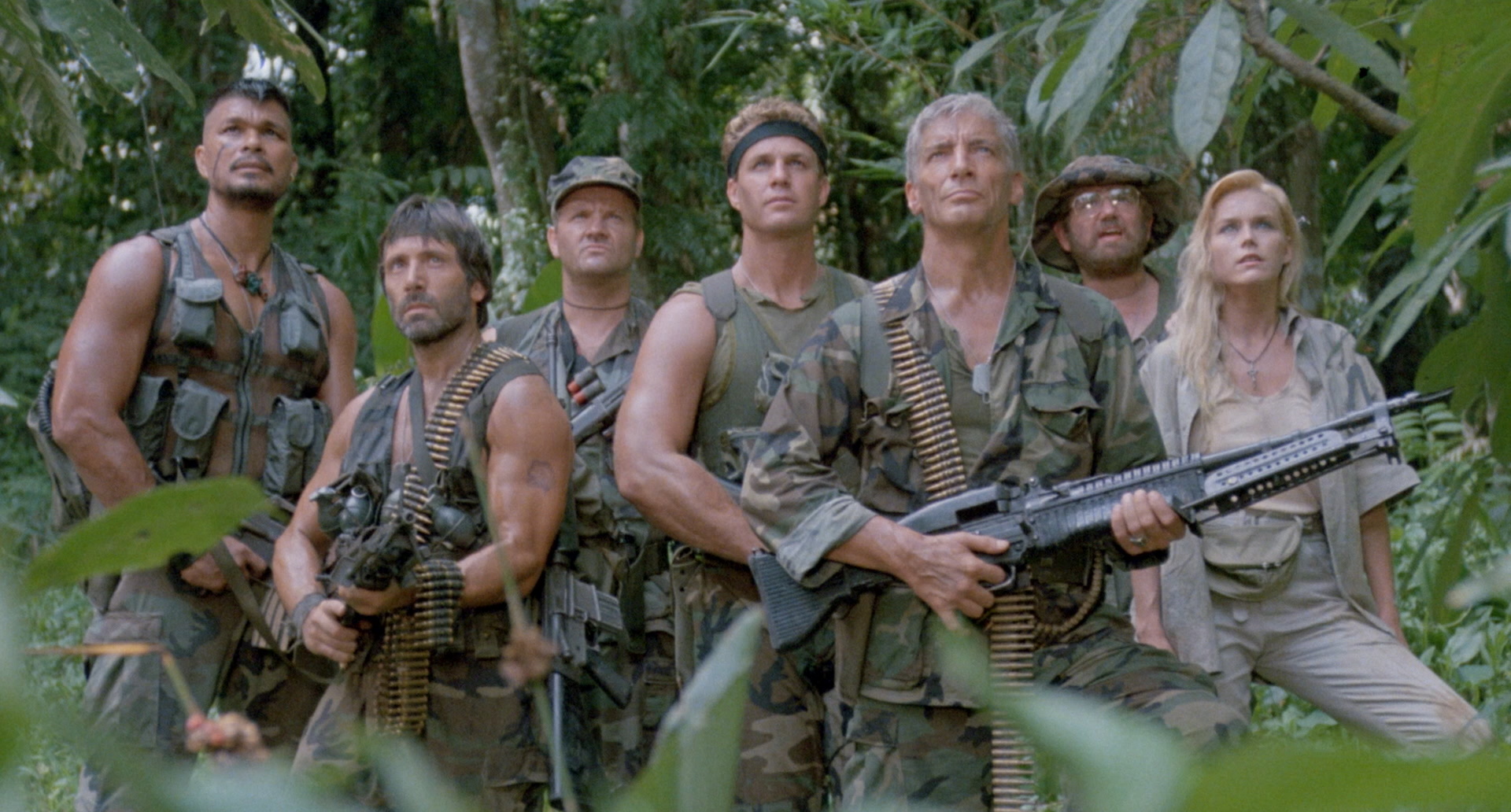 Okay, to be fair, Robowar is more than just a no-budget Italian Xerox of the single greatest action flick ever made. ‘Cause it’s also ripping off Robocop.

You see, the American government has engineered the perfect killing machine. Omega-1 is merciless, calculating, destructive, and best of all, obedient. Or, at least, it was. Its memory banks have gotten corrupted, and now Omega-1 is indiscriminately butchering everyone and everything on this remote jungle island. I mean: 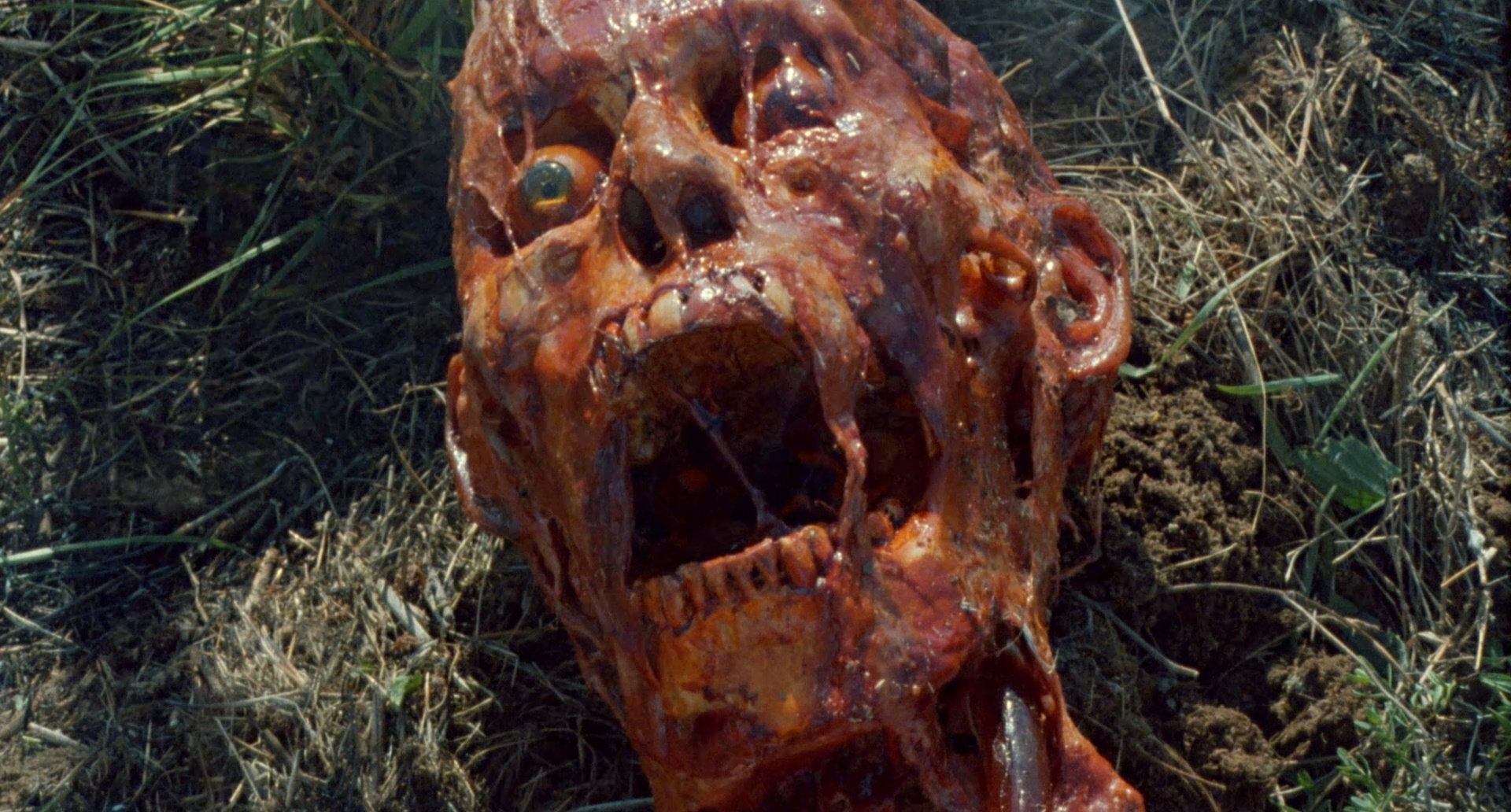 Maybe you’ve heard good things about Omega-3 fatty acids, but whatever it is that Omega-1 is packing stings like a sonuvabitch. The military brass has dispatched a special-ops team of BAMs, an acronym the colonel defines as “Big Ass Motherf*%^ers”. If we’re gonna neutralize Omega-1, we need our biggest asses!

Anyway, the team can never know the horrifying truth behind their real mission. And, y’know, Predator. So weasely slimeball Mascher is embedded into the team to guard these secrets and maintain the Army’s cover story. Of course, most of it doesn’t remain a mystery from the BAMs for too long, seeing as how Omega-1 systematically slaughters the team, one by one. 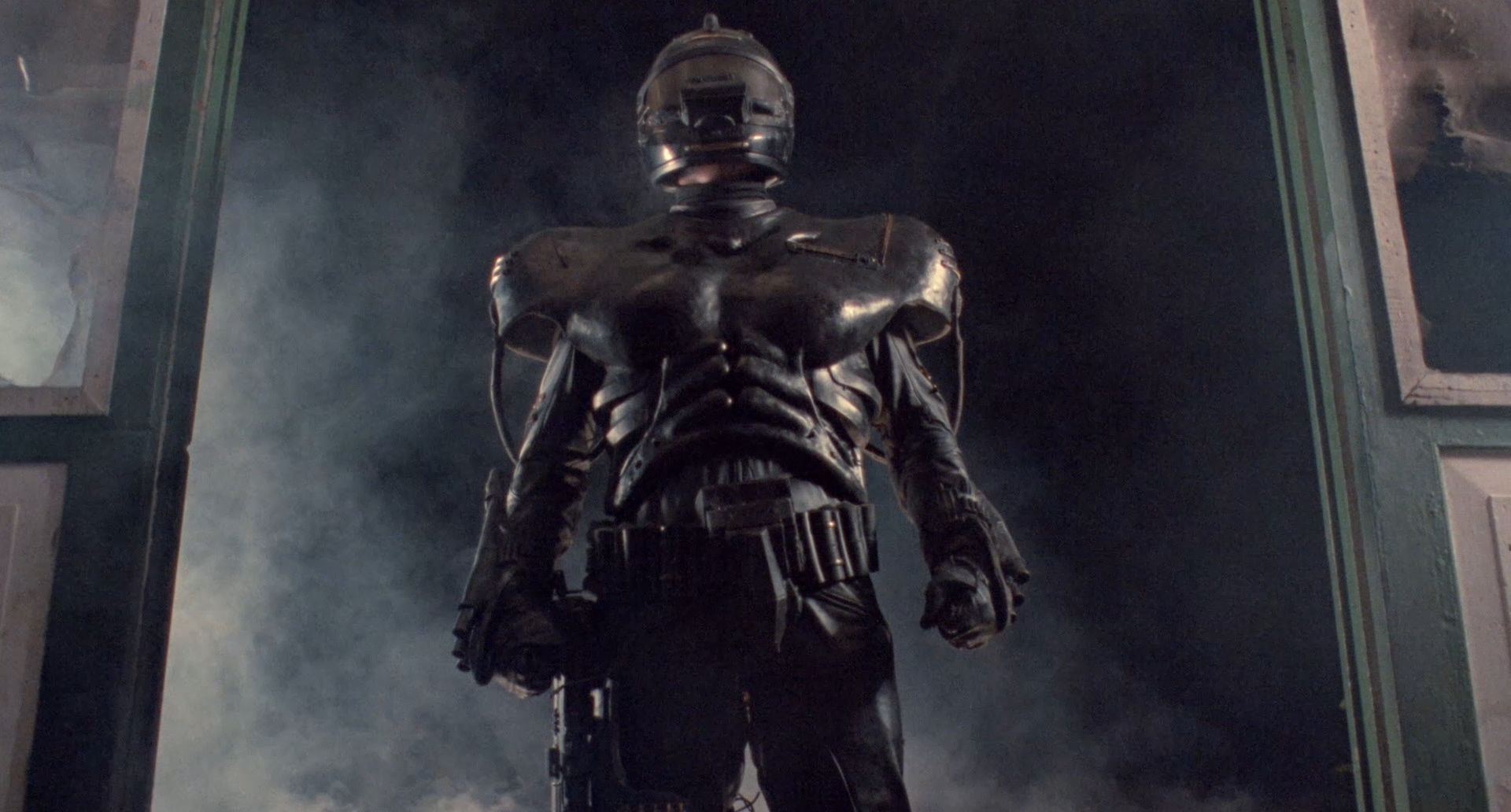 Robowar doesn’t just lean on Predator for inspiration or as the foundation for a pseudo-sequel; it’s a straight-up remake. Some sequences are reproduced almost shot-for-shot, particularly the siege on the rebel camp.

Blood is dramatically discovered on some leaves. Horribly mutilated corpses tumble from the treeline above. Dog tags are tossed. All the BAMs join one another in shooting blindly at some unknown target, leveling half the jungle in the process without a body to be found. Its version of Arnie leaps off a waterfall. Of course, there’s a climactic unmasking. 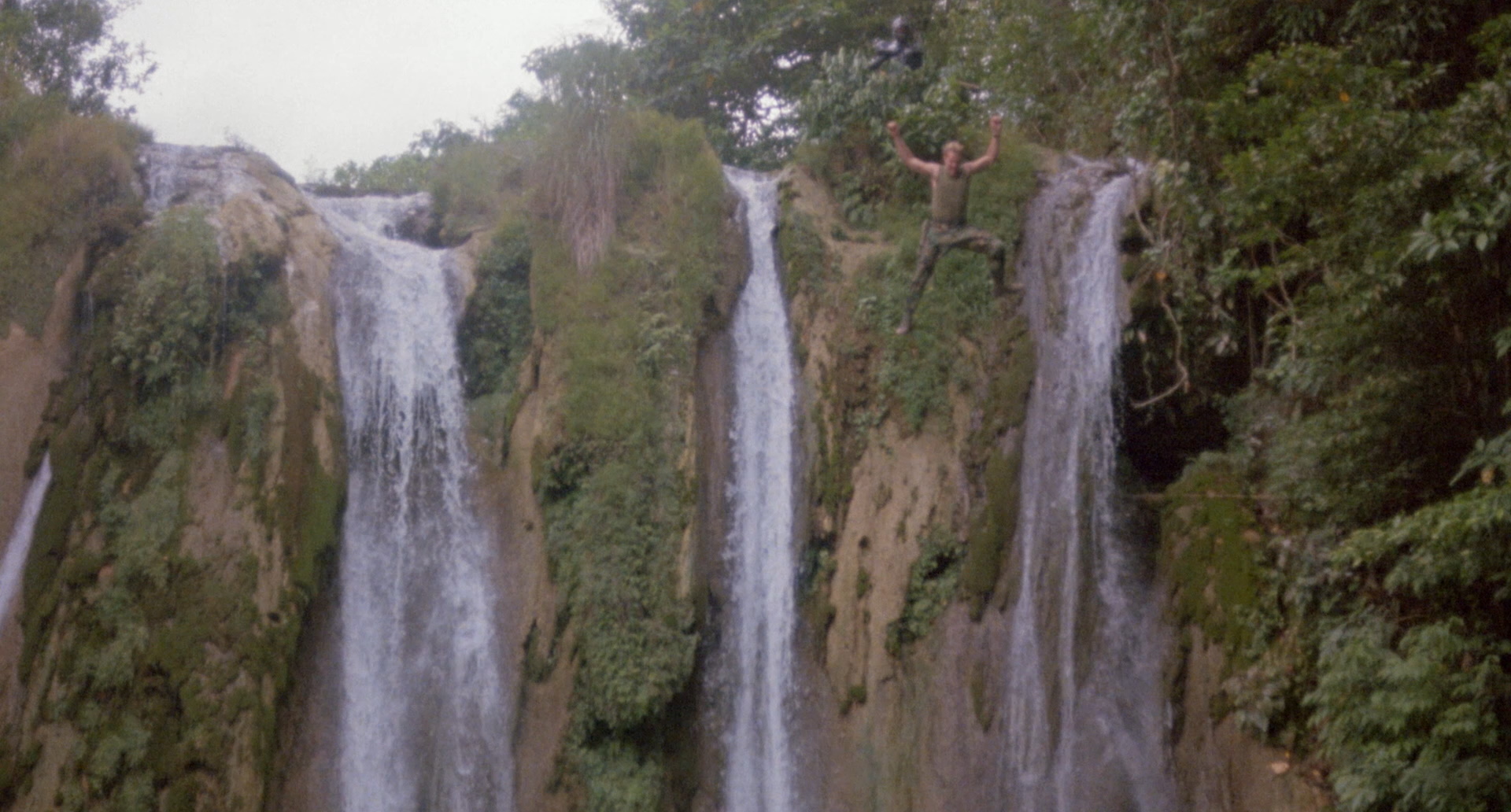 Although Not-Jesse-Ventura isn’t packing the same sort of artillery here, he gives a nod to the original movie’s Ol’ Painless M134 mini-gun anyway by growling, “Come out, bastard! I’ve got a painless cure for ya!” The team is stuck babysitting a beautiful young woman (listed as “Virgin” in the end credits) who’s prone to escaping. And yeah, there’s even a non-union, MexicanFilipino equivalent of “Get to the choppah!”

Curiously, Robowar doesn’t lift heavily from the third act of Predator, and there isn’t much of an equivalent of Dutch’s primal assault on his overpowered, otherworldly hunter. I know, right? Those are the best bits! 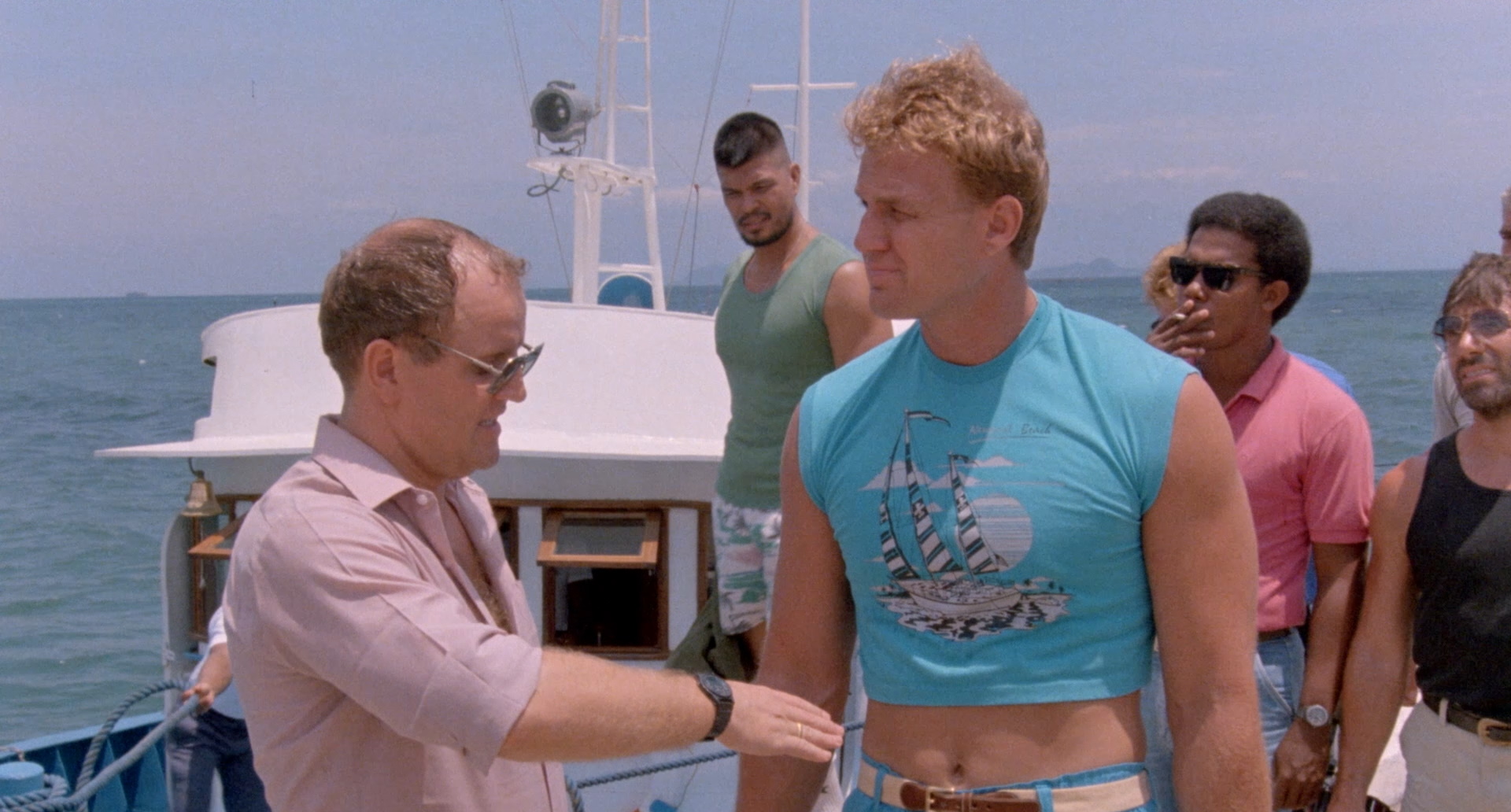 While basically all the members of the Predator special-ops team have some kind of equivalent here – including one inexplicably named after tyrannical Haitian despot Papa Doc – my favorite is its version of Billy.

While Native Americans are in short supply in the film’s shooting location of the Philippines, there are plenty of Filipinos to choose from, among them Max Laurel as Quang. He’s the spiritual dude attuned to the Earth and a hell of a tracker. He’s wielding something close enough to Billy’s machete. And, yes, he even dies screaming off-screen. For whatever reason, Robowar has him speaking in broken English, saddled with sterling dialogue like: “He no hide, yet we no see him.” 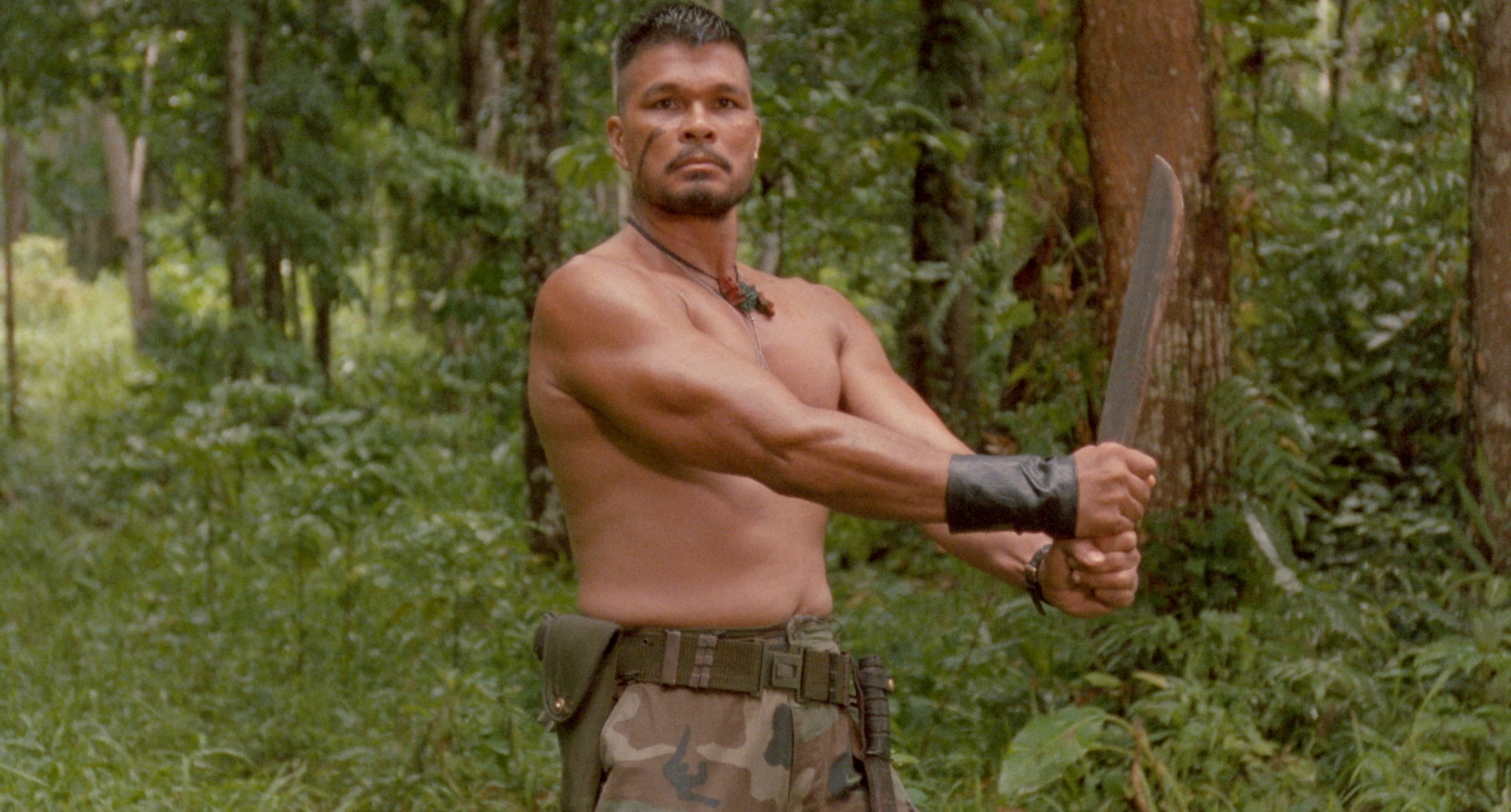 Then there’s Omega-1 himself. Itself? Whatever. One gripe you’ll hear throughout the movie’s extras is that the cyborg’s thin, chirpy robo-voice sounds as if Mom left a Speak & Spell in the washer. It’s not exactly ominous or menacing. And, yes, Omega-1 has its low-budget, pixelated take on PredatorVision. I do wish that the character design were more inspired. Omega-1’s Guy in a Motorcycle Helmet winds up evoking the killer from The Nail Gun Massacre more than an iconic extraterrestrial hunter.

While my heart still belongs to Shocking Dark – the Terminator-slash-Aliens ripoff from the same filmmakers – I still can’t help but love Robowar. It may be shameless, wholesale theft, but we’re talking about the loving tribute kind of larceny, and that’s okay with me.

At long last, Predator super-fans have an opportunity to witness Robowar in action, as this thirtysomething-year-old flick never found its way into theaters or on home video on these shores until now. 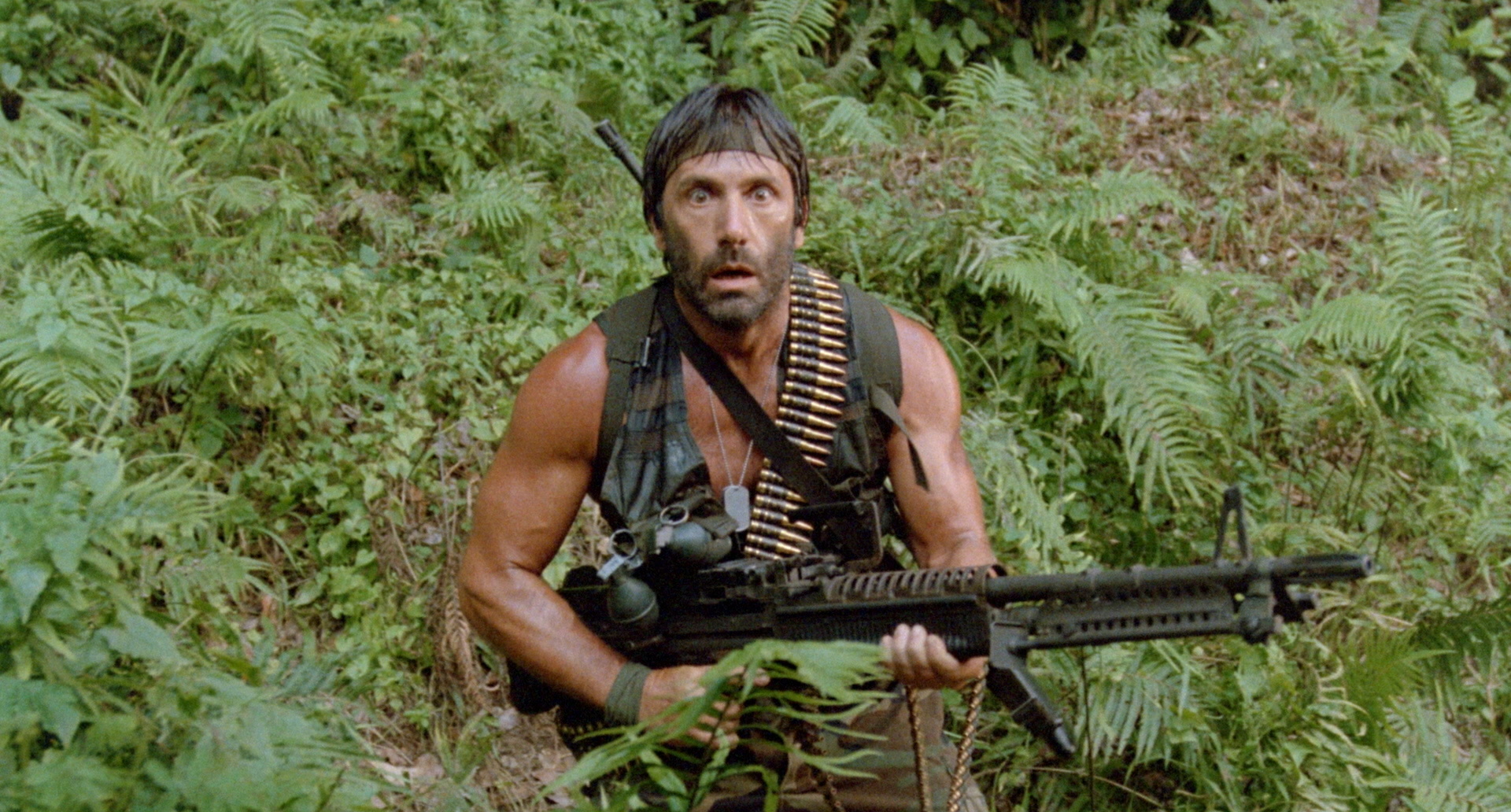 Robowar was streaming on Prime Video, but it was yanked shortly before this writing. Thankfully, Severin Films’ loving special edition is out on Blu-ray now, complete with a couple hours of interviews and even a CD of Al Festa’s soundtrack. 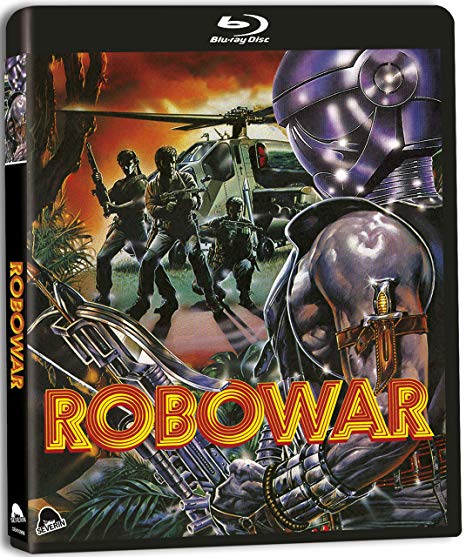