Awwww, “parasite” is such a nasty word. How many parasites do you know with a voice this velvety smooth? Can they articulately debate? Do they croon? Can they inject a hallucinatory chemical directly into your gray matter so you don’t remember them devouring your friends and neighbors’ brains? Wait, don’t answer that last one. 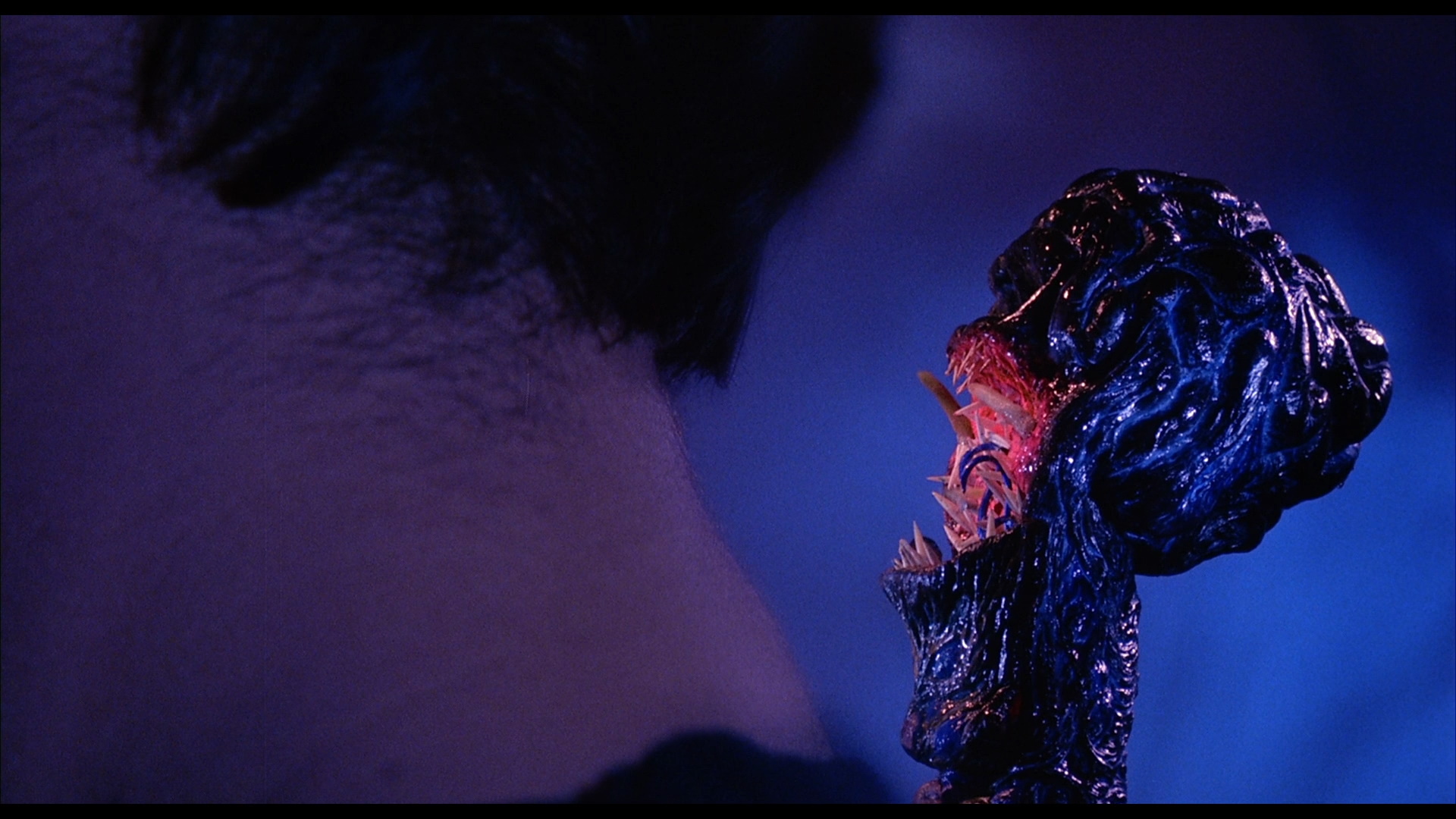 For a while there, everything sure seemed copacetic. Aylmer – a wee, blue, and decidedly phallic beastie – gets the steady diet of free-range human brains he needs to grow big and strong. Brian (Rick Hearst), meanwhile, gets a regular fix of Aylmer’s neurochemical euphoria injected straight into his occipital lobe, too stoned out of his gourd to realize that he’s a meat puppet for a cerebrophagic monster.

Brian’s addiction to the blue juice has cost him dearly. Seriously, have you seen his water bill these days? But when he sobers up enough to clue into what’s going on, Brian can’t stomach the thought of Aylmer munching on his estranged girlfriend, brother-slash-roommate, or anybody else, for that matter. Still, though, Aylmer’s gotta eat. And if Brian won’t play ball, his brain is as good as any. Seeing as how this little bugger is a sentient heroin needle with fangs, you can probably guess what’d happen if Brian’s juice supply were to be cut off: 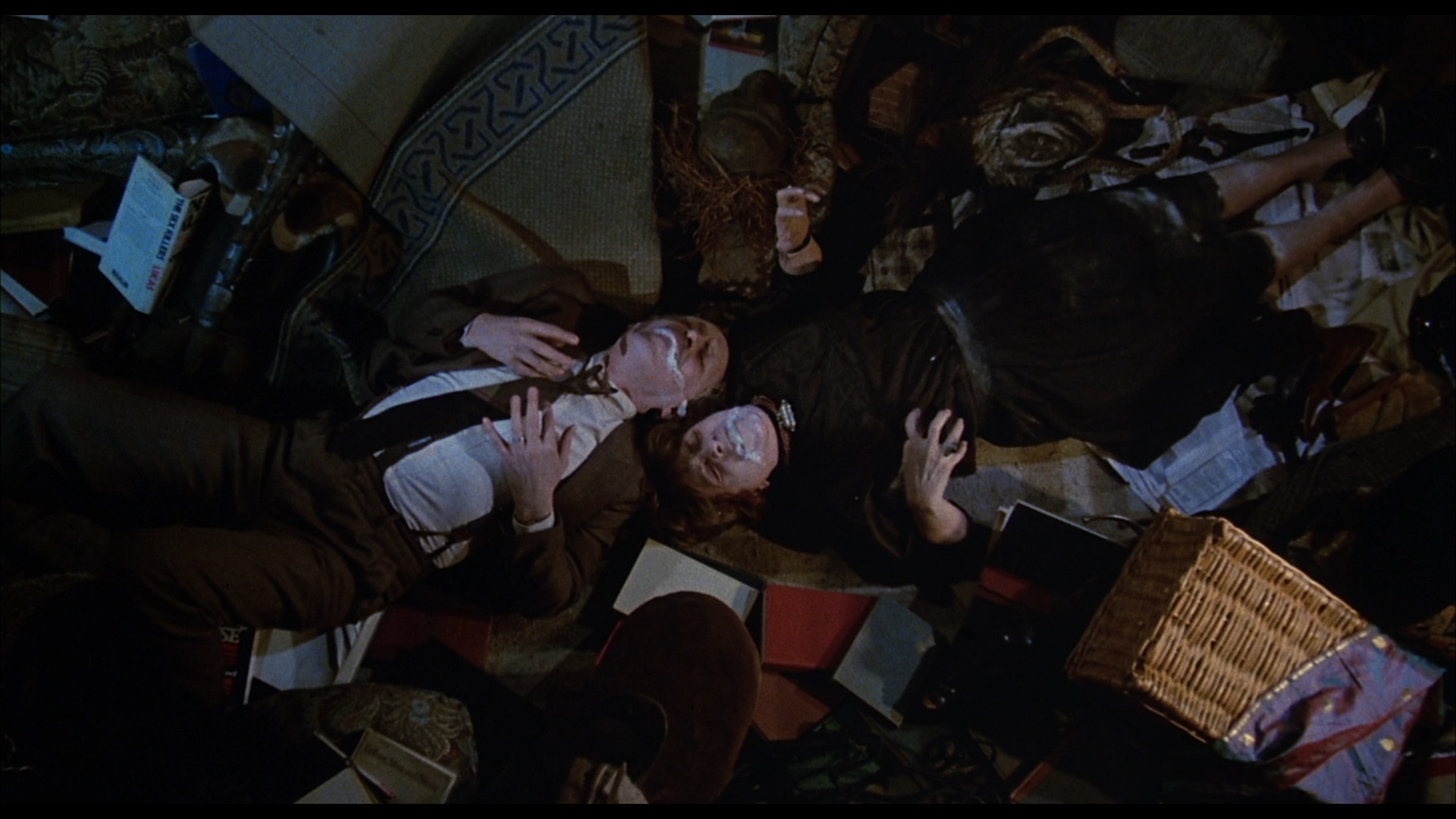 Try to imagine the demented mind behind Basket Case pitching an NBC After-School Special about drug addiction, and you’re somewhere in the ballpark. Writer/director Frank Henenlotter does indeed use his 1982 cult classic as somewhat of a springboard. Both Basket Case and Brain Damage are set in such gritty, grimy stretches of New York that I feel like I need a tetanus shot just watching ’em. They both revolve around seemingly ordinary-looking dudes carrying around tiny, bloodthirsty, not-entirely-loathsome monsters. And, yes, these little buggers have a knack for getting in the way of love most true.

Even if it didn’t spawn a gaggle of sequels the way Basket Case would, Brain Damage is to my mind the stronger of Henenlotter’s first two films. So much of that is owed to Aylmer. Despite leaping onto folks’ foreheads like a sea lamprey and sucking out their brains, the little guy is quite the charmer. He talks! He sings! His seductive thrall extends beyond the blue sunshine he’s pumping into Brian’s noggin. Even though Aylmer leads Brian down this dark path without so much as giving him a choice, there’s something almost sympathetic about him. After all, he’s just trying to survive on his own terms. I defy you to look at this expressive puppet’s Saturday morning cartoon eyes and hate him. Oh, Aylmer, I can’t stay mad at you! 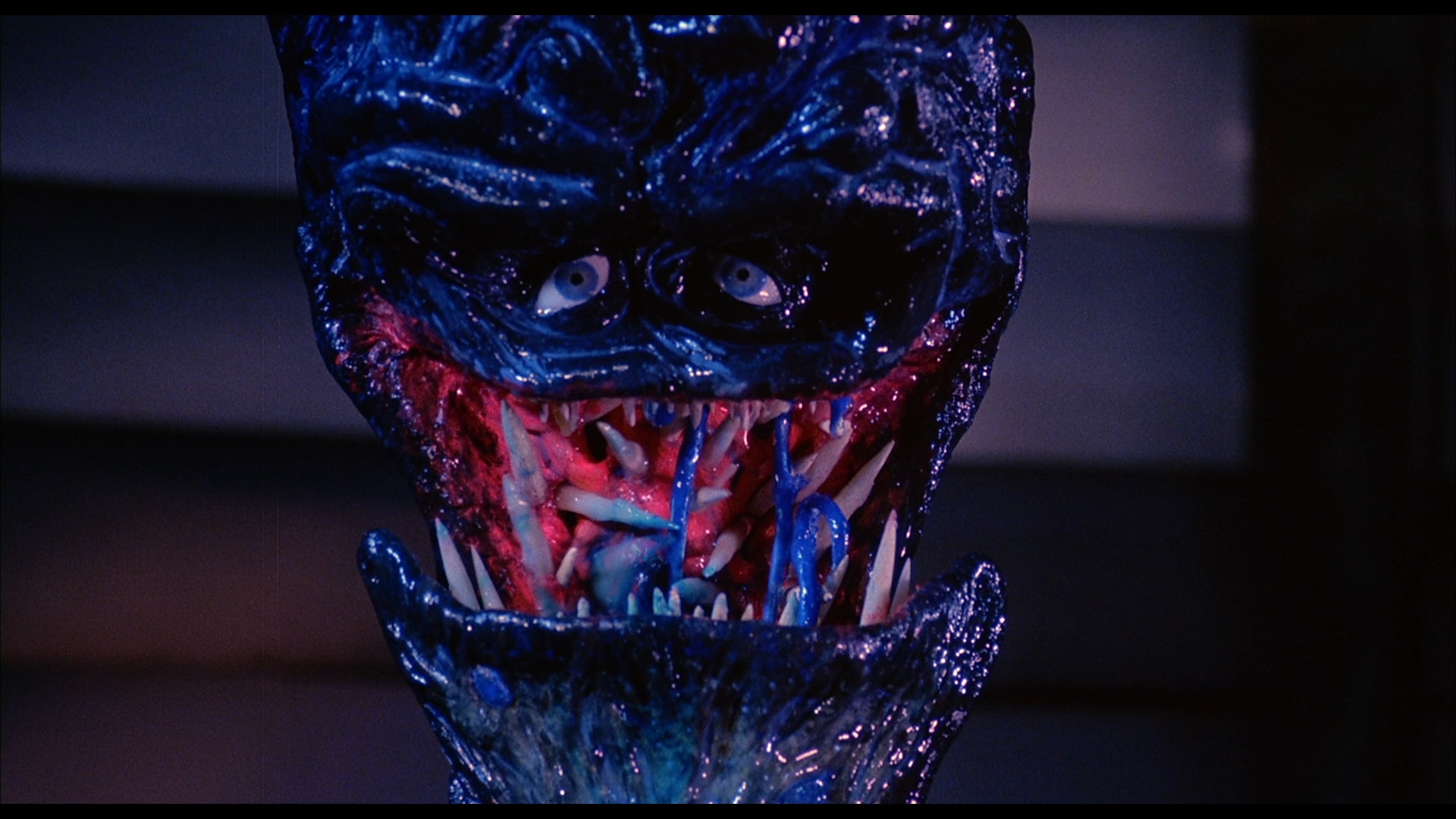 Although there’s no mistaking the film’s junkie metaphor as anything but, Brian’s gradual descent, failed attempts to make things right, and the damage inflicted on those he loves are executed skillfully. The impact of the film’s bleaker, most harrowing moments aren’t blunted by its (very) surreal stretches or blood-drenched sense of humor. Henenlotter’s advancement as a filmmaker and storyteller in the years since Basket Case is immediately apparent. He’s also assembled perhaps the most talented cast of his career, including a cameo that Basket Case fanatics will no doubt be thrilled to see. Of particular note is Rick Hearst – soon to be a decades-long fixture on various soap operas – who grounds this depraved delirium with his immediately likable, relatable performance as Brian. 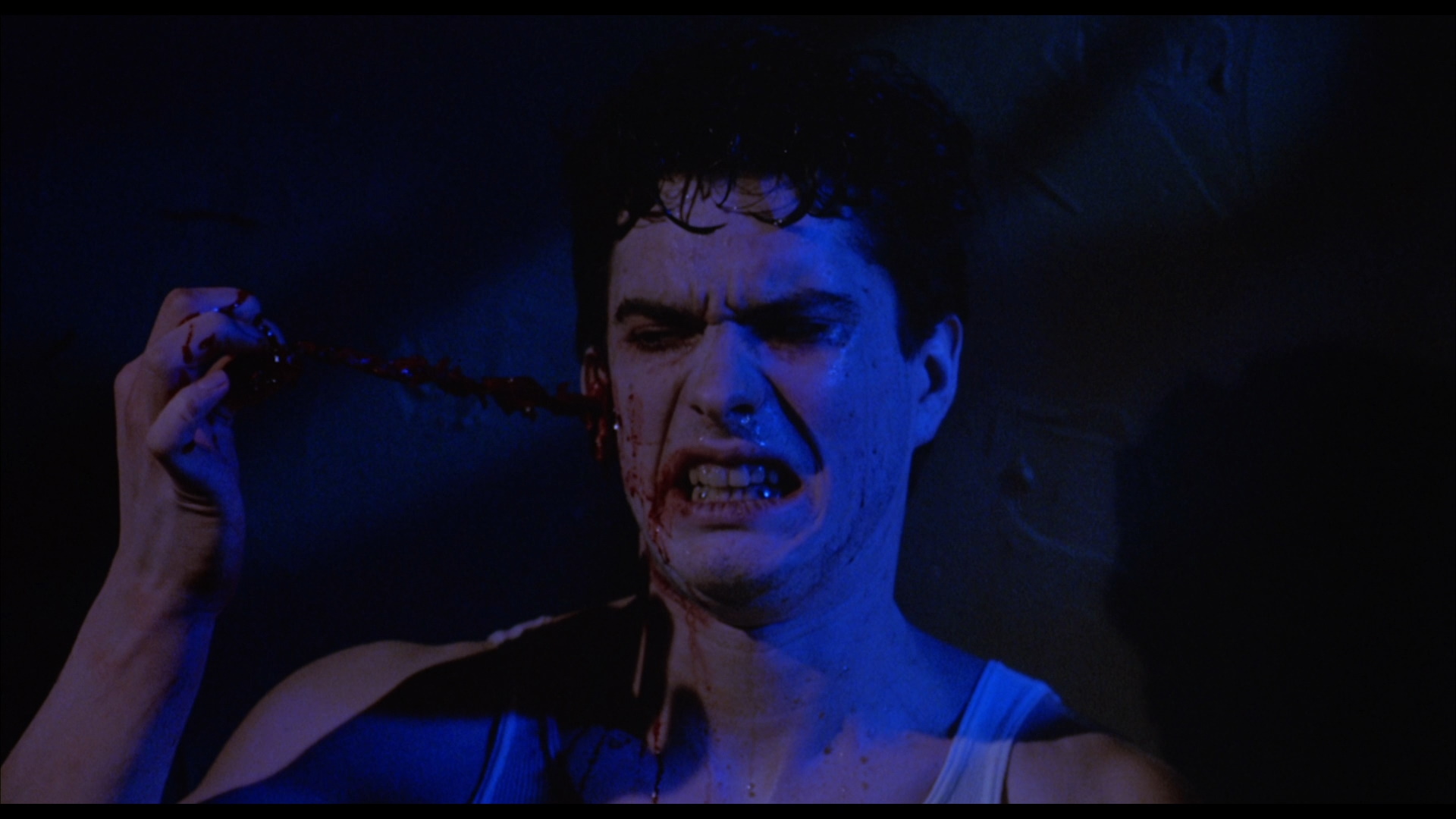 …and the end result is too hysterical, harrowing, and drenched in viscera to possibly resist. Although you really ought to pick up Arrow Video’s exceptional Blu-ray release with right at four hours of extras, Brain Damage is currently streaming on Shudder. Oh, and in case you’re wondering, the answer is “yes”: 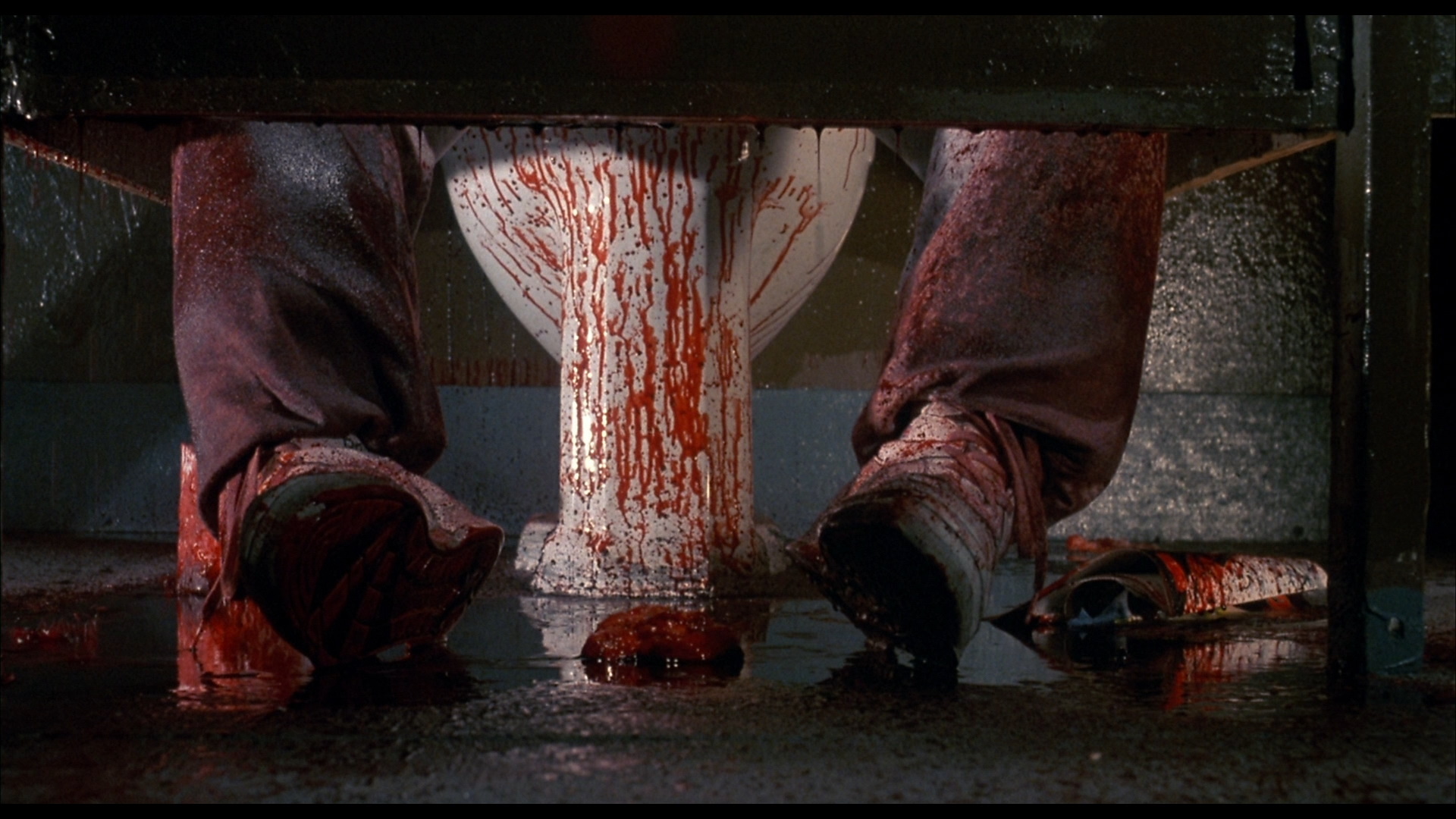 We are talking about the uncut version here.