The first Hollywood film to seriously address the nature of mental illness, The Snake Pit paved the way for other harrowing portraits like The Three Faces of Eve and Sybil. It also features a raw, riveting performance from Olivia de Havilland. Though far from cheery and a bit overblown, director Anatole Litvak’s film nevertheless shines a much-needed light on a subject that’s far too often ignored.

In the late-1940s, no studio produced more socially relevant or controversial films than 20th Century Fox. Topics once considered taboo were ripped wide open and examined with integrity and perception. Pinky (1949) dealt with a young black woman “passing” for white, while Gentlemen’s Agreement (1947) nabbed the Best Picture Oscar for its depiction of insidious anti-Semitism in New York society. After the tremendous success of the latter film, producer Darryl F. Zanuck eagerly sought a follow-up project that would yield the same rewards. He settled on The Snake Pit, an adaptation of Mary Jane Ward’s bestselling novel that exposed the deplorable conditions at many of the nation’s mental institutions. It wasn’t exactly cheery subject matter, but in the hands of director Anatole Litvak, the film treats its difficult issue with sensitivity and hope.

Upon its release, The Snake Pit generated shock waves for its uncompromising, often harrowing look at one woman’s odyssey in a state mental hospital. The film can seem a bit over-the-top today, but maintains much of its power and bite thanks in large part to Olivia de Havilland’s tour-de-force performance. Raw, fearless, and heartfelt, de Havilland’s portrayal strikes just the right tone, and reflects the confusion, suspicion, and self-doubt that characterize her psychological illness. Although she engenders sympathy, de Havilland isn’t afraid to expose her character’s coarse, paranoiac side, and the result is a three-dimensional, realistic portrait that steers focus toward the character rather than the star.

Fresh from Oscar gold in the maternal soap opera To Each His Own (1946), de Havilland set her sights on another statuette for her portrayal of Virginia Cunningham, a troubled newlywed whose deep-seeded guilt and fear of love sends her spiraling toward a nervous breakdown. Her young husband, Robert (Mark Stevens), entrusts her to the compassionate Dr. Kik (Leo Genn), but hospital overcrowding and impersonal care from the beleaguered staff force Virginia’s recovery to become prolonged and her case to fall through the bureaucratic cracks of the porous health system. Virginia endures a rigorous regimen of drastic therapies, from electro-shock treatment and cold baths to truth serum, before Dr. Kik can get to the root of her mental problems.

Litvak brilliantly depicts the asylum as a microcosm of society, with hierarchies and etiquette ruling each numbered ward. Often resembling a prison, the stark hospital is governed by a dictatorial staff intoxicated by its autonomy and unwilling to relax the carefully crafted atmosphere of uncertainty and fear. As Virginia navigates this illogical maze, flashbacks flesh out her illness and provide a break from the bleak, institutional setting. Many of the “inmates” are little more than kooky caricatures, but almost all possess a kernel of truth that keeps the film real and unsettling.

Time hasn’t dulled the impact of The Snake Pit, but many of its elements make it very much a film of its era. Alfred Newman’s melodramatic score, the charmingly batty interpretations of disturbed women, the simplistic (by today’s standards) explanation of Virginia’s problems, and the hospital’s primitive, almost barbaric conditions anchor the movie in the 1940s. Yet viewed in the context of its period, the film is even more powerful, and fuels one’s admiration for Fox’s willingness to tackle risky subjects. By exposing such horrendous problems, socially conscious movies like The Snake Pit affected change, and their far-reaching influence can’t be underestimated. Then and now, watching one woman overcome such an oppressive environment and fight tooth-and-nail to regain her sanity remains an inspirational and uplifting experience.

Here’s a look at the film’s trailer:

Fox has fashioned a transfer for The Snake Pit that’s as striking as the film itself. Newly remastered in 4k and presented its original aspect ratio of 1.37:1, this 1080p/AVC MPEG-4 rendering is a big step up from the previous DVD release. No specks, marks, or scratches dot the pristine print, and superior contrast and clarity immerse us in the labyrinthine world of the state mental hospital. Rich blacks, crisp whites, and a varied gray scale heighten the picture’s impact, while sharp close-ups spotlight de Havilland’s haggard, careworn appearance.

The DTS-HD Master Audio 2.0 mono track is free of any age-related hiss, pops, or crackle and features a wide dynamic range that embraces all the screechy highs and rumbling lows of Alfred Newman’s musical score. All the dialogue is clear and easy to comprehend, and no distortion creeps into the mix.

In addition to the audio commentary, vintage newsreel clips, and original theatrical trailer that have been ported over from the previous DVD, this Blu-ray edition also includes an isolated music track and two vintage radio adaptations. 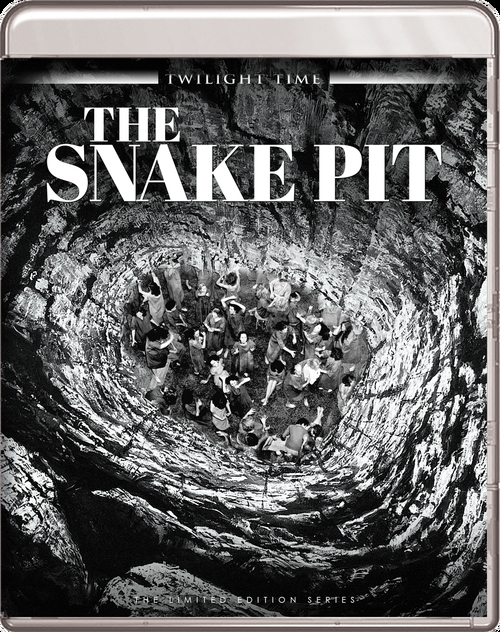