A JVC D-ILA projector is the heart of my home theater. When it started acting flaky on me recently and seemed possibly on the verge of failure, a giant knot formed in the pit of my stomach. After doing some research, I decided to attempt the daunting task of repairing it myself.

Let’s start with some background. I have two projectors in my home theater. I use a Sharp DLP model for 3D and (more importantly) for general TV viewing, which means that it gets the bulk of my use. However, I still consider my JVC DLA-RS40 to be my reference projector, reserved exclusively for 2D Blu-ray viewing. Although it’s a 2011 model and no longer state-of-the-art, when everything is working it still puts out a hell of an impressive picture.

Unfortunately, not long after I purchased it, I and many other RS40 owners ran into a serious problem with premature lamp failure. I wrote in 2012 about how my first lamp died after just 507 hours of use, barely 1/6th of its rated lifespan. My second lamp lasted about 1,000 hours, which was an improvement but still well short of expectations. Considering that replacement lamps cost around $400 each, this was truly unacceptable.

At the time, these issues were believed to be the fault of a design defect in the lamps. JVC eventually revised the lamp housing to include a flapper that would push more airflow toward the lamp, hopefully to prevent overheating. Some users reported better results after this. My third lamp had the flapper and seemed pretty stable, but I’d also been using this projector a lot less by that point and hadn’t put as many hours on it. Over time, I became complacent and stopped worrying about the projector, assuming that this third lamp was the fix I needed and that I’d get a good, long life out of it.

Seemingly unrelated to this, the front IR sensor on the projector stopped working. This meant that it wouldn’t receive commands from the remote control unless I aimed it to bounce the signal off the back wall of my room, so that the rear IR sensor could pick it up. Again, this seemed to be a very common problem among other owners. I considered this a minor nuisance and didn’t give it much thought.

Of more concern were periodic HDMI lock-ups, where the projector would blank out its image and refuse to respond to any commands, either from the remote or the physical buttons on its back panel. When this happened, my only resort was to unplug the projector, forcing it to turn off without a proper cool-down cycle. Doing so is very hard on the lamp and may contribute to early failure.

To the best of my knowledge, all of these issues were isolated to JVC’s 2011 models. As far as I’m aware, later product generations were unaffected, which suggests that JVC discovered the fault and fixed it, leaving owners of 2011 line in the lurch.

In any case, all seemed well until a couple months ago. My lamp was plenty bright and HDMI lock-ups were rare. Then, one night after a few hours of movie watching, the projector’s picture started to flicker. My heart dropped. I recognized this as the first sign of impending lamp failure. I checked the lamp counter and found that the bulb had barely over 600 hours on it. I immediately powered down the projector, hoping that this was a one-time overheating issue and wouldn’t recur. Sadly, the same thing happened again during my next few viewing sessions. The flickering never started right away, only after two to three hours of use, so I tried to keep my viewing shorter than that. This was not a long-term solution and I knew that I’d have to get it fixed, but I didn’t relish the prospect of shelling out another $400 for a fourth lamp.

Considering that this happened right on the heels of my Sharp projector also acting up, I felt like my home theater was dying on me, one piece at a time.

After my JVC problems started, I headed over to AVSForum to see if other users had similar experiences with the supposedly corrected lamp model. Digging through the Official JVC RS40/X3 Owners Thread, I learned that a very surprising discovery had been made during the time when I wasn’t actively following the conversation there. Starting in post #10075, member rprade reported that he found a capacitor on the projector’s front IR/LED board installed backwards. In his words: “The stripe on the capacitor which denotes the + end is connected to the ground side of the board. It should be mounted the other way. A capacitor will not work when installed backwards, but it takes some time before it will fail. When it fails it will usually short or get very low resistance.”

The following is his photo, posted to the AVSForum thread: 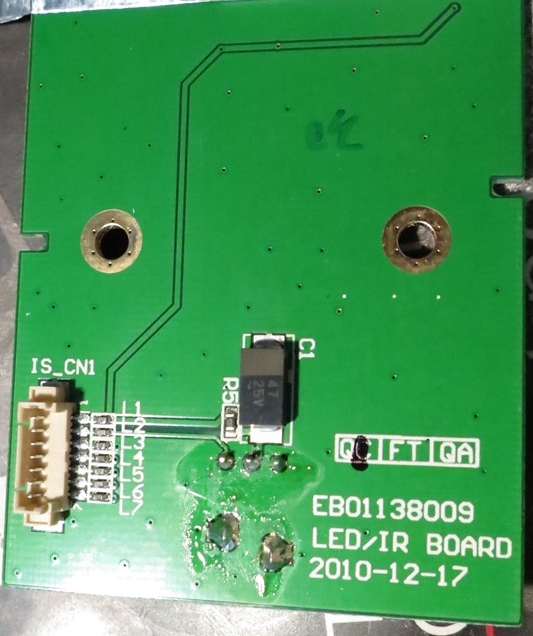 Sure enough, other owners opened their projectors and found the same thing, leading to the conclusion that this was a widespread manufacturing error with this model. The main purpose of the affected board is to accept remote control commands, which would explain the projector’s dead IR sensor. While that sounds like a minor fault, a short on this board could cause electrical surges that might affect other parts of the projector, including the lamp.

Following rprade’s lead, several other members then claimed that removing the capacitor and replacing it in the correct orientation resolved their lamp flicker and HDMI lock-up problems. This seemed like a miracle cure, almost too good to be true. Could something so seemingly insignificant really be the source of all my angst? Could I fix it myself? I had to try.

Affecting this repair requires some skill at soldering, of which I have little to none. I also get nervous about taking apart my expensive electronic toys. As such, I asked an engineer friend of mine for help, and he was very gracious enough to lend me some of his time.

First, we had to dismount the projector from the ceiling, then unscrew and detach the front panel. 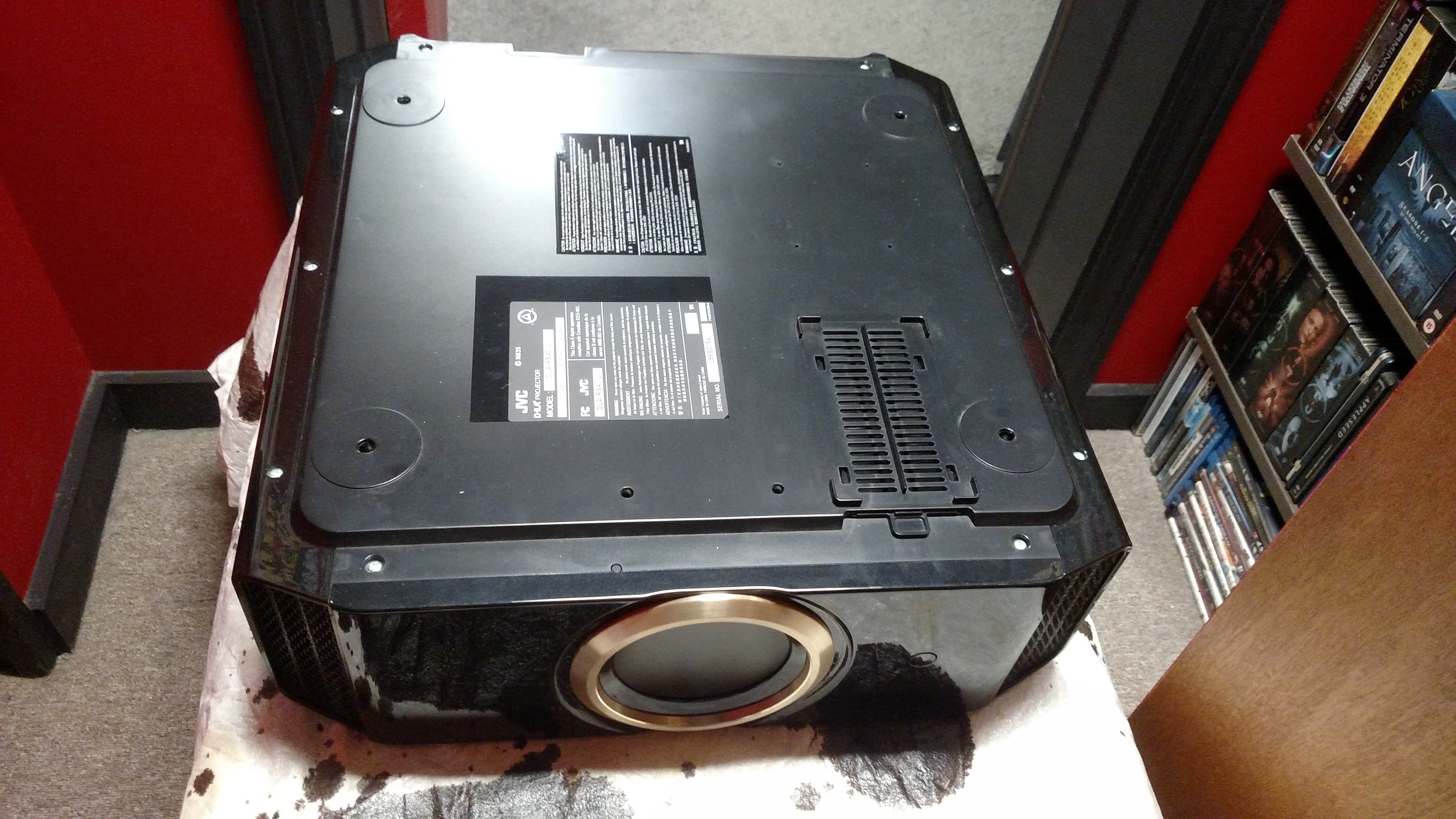 As promised, there’s the culprit with the capacitor installed backwards. 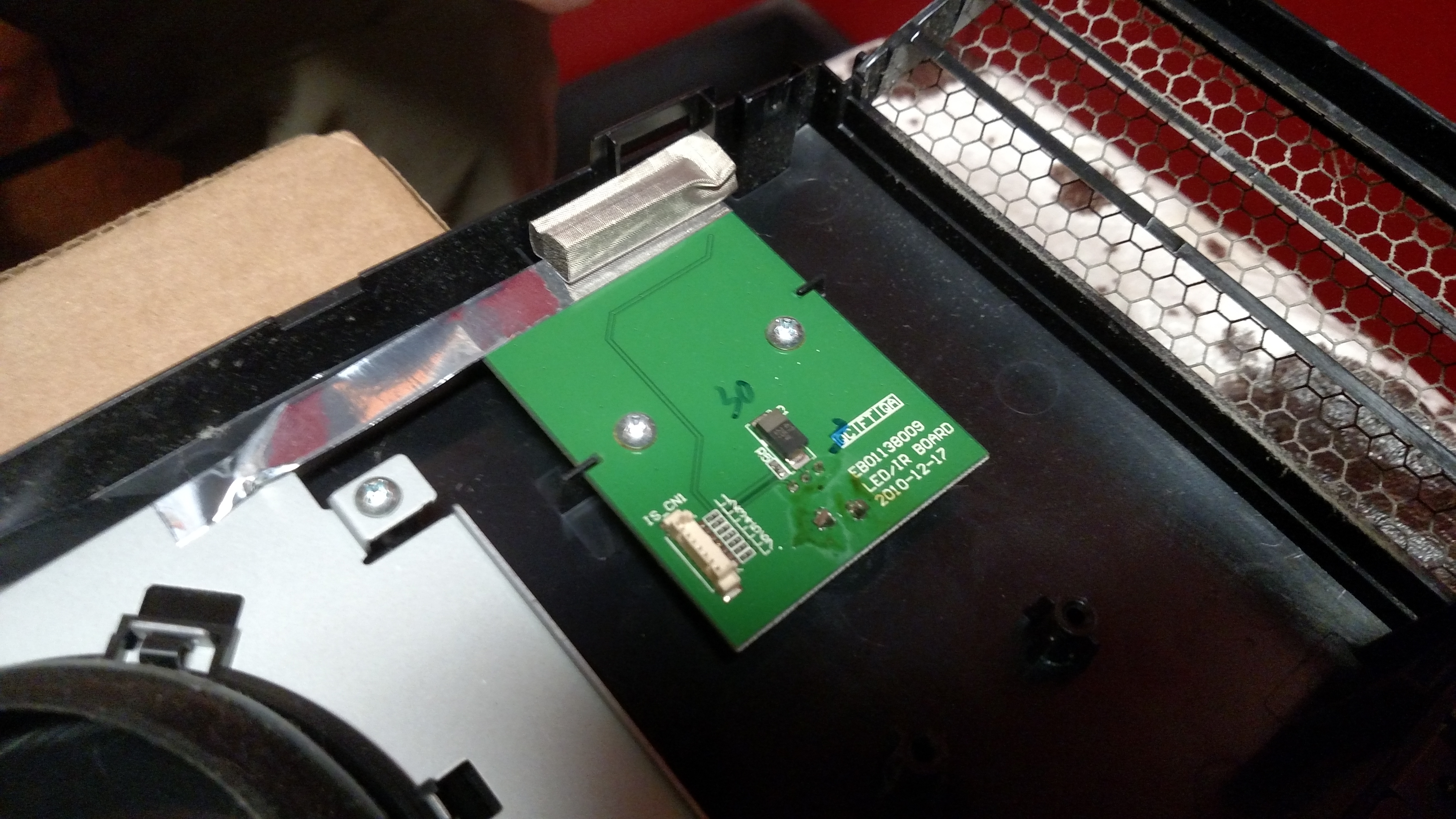 After some finessing with a soldering iron and tweezers, we got the little bugger out. 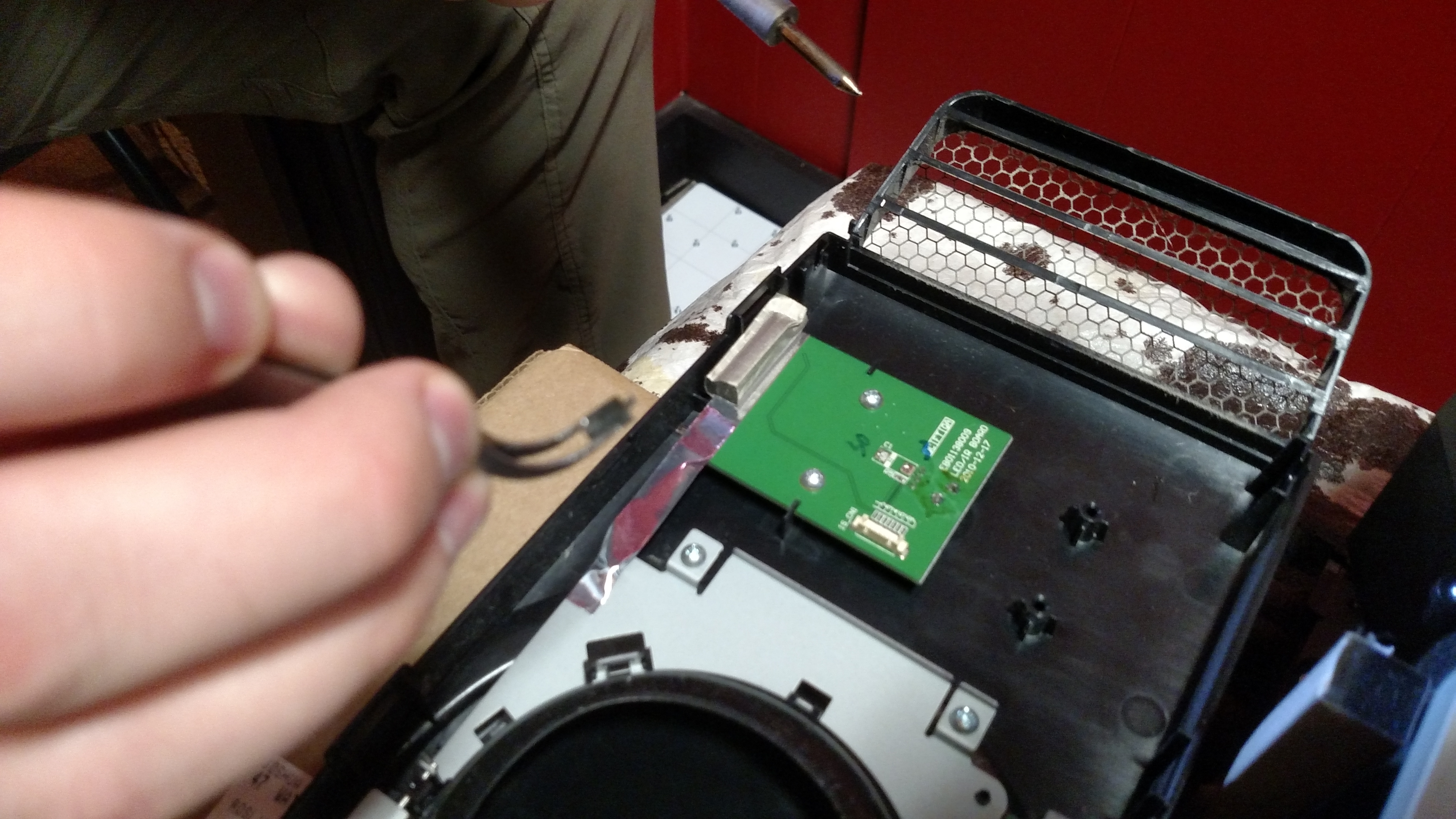 Can you believe that something so small could cause so many problems?

Rather than simply replace the same (potentially degraded) component, as others had done, I decided to err on the side of caution and purchased a new 47uf 25V surface mount capacitor. This was a very minimal expense that made me feel a little better about this procedure.

Next, we soldered it into place, in the correct orientation this time. 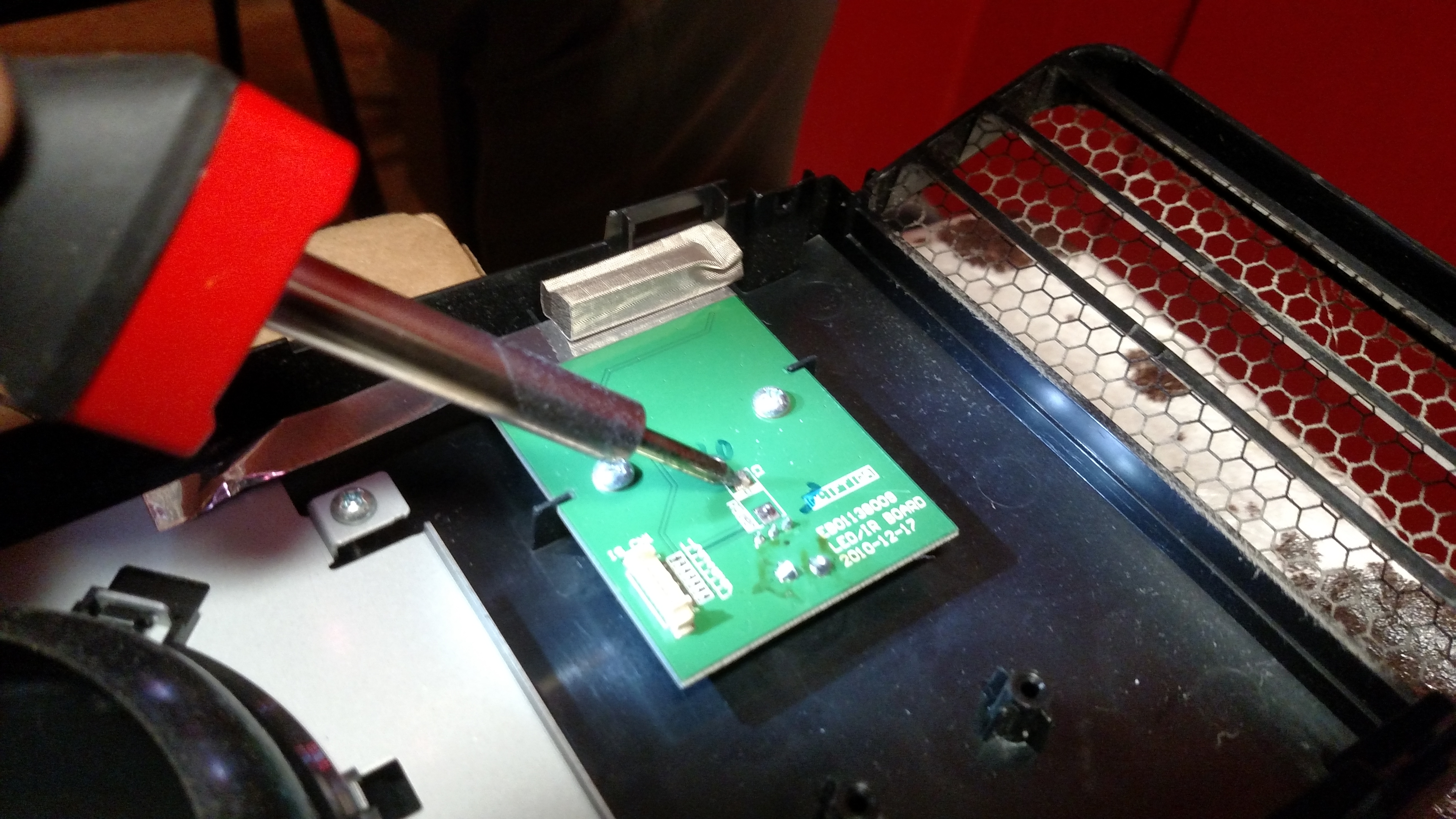 With that done, we just had to put the projector back together and mount it back on the ceiling. The mounting was an ordeal in itself, because it meant realigning the image on my screen, which takes a lot of painstaking effort. Nevertheless, that was the part I felt comfortable doing myself.

With the new capacitor in place, the projector’s front IR sensor immediately started working again. This was a good sign, but I wouldn’t know for certain whether the other problems were resolved until I put some more hours on the lamp. The flickering usually didn’t start until after a couple hours of use.

Over the last several weeks, I’ve watched a bunch of movies and run the projector a fair amount, usually in three- to four-hour sessions. Since flipping the capacitor, I have not experienced any more lamp flickering. This is a huge relief.

I have run into one HDMI lock-up, though it only came after a lot of flipping back and forth between two HDMI inputs while I was trying to do a video comparison of two discs. At a certain point, I got stuck with no image on screen and the projector was unresponsive to commands from the remote. However, simply disconnecting and reconnecting the HDMI cable from the back of the projector immediately resolved this and it worked normally after that point. In the past, I was basically screwed when HDMI lock-ups happened, and my only resort was to unplug the projector without a proper cool-down. That was not the case this time. This is a big improvement and I can deal with it.

I’m hopeful that the worst of my problems are behind me and the projector will behave better from now on. It’s a great display when it’s working right.