Okay, I’m making a rule. Studios, you can no longer take old vintage films and give them 3D makeovers. We don’t want the 3D, and we certainly don’t want to pay overpriced ticket prices to see a movie we already own on Blu-ray again. I doubt that anyone will listen to me, but if we all say something, maybe this madness will stop. Why do I bring this up now? Well, it seems that James Bond – specifically the old Bond films – may be re-released in theaters and Blu-ray in 3D. I’m not happy about this.

It appears that the Taiwanese Blu-ray re-issue of ‘Dr. No’, the very first Bond film, includes a 3D version in the set. The good folks over at Bleeding Cool also discovered that Moviefone has a current listing on its web site for an IMAX 3D theatrical release of ‘Dr. No’. As of now anyway, we’ve seen no official confirmation about this 3D release, but the writing is on the wall. 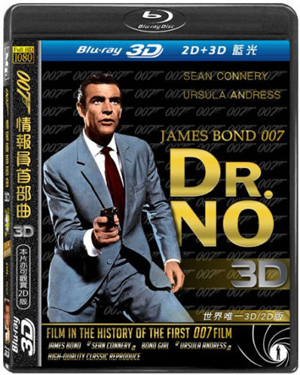 Since the new Bond film ‘Skyfall‘ made over $1 billion at the box office, and the release of the recent ‘Bond 50‘ Blu-ray set sold very well, it only seems natural that MGM would want more of our money any way it can get it. What easier way to do that than to convert the old movies to 3D?

This 3D Blu-ray definitely exists. It’s only a matter of time before the 3D version gets released stateside, and plays in theaters for a week or two. If this proves successful, I assume that the later films will follow in suit.

Bryan has worked in the film and tv industry as an actor, director, producer and casting director. In 2003, he made the comic book convention documentary 'Nerds Gone Wild' while attending the University of Kansas film school. In 2008, he opened a comic book store called Boomstick Comics, specializing in rare comics, movies posters, props and action figures. He collects horror soundtracks on vinyl and writes movie, music and videogame reviews for several outlets.
View all posts by Bryan Kluger →
Facebook
Twitter
Google+
Linkedin
Pinterest
Delicious