Harper is a 1960s throwback to the great film noirs of the 1940s. While there’s a lot to like about it, this hard-boiled mystery starring Paul Newman and a cast of Hollywood heavyweights never quite lives up to the classic movies it emulates. On the plus side, the Blu-ray looks like a million bucks.

Sam Spade and Philip Marlowe set the standard for fictional private detectives, and their rough-and-tumble on-screen exploits in such classic 1940s films as The Maltese Falcon, Murder, My Sweet, Lady in the Lake, and The Big Sleep are the stuff of legend. Lew Harper, as embodied by Paul Newman, wants oh-so-badly to join that elite club, but the movie that bears his name lets him down. Harper, despite a fantastic cast and breakout screenplay by a then-unknown writer named William Goldman, walks the walk and even talks the talk, but this neo-noir, like its titular antihero, comes up short and proves once again that the copy is never as fresh as the original.

That’s a shame, because Harper is based on a novel by Ross Macdonald, whose reputation as a crime writer rivals that of Dashiell Hammett and Raymond Chandler. Maybe I’ve just seen too many noirs over the years, but much of the story feels like a Chandler retread instead of an homage. If you’re a noir enthusiast, you’ll see most of the twists coming and regard the characters as cutouts, not real people. There’s the rich, aloof matron (Lauren Bacall) who hires the messy private dick (Newman) to find her no-good husband. Her nubile, promiscuous stepdaughter (Pamela Tiffin) stokes the passions of the family’s shady lawyer (Arthur Hill), but she only has eyes for her dad’s private pilot (Robert Wagner), a smooth-talking playboy and the last guy to see her father before he went missing.

Harper takes the case because he needs the cash, but the clues lead him down several rabbit holes and into plenty of seedy and shady locales. In between fistfights, shootouts, a fair amount of flirting, some role-playing, and numerous run-ins with the inept police, he feebly tries to repair his broken marriage, testing the patience of his estranged wife (Janet Leigh), who loathes his sordid, violent profession but can’t resist his gruff charm. Often beaten but never broken, Harper gamely trudges on. It’s a rough, wearying existence, but there’s something about all the filth that he loves more than anything – and anyone – else.

After almost two hours, we finally get the payoff. It’s a long time coming and far from surprising, but the clever denouement leaves us with a wry smile.

Much like Harper himself, the film tries a little too hard, forcing its hand and leaving the viewer almost as exhausted as its beleaguered lead character. Newman brings plenty of jaded cynicism, square-jawed toughness, and a cocksure, wisecracking attitude to the rumpled Harper that goes a long way, but the 1940s story doesn’t translate well to the mod, go-go 1960s. A neo-noir like Body Heat is stylized enough to infuse its contemporary setting with a retro feel, but Harper tries to be too hip for its own good. The eye-popping color photography by three-time Oscar winner Conrad Hall doesn’t help. It looks gloriously lush but nothing like noir, while Jack Smight’s by-the-numbers direction, featuring some laughably bad rear projection work, at times makes the film seem like a cheap TV movie. (Interestingly, Smight remade Billy Wilder’s iconic film noir Double Indemnity as a made-for-TV movie in 1973. Let’s just say it was a misguided decision and leave it at that.)

The cast, however, is terrific, with many big stars loaded into a relatively small film. The icy, still-alluring Bacall knows how to play noir (she was in enough of them with her husband, Humphrey Bogart, in the 1940s), and her magnetic presence makes us rue the fact she doesn’t have more scenes. The gorgeous Tiffin looks like she wandered in from a James Bond movie (she would have made a great Bond girl), and the hunky Wagner displays the debonair charm that would translate so well to TV a few years later in It Takes a Thief (one of my favorite shows as a kid). Leigh tries to inject the thankless wife role with some complexity and achieves a modicum of success, but the normally dignified Julie Harris goes way over the top as a desperate heroin addict on the skids. All of those fine actors and Shelley Winters, too! As a boozy, sloppy, over-the-hill movie star married to a sadistic scumbag (Robert Webber), Winters is by far the film’s most colorful character, and she tries her best to steal the show.

Harper was a big hit at the time of its release, and Newman even reprised the character nine years later in 1975’s The Drowning Pool co-starring his wife, Joanne Woodward, and a young Melanie Griffith. (Look for that Blu-ray review in this space in the coming weeks.) Unfortunately, the film just doesn’t hold up as well as its older and more authentic noir cousins. Thanks to Newman, Harper holds his own, but when I’m in the mood for noir, I prefer a shot of Philip Marlowe neat.

The only disc supplements are an audio commentary with screenwriter William Goldman and the movie’s original theatrical trailer. 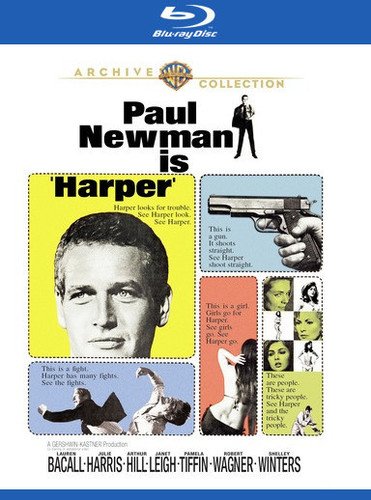