They wants the precious! They really wants the precious!! Last week, we offered you the chance to win ‘The Hobbit: An Unexpected Journey‘ on Blu-ray, and you turned out in force with a lot of great contest entries. The time has come to reveal the winner. Let’s take this journey together, shall we?

As explained in the original post, our challenge was to come up with a funny or clever caption for the following photo. 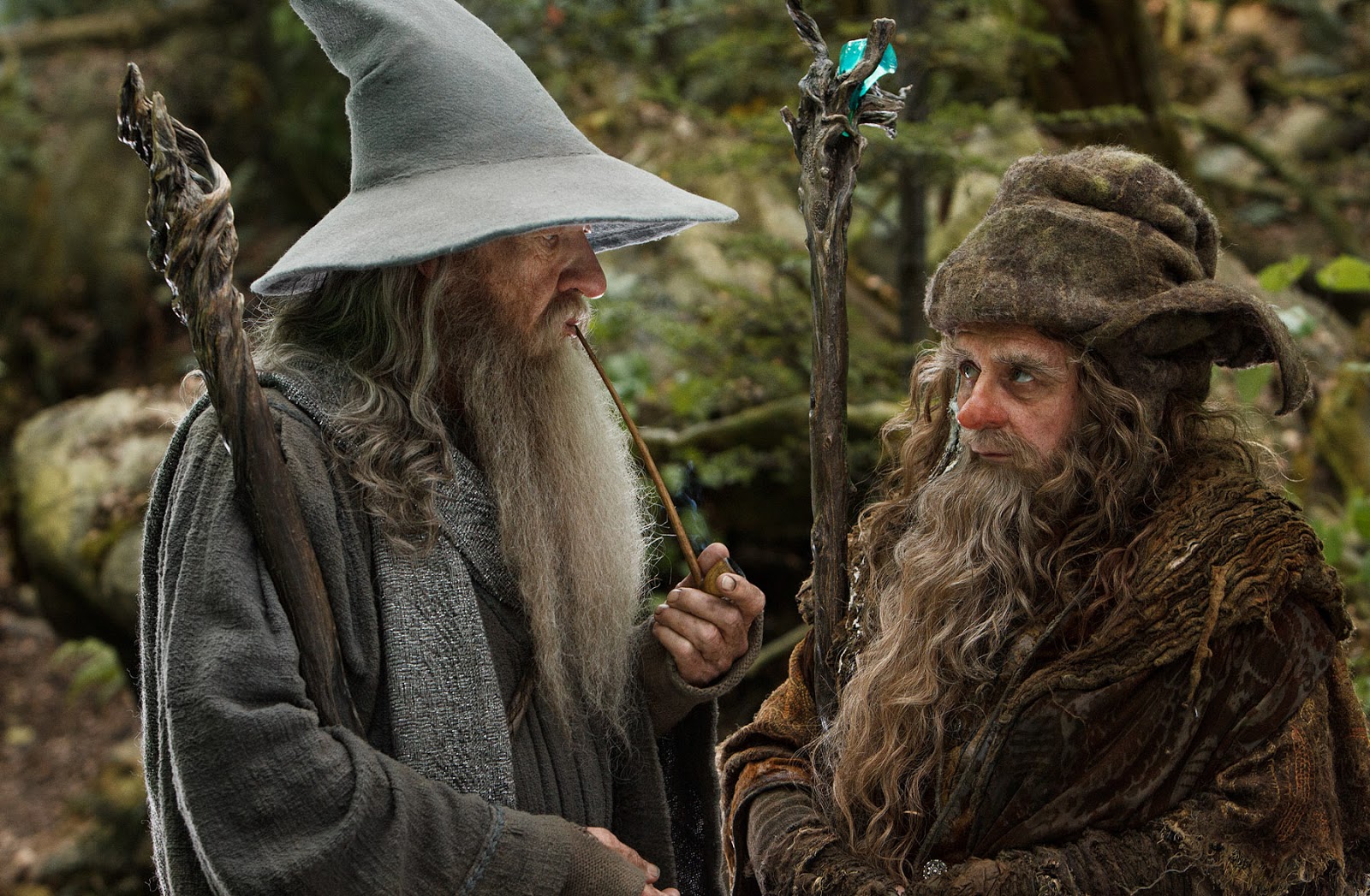 Boy, did you ever! We received a ton of hilarious submissions. Here is just a small selection of our favorites.

“What is your quest?”
—-”To seek the treasure of Smaug”
“What is your favorite color?”
—-”Gray”
“What is the air-speed velocity of an unladen swallow?”
—-”What do you mean? An African or European swallow?”
“I don’t know that”

“What are you Tolkien about?”

Galdalf: “Why are you called ‘Radagast the Brown’?….”

Mick and Keith consider another tour.

R: Say Gandalf, I have these eagle friends…
G: No No… No thank you.. that would be way too easy.

Everybody crazy for a Sharp Dressed Man!

What can Brown do for you?

In this publicity still from LINCOLN, two congressman from Kentucky discuss their issues with the Thirteenth Amendment.

Gandalf – “Where do you go to get your robe cleaned? I need a new place. I brought this in white and just look how it came back!”

Gandalf: We have got to get you a pointy hat. That’s just Wizard 101.

Hey, you gonna bogart that or pass it along?

Gandalf: “I find that a strong pipe tobacco does wonders to mask the horrid stench of not bathing for centuries.”

Blue Wizard 1: Why can’t we pick our own colors?
Gandalf: No way, no way. Tried it once, doesn’t work. You got four guys all fighting over who’s gonna be the Black Wizard, but they don’t know each other, so nobody wants to back down. No way. I pick. You’re Blue Wizard 1. Be thankful you’re not Yellow Wizard.
Radagast: Yeah, but Brown Wizard is a little too close to Wizard Sh*t.
Saruman: Who cares what your name is?
Blue Wizard 2: Yeah, that’s easy for you to say, you’re the White Wizard. You have a cool-sounding name. Alright look, if it’s no big deal to be Blue Wizard 2, you wanna trade?
Gandalf: Hey! NOBODY’S trading with ANYBODY. This ain’t a goddamn, [email protected] Council of Elrond meeting, you know. Now listen up, Blue Wizard 2. There’s two ways you can go on this job: my way or the road to Mordor. Now what’s it gonna be, Blue Wizard 2?
Blue Wizard 2: Jesus Christ, Gandalf, [email protected] forget about it. It’s beneath me. I’m Blue Wizard 2. Let’s move on.
Gandalf : I’ll move on when I feel like it… All you guys got the goddamn message?… I’m so goddamn mad, hollering at you guys I can hardly talk. Pssh. Let’s go to work.

Seriously? “Abra Cadabra” is the best that you can do??

I know you want what’s in this pipe, but I SHALL NOT PASS it.

Gandalf: Your nose is awfully red and you look kind of unhealthy. You should see a doctor.
Radagast: Doctor Who?

“I know. Smoking is a bad hobbit I’m trying to break.”

I don’t get it. Why are all these men obsessed with jewelry?

Radagast – Gandalf, would you prefer to see troll boogers and rabbit sledding in 48 frames per second or regular?

It was when the two locked eyes that they realized true love had been right in front of them all along.

Gandalf, let me get this straight. You chose a hobbit for your adventure with the dwarves because hobbits are quiet and sneaky. But you let him use a sword that shines bright blue when orcs are near. It kinda defeats the purpose if you see what I mean.

On the next episode of Duck Dynasty, Willie and Si’ have a staring contest to see who gets to be the first to try Miss Kay’s frog leg pie.

With Easter just around the corner, this entry from Tom A. really hit my funny bone:

Gandalf: That whole regenerating thing sounds awfully complicated. I think if I ever die and come back, I’ll probably just change my robe or something.

Congratulations to Tom for winning ‘The Hobbit’ on Blu-ray, and thanks to everyone else for participating. If you didn’t win this one, don’t forget that you still have a chance to win ‘The Borgias: The Complete Second Season’ this week, so get your entries in for that contest soon.