Another week, another contest. We’re not ready to stop giving away stuff yet. This week, courtesy of our friends at Dolby Labs, High-Def Digest would like to offer you the chance to win ‘The Borgias: The Complete Second Season‘ on Blu-ray. That’s ten hours of juicy scandal and intrigue, yours for free. What a bargain! All we ask in return is that you make us laugh.

With a new pope recently anointed in real life, Showtime’s historical soap opera ‘The Borgias’ seems more topical than ever. The series follows the exploits of conniving Pope Alexander VI (Jeremy Irons) and his duplicitous family as they struggle to maintain power at the turn of the 16th Century. The show will return for its third season on April 13th, so now would be a good time to catch up.

The Blu-ray contains Dolby TrueHD 5.1 soundtracks on all ten episodes. Lest you assume that lossless audio isn’t all that important for a TV show like this, Dolby Labs has provided an informative Audio Lover’s Guide to the season written by the show’s Re-recording Mixer. Be sure to give that a read.

To win the box set, all you have to do is participate in our photo caption contest by giving us a funny or clever caption for the following image. Click to enlarge: 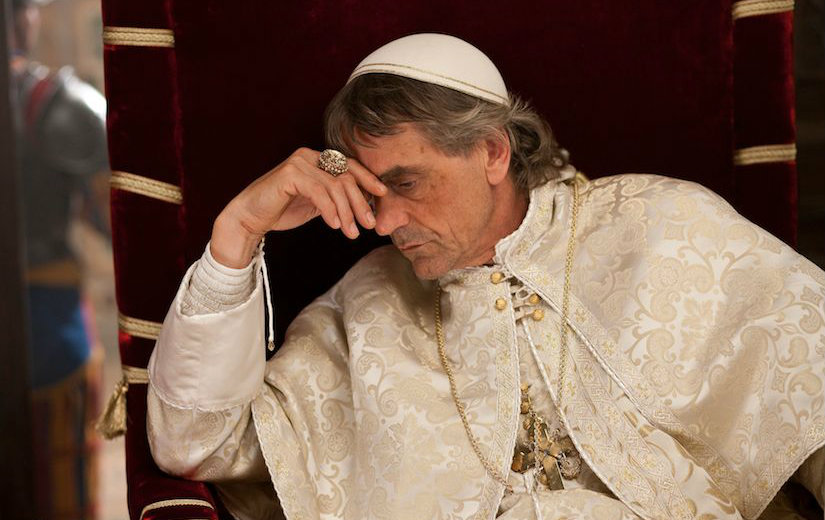 For example: “Too… many… Jello shots… last night…”

We have one copy of the Blu-ray set to give away. The winner will be chosen at our own subjective discretion based on whichever responses we enjoy the most. Entries are limited to 10 per person. That should give you plenty of opportunity to craft a good submission, but will also help us to avoid any potential appearance of awarding prizes based on volume rather than quality. (Please heed this limit. You will be taken out of consideration if you submit more than 10 entries.) All entries must be submitted in the Comments section of this blog post. Please do not attempt to email them to me.

The deadline for entry is Friday, March 29th. The winners will be announced the following week. Good luck!