Since the inception of Dolby Atmos for the home, many home theater enthusiasts have debated the need and virtues of upgrading their current A/V receivers, questioning the new format’s effectiveness compared to traditional 5.1 or 7.1 surround sound. Warner Bros.’ new Diamond Luxe Edition of ‘Gravity’ provides our first opportunity to make a direct head-to-head comparison between a Dolby Atmos soundtrack and a dedicated 5.1 mix (found on the older Blu-ray release) for the same movie. The differences between them are enlightening.

Since making the Atmos upgrade myself a few months back, I can honestly say it was very worthwhile and sounds fantastic in my home. For me at least, the bigger issue is finding enough Blu-ray titles that capably demonstrate the awesome multidimensional experience of this object-based surround sound technology. Currently, there are eight Atmos Blu-ray discs available, and the desire to purchase any of them, of course, varies with the viewer’s taste. Personally, half of them are movies I’m not rushing to see, let alone buy, but since the selection is so small at the moment, I own all but two. ‘Unbroken‘ isn’t on my radar anytime soon, and ‘Step Up All In‘ is not my cup of tea and will not likely ever be watched. Unless tasked with providing coverage, I’m honestly okay without ever owning either of those. Instead, my eyes – or rather, my ears – have patiently waited for the arrival of Alfonso Cuarón’s ‘Gravity’ since it was announced in November that the double-dip special edition would feature a Dolby Atmos soundtrack. Speaking for myself, I’ve been in anxious anticipation to hear it.

With the Diamond Luxe Edition, Warner Bros. has reissued the award-winning sci-fi thriller as a two-disc package inside an attractive gatefold NEO Pack case. Each thick, hardy panel has a nice shiny, reflective surface like a piece of glass, and the two region-free BD50 discs sit comfortably on opposite panels with a small lip to hold them in place. It’s a beautiful package, but of course I’m not here to write about that. Instead, I want to compare the last year’s Blu-ray 3D release of the movie, which had a DTS-HD Master Audio 5.1 soundtrack, to this new Dolby Atmos mix with a TrueHD 7.1 core. Initially, I expected the differences to range from minor to a slight improvement at best. I especially wanted to use and compare the Dolby Surround Upmixer (DSU) feature in my receiver, since I’ve found that it does a surprisingly satisfying job of matrixing standard 5.1 and 7.1 soundtracks to my overhead speakers. 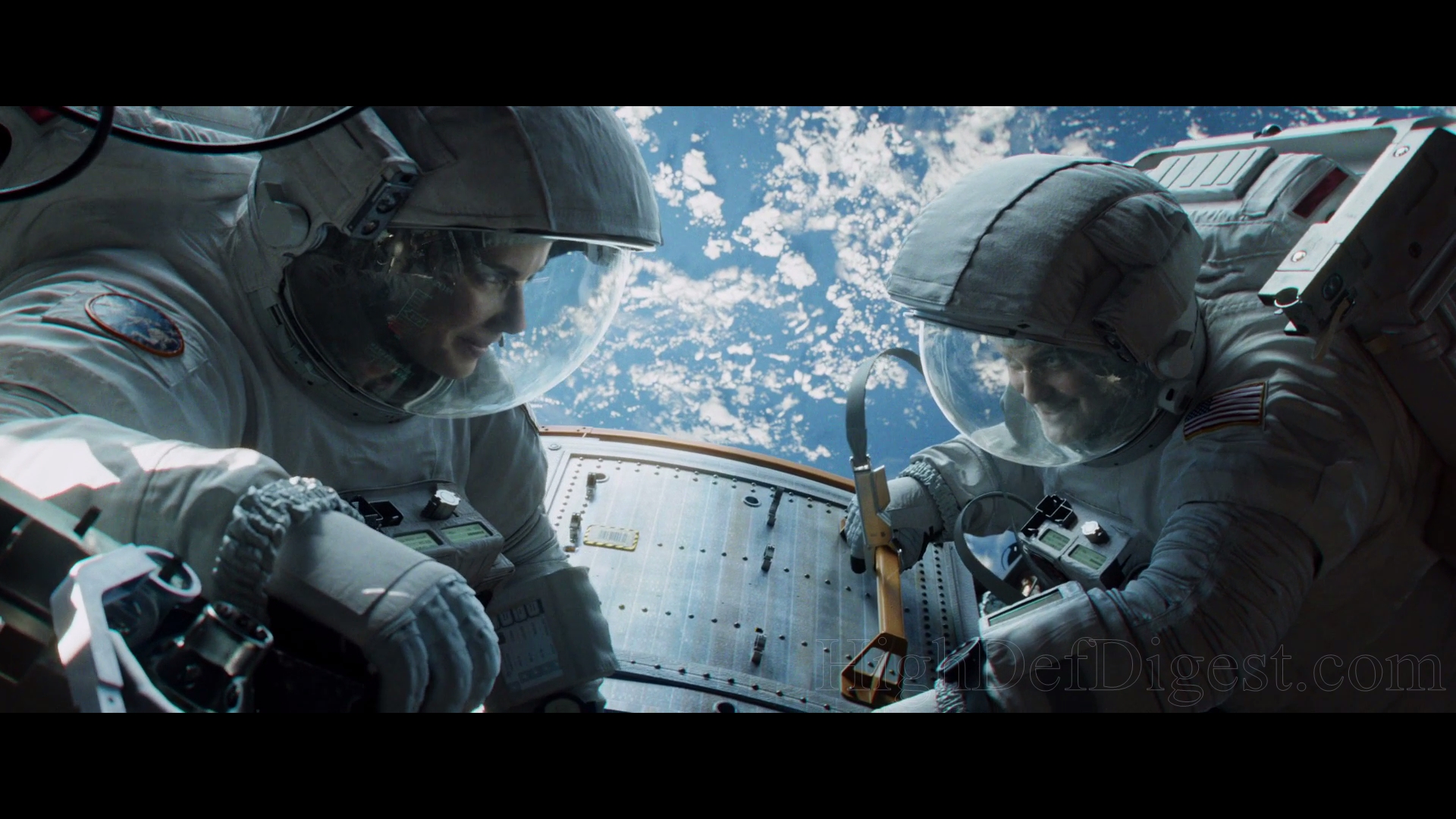 First, I should explain the excitement and ballyhoo of hearing ‘Gravity’ in lossless audio. Simply put, it’s DAMN good. In fact, it’s one of the best sound design mixes created in years. The praise and accolades for it are warranted. The people who worked on the mixing and editing did a phenomenal job with the story set in space, where there is no sound. Silence is effectively used for creating edge-of-your-seat suspense, but when sound does occur, it’s very selective and intentionally located, as demonstrated when the voices of the cast move in all directions at the film’s start. With the beautifully haunting, organic and ethereal music of Steven Price, we also have a score that pulls audiences into heart-pounding tension.

There’s a genuine excitement to hear and appreciate all this on Blu-ray, even in its DTS-HD Master Audio 5.1 configuration with DSU implemented, but the chance to listen in Dolby Atmos is twice as exciting. After spending some with both tracks, going back and forth between them and comparing individual scenes, I’m shocked to say that there’s a significant, night-and-day difference, and that the Atmos version decidedly wins hands-down. It offers one of the most immersive audio experiences of recent memory, and is easily a top demo choice for any home theater. Most notable is Price’s score. Where before his mesmerizing music only lightly bled to the speakers above, it now fills the entire room with an absorbing dome-like effect. One of the more jaw-dropping segments is the destruction of the International Space Station. Despite the lack of sound effects, specific musical effects whizz overhead to keep viewers on the edge as other aspects of the orchestration engulf the listening area with stunning clarity.

If Price’s score isn’t enough to convince high-def enthusiasts of Atmos’ virtue in the home, the rest of the outstanding soundtrack should definitely do the trick. The film’s first ten minutes deliver one of the coolest uses of surround speakers with various voices moving about everywhere. The 5.1 mix will please most, but that same movement around the room is nowhere near as convincing as it is in Atmos. This is most apparent between 4:05 and 4:40 as George Clooney plays a country tune and circles around the room. Even with DSU engaged, the music only lightly glides to the back of the room, but suddenly jumps to the right before appearing again in the front. However, in Atmos, the song smoothly floats from the left side to back overhead, to above in the right, before the character drops into view in the top right corner. All the while, Ed Harris’s voice also travels from the front left to above the listening area as the camera tilts to close-in on Sandra Bullock. In 5.1, Harris is only heard in the front left and simply moves to the center. 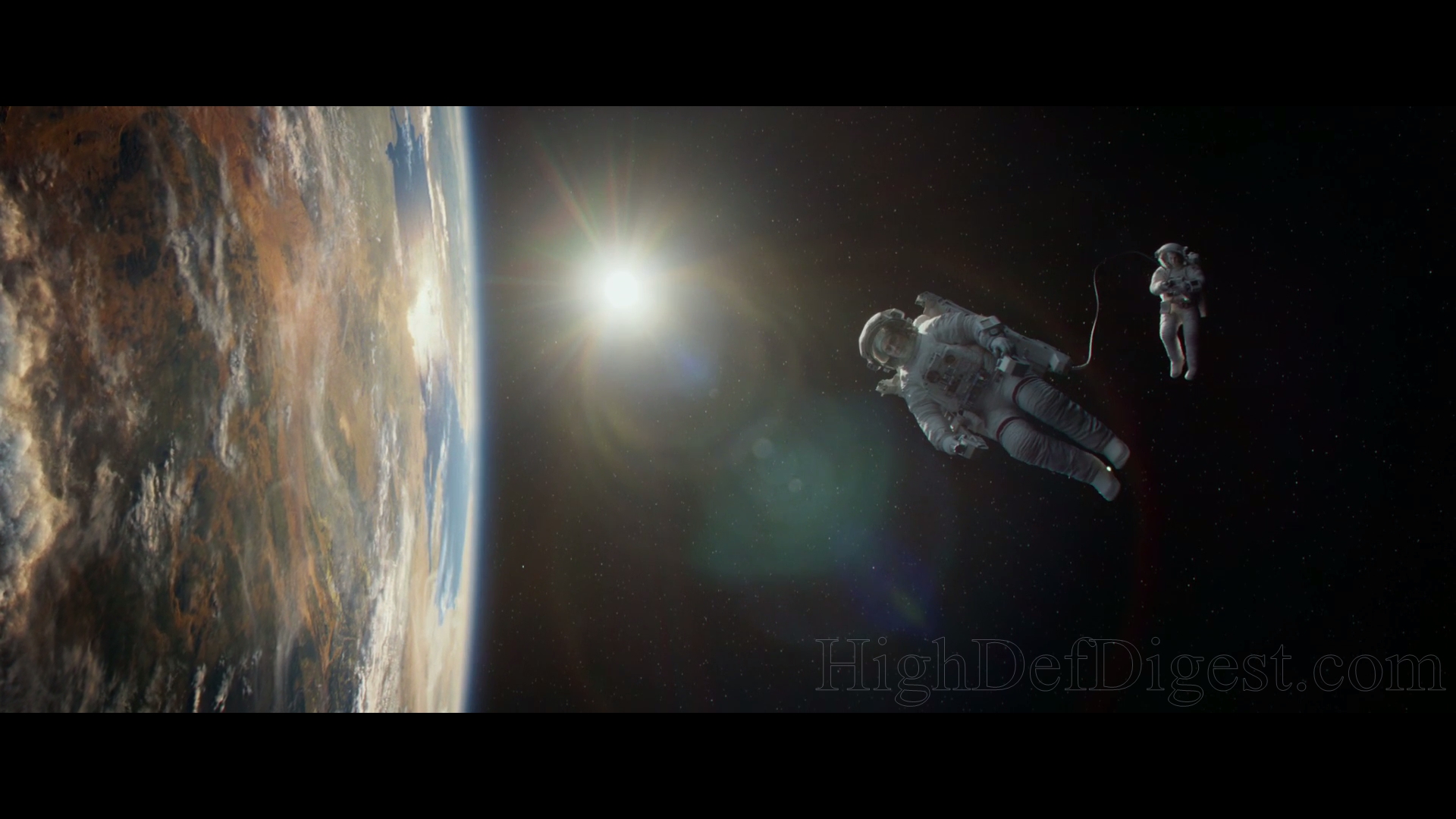 The use of voices in the film is rather ingenious because their diegetic movement is meant to emulate what Bullock’s character hears. This effectively creates for viewers the feeling of wearing a helmet like she does. One of the more impressive moments is when Mission Control orders the STS-157 crew to abort the mission due to the oncoming debris, starting at the 9:50 mark. DSU does fine during this four-minute sequence as the worried voices of Harris and Clooney pan from front to back and bounce off the sides. Still, the Atmos track bests it as those same voices convincingly fill the space above the listener’s head. Then, Clooney’s voice flawlessly swings across the back of the room to the front as Bullock somersaults into space. Almost immediately after, when Bullock starts breathing again at around 14:20, the camera slowly pushes in on her face, breaking through the helmet’s glass, and her anxious breathing is heard from above mixed with various static noises. Meanwhile, the 5.1 mix place these same sounds in the lower front soundstage.

Remarkably, this is only the beginning of the movie. Looking at my notes, I found a few noteworthy segments with DSU on, whereas in Atmos I made a long list of time codes I could spend more time gushing over.

I’ll quickly run through a few scenes where Atmos is a big improvement over its predecessor, starting at around 33 minutes when Kowalski instructs Ryan to enter the ISS. When she finally does (38:10) and removes her garments, they bounce all around the airlock. The fire eruption inside the ISS sequence (44:20) sounds as if it engulfs the room, and while inside the Soyuz (44:53 – 46:10), various loud, crashing explosions slam overhead. Later (55:15), Ryan pushes buttons right above the listening area. During her race to the Shenzhou capsule inside the Chinese space station (1:13:30), various noises surround the viewer and continue with several bumps and rattles (1:15:55), creating an awesome dome-like soundfield. The whole thing finally finishes when Ryan emerges from the water (1:21:15) with the lifelike sounds of local wildlife and a fly buzzing in the air above.

Needless to say, I was incredibly mesmerized and taken aback by the Dolby Atmos mix of ‘Gravity’. It’s not only a significant improvement over its DTS-HD MA 5.1 alternative, but it’s a surprisingly better demonstration of the new audio format than the ridiculously bombastic and obnoxiously loud ‘Transformers: Age of Extinction‘ or ‘Teenage Mutant Ninja Turtles‘.

DSU upmixing of the 5.1 version is a competent enough effort with many good moments where the front and rear heights deliver pleasing effects, but after spending a couple days toggling back and forth, it honestly doesn’t compare to the discrete directionality of the Atmos soundtrack, which creates a satisfyingly believable dome-like soundfield. Whereas effects tend to be localized in the 5.1 track, atmospherics seem unbounded and ubiquitous in this new object-based sound format as objects move within a realistic and broad space. ‘Gravity’ in Dolby Atmos has become my new go-to demo disc.