Constant Image Height projection may still be a small niche within the home theater hobby, but its advocates (myself included) are passionate about the benefits of a proper “scope” presentation for movies on a 2.35:1 screen. One potential drawback of this practice, however, is the limited resolution available on a letterboxed Blu-ray disc. A new process called Folded Space may provide a solution to this problem by “hiding” additional pixels within the video image.

In order to save time, rather than explain the concept of Constant Image Height (“CIH”) display here, I’ll direct readers back to a tutorial on the subject that I wrote a few years ago. Long story short: A movie with a 2.35:1 aspect ratio is designed to be displayed larger and wider than a movie (or TV show) with a narrower 1.85:1 or 1.78:1 aspect ratio, but our current 16:9 HDTV standard reverses that dynamic. On most home theater screens today, your typical episode of ‘Two and a Half Men’ occupies more screen real estate and is more immersive than any of the ‘Star Wars’, ‘Indiana Jones’ or ‘Lord of the Rings’ movies, and that just seems like a crime. CIH display restores both types of content to their intended perspective.

Unfortunately, in a lack of foresight, the developers of the Blu-ray format failed to take the needs of CIH viewers into account back in the day. Blu-ray discs are encoded with a resolution of 1920×1080 pixels and an aspect ratio of 16:9. (Technically, a small handful of discs [mostly porn] may be encoded at only 1280×720 resolution, but that also comes to a 16:9 ratio.) If a particular movie has a photographic aspect ratio other than 16:9, it will be authored with black bars around the image (either letterbox bars above and below, or pillarbox bars on the sides) to buffer it within the 16:9 frame. Thus, a 2.35:1 movie only uses approximately 1920×810 of the available pixels, and the rest are wasted on the empty letterbox bars.

CIH projection viewers currently have two options to deal with this: 1) Zoom the image to fill the width of the 2.35:1 screen, and let the letterbox bars spill off the top and bottom. Or, 2) Add an anamorphic lens in front of the projector, which will horizontally stretch the picture to fill the screen width, and then use a video processor (or the CIH mode in many modern projectors) to crop off the letterbox bars and scale the image to fill the vertical height. 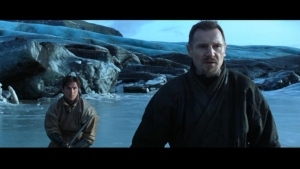 Both methods have their advantages and disadvantages. Although the scaling/lens option will technically utilize all 1920×1080 of the display’s pixels, the additional pixels are interpolated, not true picture detail.

Unlike the DVD format, which was designed to accommodate two different display ratios (4:3 and 16:9), Blu-ray offers no provision for anamorphic enhancement on movie discs. CIH users have advocated for the addition of 21:9 enhancement, but a lack of backwards compatibility in existing Blu-ray hardware has made that seem very unlikely – until now.

Folded Space is a division of Panamorph, Inc., a manufacturer of anamorphic lens attachments for home theater projectors. In an attempt to improve the resolution of scope format movies on Blu-ray, the company has developed a new technology called Multi-Format Encoding (or “MFE”) that it claims can be authored onto Blu-ray discs so that a single disc will output video in any of four different playback qualities:

How does it work? According to the press release:

Folded Space’s software employs proprietary algorithms to generate and store additional resolution which is hidden within the black bars above and below the letterboxed image of the movie. This new encoding approach allows Blu-ray players and similar HD devices with Folded Space decoding algorithms to play MFE content in three additional resolution modes with no black letterbox bars…

In all cases, the decoded content provides a true 33% increase in actual resolution while the enhanced 2560 mode extends this increase to approximately 50% using new estimation algorithms. MFE content is playable on existing devices providing a high quality letterbox version of the movie without requiring the decoding algorithms.

I glean from this the following points:

Naturally, in order for this to work, movie studios will need to author new Blu-ray discs in MFE format from higher-resolution sources (presumably downconverted 4k masters?), and hardware manufacturers will need to integrate the feature into Blu-ray players. How long it will take for Folded Space to line up those strategic partnerships, and how well will the process really work? Those answers remain to be seen. We may still be a ways out from having live samples to test, but at the very least, this sounds like a promising development.