It’s been a while since I last provided an update on my ongoing attempt to expand my home theater beyond the conventional channel limits allowed by Dolby Atmos or DTS:X. Never satisfied, I’ve now crammed 17 speakers into my room. If you can believe it, in some ways this has actually simplified matters since my last attempt. Of course, in other ways it’s even more ridiculous.

I started this grand folly almost two-and-a-half years ago, when my receiver at the time maxed out at the typical Dolby Atmos limit of 11 channels, in a 7.1.4 configuration. Wanting to extend that to six height channels, I implemented a convoluted system involving two additional A/V receivers to extract Top Middle channels from between the Top Fronts and Top Rears. You can read about that in previous installments of this series.

Last year, I upgraded my receiver to the flagship Denon AVR-X8500H model, which is capable of decoding 7.1.6 channels all on its own. In theory, this should have solved all my problems, allowing me to get rid of all that excess equipment and streamline everything into one processor. For me, though, it’s never so simple. Whenever I have things right where I thought I wanted them, I suddenly want something else. The upgrade itch is never quite scratched.

This time around, my urge to change things up was motivated by a bargain I scored on a set of four new speakers to replace my prior Surround and Surround Back sets. I wasn’t so bothered by pulling the old Surround Backs out of service, but my Surrounds at the time were actually pretty nice speakers that tonally matched my front towers, and which I had only recently acquired not long before. I just hated the idea of sticking them into storage or selling them off. I wanted to find a way to make use of them, and I thought that perhaps this was finally the time to experiment with Front Wide speakers.

I considered this idea a few months ago, but discarded it as not feasible with my receiver. For all of its processing power, the Denon X8500H is limited to 13 channels of decoding, at either 7.1.6 or 9.1.4. The former means I couldn’t use Front Wides, and the latter means I’d have to give up a pair of height speakers. I wasn’t willing to do that at the time.

However, the idea kept gnawing at me, and I still have those extra A/V receivers. If I configured for 9.1.4 and then extracted Top Middles via the “Scatmos” method I’d used earlier, that should work, right? Well, almost…

What I’ve just described would in fact work when playing a Dolby Atmos soundtrack, but would not work when watching 5.1, 7.1, or other legacy soundtrack formats upmixed using the Dolby Surround Upmixer feature in the receiver, which never utilizes Front Wide channels. Those speakers would be silent, and since actual Atmos only accounts for a small minority of the content I watch, that seemed fruitless.

Fortunately, the DTS Neural:X upmixer will utilize Front Wide channels. That’s an advantage in DTS’ favor and seems like an easy solution. Sadly, both Neural:X and the DTS:X formats are currently hard-locked to an 11-channel limit. If you turn on Front Wide speakers, you’re forced to give up either the Surround Back channels or one pair of the height channels. The only workable options are either 5.1.4(+W) or 7.1.2(+W).

I’m not ready to give up Surround Backs. First off, I just bought new speakers to put there. Moreover, removing those would leave a huge auditory hole in the back of my room. That’s not happening.

I’ve gone over every possible permutation of this, and what I’m left with is needing to manually switch between two separate configurations. When listening to a genuine Dolby Atmos soundtrack, I can enable all 7.1.4(+W) speakers. But for anything else, I have to scale down to 7.1.2(+W) and use Neural:X for upmixing. With only one pair of active height channels, that means Top Middle extraction won’t work.

Here’s a look at my room layout: 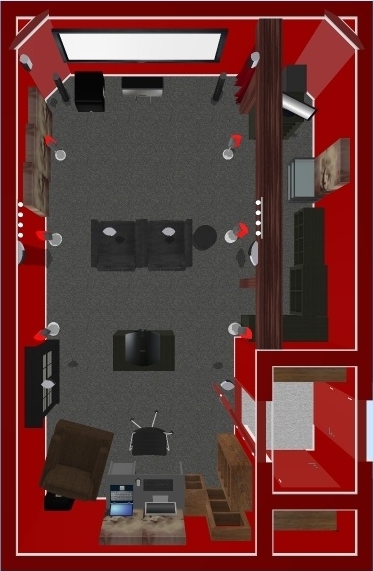 And here it is with the speakers labeled: 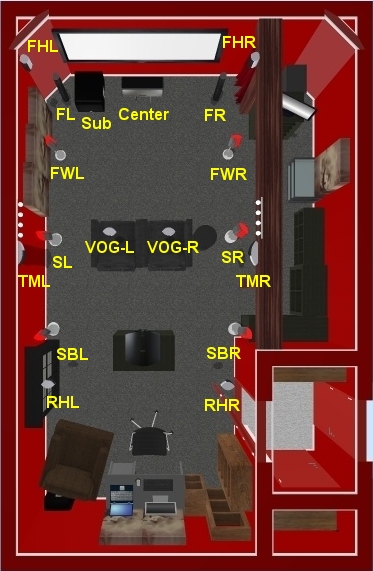 That’s a lot of speakers. Getting them all to work at the same time is tricky and requires some compromises.

For a long time, I’ve been stuck on the idea that the only way to properly do six height channels in Atmos is with discrete Top Front, Top Middle, and Top Rear speakers. Indeed, that may be the ideal. Giving this some hard thought, however, I’ve come to the conclusion that, in my room, the speakers I was calling “Top Rear” (but which actually more closely align with a Rear Height position) are very far behind my seats and hardly ever noticeable in movie content. Both the Front Height/Top Front and the Top Middle channels are much more important in this space and deserve to be prioritized. In fact, activating the Top Rears draws a lot of sounds away from the Top Middle speakers, thinning out the soundstage above my head.

This doesn’t mean that I’ve decided to abandon the Top Rear/Rear Height speakers that are already installed on my ceiling, just to de-prioritize them. They’ll still produce some sound, but mostly just ambient and atmospheric effects to fill the space, not as many critical sound effects.

How do I do that? I’ve put one (just one) of my spare A/V receivers back into service. In my primary X8500H receiver, I configure for 9.1.4 speakers, with Front Height and Top Middle designations. The signal for my Top Middle speakers is sent through that receiver’s pre-outs into the stereo inputs on the secondary receiver, which uses ProLogic II to extract a common center that gets spread to my two Voice-of-God speakers in an array, and then pulls some diffuse sounds to its “Surround” channels (my Rear Height speakers). 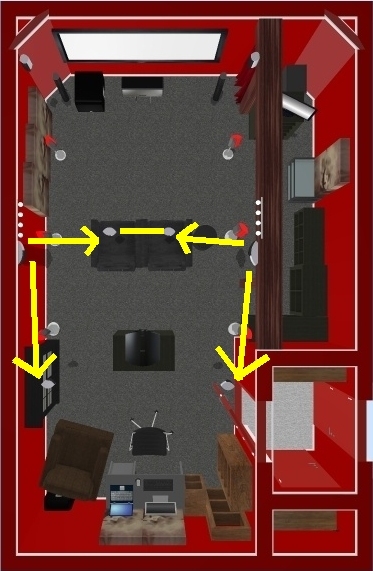 This is actually very similar to a process I used a long time ago, before I went full Scatmos, but I’ve learned a lot since then about how to do the extraction properly, so it should work better now, especially since I’m in a mental headspace that the Rear Height speakers are just an add-on bonus and not a critical part of the soundstage.

As mentioned, Neural:X and DTS:X are limited to just two height channels of sound once I engage the Front Wide speakers. In the X8500H’s setup menus, I manually change from this: 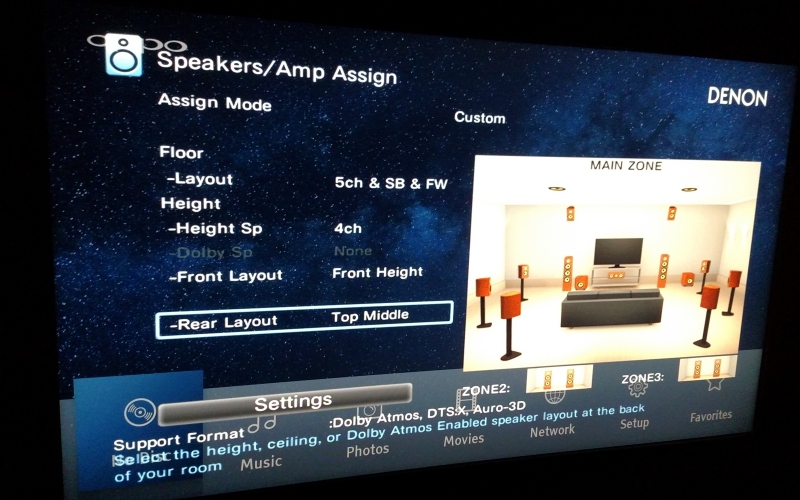 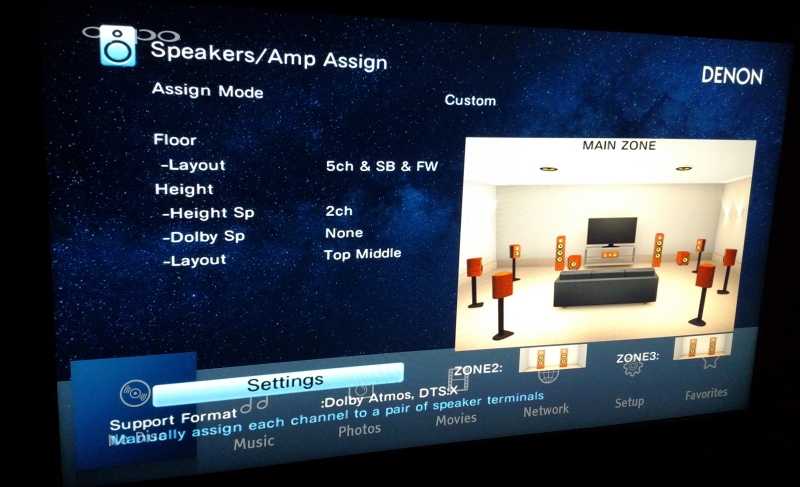 If I designate the two height channels as Top Middle, this allows me to continue to use the secondary AVR for the extraction to the Voice-of-God and Rear Height speakers. That just leaves the Front Heights unused… or did, until I discovered this: 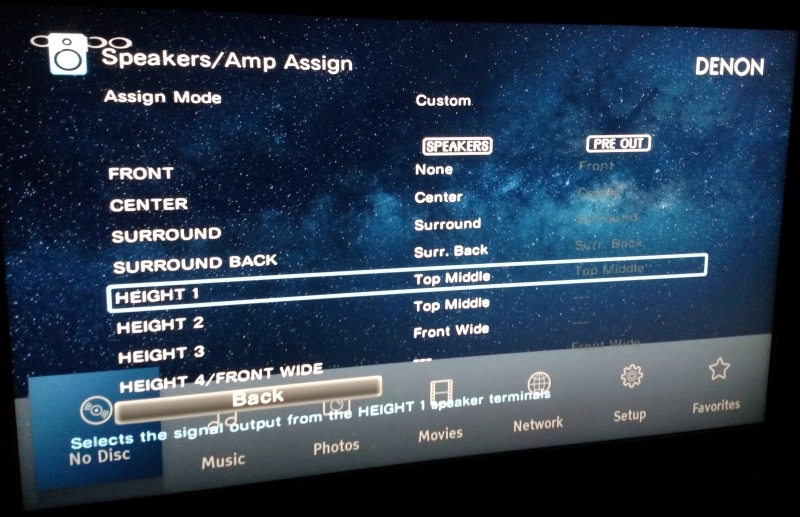 In the X8500H’s Amp Assign/Settings sub-menu, I found that it’s possible to assign both the “Height 1” outputs (connected to my Front Height speakers) and “Height 2” (connected to my Top Middles) as Top Middle simultaneously, meaning that the same sound will play from both sets of channels. This may lack the front-to-back panning ability of Atmos or DTS:X when using four discrete heights, but it’s effectively the same as what the Dolby Surround Upmixer (which really only has two height channels spread across the left and right sides of the room) does. That’s not so bad. I can live with that, especially for upmixed content. And DTS:X accounts for such a tiny fraction of my Blu-ray collection that it’s hardly worth fretting about.

Frustratingly, after switching from four height channels to two, the X8500H automatically changes the pre-out assignment for the Top Middle speakers from Height 2 to Height 1 and does not allow this to be changed back. That means I need to keep two sets of cables connected, one pair to the Height 1 pre-outs and another to the Height 2 pre-outs. Those go into separate inputs on my secondary AVR, and I have to remember to change that setting also when I’m doing the rest of this.

To be sure, all this manual changing of settings is a pain in the neck, and there’s no good way to automate it. The Denon X8500H does not allow you to save two different speaker layouts as presets. The best I could do is save each configuration profile to a USB thumb drive and load them when needed, but that would take as long or longer than adjusting the settings individually, so there’s little point in it.

On the other hand, this new system layout has allowed me to streamline my hardware components, removing one of the extra A/V receivers, as well as a pair of stereo-to-mono converters and a mini-amp (both explained in Part 4 of this series), not to mention a bunch of cables. It winds up being a net wash, as far as complication goes.

Things will be a lot easier for me if Dolby ever enables use of Front Wides with the DSU upmixer or DTS breaks from its current 11-channel limit (preferably both). 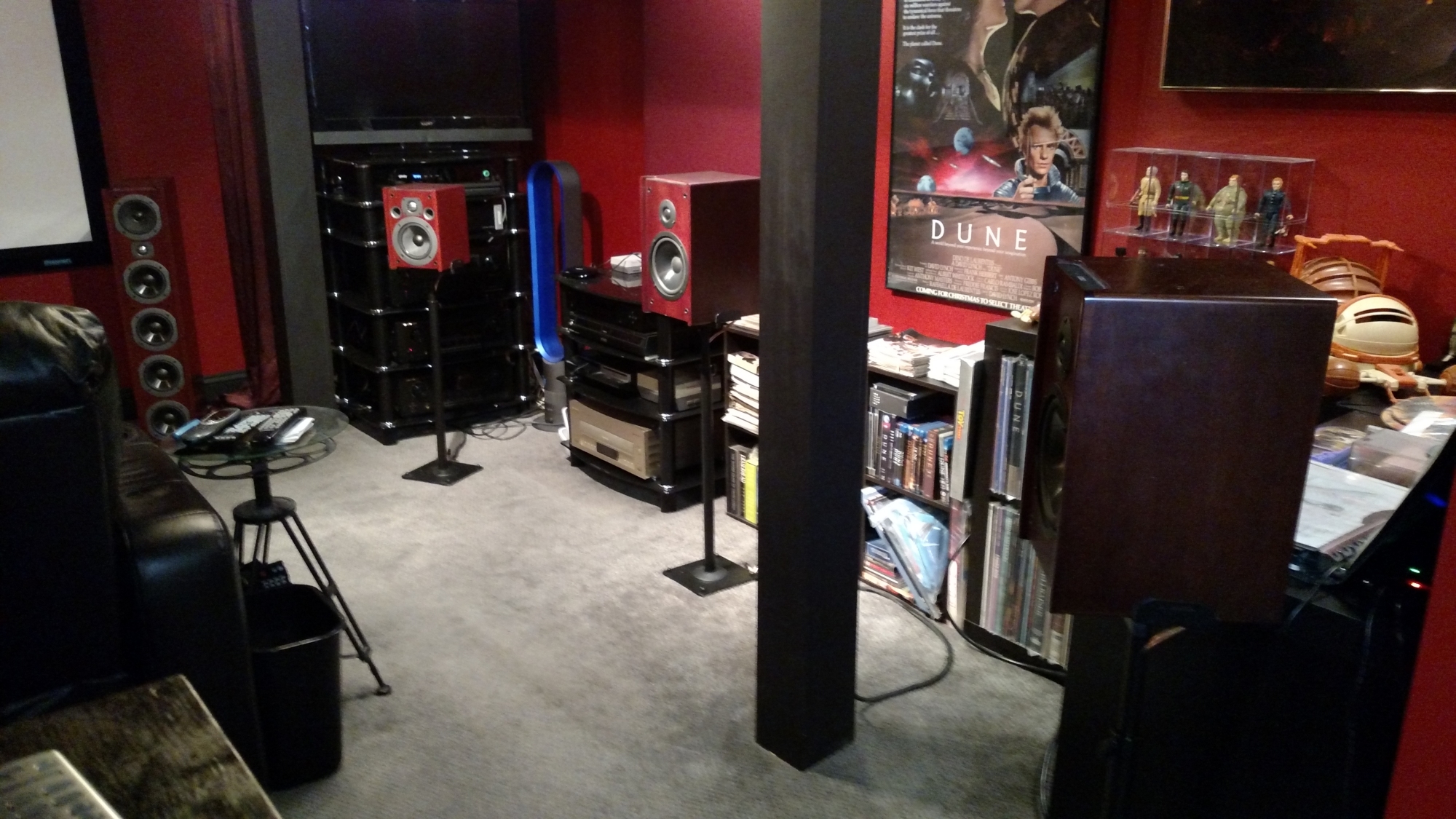 Having done all this, was it worth the effort? I’d like to say so, but I’m not sure that I’ve settled on an opinion about the Front Wide speakers yet. I know that a lot of people love and swear by them, but I think perhaps I need to get used to them a little longer. The thing I notice most about them is that music typically gets spread wider across the front soundstage, which can be appealing at times but feel gimmicky at others. I don’t often notice discrete sound effects there, but panning movements from Front to Surround (such as a car driving toward the back of the room) are often impressively smooth and seamless, without a noticeable jump from speaker to speaker as I may have experienced previously. I like that.

The reduction from six discrete height channels to four (for Atmos) plus a little non-specific ambience hasn’t bothered me much so far. If anything, shifting the weight from my Rear Height speakers to Top Middle has been an improvement. For upmixed content, DSU only ever had two effective channels in the heights, so I haven’t actually lost anything there. However, aside from being able to use the Wide channels now, I’m not as much a fan of using Neural:X for upmixing as I was for DSU. Although the DTS algorithm often pulls more sound info to the height channels, I frequently find that it’s too much and boosted too loud in volume, to the point that it’s distracting. All things considered, I’d rather use DSU, if only it supported Front Wides.

For the time being, I’m going to settle in with this and do a lot more listening before I come to a final conclusion. I doubt that I’ll take away the Front Wide speakers, but I also have no doubt that I’ll want to change things up again at some point later. That’s an inevitability in my home theater.