Packaging special edition Blu-rays isn’t easy for movie studios, especially in these challenging economic times. They’re expensive to produce, sport a hefty price tag (even when discounted by outfits like Amazon.com), and often have a limited appeal. In addition, they pose some dilemmas for consumers. First is the question of weighing a title’s bang-for-the-buck quotient. (I mean, do I really want to spend $70 on one special edition or use the same amount to purchase three “regular” releases?). After that, there’s still the matter of finding a place to store an unwieldy box set. Space-saving, attractively priced, and handsomely produced Digibooks just might be the solution many of us have been waiting (and pining) for.

Even when the economy is in the pink, cash comes at a premium for film buffs. So does shelving. Some rabid collectors won’t budge when it comes to relinquishing prime real estate for a space-hogging, elephantine edition – even if we’re talking about such classics as ‘Gone With the Wind‘, ‘The Wizard of Oz‘, and ‘Casablanca‘. While I personally love big, elegantly appointed box sets – especially if they’re packed with meticulously reproduced archival material (Studio memos from David O. Selznick? Glossy scene stills? Original theater programs? Bring ’em on!!) – even I have found storing them to be a challenge. And let’s face it, most of us collectors are plagued by more than a hint of OCD. Disrupting the clean look of rows of shiny, uniform Blu-ray cases with an oddly shaped honker of a crate often drives us up the proverbial tree!

I hope that studios continue to shift toward the attractive, sleek and functional Digibook format to showcase their special edition product. In this era of disposable electronic media, Digibooks are a warm throwback to the days when cradling a hardcover volume in our hands could give us a feeling of substance and cultural grounding. For Blu-ray discs, the look, feel and even the smell of these Digibooks is totally unique, yet not too far removed – at least from a storage standpoint – from their plastically housed counterparts. 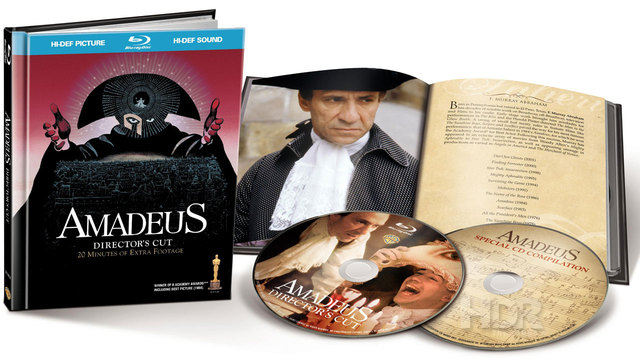 Digibooks are artistically designed, packed with photos in both color and black-and-white, and often feature behind-the-scenes stills, poster art, and other rarities. They enhance the viewing experience by allowing us to savor all aspects of a film’s artistry, from the director’s technique to the publicity campaign. Background essays on the production, cast bios, awards listings, and bits of trivia take us deeper into the movie. This helps place it in a proper historical context, and can heighten both its impact and our appreciation of it. (Some even come packaged with bonus soundtrack CDs.) I currently own only four Digibooks: Alfred Hitchcock’s ‘North by Northwest’, David Lean’s ‘Doctor Zhivago’, Milos Forman’s ‘Amadeus’, and George Cukor’s 1954 version of ‘A Star Is Born’. All are, and will be, cherished parts of my Blu-ray collection.

I believe that the Digibook format suits classic films especially well. By virtue of their written essays and varied content, Digibooks provide a greater degree of context and background than regular Blu-ray releases. This allows younger generations the opportunity to educate themselves about films of which they may only have a passing knowledge. Digibooks also lend any movie a weightier feel, both literally and figuratively.

And the number of titles available in the format continues to grow. Warner Home Video leads the pack in promoting Digibooks. In addition to the aforementioned ‘A Star Is Born,’ WHV has also announced ‘Elvis on Tour’, the 1933 ‘King Kong’, and Kenneth Branagh’s ‘Hamlet’ as future Digibook releases. Other studios are also beginning to embrace the format, which is good news for hardcore film fans. Below is a listing of currently available and upcoming Digibooks:

‘300: The Complete Experience‘
‘Amadeus‘
‘Batman: 20th Anniversary Edition‘
‘Bonnie and Clyde‘
‘Clash of the Titans‘ (1981)
‘Dirty Harry‘
‘‘Doctor Zhivago‘
‘Dr. Strangelove or: How I Learned to Stop Worrying and Love the Bomb‘
‘Easy Rider‘
‘Elvis on Tour‘
‘The Exorcist‘
‘Falling Down‘
‘Goodfellas: 20th Anniversary Edition‘
‘The Green Mile‘
‘Hamlet‘ (1996)
‘How the West Was Won‘
‘JFK‘
‘King Kong‘ (1933)
‘The Matrix: 10th Anniversary Edition‘
‘Midnight Express‘
‘Natural Born Killers‘
‘North by Northwest‘
‘One Flew Over the Cuckoo’s Nest‘
‘Poltergeist‘
‘A River Runs Through It‘
‘Se7en‘
‘The Shawshank Redemption‘
‘Silverado‘
‘A Star Is Born‘
‘Star Wars: The Clone Wars – The Complete Season One‘
‘Willy Wonka & the Chocolate Factory‘

Those are just U.S. releases. Even more Digibooks are available in Europe.

If you haven’t yet purchased your first Digibook, I encourage you to check out the format. But be forewarned… Like me, you just might become addicted to them.