Let’s stir up a little controversy, shall we? Drew’s recent review of ‘The A-Team’ sparked an interesting debate in the comments about whether macho action movies can (or should) be considered “homoerotic.” At the risk of offending someone, or possibly everyone, I think this is a topic worth exploring.

First off, some rules. The intent of this post is not to be a referendum either for or against homosexuality itself, or to make judgments about whether it’s good or bad, moral or immoral. Any comments made to that effect will be deleted posthaste. I will not tolerate any gay bashing, or anything that even remotely resembles hate speech, under any circumstances. At all. Further, any comments that try to bring religion into this will also be deleted without reservation. This is to be a discussion about movies, not about religious beliefs. In other words, behave yourselves.

So, with that said, I think the point that Drew was making in the review is that some manly action movies often have a latent undercurrent of homoerotic fixations. No, this doesn’t necessarily mean that the characters are gay. However, movies that fetishize sweaty muscle-bound men who spend an inordinate amount of time grappling with other sweaty muscle-bound men tend to leave themselves open to this sort of interpretation. It doesn’t help that these movies typically feature blatant misogynistic streaks as well.

Not all action movies are like this, of course. But some certainly are. The homoeroticism in ‘300‘ is undeniable. And not just because the story is set in ancient Greece. The movie’s about a bunch of ripped, attractive men wearing nothing but leather codpieces and capes rubbing up against one another for two hours. C’mon now….

A Google search pulled up this pretty amsuing argument for the overt homoeroticism of action movies in the ’80s:

Firstly, action films from the 80’s are all exceedingly homoerotic. It is an essential part of the given movie’s aesthetic. Sure, Steve Reeves took his shirt off in The Thief of Baghdad, but he spent most of his time chasing after the princess, not touching other men. Of course all of the heroes in 80s Action flicks talk like tough guys, but there is rarely any hetero-sex and by the end of the movie they are typically locked in mortal, lascivious combat with another muscular, shirtless man.

Sounds about right to me.

This brings to mind the macho silliness of ‘Tango & Cash‘ and ‘They Live’. The characters in the former bicker like an old married couple. And the latter features an utterly pointless (yet hilarious) five-minute fistfight that’s basically the equivalent of a gratuitous sex scene.

Quentin Tarantino has a bit part in the indie rom-com ‘Sleep With Me’ (bad movie, only worth watching for Tarantino’s scenes), in which he famously describes ‘Top Gun‘ as the greatest gay love story ever filmed. It’s hilarious, and has more than a little ring of truth about it. If nothing else, it surely explains why so much screen-time was spent on that volleyball scene.

However, not all viewers appreciate this sort of interpretation. One reader complained that Drew was reading too much into ‘The A-Team’. Our own Dick Ward says that he finds the “homoerotic” description to be an unfair cheap shot. 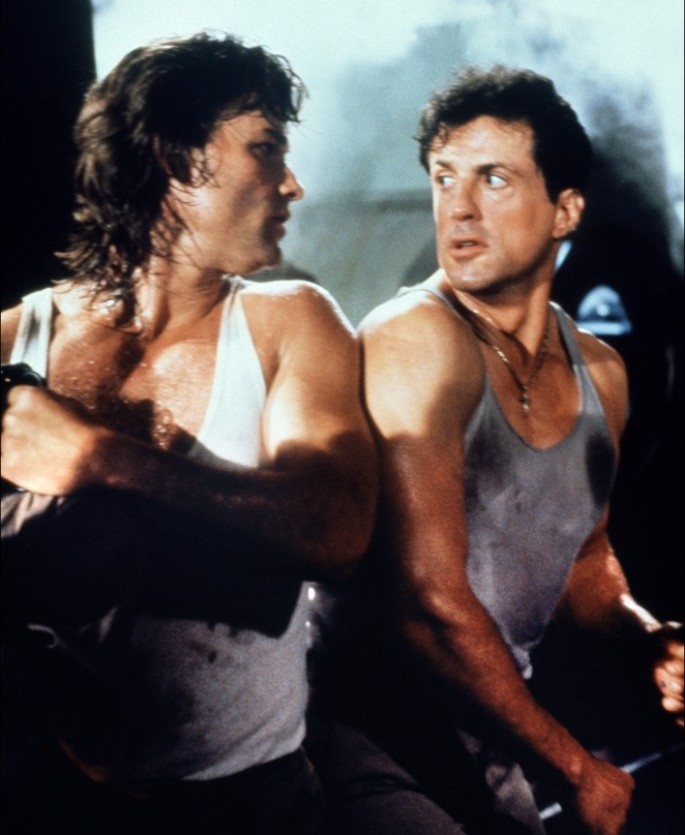 Perhaps it is. But does that mean there’s no truth in it?

I think what this comes down to is the difference between text and subtext. Some viewers prefer to only look at the text of the film – If the characters aren’t kissing or having intercourse, then we shouldn’t read anything sexual into it. Whereas other viewers see a roiling subtext of sexual tension and subversive homoerotic imagery – sometimes intentional, sometimes not. (It’s totally intentional in ‘Top Gun’.)

So, what do you think? Are film critics who call out the homoeroticism of action movies just full of it? Or do some viewers deny the obvious due to their own insecurities? Is male bonding on film inherently homoerotic, or not even remotely? Are you offended that someone would even make the suggestion? Are you offended that other people would be offended by the question?

Remember, play nice now. If things look to get out of hand, I’ll be keeping a tight reign on the comments section.