Is the big budget, high profile, Ridley and Tony Scott-produced remake of the “classic” ’80s television series a whopping success or a big old bomb? Read on to find out!

Nostalgic love is not required, but it helps.

In the new ‘A-Team’ movie, based on the iconic but not-particularly-good television series that ran on NBC from 1983 to 1987, we’re treated to a brief prologue that sets up the brotherly bond between four military men turned renegade heroes. The fact that this small section of the movie is meant to build both characters and relationships says something. While all these important building blocks are being set in place, the movie’s pace doesn’t slow down for a minute. Literally before the main credits roll (and before the A-Team, as a team, is fully developed), we’re already treated to zooming helicopter chases, a fighter jet, many men with guns, killer dogs, a man getting set on fire, and another man who is so insane that he impersonates a doctor and then gives a member of the team stitches in the form of a ‘Harry Potter’-esque lightning bolt. That’s the closest thing the movie gets to character development.

‘The A-Team,’ directed (relentlessly) by Joe Carnahan, is a big, dumb, explosive action movie that barely pauses to catch its breath or check its audience’s pulse. There is very little in the way of, say, narrative coherence. And its politics (especially its attitude towards women) are thorny and problematic. But it’s not entirely terrible. In fact, in its own loopy, cartoonish way, it’s a whole lot of fun. Until almost all that goodwill is squandered in a numbing third act that is the movie’s most chaotic section and also its dumbest.

For those of you that never tuned in originally, the A-Team consists of four macho Special Forces dudes who get framed for a crime they didn’t commit. (In the movie, it’s something about stolen plates that can be used to print perfect counterfeit money.) So, they strike out against the bad guys in an effort to get their good name back. Col. John “Hannibal” Smith is the leader of the group – a gray-haired, cool customer who’s always chomping on a cigar and “loves it when a plan comes together.” The role is benefited greatly by the regal screen presence of unlikely action star Liam Neeson. He commands the movie even when he’s doing little more than snarling. Bradley Cooper, usually a vortex of personality, is actually pretty watchable as Lt. Templeton “Faceman” Peck (or simply “Face”). He’s distinguished as the fast-talking ladies man in the group, probably in an effort to cut down on the overt homoeroticism that hangs in the air like an Iraqi oil fire. (It doesn’t really work.) In the iconic role of Sgt. B.A. Baracus, originated by the fool-pitying Mr. T, we get UFC fighter Quinton “Rampage” Jackson. He’s given the movie’s meatiest character arc. B.A. wants to embrace pacifism even though his job is largely dependent on breaking necks. But the “actor” Jackson can’t rise above mumbling his lines, which makes any emotional connection difficult. I wanted to stand up and yell at the screen, “WHAT? COULD YOU SAY THAT AGAIN?” Then there’s H.M. Murdock, who in the original series was given the nickname “Howling Mad.” That’s not referred to in the movie, probably because the filmmakers thought it would be insensitive (to crazy people or werewolves, we’ll never know). He’s played by ‘District 9‘ breakout star Sharlto Copley, who promptly steals every scene he’s in.

As for the film’s heavies, we get Jessica Biel as an army captain with a fondness for leather dusters. She wants to bring our heroes down, and previously had a relationship with Face. (Again: she’s his beard). Brian Bloom, also one of the film’s four credited screenwriters, is a nefarious member of a Blackwater-esque private military troop. Patrick Wilson is a shady CIA type, essentially the Jason Patric role from ‘The Losers,’ except without that performance’s sense of goofy fun.

Really, those brief descriptions are all we get for motivation, backstory, or character development. The filmmakers seem to be coasting on the goodwill that the original series provided. Never before has a film leaned so heavily on nostalgic half-remembrances to serve as a narrative shortcut.

But you know what? It works. Mostly. 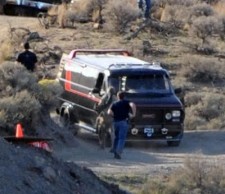 There’s no real sense of danger or threat to any of the action sequences. They’ve been heavily processed by a bunch of computer animators to the point that they resemble high-polish videogames. Also, our heroes are so cool and so indestructible that we as an audience never once worry about their safety. We just watch, as the special effects and pyrotechnics pile up, and the laws of physics (and finances – how do they pay for all this stuff?) get thrown out the window. But Carnahan, in his staging and execution of these sequences – which are only connected by the loosest of plot threads (double crosses, blah blah blah) – works up to a kind of zippy action movie rhythm. The movie may be less ‘Die Hard‘ and more ‘Looney Tunes,’ but these set pieces are staged and shot with a certain amount of bravado swagger. It’s like we’re watching through the A-Team’s eyes, from their winking, uproarious viewpoint.

By the time the movie reaches its exhausting third act, that rhythm has been disrupted. It suddenly becomes too much. The audience drowns, awash in a sea of computer-generated explosions and violent double crosses. Gone is much of the gonzo wit that made the rest of the movie so tolerable, replaced by bludgeoning, repetitious action movie noise. This section is decidedly laugh-free, particularly when the movie reaches its “conclusion.” I put that word in quotes because it becomes more and more obvious that this ‘A-Team,’ no matter how loud and fun it might be, is just the first in a potential franchise. It’s like a pilot to a television series we’re not all that excited about watching further.

What a shame, too, particularly with Joe Carnahan behind the camera. His 2002 feature ‘Narc’ was a hard-hitting film noir produced on a shoestring budget. Carnahan felt like the next great genre filmmaker. Watching ‘Narc’ was like watching ‘Memento‘ for the first time. You felt that you were in the hands of a filmmaker who was going to do a lot of amazing stuff. But then the years went on, with only one forgettable action movie (‘Smokin’ Aces‘) and many burned bridges. (He was set to direct Tom Cruise in ‘Mission: Impossible III‘ and Reese Witherspoon in a remake of ‘Bunny Lake is Missing,’ both of which dematerialized). And now he’s stuck directing ‘The A-Team,’ a movie that bares little resemblance to the film that made such an impact almost a decade ago.

This is saying nothing of the movie’s uneasy politics. It simultaneously bemoans private military groups like Blackwater while championing our heroes, who are their own ass-kicking military group. And the movie’s attitude towards women? Please. They are sex objects and little more. Even Biel’s character, a powerful military woman, can’t escape the misogynistic belittlement. It’d be a hell of a lot more infuriating, though, if the movie weren’t so hopelessly homoeroticized.

If you want a dumb, fun action movie that’s a little too long (over 2 hours) but hits many of the right spots, you could do a lot worse than ‘A-Team.’ I never checked my watch like I did during ‘Prince of Persia.’ The action sequences have a zippy flair. If you’re expecting more, then you’ll be disappointed. It will certainly help if you have a reverence for the old show. As one of the characters says in the movie, “Overkill is underrated.” You kind of have to wonder if this wasn’t the movie’s motto, printed on T-shirts and worn by the cast and crew. Because they took it to heart. Big time.