By now it’s clear: I thought ‘Piranha 3D‘ was pretty great. And I’m pretty sure it’s not the heat stroke talking. I saw the movie twice this weekend, and both times the theater (the largest one at my local bijou) was at least half-empty, if not more. I tried to figure out why exactly this movie, which should be delighting audiences from coast to coast, didn’t connect with audiences. It barely made any money at the box office, and I heard some scuttlebutt last night that it might not have even made enough to stick that #5 placing. So, in the interest of scientific exploration and aimless speculation, I present to you five reasons why people aren’t jumping in for ‘Piranha 3D.’ To quote ‘Lost’ co-creator Damon Lindelof’s recent Tweet: “Am I seeing Piranha 3D tonight? Yes. Will I need to see it again immediately afterwards to determine whether it was a dream? Again, yes.”

Take this into consideration: This is the first Weinstein Company movie released in 2010, and it’s the end of August. That probably doesn’t mean there’s a whole lot of money for promotional materials or marketing campaigns. Also take into consideration that there is one lone trailer, which premiered with ‘Avatar’ back in December of last year, on the Apple trailer page. (There was a second trailer released, which we now know shows the final scene of the movie, but apparently that never made its way online.)

Watching this trailer, besides seeing bits and pieces of scenes and sequences that didn’t make the final cut, is telling in the way that it’s cut together and the “narrative” of the trailer is formed. Everything is played with a complete straight face. There is not even a wicked shrug at the movie’s wacky sense of humor and its liberal mixture of thrills and laughs. (More on that with #3 on this list). The television commercials that ran in the weeks before the movie’s release, sparingly, followed the same formula. I can imagine teenage boys – clearly their target audience no matter the direction of the ad campaign – thinking they were going to see some bleak, serious horror movie (something along the lines of the humorless ‘Saw’ pictures), only to get this gonzo bit of Grand Guignol. If the Weinstein Company really knew what it had on its hands, the studio would have made more of an effort to push the midnight movie fun of ‘Piranha 3D.’ Instead, the movie was married to a campaign that made it seem as solemn and scare-less as a direct-to-SyFy cheapie.

I talked to Roger Corman this week. While he hasn’t seen the new ‘Piranha,’ he was shocked by how small the print ads for the movie were. Yes, seriously.

Imagine that the thick-skulled marketing campaign actually got through to someone. Then imagine that viewer saying, upon reaching the end of the trailer or television spot, “Awwww, it’s in 3-D? Forget it!” Because, really, that seems to be the sentiment. People are already sick and tired of 3-D, as the recent receipts for ‘Step Up 3D’ showed us. (It was the least successful in the franchise and yet benefited from the costly 3-D surcharge affixed to each ticket.) Also: ‘The Last Airbender,’ ‘Cats & Dogs: The Revenge of Kitty Galore,’ and ‘Despicable Me’ didn’t exactly change the cultural landscape (although ‘Me’ did make a fair chunk of change). You can only go to the well so many times before people become jaded.

‘Piranha 3D’ may have been a film converted to 3-D, but that’s only because reflections caused major problems with the 3-D cameras when filming on the water. The film was conceived in 3-D and the filmmakers worked for the better part of a year on the conversion, which was done using Real-D’s very own Immersion technique. Again, this is something that the Weinstein Company should have let people know. The studio could have sent out pamphlets saying, simply, “This isn’t ‘Clash of the Titans.’ We promise.”

To tell you the truth, this may be my favorite use of 3-D since ‘Avatar.’ The filmmakers picked out moments to completely immerse the audience. In other sequences, they gave the movie an almost pop-up book quality, with multiple distinguishable layers. The latter helps the movie achieve a goofy homage to the horror pictures of the ’50s and ’80s. The bottom line is that a movie being in 3-D isn’t enough to get anybody to show up anymore. You’ve got to let them know that they’re getting a little more for their 3-D, like boobs and blood and body parts exploding out at you. This is what we call a “selling point.”

3.) Comedy and Horror Are Strange Bedfellows

Hollywood is littered with the corpses of failed horror comedies. ‘Army of Darkness,’ ‘Jennifer’s Body,’ ‘Night of the Creeps,’ ‘The Frighteners,’ ‘Re-Animator’… These movies are considered “cult films” because nobody fucking saw them in the theaters! If there’s one thing that studios (and, to a more indistinguishable degree, audiences) like, it’s clarity in tone and intent.

Something that fluctuates, with such gusto, between the horror and comedy lines must put people over the edge. I tried to gauge the audience reaction the second time I saw ‘Piranha 3D,’ to tell when people were “feeling” or “not feeling” the liberal mixture of laughs and carnage. For a while, it just seemed like they weren’t getting it. Maybe that’s because both are at such polar extremes in the movie. (More on that with #4.) Towards the very end, when Jerry O’Connell – playing a Joe Francis-type slimeball – lets out his dying words (“Wet T-shirt, wet T-shirt”), the audience finally seemed to get completely on board. Of course, there were only about twenty minutes left in the movie after that, but still. It’s telling that it took that long for the audience to get behind the tonal balancing act that the movie set out to achieve, because ‘Piranha 3D’ is so funny and so scary.

In my estimation, the more shocking gore stuff and humor never negates moments of genuine, old school suspense. I jumped out of my seat a couple of times. besides, don’t you always laugh on a rollercoaster?

The MPAA was feeling very charitable when it awarded ‘Piranha 3D’ an R-rating. There are moments of such extreme violence that people I saw it with the second time refused to look. In particular, there’s a moment that is so wonderfully heinous that I’d feel bad ruining it here. Instead, I’ll let Mike Ryan from Vanity Fair ruin it for you. See his answer to the question: “What’s the Goriest Death in Piranha 3-D?” Yep. That’s the one. 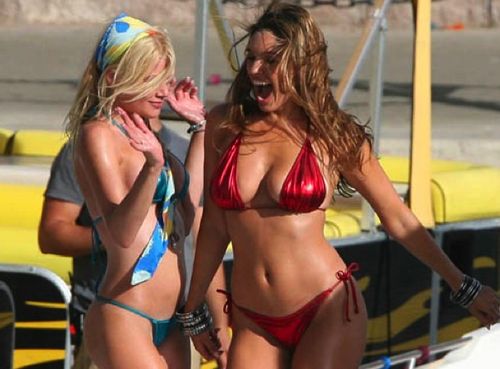 Director Alexandre Aja has never shied away from gore in movies like his breakthrough ‘High Tension’ or his politically inclined remake of ‘The Hills Have Eyes.’ In his last movie, 2007’s ‘Mirrors,’ Aja found a way to have the adorable Amy Ryan kill herself by ripping off her own jaw. Yet even that death seems tame compared to the extreme violence on display in ‘Piranha 3D.’ And what’s more, it’s coupled with such open sexuality – well, not really sexuality, but nudity. Still, when was the last time you saw a naked person in a mainstream Hollywood movie? Much less tons of naked people. Much less two women, fully nude (and fully shaved – another taboo broken here), swimming naked underwater in 3-D. Aja and company knew good and well where “the top” was and sailed way over it.

Maybe all of this would have been more palatable if Aja had excused his French inclination to comment on the situation, but it becomes very clear that much of ‘Piranha 3D’ is an indictment of American hedonistic culture. An oppressed, puritanical society has to unleash itself in volcanically self destructive ways, and then those same oppressed Americans get gobbled up by the boat-full. There are definitely some environmental undertones as well. Everyone “treats the lake like a garbage can,” according to our heroine Elisabeth Shue. The entire plot of the movie is set off by a beer bottle dropped in a lake. If the movie had just reveled in the hedonistic, simplistic pleasures of the Spring break party-goers, then it probably would have been a lot more acceptable to audiences. Instead, Aja couples these outré set pieces with thought-provoking commentary. That might be “too much.”

The Weinstein Company made a catastrophic miscalculation when it failed to screen the movie for critics in anticipation of release. (I got a terse email from a Wesintein Company representative that all but scared me away.) Instead of building some potential good buzz – because there would have been some critics (like yours truly) who would have responded positively – the studio created a distance from its potential audience and the film. Young people today are totally hip to critical consensus sites like Rotten Tomatoes and Metacritic. While the value of a collective thumbs up or thumbs down is another conversation altogether, this is how many young moviegoers decide whether or not to see a movie. Without that barometer, people are left to assume that ‘Piranha 3D’ is horrible, which it isn’t.

Various blogs and publications sent reporters, many of them second-stringers, out to the midnight screenings on Thursday night or early screenings on Friday. The early word was enthusiastic. The ‘Associated Press’ review opened with these great lines: “Mere Words cannot descibe how awesomely gnarly Piranha 3D is, how hugely entertaining, and how urgently you must get yourself to the theater to see it. Like, now.”

Additionally, star Adam Scott took to Twitter saying that he’d personally act out his scenes if you didn’t enjoy ‘Piranha 3D.’ He clarified for Vanity Fair: “I really don’t think it will be necessary, since I can’t imagine one not being satisfied with Piranha 3-D, but just in case, yes of course I will be there. Few things: Will need the aforementioned firearm and fish. Will also need local Elisabeth Shue look-alike to run dialogue with, a plaid shirt, two high-fives (one before we run the scenes, one after), peanut M&M’s, a map with the closest Red Roof Inn circled on it (I won’t be staying there, I just like knowing where it is. I’ll be staying with you), a 700-word essay on why you neglected to recognize that Piranha 3-D totally fucking shreds, Perrier, a quick guitar lesson, one grenade, dinner with your family, and directions to the airport.”

Basically, if you were in the right frame of mind, you’d see ‘Piranha 3D’ for what it is – a truly daring, totally wonderful horror romp. If it’s your first review back after a week off, though, you might be a little grumpier.