In an earlier ‘Mad Men’-related post, I talked about how interesting it was that Roger’s office looks so modern. Its curved, space-age surfaces recall (purposefully, I’d imagine) the TWA Flight Center at JFK. That modernity conflicts with the classic, musty style of Don’s bachelor pad. This is symbolic, of course, of Don grabbing onto the past while time, furiously, races forward. But it’s Roger who, in this week’s intense, sometimes intensely goofy episode ‘The Chrysanthemum and the Sword,’ refuses to let go of the past, even in the face of dire financial straits. Roger’s refusal to do business with Honda because he fought against the Japanese in World War II’s Pacific theater is a little on-the-nose, metaphorically speaking, but it offers just enough sly dramatic tension to form the core of an episode that’s full of zingy tangents.

Maybe the greatest thing in the episode (besides the fact that it addresses female masturbation, one of the more taboo subjects in all of television, nee, popular culture – more on that in a minute) is the fact that it recaptures the peppy, ‘Ocean’s Eleven‘ feeling of last season’s breathless finale. Don, convinced that they’ll lose the Honda account because of Roger’s shocking insensitivity (via poison-barbed puns!), puts on a massive, highly convoluted, often hilarious scheme that involves many facets of Sterling Draper Cooper Price (including Peggy, who drives a Honda motorbike around an empty soundstage). The object of the deception is to show that their agency is the more honorable of the two bidding for the account. The other is being run by Don’s new nemesis. (He equates him to a fly.) Throughout this subplot, we see the tensions that are bubbling to the surface in regard to Roger. His unwillingness to let go of the past is one thing. But as Pete points out, he’s also desperately clinging to his lone account, and seems to be teetering on the edge of instability. Of all the ‘Mad Men’ characters who drink like fishes, his drinking is the only one with a twinge of dread.

Japanese culture leads to other drama elsewhere in the episode. As Don is out charming a date (that priggish girl from earlier this season, who still had the guts to stand up for herself against his womanizing) and doing cultural reconnaissance at a hibachi restaurant, little Sally Draper has fun with some scissors at home. Don comes home, furious (of course) at his daughter’s transgression, and at the adorable babysitter from down the hall who let it happen. His anger seems misdirected and harsh, even by Don Draper’s standards. When he pays the young nurse, he says it’s “severance.” Ouch. (I expect a reconciliation between the two sometime in the next few episodes. She’s just too cute.) Of course, even harsher is Betty’s reaction to Sally’s lopped-off locks: She smacks the poor girl right across the face. “Was that really necessary?” Don asks. Betty answers with more screaming. 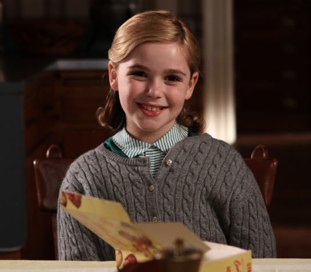 If that isn’t enough for poor Sally Draper, who’s showing herself to be one of the more complicated characters on the entire show (go figure), the girl gets into even more hot water at home. At a sleepover, when everyone else is asleep, an episode of ‘The Man from U.N.C.L.E.’ inspires Sally to touch herself in a sexual manner. Sally is only 10-years-old, the episode makes clear. But this isn’t some freak occurrence. It’s a normal part of healthy human sexual development. Of course, in the ’60s, this was something to fear and hush up (even more so than today). Not only is Betty appalled and frightened, this leads her to take Sally to a child psychologist. What impressed me most about the female masturbation subplot is the frankness and sensitivity with which it’s dealt, both in its depiction (the sequence itself is suggestive but still surprisingly intense) and in the aftermath that follows.

This week’s episode was both written and directed by women. Even more than ever, it suggests that, while it might be a man’s world now, everything changes.