M. Night Shyamalan’s ‘The Last Airbender,’ adapted from the sixty-odd episode Nickelodeon animated show, begins with a title card that reads “Book One: Water.” What it should really say is, “This is the First in a Potential Franchise, So Even If You’re Not Too Keen On This One, You’ll Probably Come Back for the Second or Third Go-Round, Because Our Marketing Will Be Quite Persuasive and Everything Has Sequels These Days and It’s Not Like Movie Tickets Are That Expensive.” You’ve got to give the filmmakers some credit – at least they’re very upfront about their nakedly commercial ambitions. ‘The Last Airbender’ ain’t art, nor will it ever be mistaken for such. But I’m not sure anyone was asking for art, especially if they’ve seen the trailers (which feature some mystical variation of kung fu); what they want is to be entertained. Unfortunately, ‘The Last Airbender’ fails on that front too.

If you’re like me and have only a cursory understanding of the animated television show, the movie clears things up through long, chunky sections of expositional dialogue and equally tacky voiceover narration. In the simplest terms, the movie takes place in a fantasy world where the planet is divided into geographic realms devoted to elemental substances. There are nations solely given to Earth, Air, Fire, and Water. People within these nations have the uncanny ability to control said elements. For instance, one of our main characters, Katara (Nicola Peltz), can manipulate water, turning it into the fountains at the Bellagio or stringing it together in pearlish hovering beads. Katara and her brother Sokka (Jackson Rathbone) unwittingly stumble across Aang (Noah Ringer), a prophesied “Avatar,” someone who can manipulate all four elements and who will unite the elemental nations in (presumably) peace. Or, barring peace, a kick ass dance party.

Of course, nasty members of the Fire nation would not like said dance party/peaceful unification to take place. Chief among them is Lord Ozai (Cliff Curtis) and his impetuous son Prince Zuko (Dev Patel). I’m a little vague as to why they want to capture this special little kid, but they do. Badly. Which leads to all sorts of behind-the-iron-curtain hand-wringing that just feels out of place and dodgy. One of the ways in which the movie ultimately fails is its complete lack of rhythm or pacing. Not only is it weighed down by these scenes of the bad guys contemplating doom, virtually every character has a Time Out to find his or her chi. A recurring plot point in the movie has Aang zoning out so that he can commune with the spirit of a wizened dragon. Writing this stuff down makes it seem really silly, but these are actual plot points that the film treats with the utmost earnestness. 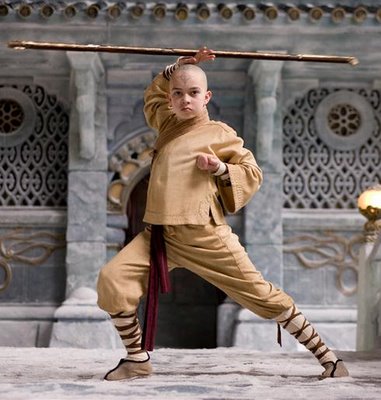 Which belies another problem: Shyamalan has lost his sense of humor. Even a movie like ‘Signs,’ which is about a man reclaiming his faith in the face of an alien invasion (heady stuff for sure), was also wickedly funny. Here, even the most absurd notions or images, like warriors riding on the backs of giant Komodo dragons, are upheld with a straight face. You want to shake him and say, “Loosen up! Your last movie was about killer houseplants!” There are plenty of opportunities for lighthearted humor, but everything is taken so damn seriously that there isn’t room for anything except matters of the gravest import. This is another reason why J.J. Abrams has taken the mantel of “The Next Spielberg” from Shyamalan’s grip: because he can provide wondrous entertainments that are also quite funny.

Now, I’m making ‘The Last Airbender’ seem really terrible. That’s because it is. I haven’t even gone into the blank slate, mostly non-professional child actors who are uniformly horrible. And I haven’t mentioned the flying, six-legged otter. Or its lame-ass cliffhanger ending that makes the twist from ‘The Village’ seem like a work of fucking genius.

There are some nice things to say about ‘The Last Airbender,’ but they’re few and far between and mostly superficial. For one, Shyamalan does this cool thing during the more intense action sequences where he’ll both slow down and zoom in on a specific piece of the action. This lets us see it better before he zooms out and resums the normal speed. It’s sort of the next level of the “speed ramping” trick that Zack Snyder has mastered. It’s also a nice, 21st century tip of the hat to the extreme zooms of old karate movies (to which this film owes a considerable debt). Similarly, the movie is very handsome looking. Costumes, sets, and atmospheric visual effects are all top notch. But it doesn’t make a bit of difference when you’re this emotionally detached from anything that’s happening on screen. It’s the antithesis of ‘Toy Story 3.’ It’s a movie that makes you feel nothing, over and over and over again.

PS – I didn’t see this thing in 3-D. If I had, I probably would have driven my car into a tree on the way back from the screening. Now that‘d be comin’ atcha!