I’m not sure I saw this coming. ‘Piranha 3D’ – which has been rescheduled for release several times, handed over creatively at least once (Chuck Russell, director of ‘The Mask‘ and ‘Nightmare on Elm Street 3: Dream Warriors,’ was attached to direct initially), and not even screened for critics in advance of its release – is probably the most surefire, start-to-finish entertaining movie of the entire summer season. That’s not just because it delivers on the late night cable thrills that movies like ‘Snakes on a Plane‘ or ‘The Expendables‘ promised (and failed to do). This movie is smart and has a wicked sense of humor. Also, it’s sexy. When was the last time any Hollywood horror movie was smart, funny, scary, and sexy? Yeah, I can’t remember either.

The set-up is pure genre cheese: A pack of prehistoric piranhas is unleashed after an underwater earthquake triggered by a falling beer bottle. It just so happens that these piranhas were awoken in Lake Victoria, which annually brings together thousands of horny co-eds for wild Spring Break festivities. Elisabeth Shue plays the town’s tough-ass sheriff. Ving Rhames is her deputy. Steven R. McQueen is her son. And Jerry O’Connell plays a Joe Francis-type pornographer. (He shoots movies called ‘Wild Wild Girls.’) Rounding out the cast of fish food (“chum,” should we say?) are Adam Scott (pitch-perfect) as a seismologist, Paul Sheer from ‘Best Week Ever’ as a cameraman, and – in a role that brings the house down – Christopher Lloyd as a Doc Brown-ish fish expert. Current ‘Playboy’ cover girl Kelly Brook and adult film actress Riley Steele spend much of the movie’s first act in a naked underwater lesbian ballet set to the tune of “The Flower Duet” from the opera ‘Lakme.’ Yes, this is what kind of movie ‘Piranha 3D’ is.

Once the piranhas make their way to all of the nubile spring breakers piled atop barges and boats, things go decidedly kerflooey. The movie opens with long stretches of unchained sexuality. There’s O’Connell’s character on a boat with some impressionable youths (McQueen and his on-again/off-again love played by Jessica Szohr), and the aforementioned naked cavorting mermaids, plus all the madness being done by the large gaggle of spring breakers. (Eli Roth shows up as a wet T-shirt contest impresario.) These sequences are shot lovingly. Director Alexandre Aja’s camera creeps along all the toned flesh, bared breasts and pierced bellybuttons. He seems to be reveling in the absolute madness of the American spring break. As a French director who previously helmed ‘High Tension’ and the politically charged remake of ‘The Hills Have Eyes,’ this is all razor-sharp cultural commentary: an oppressive, puritanical society only lets itself go on occasion; when it does – stand back – because it’s going to get wild. 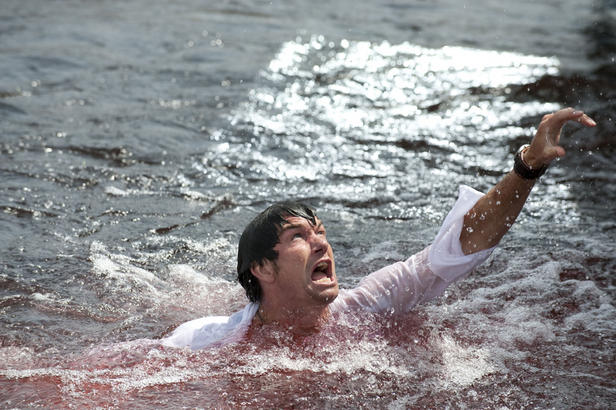 Then the piranhas attack, and all of that guiltless partying goes quite wrong. I’m not sure if it’s the most violent movie I’ve ever seen, but this is the first I’ve been genuinely taken aback by the sheer abundance of on-screen brutality in quite some time. The MPAA was feeling very lax when they awarded (and that really is the right word to use: awarded) this movie with an R rating. Giving away any of the gory gags would ruin some of the movie’s fun, but it really is fun. Aja knows how to perfectly calibrate the scares-to-laughs ratio in a way that the best horror comedies do. (You’ll definitely get a ‘Tremors‘ or ‘Gremlins‘ vibe.) The shocks just keep on coming.

‘Piranha 3D’ is such a home run not just because of its over-the-top violence. The movie is tempered with elegantly staged suspense set-pieces. Everything – from the underwater nudie ballet to the buckets of blood thrown at the camera to the way that the movie replicates the zoomy, THREEE-DEEEE-ness of exploitation flicks of the ’50s and ’80s – is done with a knowing (but never annoyingly wink-wink) wit. In its sleek 87 minutes, there are more scares, laughs, and genuine surprises packed into ‘Piranha 3D’ than in almost any other movie released this summer. It may not have the puzzlebox invention of ‘Inception‘ or the heart-tugging sentimentality of ‘Toy Story 3‘ and ‘The Kids Are All Right,’ but I haven’t enjoyed myself – hands in the air, laughing every few minutes from the sheer outrageousness of it all – in a very, very long time.