Two major releases vie for gamers’ post-‘Diablo’ dollars this week, and yet several other titles would also kindly ask you to purchase them as well.

I played the demo for this, and coupling that experience with Capcom’s attempts thus far to make Western-style games, ‘Dragon’s Dogma‘ looks to be a spectacular failure. Fortunately, the game does enough interesting, if unfinished, things to make me really want to play it. This third-person action RPG has a pawn system, wherein the player often changes members of the party based on current missions. These party members (pawns) are recruited from areas all over the game. If you need to kill Griffins, finding the pawn who has spent his whole existence killing griffins would be a sound strategy.

In an aside, a female employee working on the project has accused Capcom of allowing her superiors to intimidate her and marginalize her work to the point where she attempted suicide. The controversy has sparked a vocal set of players to boycott the game, which strikes me as a completely misguided decision. ‘Dragon’s Dogma’ is a AAA project involving the labor of hundreds of people over several years. Boycotting the game will encourage Capcom to not make a sequel and probably lay off a lot of people, not to improve working conditions or increase sensitivity to any abuse of power.

If you’ve found the ‘Pirates of the Caribbean’ movies to present an interesting and fun world that you’d be willing to play a clunky RPG in order to experience more of, then you’re in luck with ‘Risen 2: Dark Waters’. This game’s release has been pushed back a few times, so don’t be too surprised if it slips again at the last minute. [Ed.: Amazon currently lists it for release on July 31st. -JZ]

In essence a budget sequel, this mystery/horror/adventure game should interest anyone who liked ‘Alan Wake’. It has been out on the Xbox Live Arcade for awhile now, and its reception has been good. I feel that making this a budget digital title was smart choice, which makes it easier to get it as an impulse buy.

THQ has had one of the worst years possible for a game publisher. In order to survive, THQ decided to focus on its hardcore audience. Clearly, ‘PurrPals Purrfection‘ for the 3DS is a throwback to the less dire days of THQ. 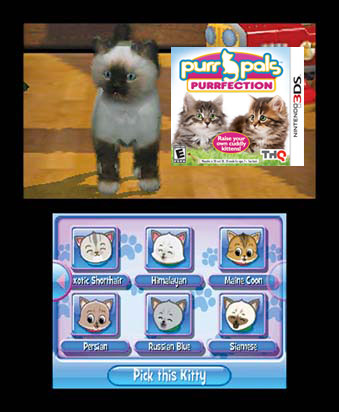 I like tennis just enough to enjoy playing tennis games. The ‘Topspin’ series has failed me repeatedly, but I still have fond memories of ‘Mario Tennis’ on the Virtual Boy. I just wish that the 3DS version had a Virtual Boy mode where everything was in red.