I don’t know if you’ve heard, but the follow-up to the biggest PlayStation 3 exclusive of all time comes out in a few weeks. Yes, ‘Uncharted 3’. Woo-HOO! To celebrate… er, market this big release, last week Sony and Naughty Dog revamped PlayStation Home to be an ‘Uncharted’ bazaar. I took a trip down that sandy staircase just for you…

While I’m not a big fan of PlayStation Home, I still think that the “Total Game Integration” idea is a great marketing tactic. For those who love PlayStation Home, it must be a nice change of pace. For those who are just curious or want a little teaser of a new game (beyond the betas and demos), it seems like a fun, albeit tiny, tide-me-over until the game is released. In addition, the “integration” feels like it’s highlighting perhaps some changes or advances, or maybe even a strong focus in the upcoming game. ‘Uncharted 3’ can’t come out fast enough!

The name of the game is the same as the recent ‘Dead Island’ integration, where the Central Plaza is made over to be reminiscent of the game that’s being integrated. This time, the Plaza is a sandy map that looks like a scene out of the soon-to-be-released game. It isn’t as expansive as the ‘Dead Island” integration, but that’s not really a bad thing. ‘Dead Island’ had several locations where you could look at stuff or engage in one of the little mini-games. ‘Uncharted’ has only one game, but it’s fairly tight. Regardless, as you explore the revamped plaza, there isn’t much to see other then the new locale, the mini-game or “Pre-order the game now!” location(s). 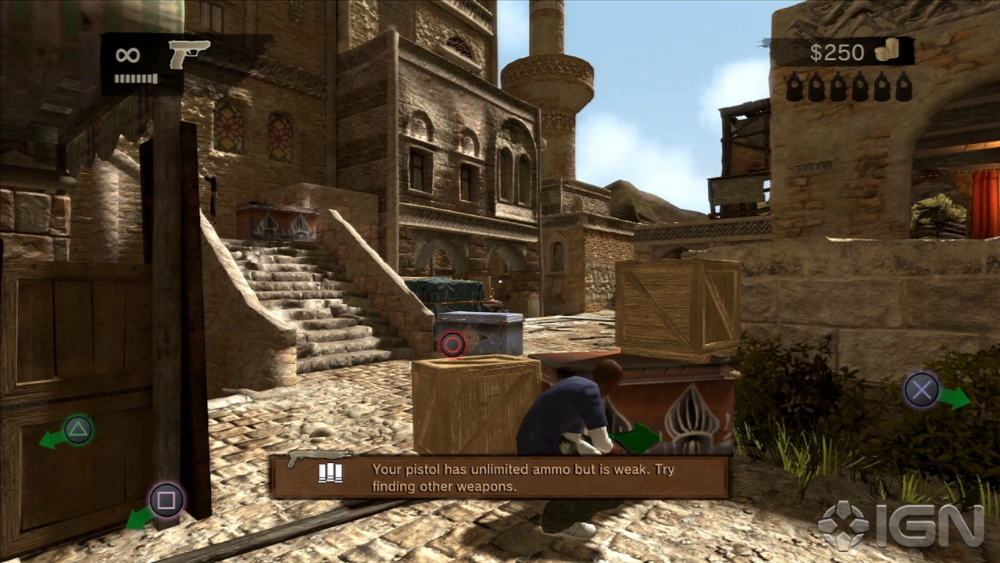 The mini-game itself is called “Fortune Hunter.” It’s a cover-based experience where you, pretty much solely, move from one place of cover to the next by using the symbol buttons. There’s the occasional “Dodge some shit that’s going to fall on you” quick button press, but otherwise you move from cover to cover picking up weapons, bullets, grenades and “fortunes” (golden trophies). You need to pick up a certain number of “fortunes” by a certain amount of time to beat the “wave.” There are three waves to finish in order to put you well on your way to completing all of the challenges. If you finish all of the challenges, you unlock the “Kickback Endurance Booster” to be used in the actual game. The challenges are much more realistic in this integration than the ‘Dead Island’ one. And by “realistic,” I mean “more achievable.” There are lots of baddies and shooting and grenade throwing, and occasional tasks you need to figure out in each wave, but I found it mildly repetitive. That’s not to say it wasn’t fun, but, like ‘Dead Island’, it’s only an ever-so-minute look into the game you’re waiting for.

So, will ‘Uncharted 3’ feature a lot more cover-based gameplay? Will there be golden trophies to seek out? Will you run around a map that looks like the Central Plaza? Only time will tell. I’m pretty darn psyched for the November 1st release. How about you?

In the meanwhile, here’s a little trailer for the integration: