Normally, I use these “Unboxed” posts to examine some of the exotic import video discs in my collection. For today, I thought that it might be worthwhile to shine the spotlight on a few recent limited-edition retailer exclusives that I’ve picked up for one particular movie: ‘The Muppets’. At least one of these is still available for purchase right now.

You know, the strange thing about my mini collection for ‘The Muppets‘ is that, when I saw it in the theater last year, I liked the movie, but I wasn’t really as enthusiastic for it as Aaron here (who gave it five stars in his Blu-ray review) or even my own wife. The film seemed too unbalanced toward being nostalgic than toward being funny, and I would have preferred to see the opposite. Nonetheless, I enjoyed it, and somehow or other I wound up buying no less than three special Blu-ray packages for it.

First came the SteelBook case, which was an exclusive pre-order promotional item at Best Buy. (Technically, this particular metal case isn’t SteelBook brand, but right or wrong, that’s an easy shorthand that collectors like myself often lapse into – sort of like calling all tissues “Kleenex.”) The way the promotion worked was that shoppers could walk into a Best Buy store a week in advance of the Blu-ray’s release date and pick up the empty metal case by itself. By plunking down $7.50 to pre-order the Blu-ray, you could walk out of the store with the case early. Then, when the Blu-ray was officially released, you’d return to the store with the receipt and buy a copy (in its normal packaging). The store would deduct that $7.50 already paid from the price. Once you got home, you could swap the discs from the plastic keepcase into the metal case.

(In Canada, Future Shop stores carried this same case as an exclusive there.)

I like the artwork on this a lot better than the standard keepcase packaging, especially the interior. Click on any of the below photos to enlarge: 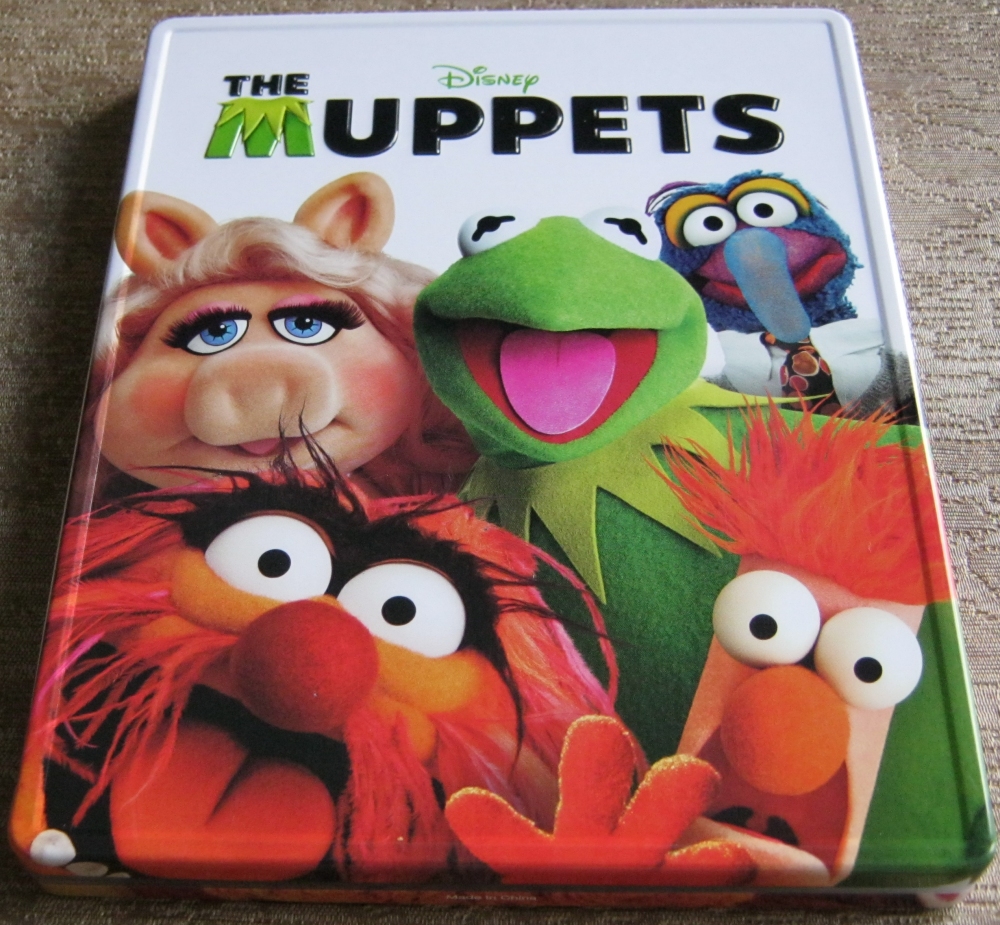 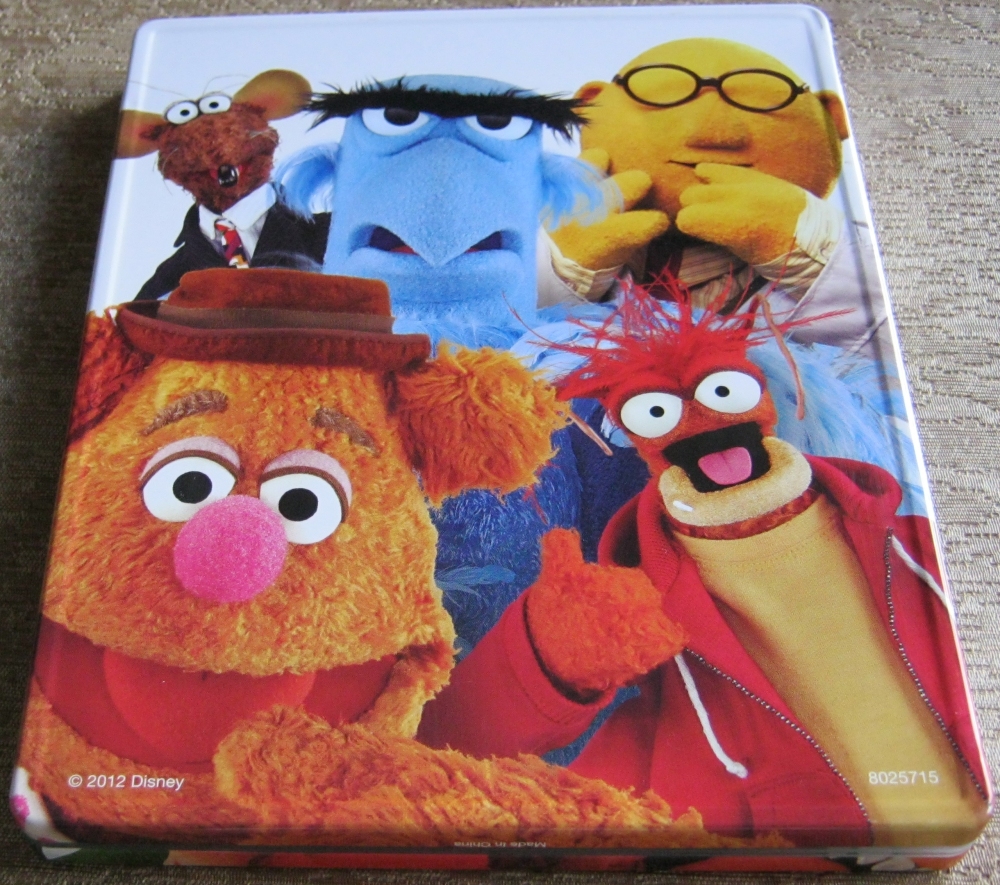 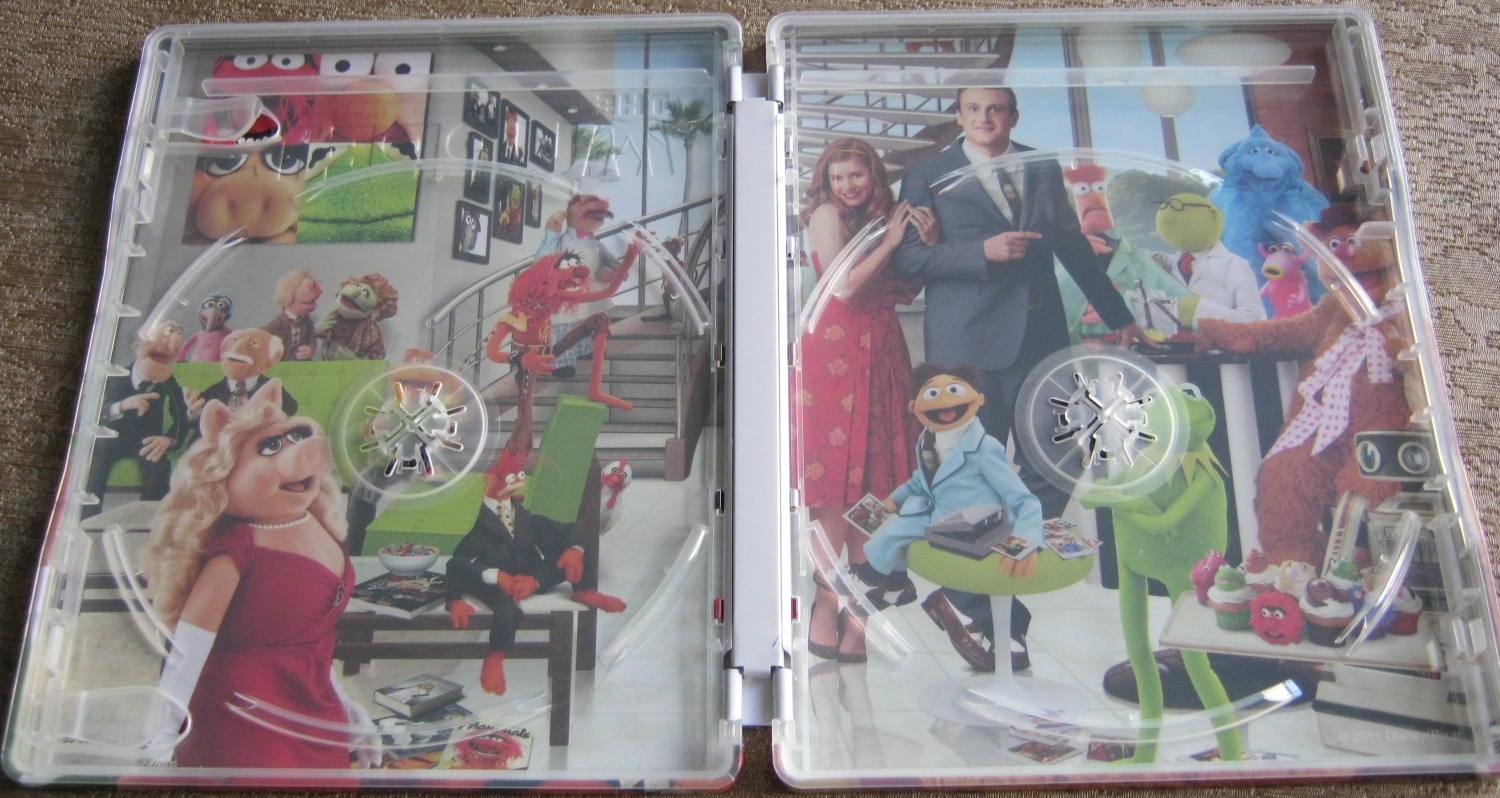 Supplies of this case dried up in Best Buy stores pretty much as soon as the pre-order period ended. Second-hand copies are still available on eBay, of course.

One wrinkle in this process is that, after pre-ordering the Blu-ray and obtaining the case, there was nothing that Best Buy could do to force anyone to follow through with the rest of the order. If you felt that the case alone was worth the $7.50, you could just as easily buy the Blu-ray elsewhere. That’s exactly what I did in order to get another retailer exclusive, the Walmart “Finger Puppet” gift set.

This was basically just the standard retail Blu-ray plus a set of four Muppets finger puppets bundled together in a flimsy cardboard box. Unfortunately, Walmart shipped this item to me in a padded envelope, which meant that the box was totally crushed by the time I received it. I’ll have to rely on one of the retailer’s publicity images to show you that. 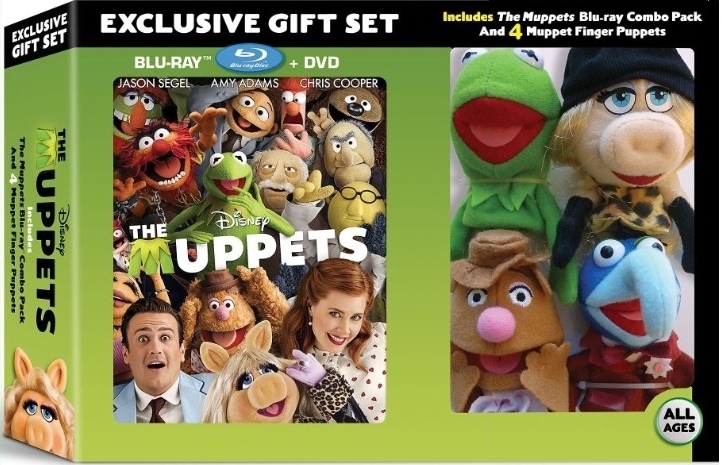 But here’s a closer shot I took of the finger puppets themselves. 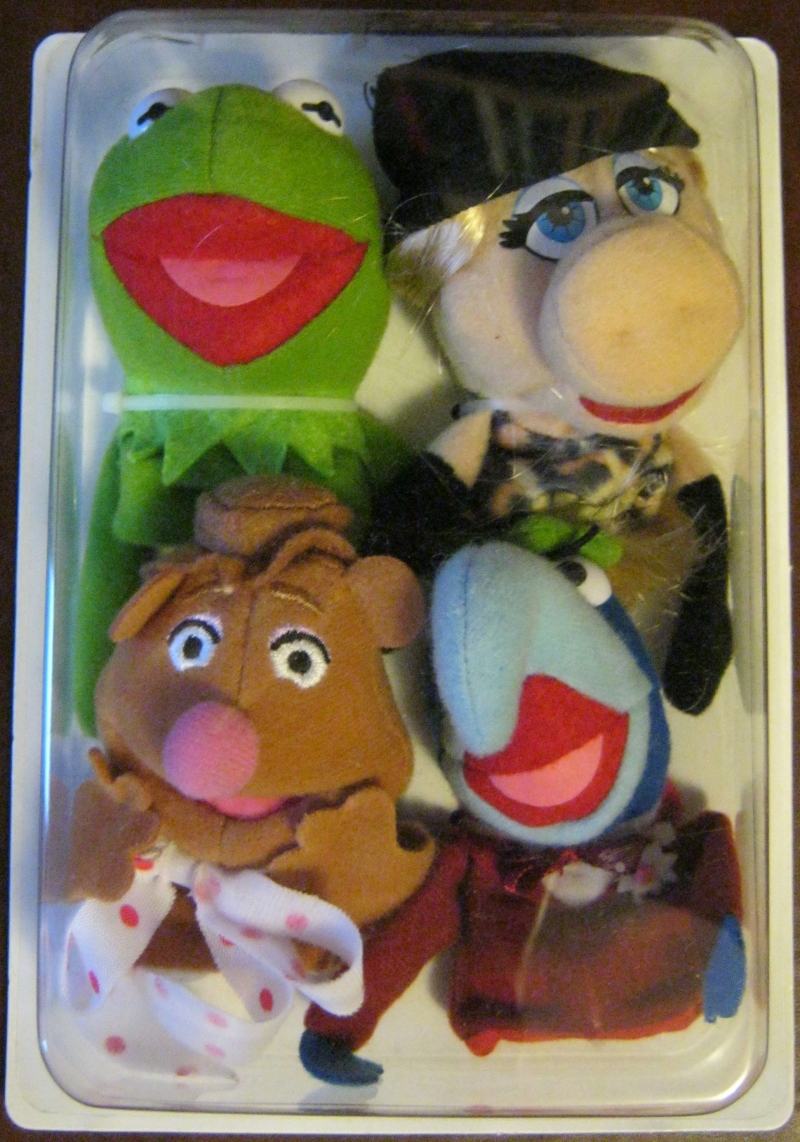 Admittedly, they’re a little cheap-looking, but I think they’re still a fun collectible.

This gift set is still readily available from Walmart.

With that, I had one copy of the Blu-ray, a SteelBook case to put the discs in, and the finger puppets. I considered myself done. I honestly had no intention of collecting any more merchandise for this movie… until I found out that Best Buy had another exclusive – a metal lunch box.

This one seemed to sneak up on everyone at the last second. I don’t recall any advertising for it until street date, at which time people started buzzing about it. Naturally, collectors swooped in and cleared these out of most stores pretty quickly. I was a little disappointed, but decided that the SteelBook case was plenty enough for me anyway. I didn’t need the lunch box.

Well, as fate would have it, I went into a Best Buy store a few days later to look for something else, and there was one copy sitting there, calling to me. I didn’t need the lunch box, until right then, when impulse dictated that I neeeeeded it. 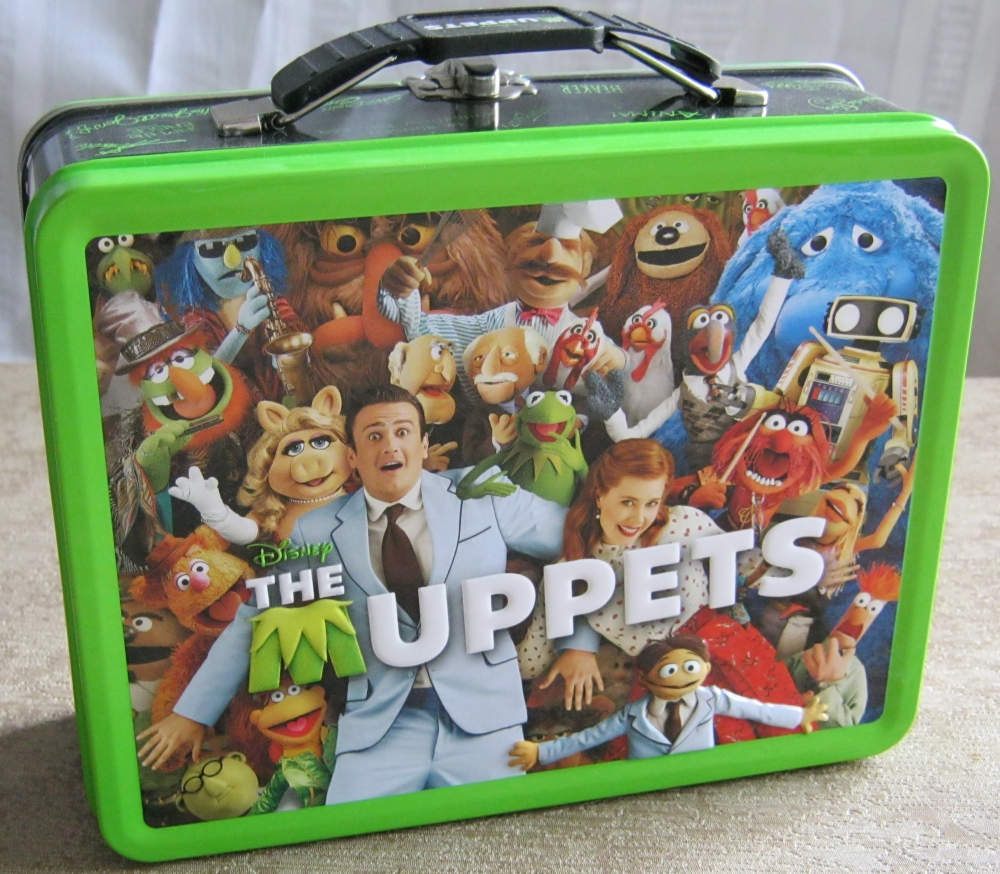 This is a small-size lunch box, but it’s metal, not cheap plastic. I’m not really thrilled that the same image appears on both the front and back, especially since it’s the Jason Segel-focused art. (I much prefer the Muppets-focused art on the SteelBook.) The Muppets logo and Muppet Gary (lower right, just off center) are both embossed and stand out from the rest of the picture.

Here are the sides and bottom: 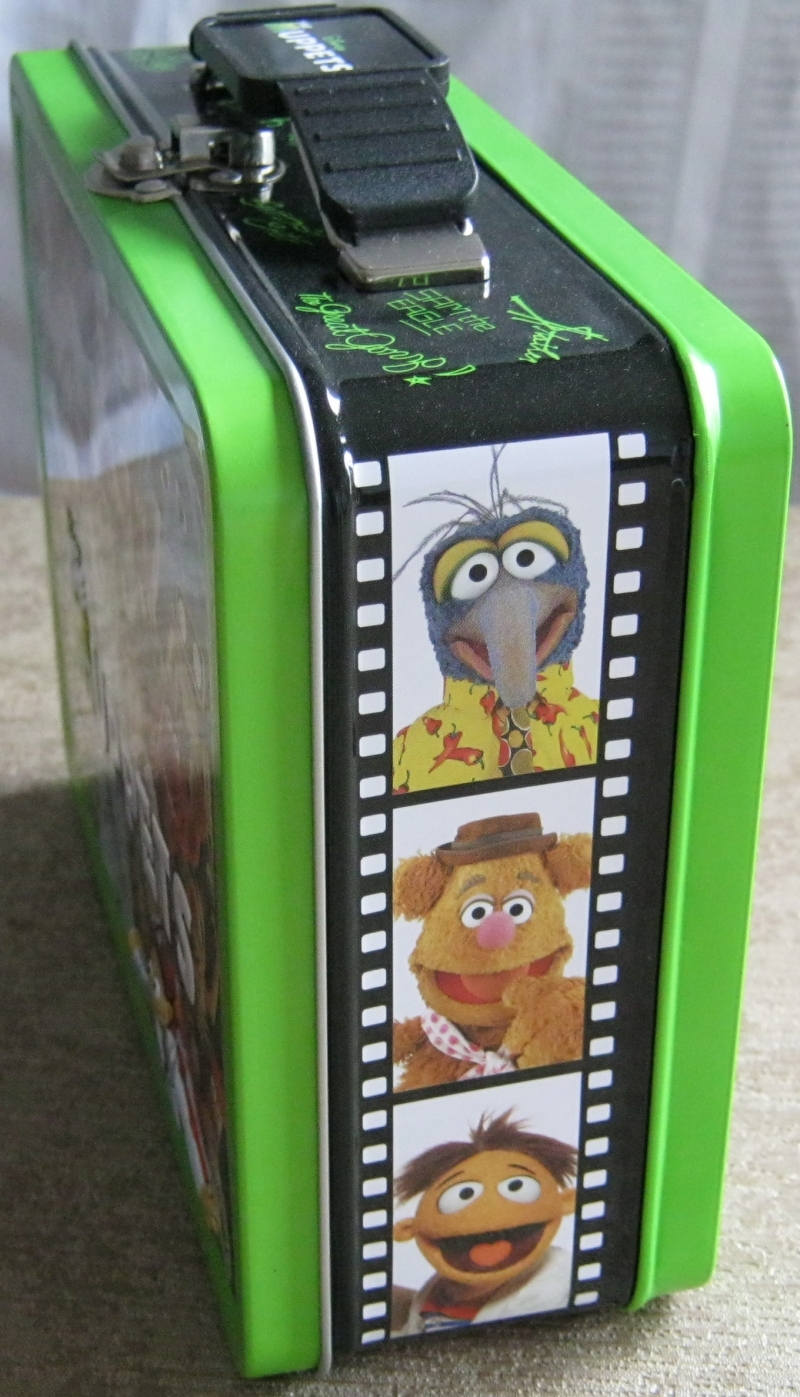 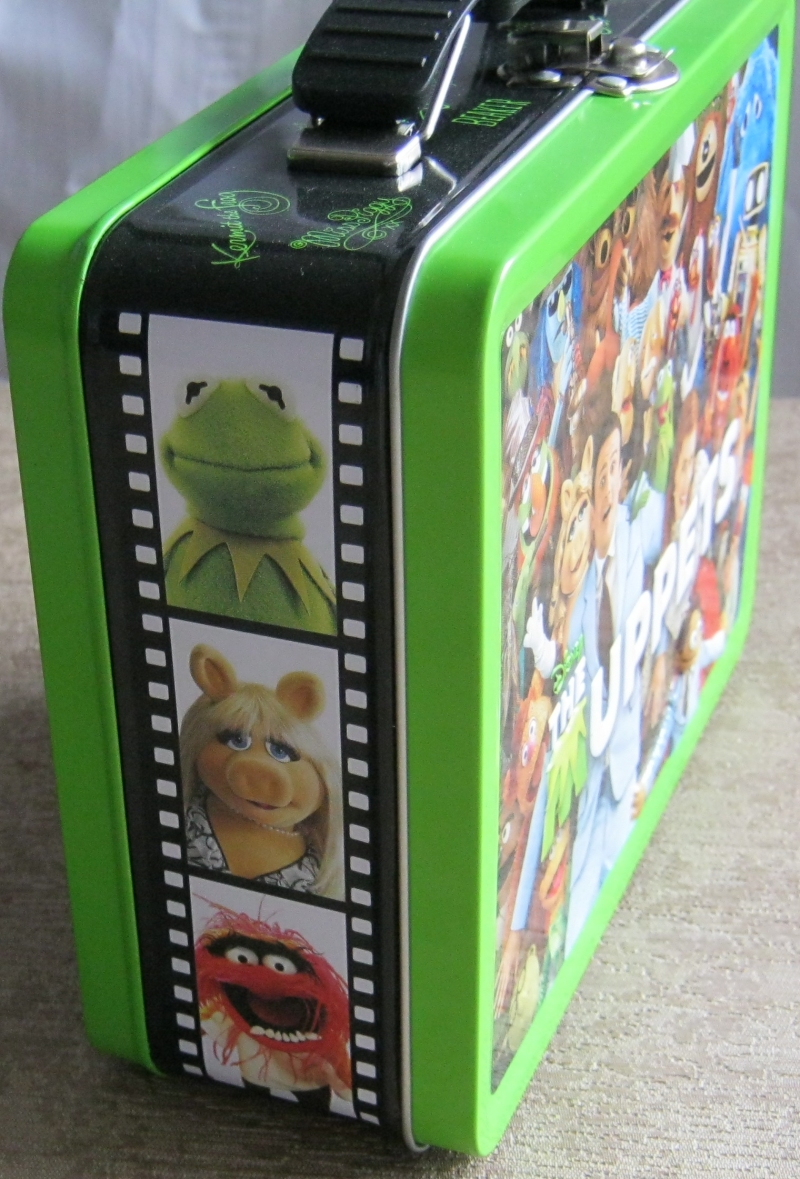 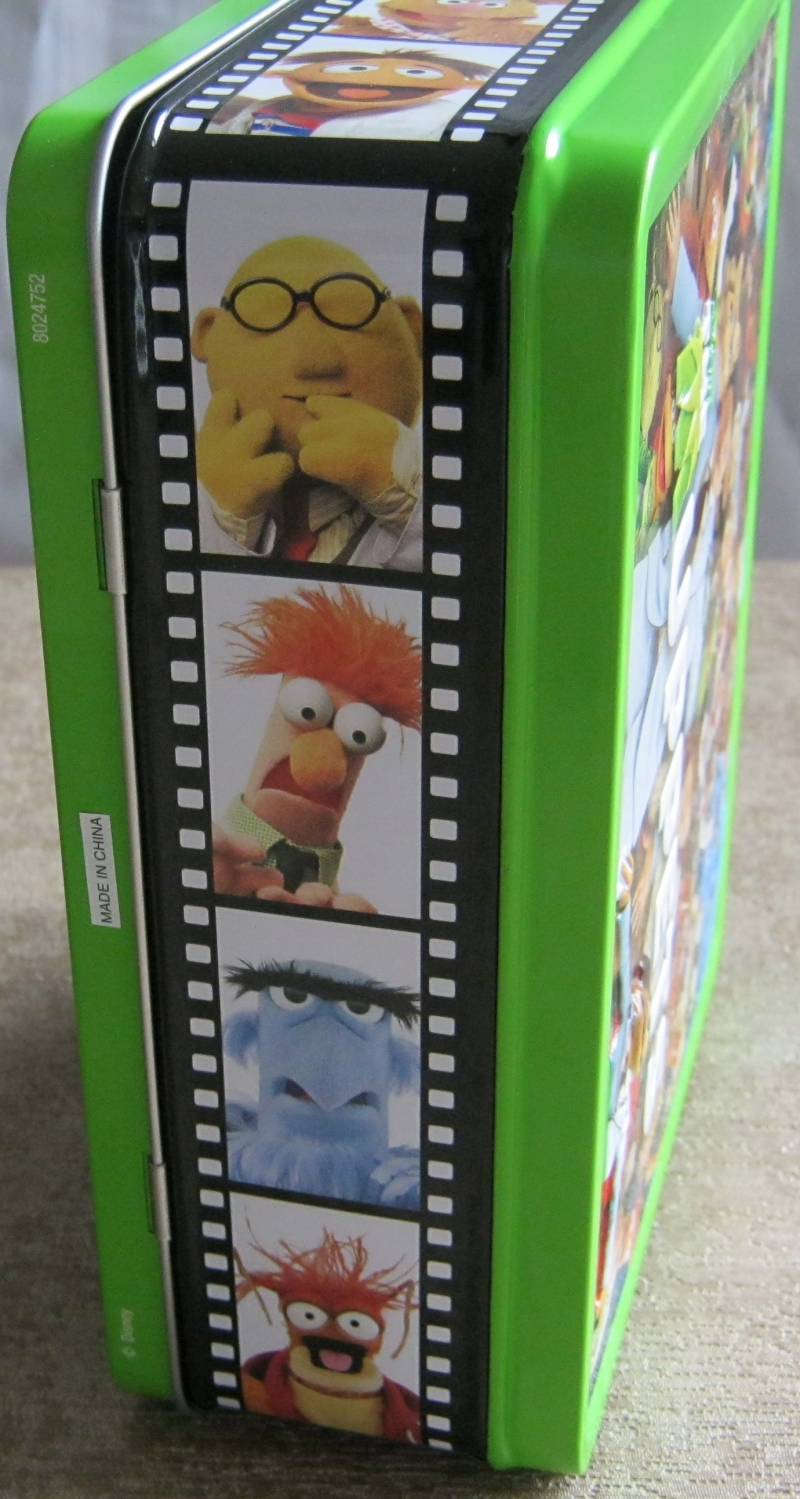 The lunch box was an in-store exclusive (not available for online shipping) and sold out quickly, but, again, copies can still be obtained on eBay.