A couple of months ago, I started the “Unboxed” topic as a planned recurring feature where I would pull some of the DVD, Blu-ray and even Laserdisc box sets that I’ve collected over the years off the shelf and take a look at their contents. I started with the ‘Kill Bill’ DVDs from Japan. While that was a lot of fun, I just haven’t had much time to take the necessary photos of my other collectibles until now. Today, we’ll examine Disney’s swanky ‘Aladdin’ Laserdisc box set from Japan.

Before I get to the photos, I have a quick story about the ordeal it took to acquire this box set in the first place. Back in the day, I used to post regularly to the alt.video.laserdisc USENET newsgroup. Before eBay, this was a good place for collectors to buy and sell Laserdiscs from one another, and was practically the only way to find rare titles (especially rare imports). I’d been on the lookout for a copy of the ‘Aladdin’ box set for a while when I finally spotted a “For Sale” post that caught my attention.

The seller went by the name of Dale. I contacted him by email, and we negotiated a price and shipping arrangements. I sent him a check the very next day. (Remember, this was long before PayPal.) Everything seemed to be fine until about a week later when Dale suddenly sent me a message saying that he couldn’t sell me the disc because I never confirmed my mailing address with him. That was an outright lie, as I had sent him my address and he had responded to that email. I pointed out the error to Dale and asked him to honor the terms of our agreement. It turns out that, in the meantime, someone else had posted a “Wanted to Buy” message on the same newsgroup asking for that particular disc and Dale, sensing that he could make a better deal for himself, offered the disc to that person for more money than he had already accepted from me. I confirmed this with the person who posted that second message. When I confronted Dale about this, he became very evasive and promptly cut off contact with me. I was forced to place a stop-payment on the check (at a $20 fee from my bank!). Fortunately, I eventually found another source for the box set, but the bad taste of this transaction still rankles me to this day. I think about it every time I look at the box set.

Was the Laserdisc worth the hassle to obtain? I think it’s a pretty handsome package. Click on any of these photos to enlarge. 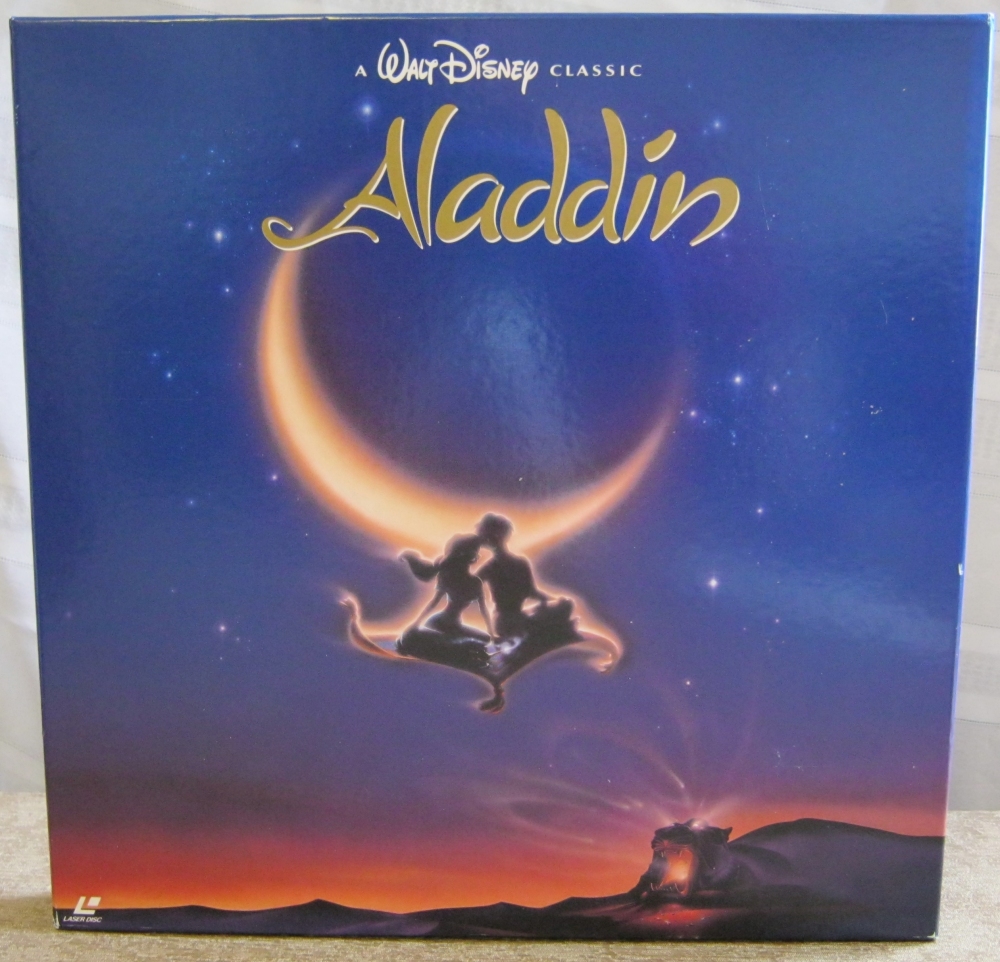 The box contains three Laserdiscs. Each of the discs comes in its own sleeve. The movie is encoded in CAV format and spread to four sides across the first two discs. (The CAV format only allowed 30 minutes per side.) Here are the two movie discs, and the obi-strip that goes around the outside of the box: 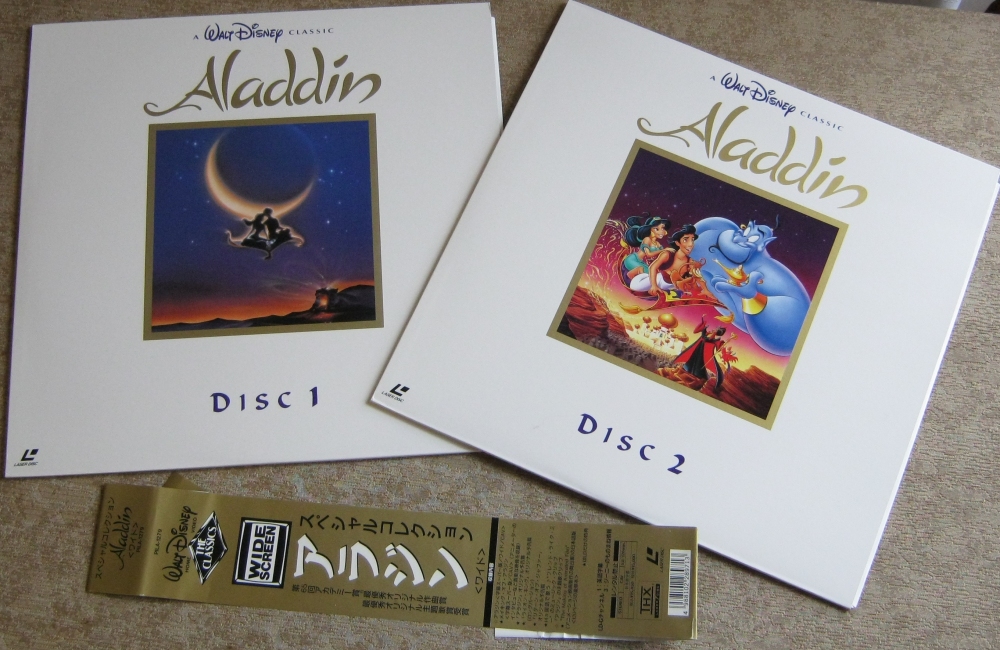 Unlike the domestic Laserdisc edition, which included only one theatrical trailer for an extra, the Japanese release has two trailers, a music video and a dubbed clip of one of the songs on Side 4 after the end of the movie. Disc 3 contains a 30-minute featurette called ‘The Making of Aladdin: A Whole New World’. Also included in the box is the softcover book ‘Aladdin: The Making of an Animated Film’ by John Culhane. 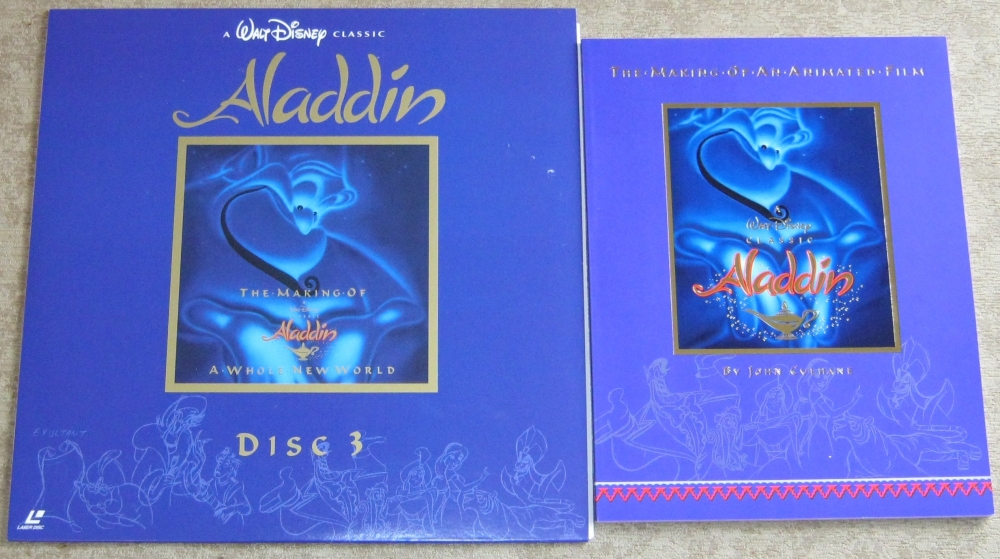 As a Japanese product, it stands to reason that the text of the book will be in Japanese. However, the book also has a great number of drawings and artwork samples to look at. 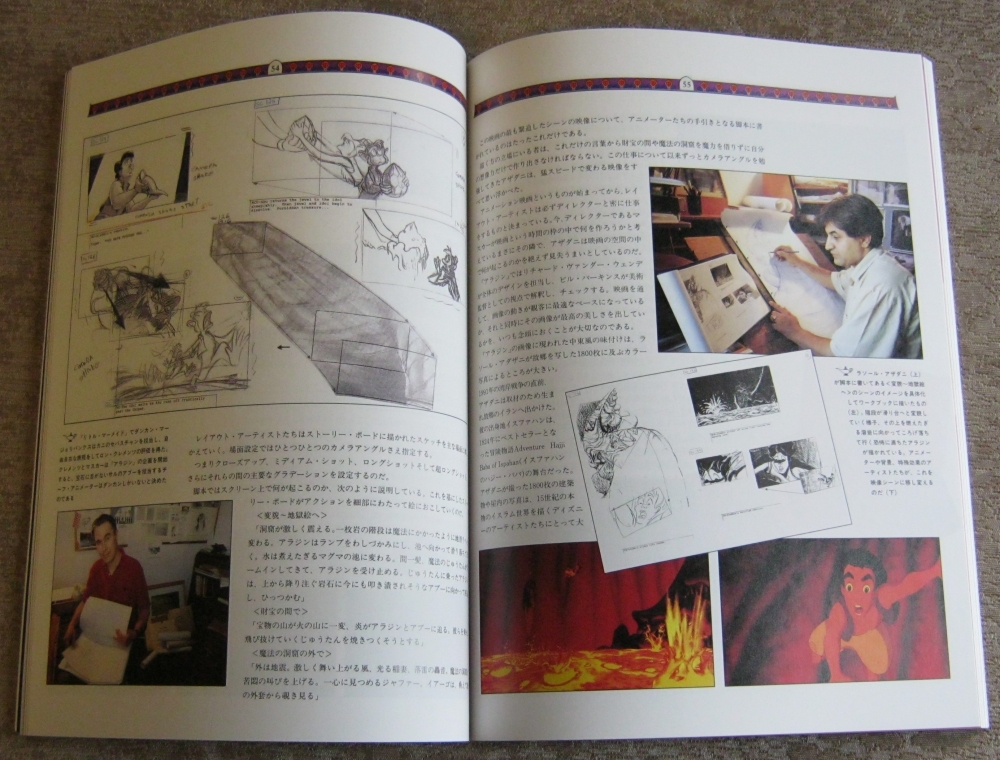 Some time after buying this, I came across an English language copy of the book in a Barnes & Noble bargain bin. 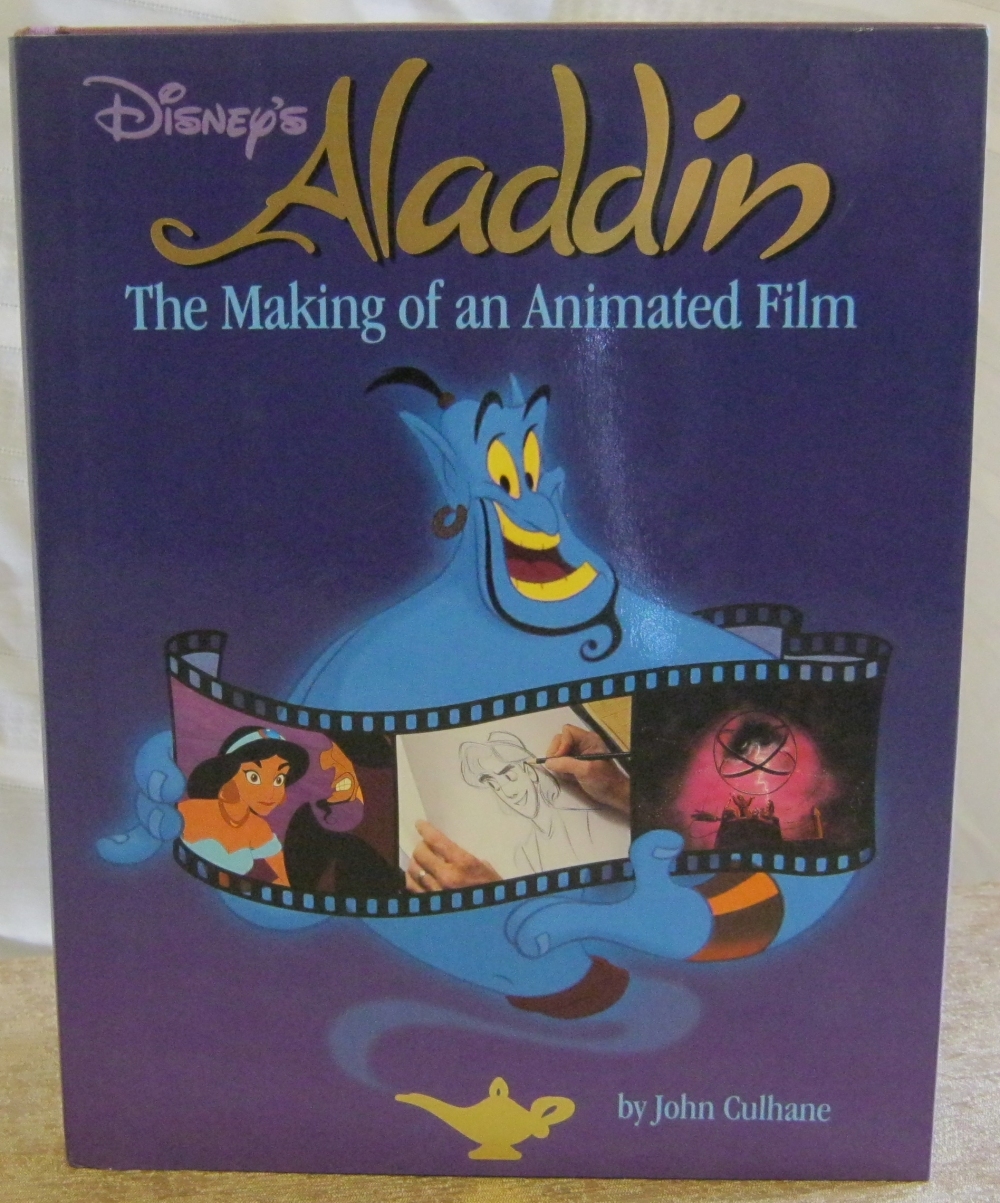 Unfortunately, the copy I found was a hardcover and much too large to fit inside the box set. It appears that the book was also issued in paperback in the U.S. It’s long out of print, but both new and used copies can still be obtained from third-party sellers on Amazon. I’m fine with keeping the hardcover (which I paid a whopping $3 for, as I recall) separate from the box set. In any case, here’s a sample of the interior pages of the English copy: 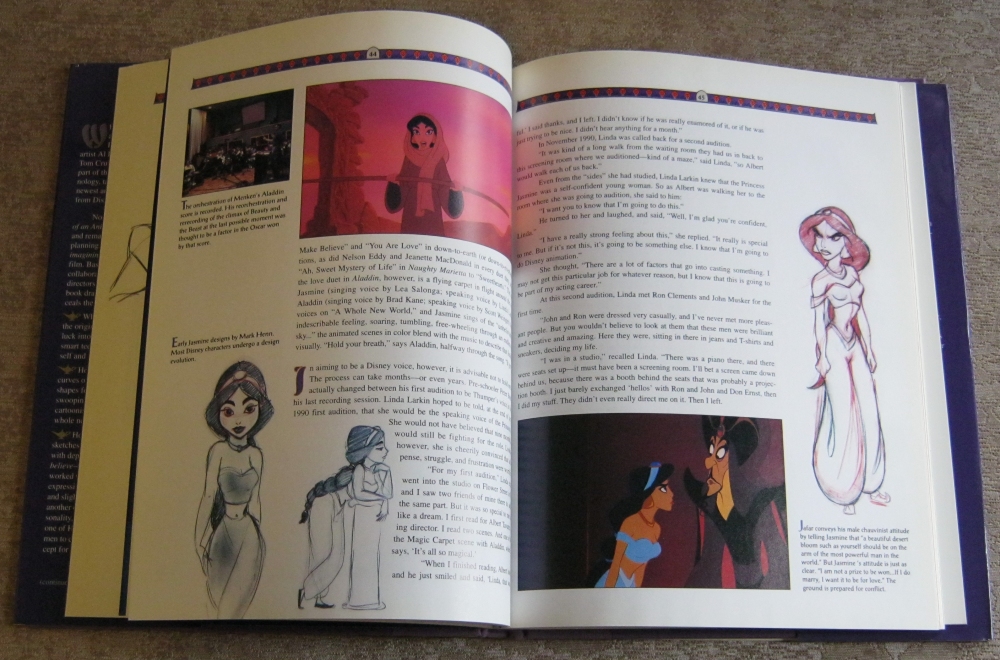 Although a nice collectible, the Japanese Laserdisc isn’t particularly good for watching, given that the movie was transferred with large, non-removable Japanese subtitles burned into the picture. For the purposes of watching the movie, a copy of the American Laserdisc is also necessary. (I suppose you could substitute the DVD these days, while we wait for a Blu-ray.) I’m not sure whether it was coincidental or planned, but the Japanese box set happens to have just enough extra room inside to fit the American CAV Laserdisc set as well.

That American LD came in a pretty nice-looking gatefold jacket.

This is the interior of the gatefold:

This is a convenient way to keep both copies of the movie together, though I’ll be honest that I almost never watch Laserdiscs on my home theater screen anymore. The picture quality is rather painful to watch on a large projection screen. Regardless, nice box sets like this still offer me plenty of reasons to treasure what remains of my Laserdisc collection.