A while ago, I blogged about Modiphius Entertainment’s ‘Thunderbirds Co-Operative Board Game’ campaign, which launched on Kickstarter earlier this year as part of the cult TV series’ 50th anniversary celebration. My copy finally arrived in my mailbox and, just as anticipated, this new game designed by Matt Leacock (‘Pandemic’) is F.A.B.!

Set in the year 2065, ‘Thunderbirds’ follows the exploits of International Rescue: a secret organisation committed to saving human life, secretly founded and funded by the millionaire Tracy family. International Rescue has a host of technologically advanced land-, sea-, air-, and space-rescue vehicles and equipment ready to launch at a moment’s notice.

‘Thunderbirds’ is a fully co-operative board game for 1-4 players who will assume the roles of the heroic Tracy brothers (Scott, Virgil, Alan, Gordon and John), as well as Lady Penelope, and race around the globe in order to avert major disasters and thwart the evil schemes of the nefarious Hood. 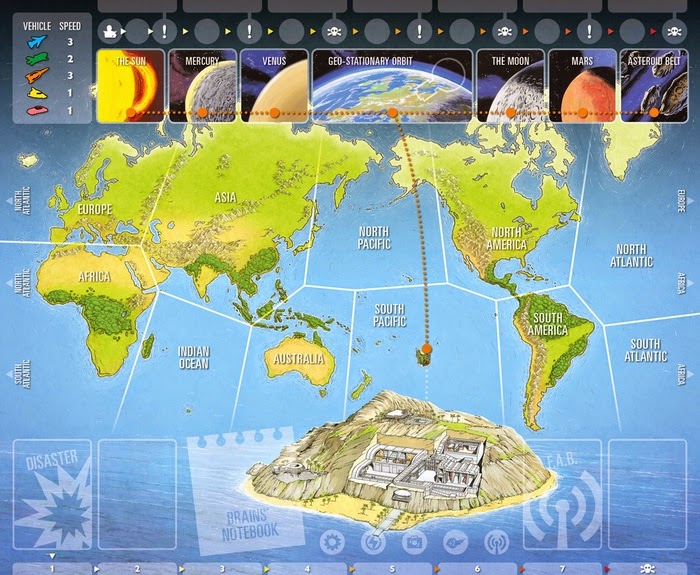 Although all of the Tracy brothers as well as Lady Penelope are actually in play during any given game, before the game begins players are assigned a specific role, and each role card grants a special ability. For example, Gordon Tracy is better at attempting sea rescues. Once per turn, he may also use an action to draw a Determination token – one of five types of tokens that aid the players throughout the game and may be required to overcome certain crises. 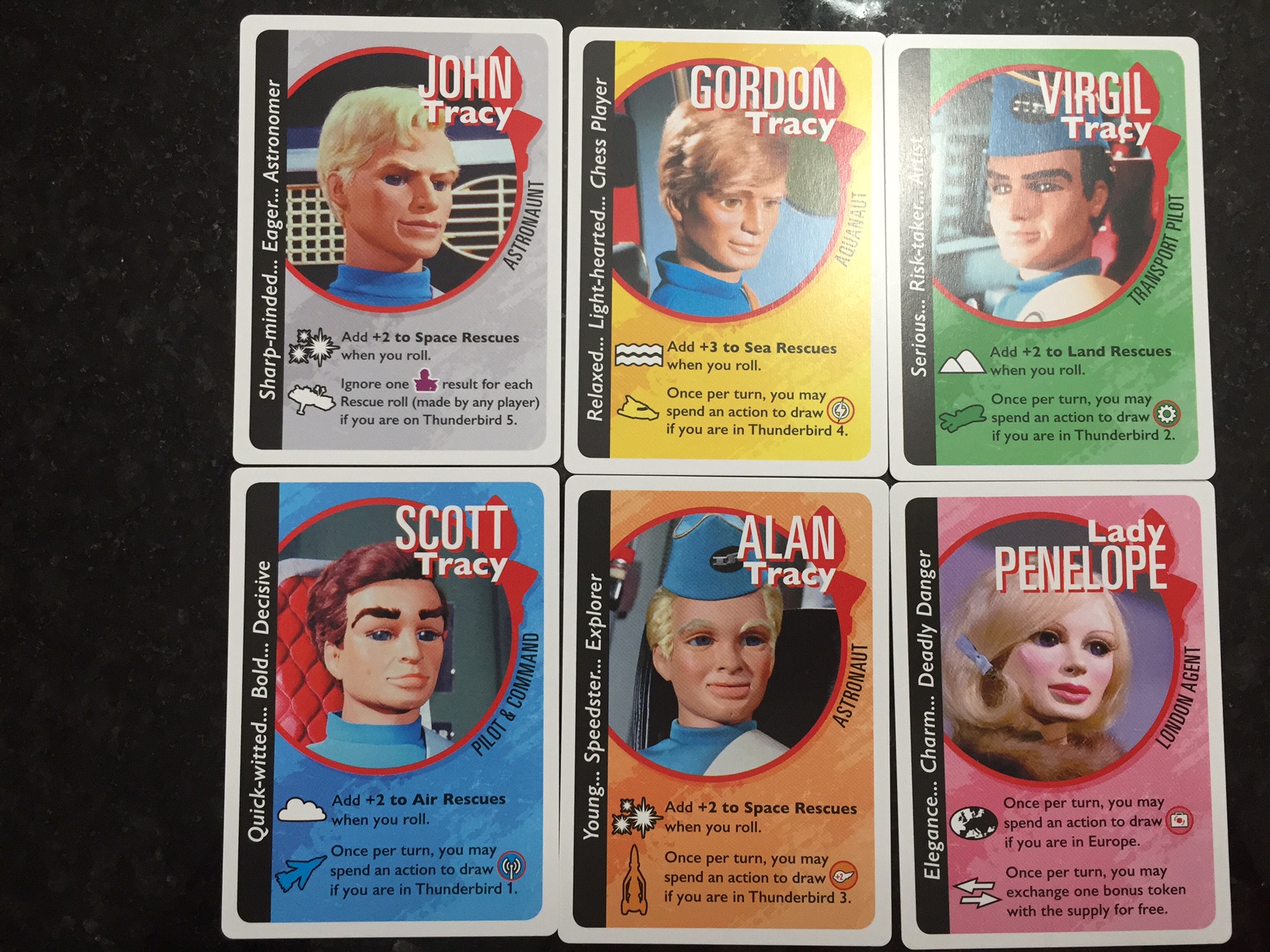 Players move around the map utilizing the iconic futuristic rescue vehicles from the series. Thunderbirds 1 through 4 (and their corresponding pilots) start the game at Tracy Island in the South Pacific. John begins in orbit aboard Thunderbird 5, and Lady Penelope is poised for action behind the wheel of FAB 1 over in Europe. Each vehicle has a movement value (a chart is conveniently located on the upper left of the board) as well as a certain number of crew slots where players shift characters around when necessary during the game. Thunderbird 2 (green) can also carry one of the smaller vehicles (FAB 1 or Thunderbird 4) or up to two of ten different pod vehicles. Most pod vehicles (cardboard tokens) are built during the game. However, players start every game with the Mole.

The only way to win at ‘Thunderbirds’ is by defeating three schemes by The Hood. Schemes are challenge cards of varying difficulty levels that players must race to accomplish before the Hood (represented by a purple figure) moves down his track on the board to trigger them. Whenever the players draw a “The Hood Advances” card or rolls his image on the dice when conducting a rescue, he shifts one space to the right – and his evil plans come closer to fruition. If he reaches any one of his schemes before the players can eliminate them, then they’ve failed and the Hood wins the game. 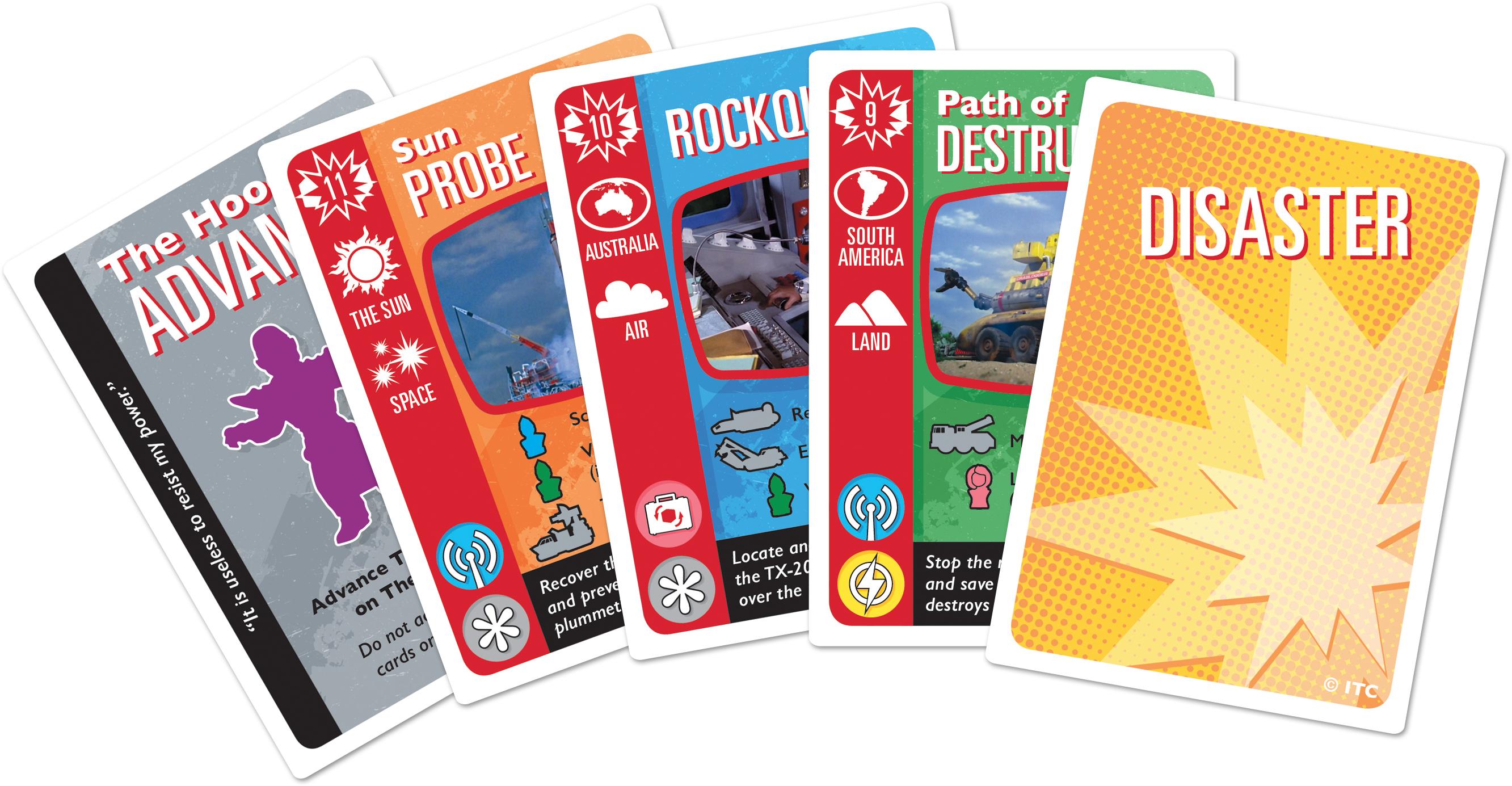 Of course, the Hood doesn’t make it easy. Not only does he activate nasty event cards that do things like destroy pod vehicles or injure characters as he moves, International Rescue also has major worldwide disasters to contend with as well. Disasters have requirements to overcome, such as specific characters and/or vehicles at certain locations or a number that the players must roll with two dice (adding any bonuses to the result). The game begins with three Disaster cards flipped up on the Disaster Track and a new one is added (usually) at the end of every player’s turn. When Disasters are added, the ones in play shift to the right. If any of them reaches the end, it’s game over.

‘Thunderbirds’ has that same puzzle-like quality of Leacock’s other games (‘Pandemic’, ‘Forbidden Island’ and ‘Forbidden Desert’) where you race against time and timing is everything. Players only have so many actions a turn, and as disasters pile up and schemes are about to unfold, things can get pretty intense pretty quickly. I’m not kidding, just when you think things are under control the world will erupt in chaos.

In fact, ‘Thunderbirds’ is probably one of the most challenging games you’ll ever set on your table. I’ve had a chance to play the game with friends three times now (all on “Introductory” level) and we lost every single one of them. Our second game was actually over not even five minutes after setting it up. Hilarious! So fair warning: The Hood in this game is much smarter than the one on TV.

[Buy the ‘Thunderbirds Co-Operative Board Game’ from Amazon.] 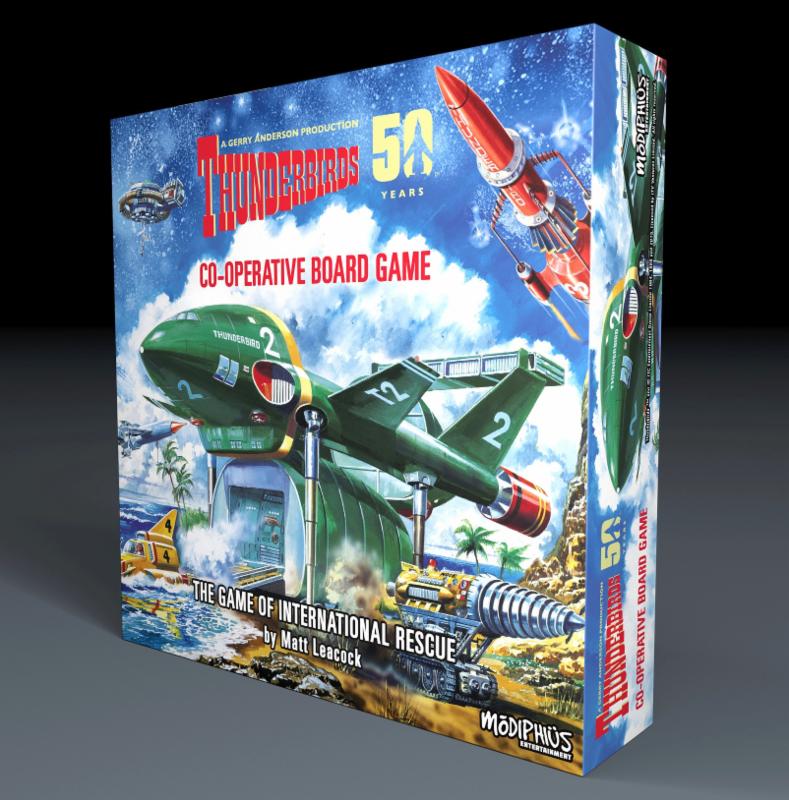