When a mega-blockbuster like Steven Spielberg’s ‘Jurassic Park’ turns 25, you can bet it’s going to spare no expense on the party. The genetically-engineered film series has already made a grand showing on 4k UHD and will soon return to the big screen with another chapter in the franchise. Courtesy of Ravensburger, its newest attraction is heading straight for your tabletop in the form of a board game that takes us back to where it all began: Welcome to ‘Jurassic Park: Danger!’

“The first visitors have arrived at Jurassic Park to see its miraculous dinosaurs firsthand. But chaos has hit Isla Nublar – the power is out, and the prehistoric creatures are on the hunt! One player controls the T. Rex, Dilophosaurus, and Velociraptor, prowling through the jungle to attack the humans. The other players team up as characters from the classic movie, struggling to get Jurassic Park back online and escape the island before they become prey!”

‘Jurassic Park: Danger!’ is a lightweight one-vs.-many style of game for two to five players, and is primarily based on the second and third acts of the original film. The dinosaurs are already running amok and the humans are desperately running for their lives. All the dinosaur player really has to do to win is cause carnage and mayhem – slowly whittling down potential victims until three of them have eventually been eaten… errr, eliminated. Up to four other players, however, must jointly find a way to have their characters complete certain objectives and survive long enough before two or three of them (depending on the number of players) can make it to the helicopter and claim victory. 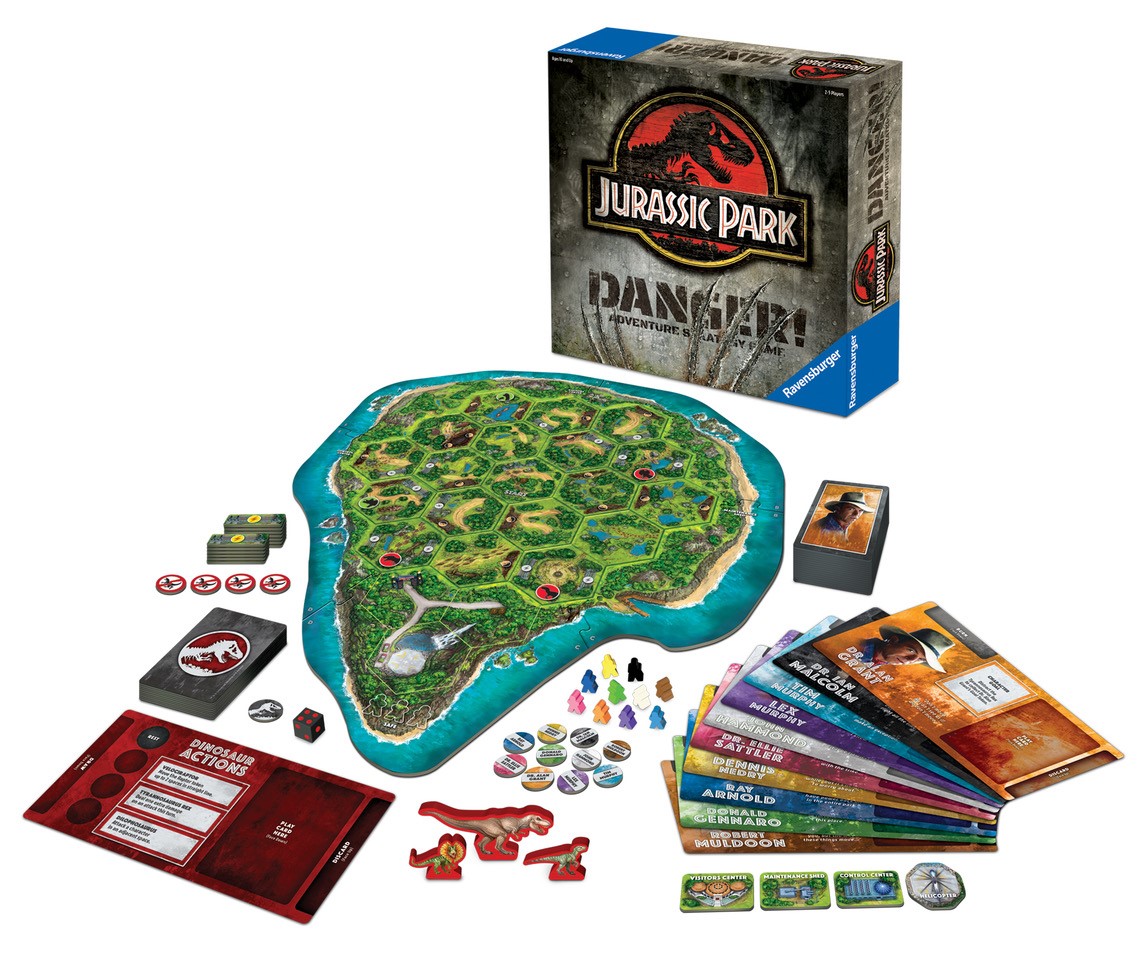 Most of the action takes place on a modular game board representing Isla Nublar that has to be assembled before play. It doesn’t take long to put together and has a semi-random tile setup, so every game will have a different configuration. The three main park locations – Control Center, Visitors Center, and Maintenance Shed – are placed on their indicated spots on the board and all must be activated before the helicopter can arrive. (This is the primary goal for the humans.) The dinosaurs are also placed on their indicated spaces and the human characters all begin the game in the middle on the “Start” tile. While the dinosaur player always uses the same trio of terrible lizards each game, those playing the humans can choose (or randomly select) from ten memorable characters all masterfully played by Jeff Goldblum:

Anyway, the gameplay of ‘Jurassic Park: Danger!’ is rather simple and uses a programming mechanic to manipulate pieces on the board. Every player has a personal deck of ten cards. At the start of every turn, each player secretly chooses a card from their hand and places it face down. Then, the dinosaur player flips over their card first and performs the actions listed. These actions can allow dinosaurs to move or climb (over fences and cliffs) into an adjacent tile, or go into Sneak Mode to temporarily make their whereabouts unknown. The humans have these same basic actions, but can also cause distractions to protect their teammates and have unique special cards specific to each character, like Dr. Ian Malcolm’s Chaos Theory. Here’s what his cards look like: 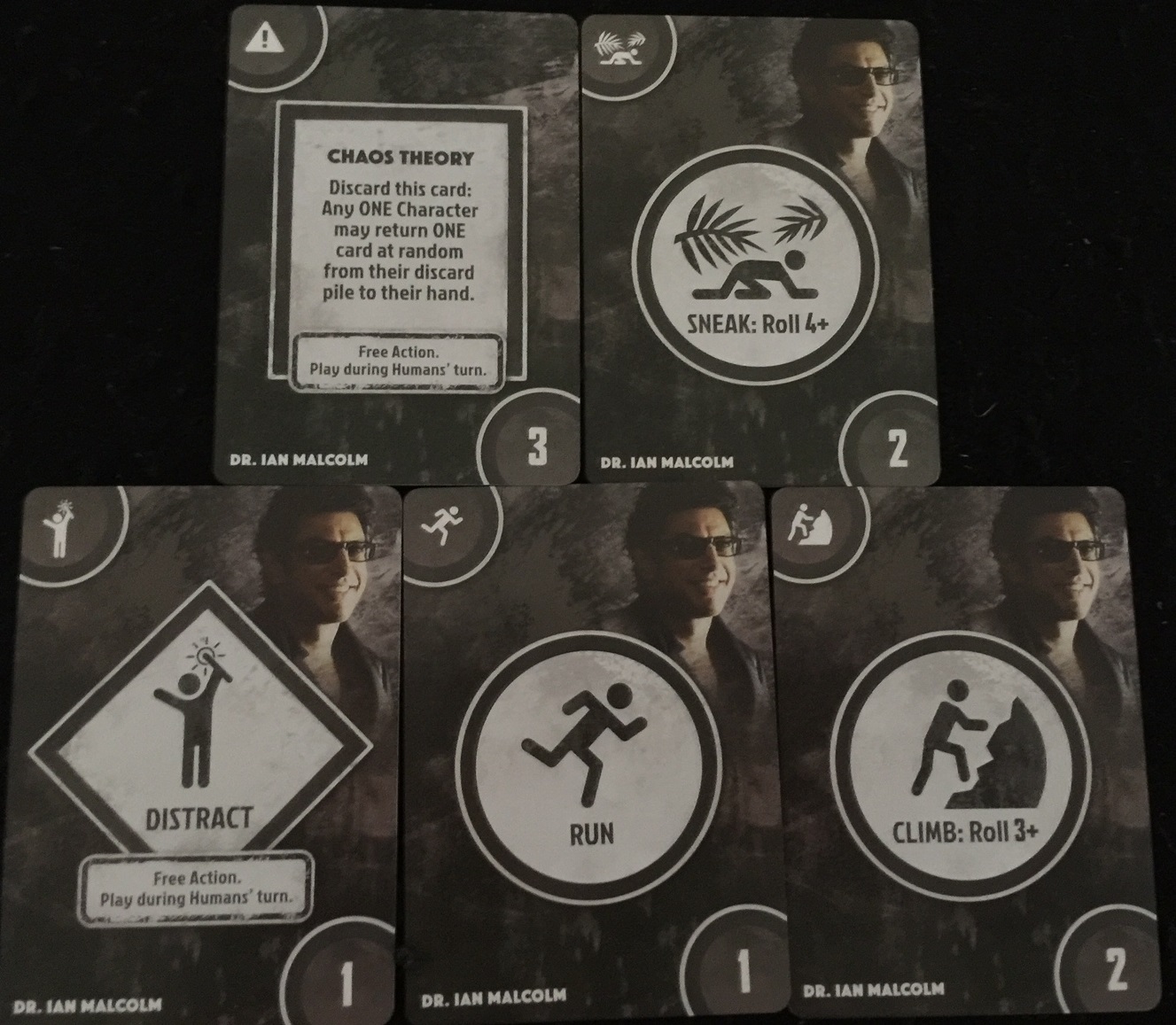 What’s most interesting about the cards is that every human’s deck pulls double duty as their life force. Certain things, like a dinosaur attack (basically just moving a dinosaur into the same tile as a human) or boosting a die roll when performing skill checks, forces that character to “burn” a card by permanently removing it from the game. This really puts the pressure on. If any character runs out of cards on their turn, then they’re defeated and scored by the dinosaur player before being replaced by a fresh character (if applicable).

Each character has their own player mat (matching the color of their meeple) which has a thematic personal goal that usually has to be completed in some fashion. Completing the goal will often reward the character with a goal token, but a few characters, such as John Hammond, actually start the game with a goal token and have to find some way to keep it. Character goals don’t just reenact favorite movie moments, they increase the challenge as well, since possessing a goal token is basically your ticket off this savage island. 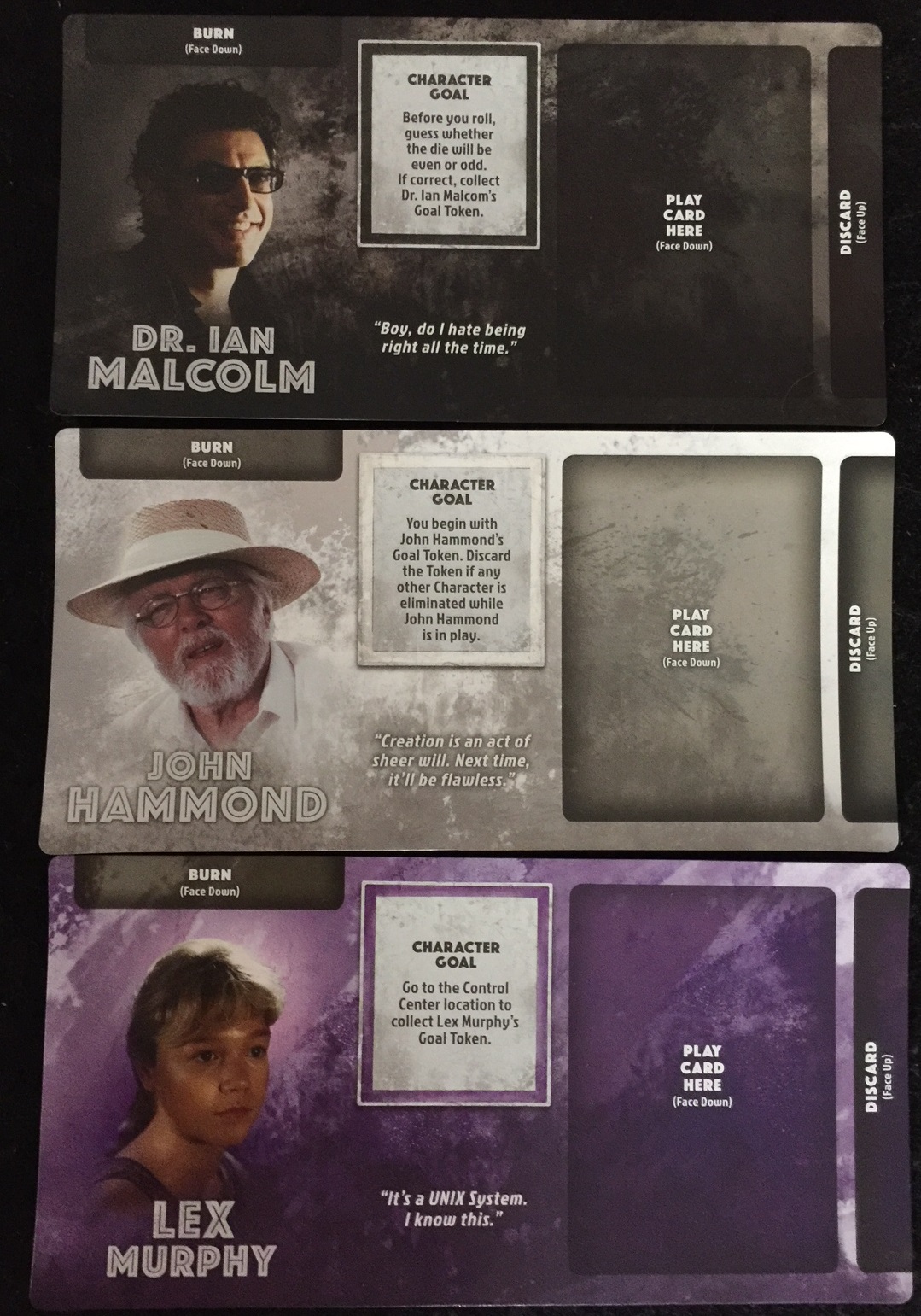 The dinosaur player also has a mat, but instead of having goals, they may choose to use one of three dinosaur abilities at any point on their turn (in addition to their basic actions). The only stipulation is the same ability can’t be used two turns in a row. The Raptor can move up to two spaces in a straight line, the Dilophosaurus can attack a character on an adjacent tile, and the Tyrannosaurus Rex inflicts extra damage when attacking – making them a very scary triple threat to deal with on the board. 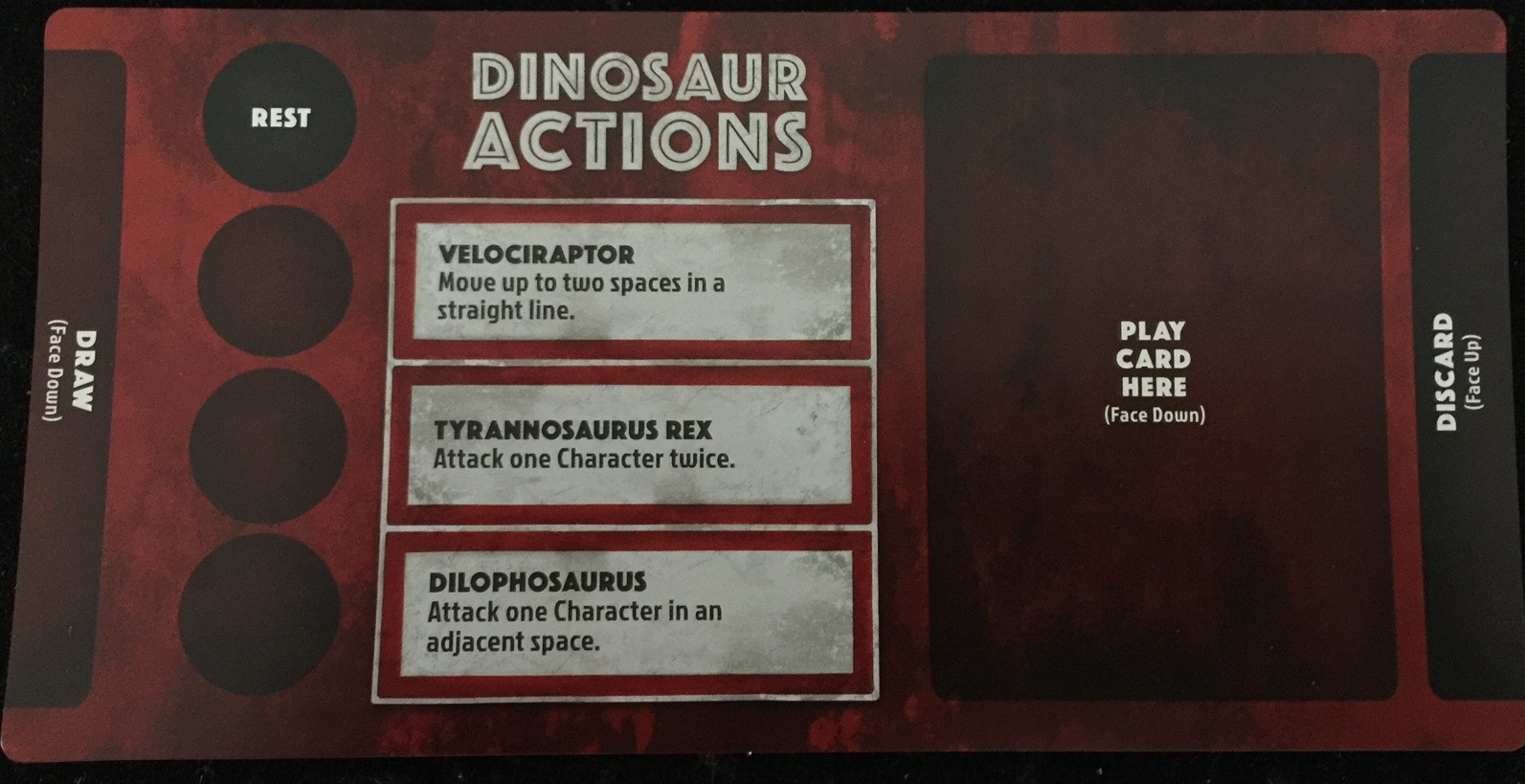 One thing ‘Jurassic Park: Danger!’ has an abundance of is theme. From the unique traits of each playable character to the way the game recreates key plot points and your favorite scenes, many fans of the film will find a lot to like here. Just like in the movie, it’s not exactly a picnic in the park, particularly for the human players who have it rough from the very beginning. Be prepared; time isn’t on your side and characters will die. The personal goals don’t make things any easier by throwing a wrench into your already desperate plans. Fortunately, there is some relief by activating the locations which grant bonuses, like being able to recover cards from a discard pile, creating safe dinosaur-free zones, and powering up the electric fences all over Isla Nubar. Being the humans is punishing and often frustrating, but I like that puzzle aspect of trying to make things work the best you can even when things may seem hopeless.

Playing as the dinosaurs is an entirely different experience. As the dinosaurs have the one-track mindset of hunting down and eating prey, they play very aggressively and their options are more limited. This makes sense from a thematic standpoint, and chomping on humans can certainly be a gratifying way to let off some steam. However, it makes the dinosaurs feel like they’re on autopilot at times. That doesn’t mean they don’t have any strategic decisions, but if you go in expecting to have a ton of choices, you may be disappointed. Rules to automate the dinosaurs and allow for complete cooperative or even solo play would have also been a welcome addition.

As for the components for ‘Jurassic Park: Danger!’, they’re generally pretty good. The board frames and tiles are a thick cardboard similar to the quality you’d expect from Ravensburger puzzles. They fit together on the snug side, but if you take some care with them they should be fine. All of the player pawns are made of wood too, which is nice. Both the cards and player mats, however, are pretty thin, and the rules that are included in the box are unclear in places, but Ravensburger has already updated them here so that isn’t a huge deal. On the whole, some things could be better, but with a price tag of under $25, you can’t really complain too much.

“Hold on to your butts.” – Ray Arnold

If you’re looking for a lightweight dinosaur-themed board game, ‘Jurassic Park: Danger!’ is a fun alternative to ‘Raptor‘ that I previously reviewed in this blog. What comes in the box isn’t bad for the most part, especially considering the price. It doesn’t hurt that this game is based on one of the most popular movie franchises of all-time, and the theme is obviously the game’s biggest selling point. With easy-to-learn mechanics and asymmetric gameplay that puts players in control of either the film’s classic characters or its bloodthirsty on-the-loose attractions, families and fans of the franchise will likely find their money’s worth with this purchase. Recommended. 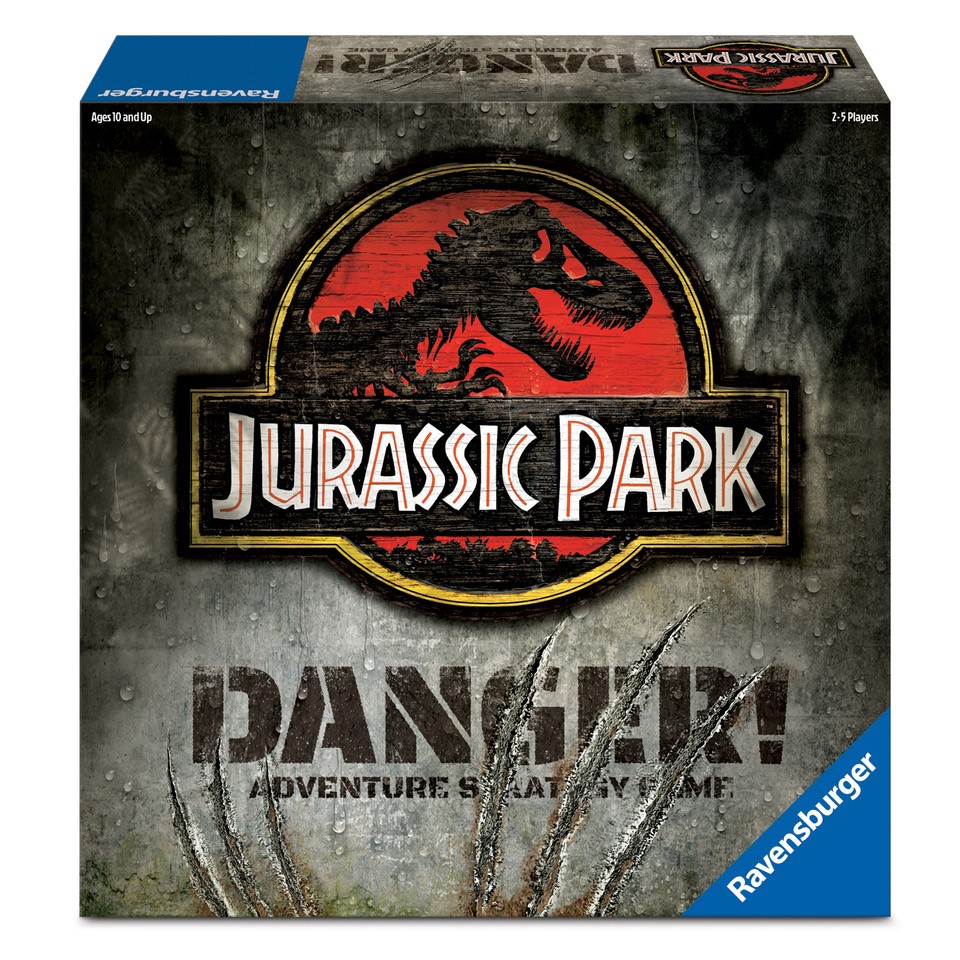 [‘Jurassic Park: Danger!’ is now available exclusively at Target for $24.99.]