In my quest to improve bass response in my home theater, first I had to move the location of my subwoofer. After that, I found myself doing something I’d never paid much attention to in the past: adjusting the subwoofer’s phase knob.

Technically, it wasn’t a knob I used. The SVS SB-4000 doesn’t actually have any knobs on the back. (The header image to this post is a photo of my prior SB-2000.) For its new models, SVS has moved setting adjustments to a handy mobile app that I loaded onto my smartphone. 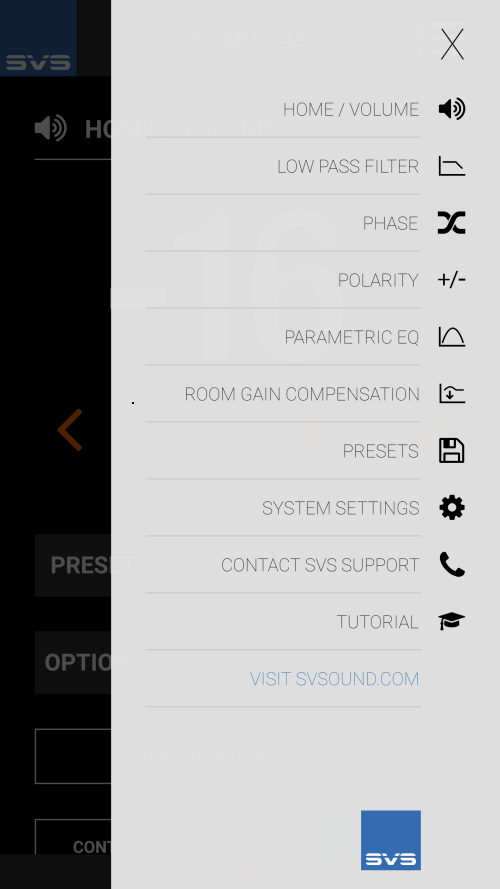 I’ve always approached the home theater hobby as a videophile first who tries to do his best with audio. To that end, I’ve never really understood how subwoofer phase works. Until recently, I’d placed my speakers and subwoofer where they were most convenient in my room and relied on Audyssey auto-calibration to take care of the rest. As I’ve discovered, unfortunately, Audyssey has its limits, and adjusting phase seems to be one of them. In fact, I don’t think it does anything with that at all.

You can’t really blame me for not having a clear understanding of what Phase Control does. The manual to the SB-2000 sub states directly: “For connection to an A/V receiver, it should be set to 0 degrees.” The SB-4000 manual is only marginally more detailed: “Solves sound wave cancellation issues at specific frequencies and perfectly aligns the arrival of output from speakers and subwoofers to your listening position. Normally set to 0° if the subwoofer is near the main speakers. Adjusting Phase shifts timing of the subwoofer output to align with the main speakers or additional subwoofers.” That’s still not particularly helpful. As I recall, a subwoofer I owned in the past had a simple two-way Phase Control switch (either 0-degrees or 180-degrees), and its instructions said to use whichever sounded loudest. That’s probably not the most scientific answer either.

As I’ve struggled to get the hang of Room EQ Wizard, I found that my bass response had a significant dip in the midrange from 50-70 Hz when my subwoofer was in its original location to the right of my center speaker. Moving the sub to the left side of the wall decidedly improved that, but didn’t quite remove the dip. Following the advice of a knowledgeable friend, I took REW measurements at the default 0-degree setting and then played with the Phase Control to see if it offered any improvement. I started at 180-degrees, and then tried a halfway compromise at 90-degrees. I attempted some other variations as well, but none that provided any better results.

(Note that all of these readings were taken after Audyssey calibration, and with my main speakers crossed over to the subwoofer at 80 Hz.)

Of these options, 90-degrees is the winner with the flattest response in the 50-70 Hz range. It’s still not ruler flat, but my friend tells me I should be very pleased with this result. (He also tells me not to be concerned with the narrow dip at 140 Hz, which is probably not audible.) Here’s what the graph looks like after applying 1/6 Smoothing, which supposedly better represents what the human ear will hear.

I’m not sure I understand all of that, but I like that the line looks pretty darn flat up to 100 Hz in this representation.

Part of me is inclined to just let this stand and try to enjoy the results I’ve gotten, but another part of me wants to dive even deeper into this rabbit hole and see what other adjustment settings I can tweak to perhaps eke out some further improvement in bass quality.

It probably doesn’t help that the first movie I watched after calibration was ‘Star Wars: The Last Jedi‘, which has almost no bass at all in its soundtrack and seemed to cause my subwoofer to lapse into Standby mode for the entire movie. Perhaps I should watch some movies with better soundtracks first before going much further with this.