Future Shop in Canada has unveiled its next exclusive, and she’s a beauty. Oh, and the SteelBook isn’t too shabby, either.

The fourth chapter in the ‘Underworld’ franchise, ‘Underworld: Awakening’, will be released in an exclusive Blu-ray SteelBook on May 8th.

The lovely Kate Beckinsale slips into tight leather (or is it pleather?) once again as the sexy vampire warrioress Selene for a nonstop thrill ride, shooting and kicking the shit out of Lycans, humans, other vampires, and anything else unfortunate enough to get in her way.

The SteelBook art showcases Selene ready for action with two pistols closing in on her next target. Personally, I would have preferred a sexier design, but hopefully this will look better in person. Judge for yourself with a peek below: 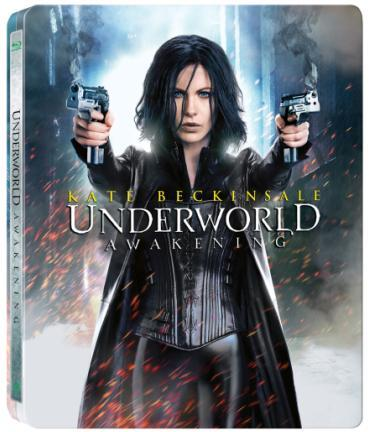 The release will be a Blu-ray/UltraViolet Digital Copy combo pack that features 1080p video, a DTS-HD Master Audio 7.1 soundtrack, and the following supplements:

The pre-order link doesn’t seem to be live yet, but it should show up soon. Unfortunately, Future Shop will not ship to the United States.