Pixar’s attempted comeback, the one featuring the Disney princesses’ redheaded stepsister, will get collectible metal packaging for its Blu-ray 3D Combo Pack at Future Shop in Canada.

Set in the rugged and mysterious Highlands of Scotland, Disney Pixar’s Brave follows the heroic journey of Merida (voice of Kelly Macdonald), a skilled archer and headstrong daughter of King Fergus (voice of Billy Connolly) and Queen Elinor (voice of Emma Thompson). Determined to change her fate, Merida defies an age-old custom sacred to the unruly and uproarious lords of the land: massive Lord MacGuffin (voice of Kevin McKidd), surly Lord Macintosh (voice of Craig Ferguson) and cantankerous Lord Dingwall (voice of Robbie Coltrane), unleashing chaos in the kingdom. When she turns to an eccentric Witch (voice of Julie Walters), she is granted an ill-fated wish and the ensuing peril forces Merida to harness all of her resources including her mischievous triplet brothers to undo a beastly curse and discover the meaning of true bravery.

The Viva Metal casing on this one doesn’t really wow me like some of the others we’ve seen from Disney in the past. I actually prefer the regular packaging design, personally. Of course, you can judge for yourself. Click the image below to enlarge: 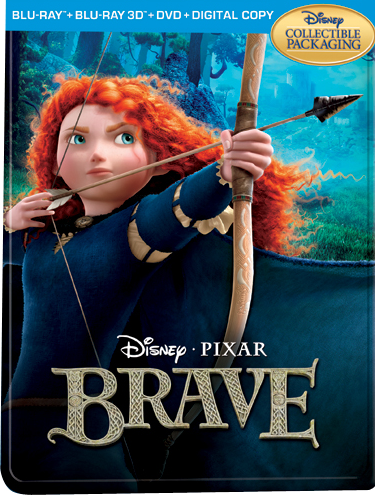 It’s still too early for specs, supplemental details or even a release date yet, but the metal packaging exclusive for ‘Brave 3D’ can be pre-ordered at Future Shop, currently for $36.99 CAD. Future Shop doesn’t ship outside of the country, unfortunately.