The 2011 computer-animated family film ‘Flop’ – errr, I mean ‘Hop‘ — looks to be getting an exclusive Blu-ray SteelBook in Canada just in time for Easter.

According to a recent post on Future Shop’s forum, the Canadian retailer is gearing up for the holiday weekend with a version of the release that will hop into stores in collectible packaging on March 23rd.

The story apparently follows E.B. (voiced by Russell Brand), the Easter Bunny’s teenage son, who heads to Hollywood in hopes of fulfilling his dream of becoming a drummer in a rock & roll band.

The SteelBook artwork isn’t bad per se, but I feel for some odd reason like I’m going to get a cavity just looking at it. Hey, at least Russell Brand’s mug isn’t plastered on the case anywhere, so that’s a plus. Here’s a look at the design: 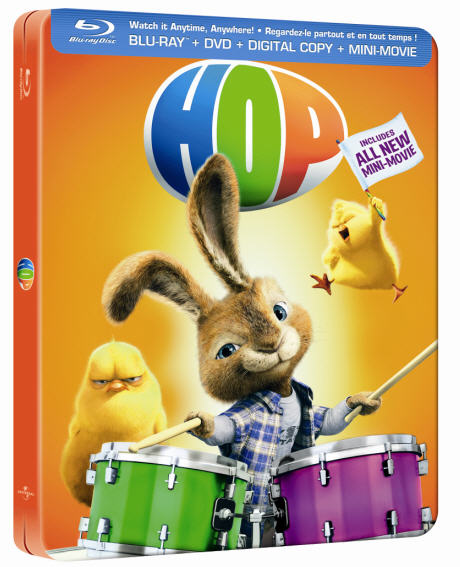 The release will be a Blu-ray/DVD/Ultraviolet Digital Copy combo pack featuring 1080p video, a DTS-HD Master Audio 5.1 soundtrack, and the following supplements:

The pre-order link isn’t available yet, but I’d imagine that one will show up shortly (if anyone cares) on the Future Shop web site. Unfortunately, Future Shop will not ship to the United States.