Kristen Stewart brought new meaning to the phrase “Hi, ho!” when she hopped from Team Robert’s bed to Team Rupert’s (Sanders) in a scandalous affair. Now it looks like Best Buy and Future Shop will take extra precautions by locking the Blu-ray of ‘Snow White and the Huntsman‘ inside a chastity SteelBook in the U.S. and Canada.

From the film’s synopsis:

In this spectacular action-adventure, Kristen Stewart (Twilight) is Snow White, the only woman in the land fairer than the evil queen Ravenna (Oscar® winner Charlize Theron). Ravenna wants nothing more than to destroy her young rival, but she doesn’t know that Show White has been training in the art of war with a huntsman (Chris Hemsworth) the queen dispatched to kill her. Together with a handsome prince (Sam Claflin) enchanted by Snow White’s beauty and power, they assemble an armed force to recapture the kingdom. This breathtaking new vision of the legendary tale from Joe Roth, the producer of Alice in Wonderland and acclaimed commercial director and state-of-the-art visualist Rupert Sanders is, in the words of Shawn Edwards, Fox-TV, “A film that soars with creativity, stylistic genius and amazing battle scenes.”

The SteelBook will be exclusively available at Best Buy in the United States and Future Shop in Canada on September 11th. The front cover features a classy image of a tree with a lone enticing apple hanging from one of its branches. (Click the images below to enlarge.) 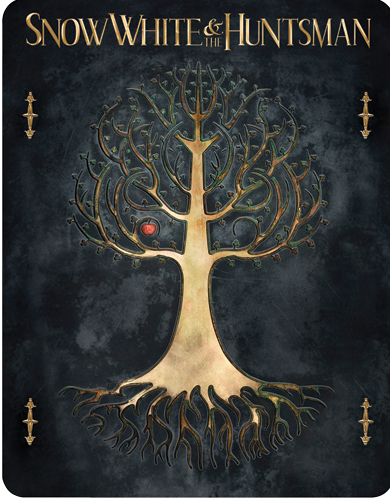 The back cover showcases Chris Hemsworth wielding an axe at the top, while Charlize Theron as the wicked sorceress queen is featured prominently in the center: 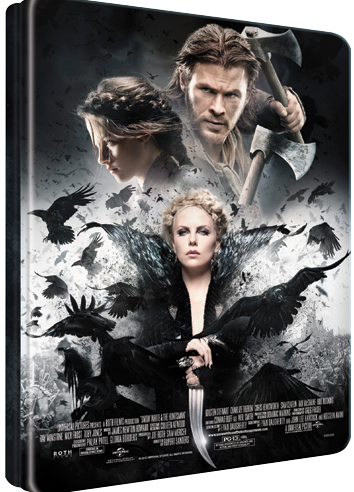 The inside has a nice double page spread of the castle amidst a murder of crows: 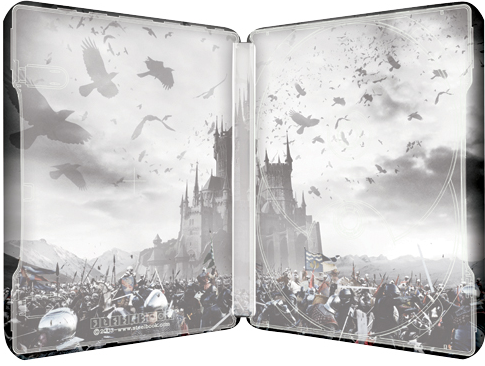 The Blu-rays will feature 1080p video and a DTS-HD Master Audio 5.1 soundtrack. Supplements will include an audio commentary and the ‘A New Legend Is Born’ featurette. Blu-ray exclusives include ‘Reinventing the Fairy Tale’, ‘Citizens of the Kingdom’, ‘The Magic of Snow White and the Huntsman’, ‘Around the Kingdom 360° Set Tour’, and Universal’s Second Screen.

The SteelBook for ‘Snow White and the Huntsman’ is currently $24.99 at Best Buy and can be pre-ordered here. Future Shop has it for the same price (in Canadian funds) here.