I feel like I’m in a World War II movie, and we’re all there together, battling in the trenches. We’re looking down at a fallen comrade, a man that we’d grown close to through countless patriotically-tinged montages. He’s gone. We’ll never hear his voice again. Gone forever. Someone whispers, “We lost a good man today.” We all nod in agreement.

Bob Hoskins announced his retirement from acting recently because he has been diagnosed with Parkinson’s disease.

We lost a good man.

There aren’t many actors like Hoskins. The closest that anyone comes to replicating his awe-inspiring career might be Gary Oldman. Both men are completely okay with being bit players in pictures featuring larger, more well-known actors. Both usually end up owning the movies that they’re in better than the aforementioned well-known actors. They’re both a joy to watch. 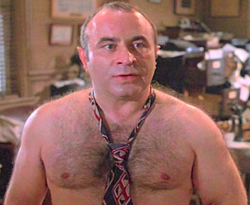 I remember the first time I saw ‘Who Framed Roger Rabbit’. I was amazed by two things. First was the audacity that the artists had in creating a cartoon character like Jessica Rabbit. I had no idea that cartoons could be sexy until that point. (I’d be lying if I said that there weren’t a few months there that I tried desperately to draw my own versions of Jessica Rabbit.) Secondly was the hair protruding from Bob Hoskins’ shoulders. It was grotesque, yet mesmerizing. There’s a scene in the movie where he removes his shirt, leaving only a tank top covering his stout middle. Atop his shoulders is a crop of shoulder hair that honestly seemed fake to me. I didn’t know people could have so much shoulder hair. How was it possible?

Shoulder hair aside, I found Hoskins to be a great actor. Even at that young age, I felt that he made acting with cartoons believable. It was a feat that, with today’s motion-capture technology, seems all the more amazing. Even rewatching ‘Roger Rabbit’ just a few weeks ago, I was still fascinated at how Hoskins seemed to really interact with the cartoon world. Yes, a lot of the credit goes to Robert Zemeckis’ direction, but Hoskins put it up there on screen and made it great fun to watch. 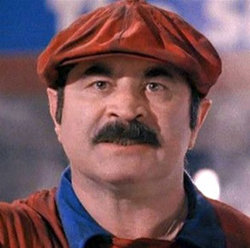 One of my favorite Hoskins films is ‘Unleashed‘. He makes a deliciously evil bad guy. He made my wife cringe the first time we watched it. She exclaimed that this couldn’t be dear old Smee dropping F-bombs and beating the crap out of anyone who crossed him. Yet, it was. That’s just another testament to Hoskins’ ability to inhabit any role.

There’s always something satisfying about watching a person who predominantly plays one type of role do something radically different. Hoskins as Bart in ‘Unleashed’ allowed him to really let loose and play a mean, vindictive asshole, and we still had to love him for it.

Even though I loved him in ‘Unleashed’ and a long list of other movies, Hoskins still made a few stinkers along the way, as he discussed in an interview with the English newspaper The Guardian:

Guardian: What is the worst job you’ve done?

Guardian: What has been your biggest disappointment?

Guardian: If you could edit your past, what would you change?

You have to admire the candidness in that exchange.

Now we find ourselves facing a future full of movies without Bob Hoskins. That’s a terrible thought indeed. Hoskins has starred in many of my childhood and adulthood favorites. He’s an actor who would routinely cause me to say: “Oh he’s in this? I had no idea.” That thought would usually be followed by: “Man, I’m glad he was in that movie. He was the best part.”

Here’s hoping that Mr. Hoskins will be able to manage his illness well, and be able to do the other things he has planned for his life. I’ll sure miss seeing him in movies.