Future Shop’s upcoming Blu-ray SteelBook for ‘The Amazing Spider-Man‘ isn’t exactly amazing, but at least it’s not as hideous as the Canadian retailer’s exclusive SteelBooks for Sam Raimi’s trilogy.

From the film’s synopsis:

‘The Amazing Spider-Man’ is the story of Peter Parker (Andrew Garfield), an outcast high schooler who was abandoned by his parents as a boy, leaving him to be raised by his Uncle Ben (Martin Sheen) and Aunt May (Sally Field). Like most teenagers, Peter is trying to figure out who he is and how he got to be the person he is today. When Peter discovers a mysterious briefcase that belonged to his father, he begins a quest to understand his parents’ disappearance – leading him directly to Oscorp and the lab of Dr. Curt Connors (Rhys Ifans), his father’s former partner. As Spider-Man is set on a collision course with Connors’ alter-ego, The Lizard, Peter will make life-altering choices to use his powers and shape his destiny to become a hero.

The artwork of the casing features a relatively plain image of Spider-Man scaling a building at night with a busy street below in the background. Click the image below to enlarge: 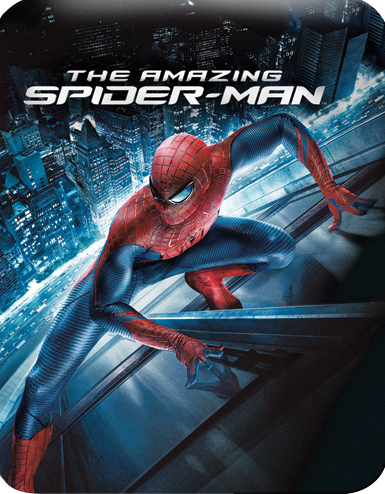 The Blu-ray/DVD/Digital Copy combo pack will feature 1080p video and a DTS-HD Master Audio 5.1 soundtrack. Supplements for this release will include:

The Blu-ray SteelBook for ‘The Amazing Spider-Man’ will be available on November 9th and can be pre-ordered at Future Shop (which doesn’t ship outside of Canada) currently for $34.99 CAD.