If you can’t make it to Rome or Venice anytime soon, check out Three Coins in the Fountain. It’s the next best thing to being there. This lightweight romance about the affairs of a trio of American expatriates living la dolce vita may seem shockingly sexist today, but the Italian scenery and historical sites maintain their timeless beauty.

Three Coins in the Fountain

Before the dawn of the jet age, overseas travel cost a pretty penny, making it a foray only the wealthy could afford. The rest of us had to rely on Hollywood to show us the sites, whether they be historic European capitals, exotic South Sea islands, or remote African outposts. Most of the time, movie studios would just recreate those places on their cavernous soundstages and use stock footage to fill in the atmospheric gaps. Occasionally, though, moguls would greenlight a location shoot for big-budget projects to really give viewers a you-are-there feel. The practice began in earnest in the early 1950s and really took off after the success of John Huston’s The African Queen.

Almost instantly, the travelogue film was born. The advent of CinemaScope, which offered sweeping panoramic views on a massive wide screen, made the genre an even more attractive commodity, both visually and financially. Such movies also helped lure audiences away from their televisions and back into theaters by offering something TV couldn’t – a gorgeous locale in brilliant color on a larger-than-life canvas. No one really cared if the films sacrificed meaty plots for local flavor. Stunning images and a cast of attractive actors kept audiences engaged and satisfied their feelings of wanderlust. After all, isn’t taking people to places they’ve never been and exposing them to different lands and cultures really what movies are all about?

Three Coins in the Fountain is the quintessential example of this type of frothy, escapist production. Its enormous success not only earned a Best Picture Oscar nomination, but also spawned countless copycat films. The blueprint is simple: Put three American women in a foreign location (in this case, Rome), follow them around as they visit all of the area’s iconic landmarks, give each a romance (preferably with a native), supply a few mild complications (but nothing dire enough to compete with or detract attention from the scenery and sights), and tie it all up with a requisite happy ending. Fairy tales rarely come so neatly packaged… and this one even features a bona fide prince!

Three Coins in the Fountain was the first CinemaScope picture to be shot overseas, and director Jean Negulesco maximizes every opportunity to showcase Italy’s scenic wonders. He instantly sets the tone with a lyrical, altogether captivating four-minute prologue that provides glorious glimpses of such famed Roman sites as the Fountain of the Naiads, the Fountain of Neptune, the Fountain of the Four Rivers, the spectacular waterscapes of Tivoli Gardens, and of course the iconic Trevi Fountain, all of which are underscored by the mellifluous vocals of Frank Sinatra, who silkily croons the movie’s Oscar-winning title tune. The scenes are so beautiful, I would have been happy watching just them for another hour and a half. When the opening credits finally roll, it’s kind of a letdown.

Thankfully, there’s much more to come. Shots of the Colosseum, Roman Forum, Capitoline Hill, and Spanish Steps, along with extensive side trips to Venice and the Roman countryside, provide consistently eye-popping backdrops to the movie’s anemic yet amiable story. (Milton Krasner won a well-deserved Oscar for his dazzling color cinematography.) Sadly, the price of all that breathtaking scenery is a clichéd tale that sets feminism back several decades and will make most women of today cringe.

All three female leads are secretaries, and none of them aspire to be anything else… except, of course, a wife. Two of them, Anita (Jean Peters) and new arrival Maria (Maggie McNamara), work at the U.S. Distribution Agency (whatever that is). The third, Frances (Dorothy McGuire), who’s a good decade older and flirting with spinster status, has spent the past 15 years doting over and pining after her priggish, prima donna boss, acclaimed author John Frederick Shadwell (Clifton Webb). Frances dutifully types his manuscripts and hovers over him like a mother hen, while he takes her completely for granted and hasn’t the faintest clue she’s desperately in love with him.

Anita and Frances show Maria the famed Trevi Fountain and tout the age-old legend that if you toss a coin into its bubbly waters, you will return to Rome one day. Maria obliges and Frances does too, but Anita, who’s planning to return to the States in a few days, demurs. Before she goes, Anita violates agency policy by going out with Giorgio (Rossano Brazzi), a hunky Italian office colleague. An attachment develops that winds up jeopardizing both Anita’s departure and Giorgio’s future. Meanwhile, the dapper, devil-may-care Prince Dino di Cessi (Louis Jourdan), a notorious womanizer, catches Maria’s eye at a party. She actively pursues him, risking her good-girl reputation and compromising her integrity in the process.

All the performances are competent, but there’s not enough drama to test anyone’s acting chops. Webb simply recycles his Waldo Lydecker character from Laura (wait, doesn’t he do that in every film he’s in?), Brazzi oozes Italian machismo (hardly a stretch), and Jourdan slathers on elegance and charm (who cares if he’s really French?). Among the women, McGuire is achingly sincere and maddeningly bland, but both Peters and McNamara inject Three Coins in the Fountain with just enough joie de vivre to sustain it. Interestingly, the Hollywood careers of both actresses wouldn’t last much longer. Peters would make only three more movies before marrying reclusive billionaire Howard Hughes and retiring from the screen, while McNamara, who made a splashy debut the previous year in Otto Preminger’s The Moon Is Blue, would make only one more film before her star burned out. Ironically, McNamara would support herself later in life as a typist and tragically commit suicide in 1978 after a long bout with acute depression at the age of 48.

Of course, the real star of Three Coins in the Fountain is Italy, and its timeless aura continually jumpstarts the film. Just when the story starts sputtering, another captivating vista or iconic monument reignites our interest and makes us anticipate the next stop on the tour. Is it really a surprise that no one in the cast can upstage or outshine such a seductive country? I think not. If you adore Italy (and who doesn’t?), it’s easy to forgive the archaic attitudes that pervade this fluffy romantic roundelay and bask in its bountiful and breathtaking beauty.

Rome, Venice, and the Italian countryside leap off the screen, thanks to the superb 1080p/AVC MPEG-4 transfer from Twilight Time, care of Fox. Three Coins in the Fountain was the first CinemaScope film to be shot outside the United States, but any technical challenges such an endeavor presented are invisible in this bright, vibrant, gloriously lush rendition, which is presented in the original aspect ratio of 2.55:1. A bit of distortion, akin to a slight fisheye, plagues the edges of the frame, but that’s a typical glitch of early CinemaScope. Faint grain preserves the integrity of Milton Krasner’s Oscar-winning cinematography, which fills the wide canvas with sumptuous color. Crystal blue skies, verdant greens, bold reds, and sunny yellows complement deep blacks and crisp whites to produce a stunning picture. Background elements are clear, patterns remain rock solid, day-for-night sequences look realistic, and no nicks, marks, or scratches mar the pristine print. The artifice of rear projection work occasionally disrupts the you-are-there feel, but never detracts from the breathtaking vistas on display.

Three audio options are available: DTS-HD Master Audio 5.1, DTS-HD Master Audio 4.0, and DTS-HD Master Audio 2.0. I watched the film with the 5.1 audio, and the results were quite pleasing. Though surround activity is practically nonexistent, very pronounced stereo separation across the front channels widens the soundscape to match the expansive CinemaScope image. In certain scenes, dialogue emanates from the left, center, and right speakers to match the location of the actors on screen. Solid bass frequencies provide occasional heft, while excellent fidelity and tonal depth boost the impact of Victor Young’s marvelously romantic score. Frank Sinatra’s crooning of the title song also sounds smooth and silky.

The only disc supplements are an audio commentary, a Fox Movietone newsreel clip that recaps the 1954 Oscar ceremony, an isolated score track, and the film’s original theatrical trailer. 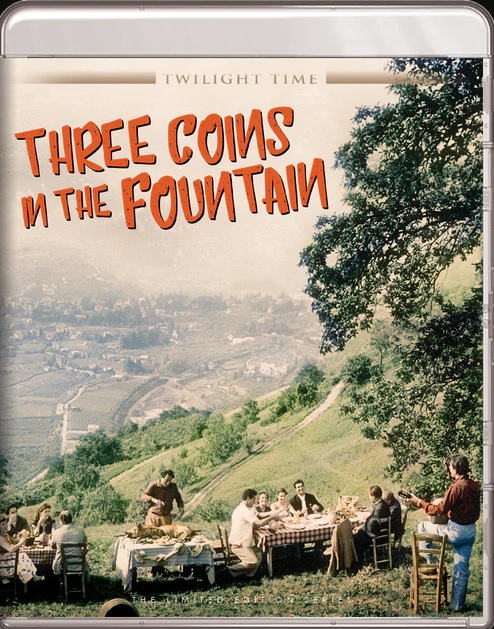