If you only see one Fred Astaire/Ginger Rogers movie, make it Swing Time. With memorable Jerome Kern standards, smooth direction by the great George Stevens, and a host of dazzling dance routines, this vintage musical remains forever young.

Fred Astaire and Ginger Rogers made nine classic movies together at RKO during the 1930s. All of them feature silly plots, sumptuous sets, toe-tapping tunes from the era’s most distinguished composers, and – oh yeah – some of the most breathtaking and perfectly executed dance routines ever burned onto celluloid. Although each film remains rightfully revered, Swing Time possesses one essential ingredient the other Astaire/Rogers musicals lack: director George Stevens. The man who would later helm such acclaimed dramas as A Place in the Sun, Shane, and Giant injects warmth and emotion into the Fred-and-Ginger formula, and imbues the featherweight material with a sophisticated artistry that helps make the movie arguably the duo’s best.

The lilting Jerome Kern score (with oh-so-clever lyrics by Dorothy Fields) contributes greatly to the film’s allure and success. The mix of witty duets (the incomparable “A Fine Romance”), bouncy dance tunes (“Pick Yourself Up”), and a killer ballad (the timeless, Oscar-winning “The Way You Look Tonight”) adds vital substance to the rather thin story of John “Lucky” Garnett (Astaire), the headliner of a second-rate touring show who plans to chuck his career so he can marry society girl Margaret Watson (Betty Furness). Such a rash move irks his fellow dancers, who don’t want Lucky to break up their act. Like any devoted band of brothers who only have the best interests of their buddy at heart, they make sure Lucky misses his wedding. His miffed fiancée and her enraged father dress down the repentant Lucky, who promises to buckle down, find a steady job, and gain some form of financial security before reclaiming Margaret’s hand.

Bereft of any funds (once again, thanks to his fellow hoofers, who pilfer all his cash), the down-on-his-luck Lucky and his devoted sidekick Pop (Victor Moore) hop the first freight train to New York. Minutes after their arrival, they bump into dance instructor Penny Carroll (Rogers) on the street. After a frosty introduction (it wouldn’t be a Fred-and-Ginger flick without one of those), the two strike up a rapport on the dance floor. A tentative romance ensues, which is complicated by Lucky’s serial gambling, some mildly deceitful behavior, and Penny’s jealous suitor, the bandleader Ricky Romero (Georges Metaxa). All’s well that ends well, of course, as dance proves to be the tonic that cures all ills.

Typical of every Astaire/Rogers film, the story is just a thinly disguised device to get the stars tapping, twirling, and gliding across impeccably waxed and gleaming parquet floors. (In a 1980 audio interview included on this disc, Rogers vividly describes just how treacherous those glossy, reflective floors were for a dancer.) Swing Time follows the blueprint, but Stevens meshes the dramatic and musical scenes so seamlessly that there’s never a break in the film’s flow. The songs don’t necessarily advance the story, but the Astaire/Rogers dances do, and as a result, their duets produce a palpable emotional impact often absent in their other pictures. Topping the list is the exquisitely performed “Never Gonna Dance,” an intricate, involving tour-de-force shot in just two lengthy takes. The lack of cuts allows us to become fully immersed in the awe-inspiring precision and perfection of Fred and Ginger, as they evoke feelings of love, loss, hopelessness, and despair. Not all dances can be classified as powerful, but this number – which reportedly took a whopping 47 takes to get right – earns the distinction. It left an exhausted Rogers with bleeding feet, but leaves a mesmerized audience breathless and dazzled.

As thrilling as “Never Gonna Dance” (at one time the film’s working title) may be, it’s only one in a series of showstoppers performed by the illustrious and iconic ballroom team. “Pick Yourself Up” stands as one of the duo’s most ebullient and easygoing routines, while the more formal but equally bright “Waltz in Swing Time” (amazingly shot in just one take) proves how comfortable Astaire and Rogers had become with each other after co-starring in five previous films.

Never again would the pair seem so unified, connected, and blissfully relaxed. Even in the two songs that don’t evolve into dances (“The Way You Look Tonight” and the deliciously sarcastic “A Fine Romance”), their chemistry is undeniable.

Astaire’s one solo number, “Bojangles of Harlem,” ranks as another of the film’s many highlights (despite its controversial nature), and marks the first time Fred employed special effects to enhance one of his dances. In this instance, he frenetically taps in front of a trio of blown-up shadows of himself that occasionally take on a life of their own, creating a striking image. Sadly, his blackface makeup adds an uncomfortable element to the sequence. Minstrel numbers may have been a 1930s musical staple, but that doesn’t make them any easier to watch today, even when they showcase someone as esteemed as Astaire. Adding insult to injury, the number doesn’t really salute dancer’s Bill Robinson’s inimitable style; it just exploits his name. Astaire, of course, does a bang-up job, performing with impeccable grace and style, but even his mesmerizing talent can’t overshadow the offensive imagery.

The supporting cast, led by the acid-tongued Helen Broderick, clumsy Victor Moore, and delectably droll Eric Blore, take care of comic relief, but when you’ve got Fred Astaire and Ginger Rogers tearing up the dance floor, who wants relief? Swing Time spotlights the team’s exquisite talent like no other film, and remains the high point of their peerless partnership.

Blu-ray has been around for more than a decade, so it’s kind of astounding that Swing Time marks the first Astaire/Rogers release in the format. Why it took so long to put Fred and Ginger in high-def remains a mystery, but I think I speak for countless classic film aficionados when I say that their long overdue Blu-ray debut is a welcome event indeed. Who better than Criterion to handle the remastering chores? I’m happy to report that this high-quality 1080p/AVC MPEG-4 transfer matches the class, style, and beauty of the iconic dance team. Presented here in its original 1.37:1 aspect ratio, Swing Time doesn’t look perfect, but no other home video version brings this delightful film so brilliantly to life.

According to the liner notes, the original camera negative for Swing Time “has long been lost.” Consequently, a new digital transfer was created in 2k resolution from two 35mm fine-grains and a 35mm duplicate negative. Such source issues may have deterred Warner (the studio that released the film on DVD many years ago) from upgrading Swing Time to Blu-ray, but thankfully Criterion has forged ahead. Grain is occasionally a bit thick and some stray nicks and marks appear off and on, but excellent contrast, clarity, and gray scale more than compensate for any visual anomalies. Deep black levels and bright whites balance the image, which exudes a distinct film-like feel, and background elements are easy to discern. Many of the close-ups, especially those of Rogers, look quite lovely.

The LPCM mono track is culled from a 35mm fine grain print and is free of any age-related surface noise. Astaire’s silky vocals sound great. The taps during the dance numbers are appropriately crisp, the orchestrations fill the room with ease, and all the snappy dialogue is easy to comprehend. Fidelity is limited, but that’s to be expected from a mid-1930s movie.

An array of superior supplements enhance the disc, beginning with an astute and involving 1986 commentary by John Mueller, author of the immensely rewarding tome Astaire Dancing. There are also enlightening archival interviews with Astaire, Rogers, and choreographer Hermes Pan (the audio interview with Rogers is especially worthwhile and highly recommended), as well as a 2019 interview with George Stevens, Jr., a 40-minute appreciation of Swing Time produced expressly for this Criterion edition, and an insightful and incisive 2019 analysis of the now-controversial “Bojangles of Harlem” number that includes a history of blackface and minstrel shows. Finally, a 12-page foldout booklet featuring an essay by film historian Imogen Sara Smith, full-page black-and-white photos of Astaire and Rogers, a cast and crew listing, and transfer notes is tucked inside the front cover of the case. 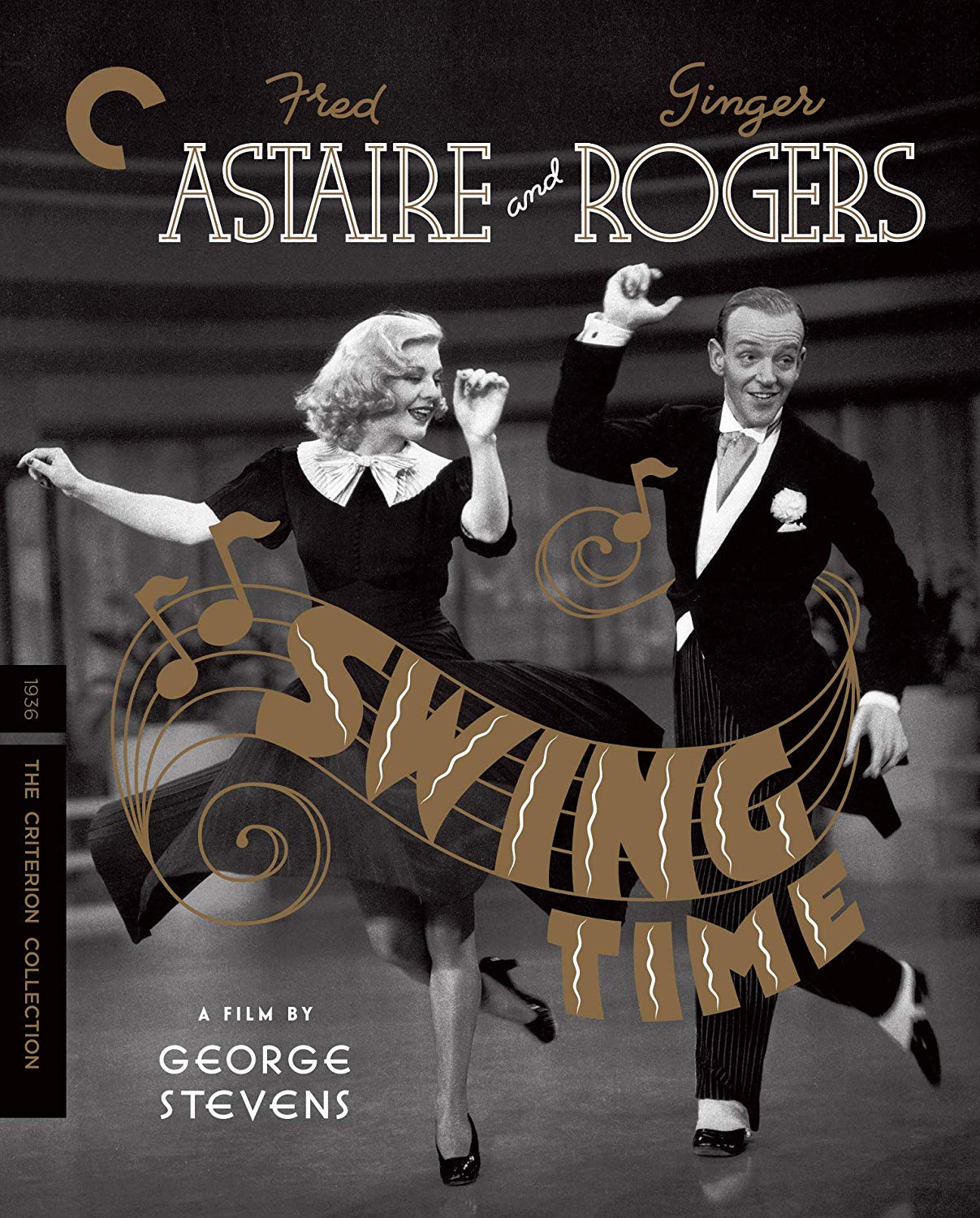