I just finished watching the acclaimed F/X limited series Fosse/Verdon, which I thoroughly enjoyed and highly recommend. The seven-episode TV bio-pic features a spectacular, Emmy-nominated turn by Michelle Williams, who uncannily evokes legendary dancer Gwen Verdon over the course of thirty-plus years. Though I can’t imagine any performer channeling Verdon better than Williams, Shirley MacLaine sure tries her damnedest in the screen adaptation of Sweet Charity. The bubbly Verdon, who originated such iconic musical comedy heroines as Lola in Damn Yankees and Roxie Hart in Chicago, nabbed a 1966 Tony Award nomination for her portrayal of Charity Hope Valentine, an optimistic, romantic hooker forever pining for Prince Charming. Yet by the time the film version of Sweet Charity rolled around three years later, youth-obsessed Hollywood deemed the 43-year-old actress too old to recreate one of her signature roles (though it readily allowed her Broadway co-star, 40-year-old John McMartin, to recreate his). As a result, the more marketable, decade-younger MacLaine was cast instead.

Verdon was married to the movie’s director and choreographer, Bob Fosse, who audaciously asked his cast-off leading lady to coach her replacement in the part. (Talk about nerve!) Ever the trouper, Verdon agreed, and the result is the second-best on-screen imitation of Verdon in entertainment history. With her red hair, lanky physique, boundless effervescence, and tip-top terpsichorean talent, MacLaine does Verdon proud, filing a performance that bursts with so much warmth, brassiness, and razzle-dazzle, it almost saves the film.

Don’t get me wrong. There’s a lot to like about Sweet Charity, most notably Fosse’s energetic, chic, and oh-so-inimitable choreography, which is danced not only by MacLaine, but also the electric Chita Rivera and Sammy Davis, Jr. (whose cameo is both dazzling and pointless). There’s also the top-notch Cy Coleman/Dorothy Fields score that includes such standouts as “Big Spender,” “If My Friends Could See Me Now,” “Where Am I Going?,” and “There’s Gotta Be Something Better Than This.” An eye-popping array of outrageous 1960s fashions designed by Edith Head stoke the senses, as do several splashy sets, a cavalcade of New York City locations (Central Park, Wall Street, Lincoln Center, the Brooklyn Bridge, and Yankee Stadium, to name but a few), and a host of winning performances. Somehow, unfortunately, the sum of these very attractive parts never quite adds up to a satisfying whole.

Timing may well have sabotaged Sweet Charity when it premiered just over 50 years ago. Though the early 1960s produced a trio of Broadway stage adaptations (West Side Story, My Fair Lady, and The Sound of Music) that swept the Oscars and broke box office records, the late ’60s saw movie musicals fall out of favor. Elephantine productions like Doctor Dolittle, Paint Your Wagon, Goodbye, Mr. Chips, Star!, and yes, Sweet Charity laid massive eggs and sounded the death knell for film musicals for decades to come.

Sweet Charity may have gotten swept up in a tidal wave of flops, but like those other big-budget fiascos, it’s a victim of its own excess. Too long, too overblown, and too self-absorbed, the film often ignores the critical modifying adjective in its title. There’s very little sweet in Sweet Charity, despite a script that closely follows Neil Simon’s original book, which itself is based on the 1957 Fellini film The Nights of Cabiria. The simple story chronicles “the adventures of a girl who wanted to be loved,” but in this case the trimmings often overwhelm the tale. (It’s hard to out-Fellini Fellini, but Fosse finds a way.)

Charity works as a “taxi dancer” (Hollywood euphemism for prostitute) at a dingy Manhattan club, but after years of falling in love with all the wrong guys, the quintessential hooker with a heart of gold realizes that she has to change her dead-end life if she ever intends to meet Mr. Right. Following a disastrous interview at an employment agency that exposes her utter ineptitude, Charity gets stuck in an elevator with Oscar (McMartin), a nervous, uptight, upstanding “goofball” who quickly falls under her spell. A tentative romance develops, but as the prospect of marriage looms ever larger, Charity fears her checkered past may thwart her dreams of a happily ever after.

That’s not a lot of plot for a two-and-a-half-hour movie. Though much of the action is buoyant and charming – and buffeted by an array of flashy numbers – the story could be told much more economically. (Does this frothy yarn really need to be broken up by an intermission, as if it were a two-part TV sitcom episode? I think not.) Sweet Charity marked Fosse’s first foray into film direction, and while his eagerness to make his mark and fashion a bold new style of moviemaking (just like he fashioned a bold new style of choreography years before) is admirable, the resulting smorgasbord of tricks and gimmicks – countless freeze-frames, montages composed of still shots, bizarre tinting, and too many rapid cuts and quick zooms – disrupts the picture’s flow. Three years later, Fosse would refine his execution and win a Best Director Oscar for Cabaret, but his freshman effort betrays his inexperience… and ego. Like many cocky novices, he’s chock full of ideas and innovation, but unsure of how to best funnel his creative energy.

Of course, any Fosse musical is ultimately defined by its dance numbers, and in this vital department, Sweet Charity doesn’t disappoint. The most famous routine begins with that forever familiar syncopated brass and drum intro, “Bum-bum-bah-dum-bah-dah.” The lyrics are instantly identifiable, too: “The minute you walked in the joint, I could see you were a man of distinction, a real big spender. Good lookin’, so refined. Say, wouldn’t you like to know what’s goin’ on in my mind? So let me get right to the point. I don’t pop my cork for every guy I see. Hey, big spender! Spend a little time with me.” Chita Rivera (in her film debut), Paula Kelly, and a bevy of bodacious bombshells strike innumerable Fosse-esque poses in arguably the most potent musical come-on in Hollywood history.

That number is worth the price of the disc, but doesn’t even feature MacLaine. Her time to shine comes a little later with a sparkling rendition of “If My Friends Could See Me Now.”

That’s followed by the finest dance number in the film, “There’s Gotta Be Something Better Than This,” in which she joins Rivera and Kelly for a spirited exercise that celebrates the indomitable feminine will.

Another Fosse favorite, Ben Vereen, also makes his cinematic bow in Sweet Charity, strutting his considerable stuff next to Sammy Davis, Jr. in the revival-tinged “The Rhythm of Life.” The three-part “Rich Man’s Frug” is a Fosse tour de force that perfectly skewers the far-out mod vibe that defined the late 1960s, but the close-to-ten-minute sequence is better viewed as its own mini movie than as part of Sweet Charity because it stops the action cold.

That happens a lot in this film. Fosse’s brilliance is everywhere, but it’s so unfocused and slapdash, it’s better digested in small doses. I could watch the movie’s musical numbers all day, but when they’re stitched into the meandering narrative, they overwhelm and bog down the movie. Couple all that with a melancholy ending that strikes the proper tone but isn’t especially satisfying (a more upbeat but equally unsatisfying ending was also filmed and can be viewed on the Alternate Edition disc in this set), and you’ve got a musical behemoth that, like its heroine, just doesn’t know when to quit.

Like its director, Sweet Charity seems to run on Benzedrine. It’s exhausting, frenetic, dull, and dazzling all at the same time. In short, it’s a magnificent and maddening mess.

This two-disc set includes both the 151-minute Roadshow edition of Sweet Charity and a 145-minute alternate edition. The alternate version lacks the overture and entr’acte music, but provides an alternate ending that gives Charity the fairy tale denouement she craves. Many viewers also might prefer this far more upbeat, if improbable, ending that Fosse reportedly shot as a safety net in case studio executives balked at the show’s more realistic, bittersweet finish. Thankfully, all involved recognized the merits of the original ending, which goes against the grain of traditional musical comedy, but suits the material, honors the character, and reflects contemporary 1960s culture. The bad news is it lands with a big thud and takes the wind out of the picture’s sails.

The packaging heralds brand new 4K restorations of both versions. Sometimes restorations don’t meet expectations, but that’s not the case here! Kino’s scrumptious 1080p/AVC MPEG-4 transfer, presented in the original 35mm aspect ratio of 2.35:1 (Sweet Charity was also released in 70mm at an aspect ratio of 2.20:1) more than lives up to the hype, thanks to exceptional contrast and clarity, gorgeously saturated color, and a spotless source print that makes this 50-year-old musical look like it was produced yesterday. Grain is faint and well resolved, but the image never appears anything less than film-like. Close-ups exude plenty of fine detail, background elements are sharp, depth is palpable, and deep black levels nicely balance all the vibrant hues. Though the story drags a bit, I never tired of looking at this so-luscious-you-could-eat-it-with-a-spoon transfer that continually energizes an already vivacious musical.

Both DTS-HD Master Audio 5.1 and 2.0 tracks are available. I watched the film with the 5.1 track, which provides a modest surround feel during the musical numbers, but no real multi-channel effects. Stereo separation up front, however, is quite distinct at times. Although the track required a bit more of a volume boost on my system than I’m accustomed to, all the location atmospherics, dialogue, and song lyrics come through clearly. Cry Coleman’s Oscar-nominated musical score sounds rich and full, and no age-related hiss, pops, or crackle disrupt the on-screen action.

Kino goes the extra mile with this two-disc set, including an attractive, Twilight Time-like eight-page booklet that includes an essay by stalwart Twilight Time writer Julie Kirgo, a collection of production, scene, and publicity stills, and a cast and crew listing. A couple of interesting vintage featurettes spotlighting Bob Fosse’s direction and choreography and Edith Head’s Oscar-nominated costumes, as well as the film’s original theatrical trailer, are included on the Roadshow Edition disc, while an audio commentary by film historian Kat Ellinger graces the Alternate Edition disc. There’s also reversible cover art on the packaging, featuring an avant-garde, Fosse-esque alternative to the more traditional poster art. 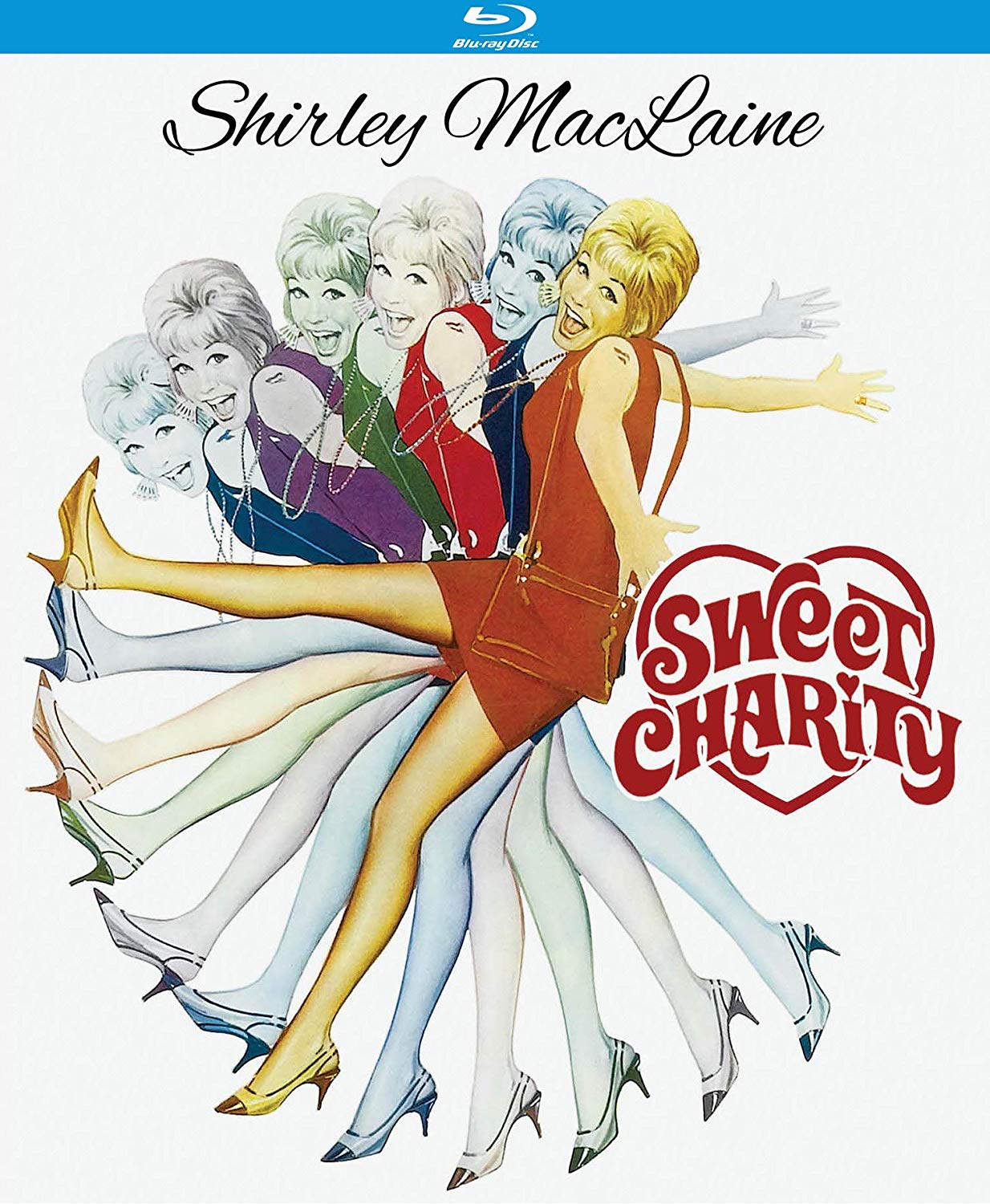