The Last Movie almost was the last movie for Dennis Hopper. As much as Easy Rider set him up to be a powerhouse director, his follow-up was a notorious fiasco that nearly destroyed Hopper’s career. Little-seen for decades, the film eventually resurfaced in 2018, begging for re-evaluation.

For a brief moment, Easy Rider made Dennis Hopper a counterculture hero and the face of American independent filmmaking. Not really understanding what this “New Hollywood” business was all about but impressed with the money rolling in, the studio heads at Universal were eager to associate themselves with anyone responsible for such a blockbuster hit. They offered Hopper full artistic control on any project he wanted, and acquiesced when he rounded up a big production filled with many of his friends and dragged them all down to Peru, well out of sight from the prying eyes of those holding the purse strings.

Hopper had very ambitious plans for The Last Movie, which was to be not just a movie itself, but a movie about making movies and the blurring line between fantasy and reality. While he certainly wasn’t the first person to tackle that subject (nor the last), his particular point of view on it was fueled by copious amounts of cocaine, hallucinogens, and other illicit substances that no doubt convinced him that he was making not just a masterpiece, but the most important motion picture of all time. 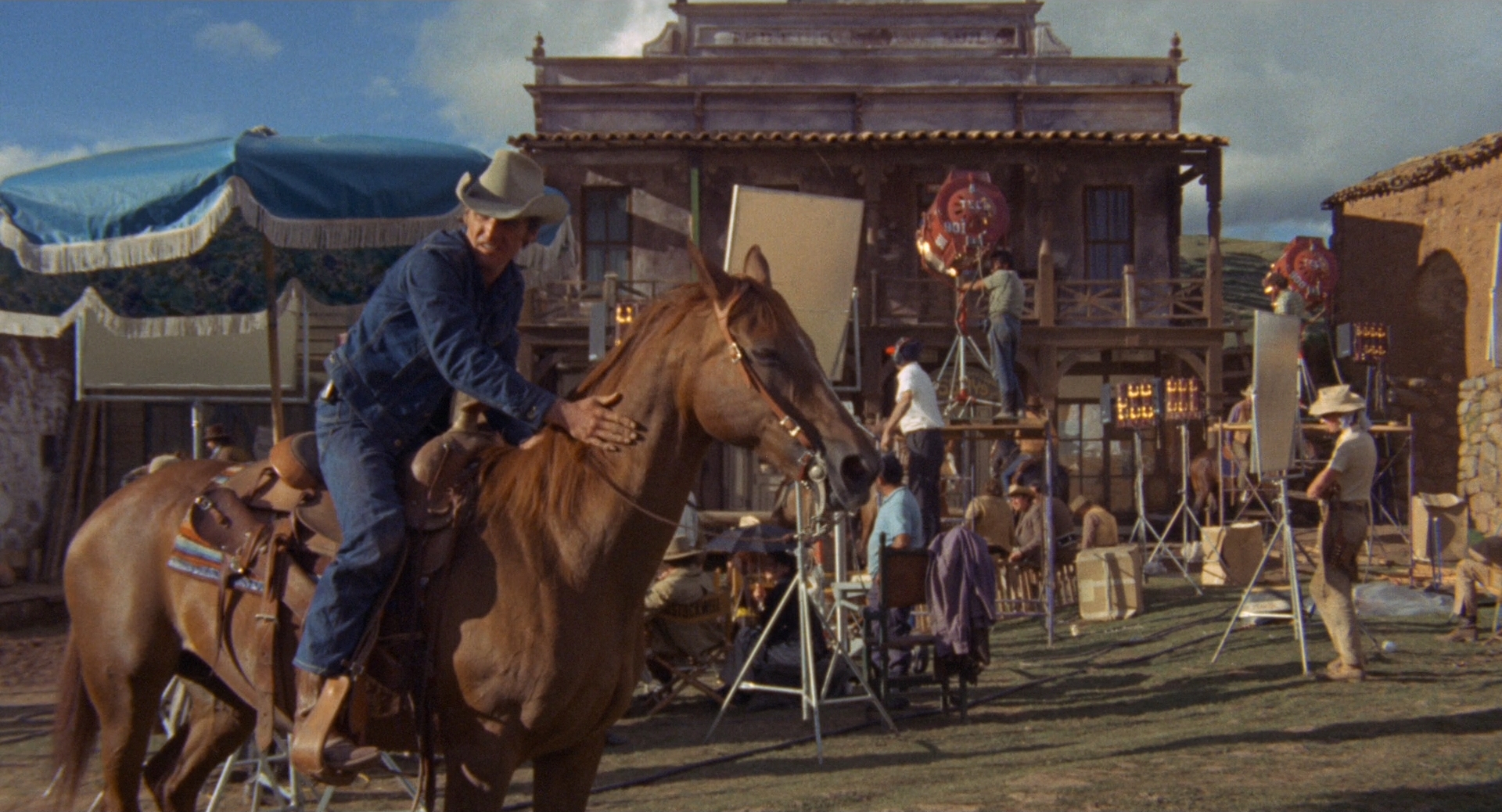 As far as the plot can be decoded, Hopper stars as Kansas, a Hollywood stuntman and horse wrangler who traveled to Peru as part of a film crew making a Western helmed by the legendarily bombastic Samuel Fuller (playing himself). The shoot completely takes over a small village in the Andes called Chinchero, much to the confusion of many of the naïve indigenous people who have little concept of what a movie is. As some of the locals begin imitating the events they see being filmed (fighting, shootings, etc.), but doing them for real, the village priest worries that the intrusion of American culture may have corrupted their souls.

Kansas falls in love with a local woman and stays behind after the production wraps up and heads home. However, his dreams of a bucolic life begin to crack when he starts palling around with a family of obnoxious American ex-pats. The wife (former Creature from the Black Lagoon babe Julie Adams) shamelessly flirts with and seduces Kansas right in front of both his girlfriend Maria and her own husband. As he spends time trying to impress his wealthy new friends, Kansas’ drinking spirals out of control and his behavior grows erratic and violent.

Meanwhile, even with no real film crew around anymore, a group of villagers continue making the movie, using homemade “cameras” and “microphones” cobbled together from bamboo sticks, as if a permanent movie shoot were their new reality and way of life. The drunken and disillusioned Kansas gets wrapped up in this madness, to the point of losing track of what’s real and what’s intended to be “fun.” 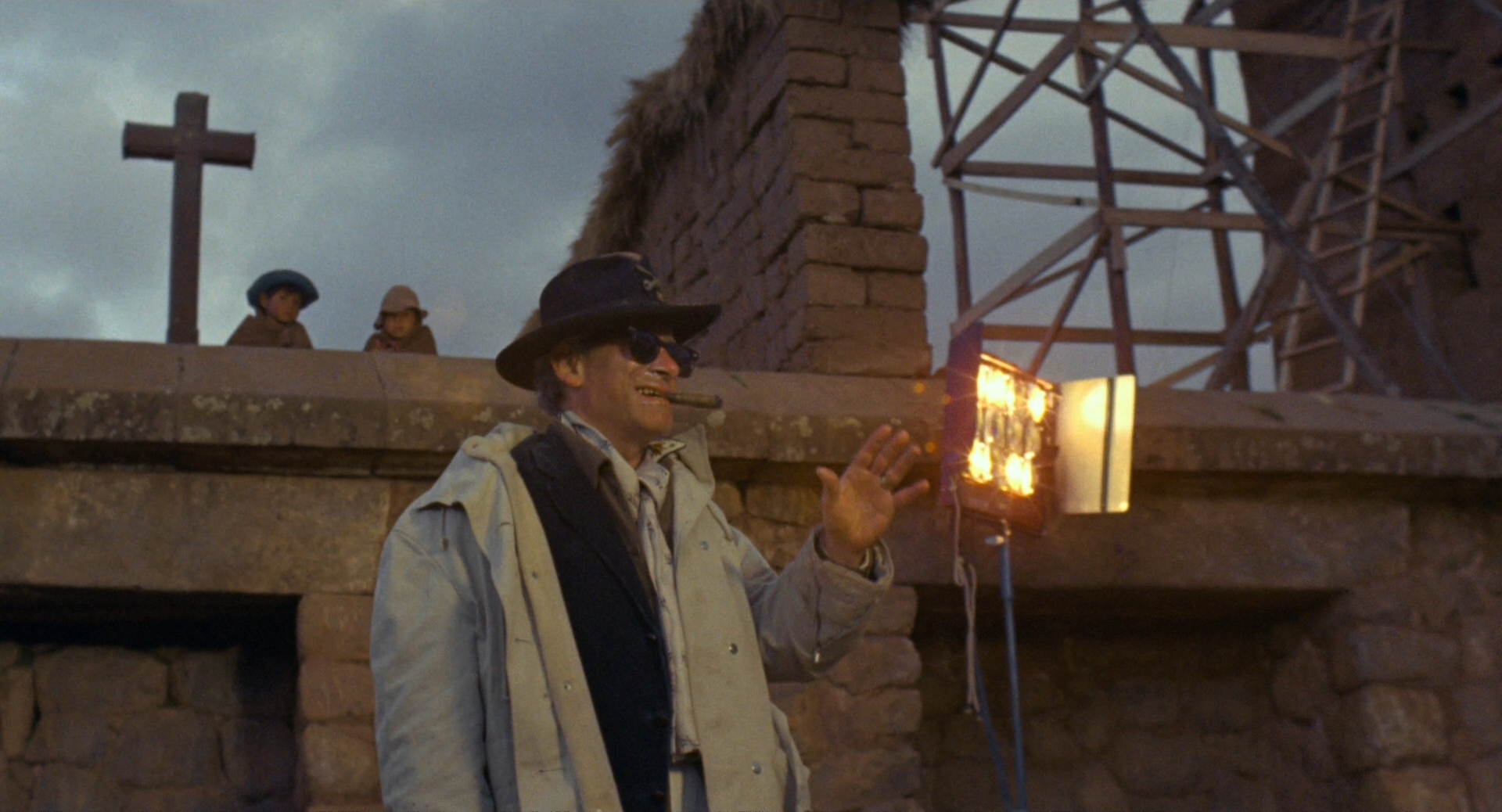 Much as he had in Easy Rider, Hopper tells this story in a very meandering fashion. Long stretches of film go by where not much happens except allowing the characters to roam around in their environment. The difference in this case is that the characters are less likable or appealing. Kansas is borderline catatonic for much of the movie. Our sympathies for him deteriorate when he treats Maria badly and beats her for no reason at all. Even Maria herself doesn’t come across much better; she becomes very shallow and materialistic as Gringo values rub off on her.

As director, Hopper uses filmmaking techniques that admirers might liken to abstract art but could less charitably be called amateurish (shaky zooms, choppy editing, even a couple of sections marked “Scene Missing”). Ultimately, the narrative of The Last Movie breaks down into an incomprehensible muddle of delusions and fourth-wall-breaking and possibly some genuine behind-the-scenes footage. To be fair, that’s all probably appropriate for the themes Hopper wanted to explore, even if little of it makes sense on a first viewing, if ever. 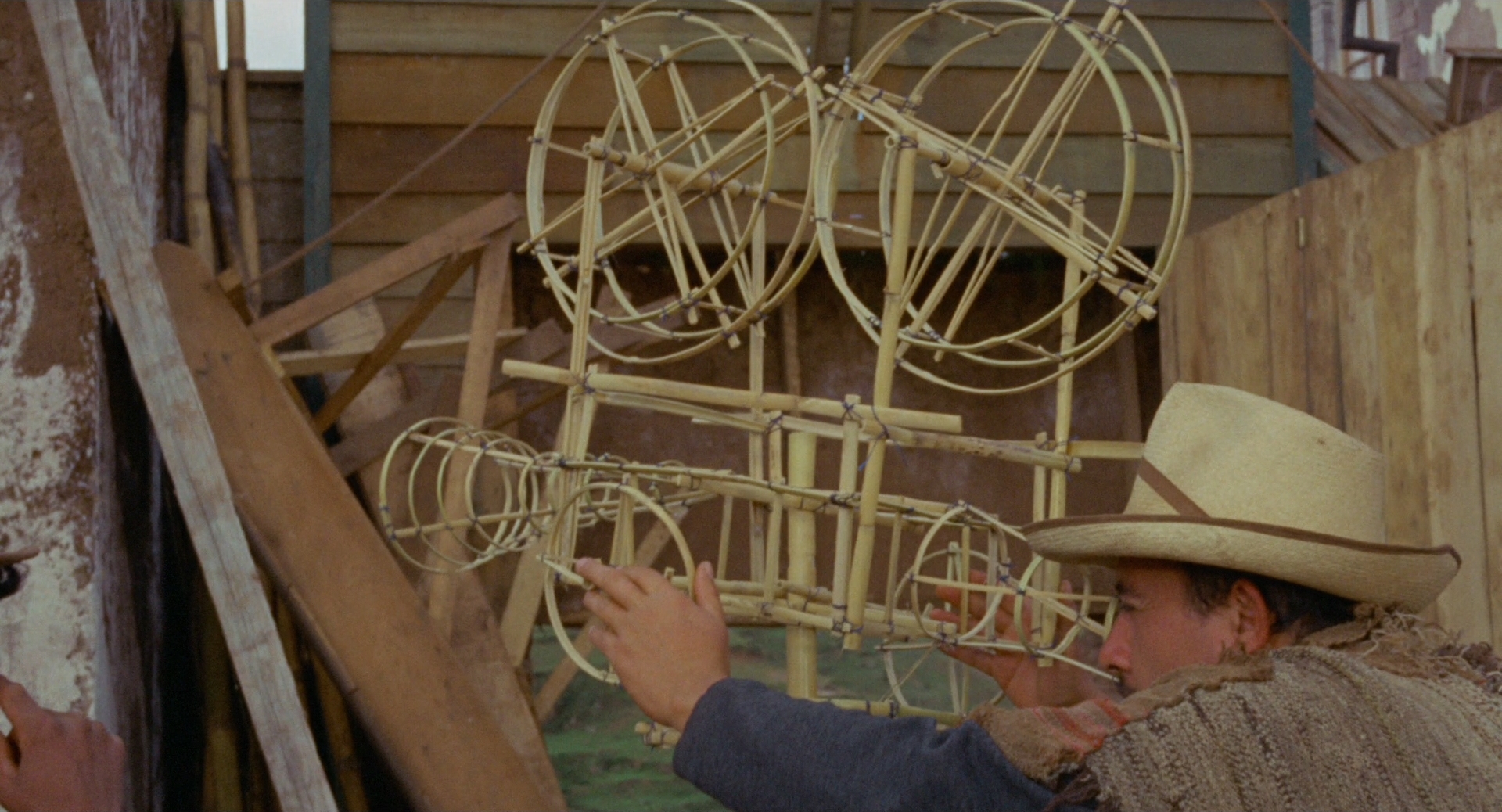 In both the text of the film itself and the details of how it was made, The Last Movie is a classic 1970s case study of not-entirely-sober artists traveling to a foreign country to make a movie and losing their minds in the process. With everyone under the influence of potent uncut drugs and the thin mountain air, the production was very tumultuous. Stories, whether true or not, circulated about Hopper behaving like an out-of-control madman on set. His producers from the studio had no idea how to manage either the director or the situation. After filming concluded, Hopper returned home to the United States with more than forty hours of mostly-improvisational footage, and locked himself away for more than a year to edit the picture, refusing to let his bosses see it.

The Last Movie premiered at the Venice Film Festival in 1971 to some acclaim and even picked up an award there, but the execs from Universal were baffled by the film and demanded that Hopper recut it. When he refused, they almost entirely canceled its theatrical release, allowing it to play for barely a week in New York and Los Angeles before pulling it from circulation. The few American critics who saw it didn’t respond much better.

For years, The Last Movie was regarded as an infamous disaster. People who’d never seen the film only knew of it as a cautionary tale of drug-addled artistic excess. Once the shining hope of a new generation of filmmakers, Hopper’s reputation turned toxic and he became virtually unemployable for a time. Aside from a couple of notable acting performances in The American Friend and Apocalypse Now, his career wouldn’t really resuscitate until he sobered up in the mid 1980s. By the time he returned to directing, his movies (such as Colors) were much safer and more mainstream accessible, albeit no doubt better for his employability and personal finances.

Hopper’s failed passion project lingered in obscurity for decades. To my knowledge, it never received an official home video release until 2018, eight years after its director’s death. Now cleaned-up and given nearly five decades of distance from all the baggage that surrounded its creation, the film can finally be judged on its own terms. To that end, it’s not nearly the debacle it had been painted as. In fact, it’s a thematically rich, experimental, and often fascinating work. Nevertheless, The Last Movie is still perhaps more interesting in conception than in execution. Its sloppiness and incoherency will remain impediments to greater acceptance. 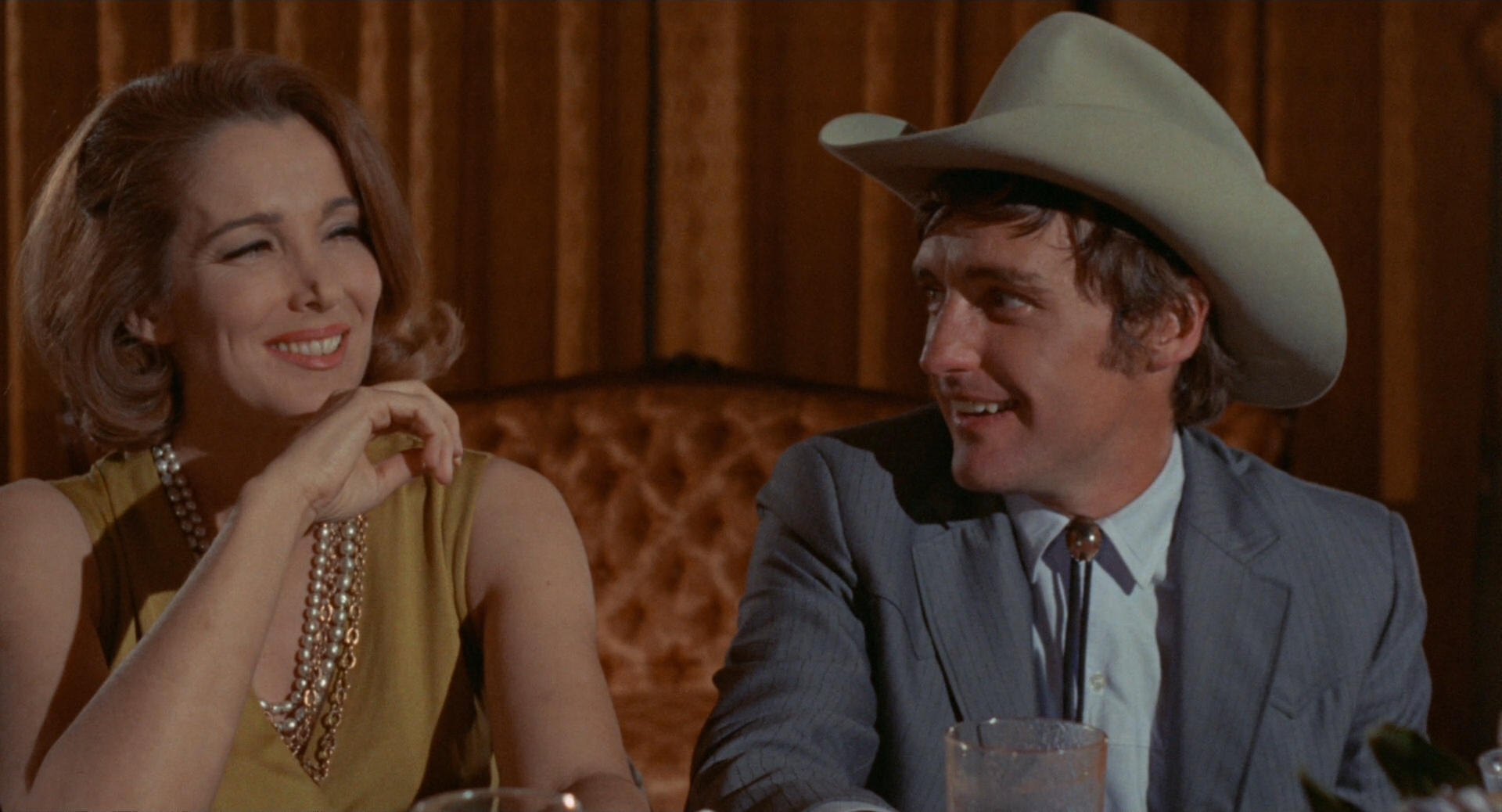 Long unavailable to the public, The Last Movie was scanned at 4k resolution by L’Immagine Ritrovata in Italy and restored by Arbelos Films for a Blu-ray release in late 2018. A before-and-after comparison on the disc shows the faded and miscolored condition of the film elements before the restoration. Needless to say, the final result looks much better. The cinematography by László Kovács is fairly soft and grainy on the whole, but detail in the 1.85:1 image is decent most of the time. Colors are a little muted, and the contrast seems overly flat with raised black levels, but it’s hard to judge the original intent. The scenery has some vibrant green grass that looks nice.

The soundtrack is provided in DTS-HD Master Audio 2.0 mono format. The sound quality is somewhat thin with weak gunshots, but this isn’t exactly a slam-bang action movie. More concerning is that some of the dialogue is hard to hear, but that can probably be chalked up to the original recording.

Extras include a brief director’s intro recorded in 2007, a very informative documentary, some featurettes, vintage clips (including a segment from The Dick Cavett Show), trailers, and other errata such as the restoration demo mentioned earlier. The booklet in the case also has a few useful essays. 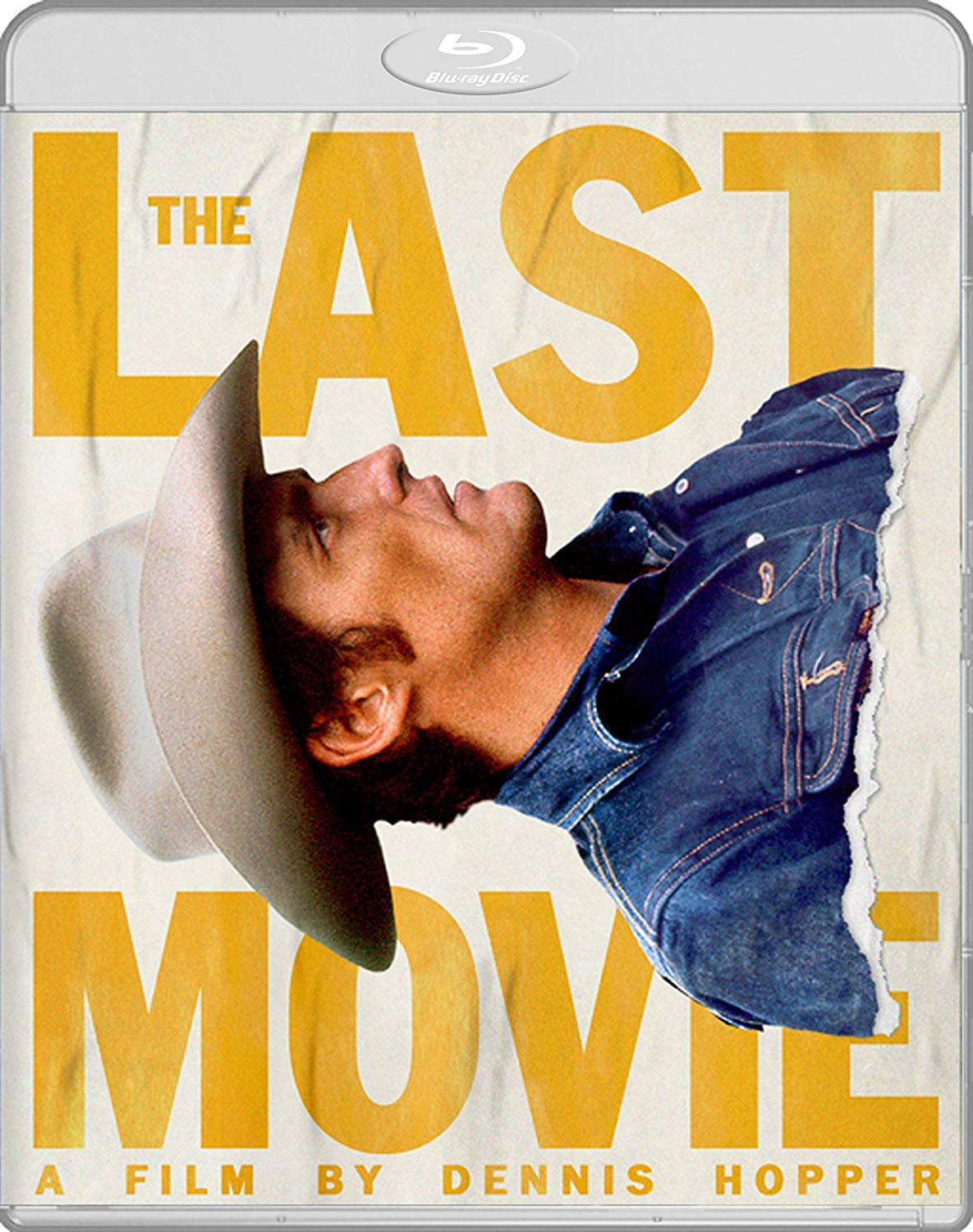 The Last Movie – Buy the Blu-ray at Amazon