Flesh-and-blood characters, fine writing, and sensitive performances distinguish Baby the Rain Must Fall, a haunting character study from writer Horton Foote and director Robert Mulligan. Though its slow pace, lack of plot, and subtle shadings might test your patience, this finely crafted, underrated film delivers on many levels.

Baby the Rain Must Fall

Writer Horton Foote specializes in slice-of-life stories chronicling the daily struggles of plain Southern folk. Most are straightforward, uncomplicated tales that never possess a definite beginning or end. They often start in the middle and end there too, leaving plenty of dangling threads for readers and viewers to contemplate. Plots don’t seem to matter much to Foote; for him, it’s the characters that count, and over the course of a half-century career he crafted a gallery of memorable figures. (Carrie Watts in The Trip to Bountiful and Mac Sledge in Tender Mercies are perhaps his two most famous creations.) All speak a simple language, and watching them interact, evolve, and struggle with everyday problems is almost always a rewarding experience.

In Baby the Rain Must Fall, Foote employs his patented style once again, this time in an adaptation of his play, The Traveling Lady. Subtle, sparse, and quietly moving, this low-key and often overlooked drama possesses a lovely flow and mood that keep us riveted throughout, despite its deliberate pacing and minimal plot. Director Robert Mulligan strikes just the right tone, and never tries to over-tell the story. With lyricism and restraint, he brings Foote’s drama to life, and, just like he did a few years earlier with To Kill a Mockingbird (which Foote also adapted), masterfully blurs the lines between cinema and literature.

We first meet Georgette Thomas (Lee Remick) and her adorable little daughter Margaret Rose (Kimberly Block) as they travel on a bus toward the sleepy town of Columbus, Texas. Notified that her husband, Henry (Steve McQueen), who was convicted of killing a man in a barroom brawl a few years earlier, has received parole, Georgette plans to rekindle their relationship and introduce him to the daughter he has never seen. The family reunion is understandably stilted and awkward, but Henry and Georgette try to forge a life together.

Georgette, however, must compete for her husband’s affection. Music is Henry’s first and strongest love. He finds himself torn between his aching desire to pursue a career as a rockabilly singer/songwriter and his burgeoning domestic responsibilities. Georgette fully supports Henry’s dream, but convincing the crotchety, domineering Miss Kate, Henry’s abusive adoptive mother, is an impossible task. Miss Kate made Henry promise to enroll in night school and learn a trade as a condition of his parole, but Henry only feels alive when he’s performing and can’t resist the allure of the stage.

The wounds Miss Kate inflicted on the young Henry have never fully healed, and his hatred and fear of the bitter old woman often clouds his judgment. A violent temper and penchant for liquor also conspire to sabotage Henry’s precious, but oh-so-tenuous new life. Georgette tries her best to be a steadying influence, and Henry’s childhood pal Slim (Don Murray), now the town’s deputy sheriff, does what he can to keep his friend on the straight and narrow, but both have trouble stemming Henry’s volatile tendencies and soothing his childhood scars.

Life in a sleepy, judgmental Southern town is well-worn territory for Mulligan and Foote, and their experience shows. Few details escape their gaze as they meticulously depict the wind-swept atmosphere and uptight attitudes of rural Texas. Mulligan weaves an intimate spell and rarely breaks it, allowing viewers to feel an affinity with Georgette and Henry that lasts throughout the film. Yet like the characters it depicts, Baby the Rain Must Fall stumbles at times. Sketchy details and questionable motivations occasionally cloud the action, and McQueen – whose character performs three songs, including the infectious title tune – can’t lip-sync to save his soul. Luckily, the literate screenplay, sensitive direction, and impeccable performances make it easy to forgive any faults.

Remick and McQueen act with such natural and heartbreaking grace it’s impossible not to identify on some level with their characters. Both contribute mesmerizing portrayals brimming with realism and truth. Remick underplays to perfection and exhibits a serenity and purity of spirit that add even more radiance to her classic beauty. She fills her tender, marvelously shaded performance with deep emotion and deceptive strength, and her bright outlook in the face of considerable turmoil and uncertainty is inspirational.

McQueen, however, is the real surprise. His eyes and posture brilliantly convey Henry’s inner conflicts and neuroses, while his quiet intensity adds wrenching layers to Henry’s desperate ambition, unrealistic dreams, and divided loyalties. This is a different Steve McQueen – gentle, vulnerable, tortured, but still tough and manly – and his admirable work only makes one wish he pursued similar roles more often. Here, he flexes some impressive dramatic muscle, and, together with Remick, molds Baby the Rain Must Fall into a memorable and moving film.

Twilight Time presents Baby the Rain Must Fall in its original aspect ratio of 1.85:1. The 1080p/AVC MPEG-4 transfer, care of Sony, is a nice upgrade from the 2004 DVD. Though a fair amount of print damage afflicts the opening title sequence, once the narrative begins the source material is largely free of any nicks or marks. Grain is evident but well resolved, preserving the integrity of Ernest Laszlo’s naturalistic cinematography that brings the arid, dusty, wind-swept setting to brilliant life. Blacks are lush, whites occasionally run hot, and the grays in between flaunt enough variance to supply a palpable sense of depth. Transitions can be a bit rough and a few scenes appear slightly soft or overly bright, but close-ups crackle with clarity, emphasizing McQueen’s ruggedness and Remick’s fresh-faced beauty.

In addition to an eight-page booklet that includes an essay by film historian Julie Kirgo, a few scene stills, and a color reproduction of the movie’s poster art, the only supplement is the original theatrical trailer. Like all Twilight Time releases, this is a limited edition disc of 3,000 copies. 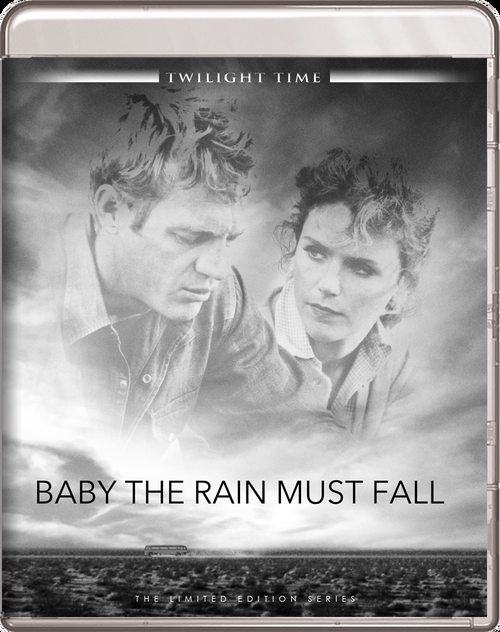