For this week’s Roundtable, we’re taking a break from our usual movie list discussions. We’re going to shift gears a little bit and talk about something more personal. Most home theater owners like to decorate their HT rooms with posters, memorabilia, knickknacks, and other interesting odds and ends to celebrate their favorite movies, TV shows, and pop culture happenings. Let’s take a look at some of our personal favorites.

We also have a special guest blogger this week. Adam Tyner from our sister site DVDTalk will be joining us to weigh in.

So, let’s get going.

I’ve got to say that I’m pretty impressed with my own collection of movie-related junk. I’ve got posters from around the world, including an Italian ‘Psycho’ one-sheet, Belgian ‘Taxi Driver’ and ‘Written on the Wind’ minis, and some ‘Christine’ lobby cards from the good ole U.S. of A. that I’ve handily framed in chrome silver. I have a soundtrack album from Brian De Palma’s masterpiece ‘Phantom of the Paradise’ that I framed. I even have some props from ‘The Curse of the Jade Scorpion’ and ‘Men in Black II.’ (Where those came from is another story altogether).

But the one item that I would probably grab first if my house was on fire and I only had a few choice seconds to decide the fate of my precious valuables is my Teddy bear from Steven Spielberg’s ‘A.I.‘ The toy manufacturers probably thought the movie was going to be a big commercial hit. (It’s a Steven Spielberg movie about robots, after all.) But word probably reached them swiftly that this was a relentlessly bleak sci-fi epic, not a cuddly kids’ movie. Still, some Teddy bears did reach the market. I’m not sure how many got out there, but I have a feeling that the collectible will one day have an air of that “Boba Fett that fires real missiles” mystique. (A quick eBay search pulled up one going for $200.) However, it’s not the rarity or the coolness of the toy that would make me save it first. It’s because, when you squeeze its tummy, it mutters things in that gruff, chain-smoky voice. And, really, while a lot of my art and collectibles are nifty, Teddy is the only one that’s really cute.

I don’t collect things, as a rule. I have a modest selection of Blu-ray discs, a decent stock of videogames and a bit of game art on my wall, but I’m not the guy who holds onto all his old stuff just for the sake of holding onto it. I keep it while I’m using it and unload it when I’m not. 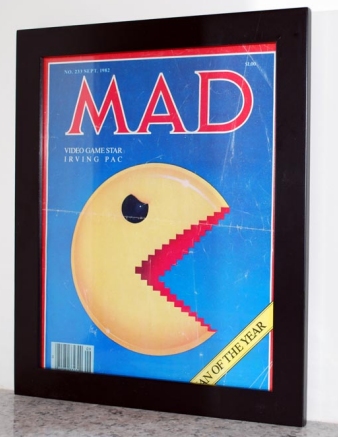 But there are a few exceptions, even for me. Mad Magazine #233 from September 23, 1982 is probably the coolest of them. It’s not in great condition. In actuality, it’s only a framed cover. It’s a pretty cool cover featuring Pacman (named Irving Pac by Mad), and appropriate for the time, but that’s not what makes it so worthy of hanging on to.

I was born in July of 1982. This cover has been with me since September of the same year. I was raised on a steady diet of videogames, starting with the Atari 400 (none of that 2600 junk for me, thanks) and moving to the Atari 130XE, NES, SNES and the rest. ‘Pacman’ was the beginning of all that. It was the first game I played, and a favorite of mine for a long tim.

I don’t play ‘Pacman’ all that often these days, aside for the occasional game of ‘Pacman Championship Edition.’ That same magazine cover is still there, though. It’s important to remember your roots.

I’m a Woody Allen fan. I’ve loved his movies since I was a kid growing up in New Mexico and happened to catch ‘Sleeper’ on TV. I mention New Mexico, because I doubt too many of my classmates grew up enjoying movies about a neurotic New Yorker. (I don’t think anyone else in town did either. I could always find previously-viewed VHS tapes of his movies in mint condition.) Of course, since my mother is a neurotic New Yorker, it all sort of made sense. Simply put, I grew up thinking the guy was a genius. I still do! And since I’m not from New York (a place where folks throw around the G-word with abandon), I don’t use that word lightly. He’s the only director I know whose films all demand a second look. 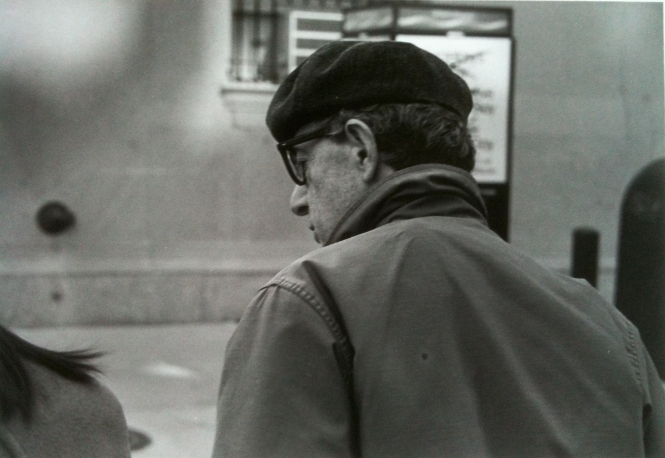 So I was more than a bit excited to step out of a store on Madison Avenue in 1999, and hear my aunt whisper, “Look who’s coming down the street.” When I glanced up, Woody and wife Soon-Yi Previn were coming toward us, pushing a baby carriage, with a photographer from The Post chasing after them. This was the first time the couple had ever appeared in public with the first of their adopted children, and the tabloids were in hot pursuit. As it happened, I had a camera with me for a photo class I was taking at the time. So, despite feeling a little guilty, I followed along behind as Woody and Soon-Yi strolled down the avenue, stopping every so often at a cross street. I wanted to take a photo of him for the project I was working on. At the same time, I didn’t want to seem like a total asshole in the eyes of one of my idols. Finally, I found myself stopped at a corner with Woody, Soon-Yi, and the photographer from The Post. Woody had recognized the photographer and was chatting with him when I approached. Finally, he looked over at me and I got up the nerve to ask if I could take a picture. “Sure. I’m not gonna pose, but you can take a photo as we’re walking.”

So that’s what I did. Click. I snapped a photo as they continued on, then I headed on my way. It’s not straight-on, but the figure in the photo is totally recognizable, and in some ways I think it’s better than a regular snapshot would ever have been. Either way, that’s the story behind the most prized item in my home theater.

My most legendarily geeky stuff isn’t in my home theater room, so I can’t ramble on about, say, my endlessly sprawling ‘Scott Pilgrim vs. the World’ shrine or my ‘Killer Tomatoes’ archive. Pretty much every square inch of my living room is covered with posters, DVDs, and Blu-ray discs. You can tell with a quick glance just how spastic my taste in movies is. I have a heavily autographed one-sheet from ‘The Princess and the Frog‘ right to the slimy space-slugs from ‘Slither‘. A poster for ‘Josie and the Pussycats’ is saddled up next to the coffin-shaped boxed set for Amando de Ossorio’s ‘Blind Dead’ tetralogy. 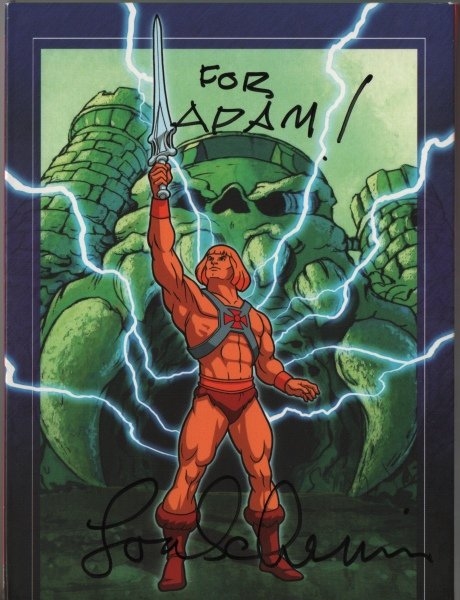 My stack of autographed posters and DVDs in there span everything from the stars of ‘Mystery Science Theater 3000’ to Weird Al to comic artist Bryan Hitch. I have a definite soft spot for my ‘Venture Bros.’ DVD set autographed by artist Bill Sienkiewicz and the ridiculously random UK import of ‘Make It Happen’ on Blu-ray that I asked Mary Elizabeth Winstead to sign a couple of weeks ago.

If I had to pick just one highlight, though, it’d be a ‘Masters of the Universe’ DVD set autographed by Lou Scheimer, Paul Dini, Jay Scheimer, Tom Sito, Erika Scheimer, Bruce Timm, and Tom Tataranowicz.

Nothing defined my childhood quite like He-Man, and nothing’s defined my adult life quite like my home theater. So it’s kind of great to be able to point to one thing that manages to encompass both.

Even though I came up with this week’s crazy topic, I must confess that I’m cheating a little with my answer. The item I’ve picked isn’t currently on display in my home theater, but I honest-to-god plan to put it on display eventually. I own it, it’s in my collection, but I just haven’t found the time to frame it or found the right place for it yet.

Don’t get me wrong, I have plenty of movie and TV junk littering my HT room. A host of action figures proudly stand atop my DVD/Blu-ray shelves. One on side of the room, two of the giant mech robots from ‘Neon Genesis Evangelion‘ aim their enormous weapons down at my seating position. On the other side, I have a mini diorama with Mulder and Scully from ‘The X-Files‘ conversing with Dr. Evil from the ‘Austin Powers‘ movies while a warrior bug from ‘Starship Troopers‘ sneaks up from behind. 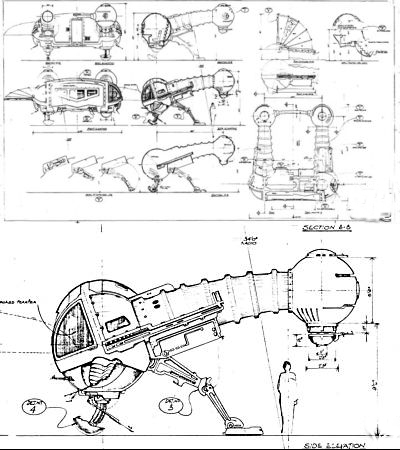 I’ve mentioned once or twice before in this blog that my favorite movie is ‘Dune‘ and that I own a huge collection of memorabilia from that film. Sadly, most of those items are currently boxed up, out of sight. If we ever move to a larger house, I’m going to need a lot of space to build a proper ‘Dune’ shrine. In the meantime, I have a framed poster on my wall, but that hardly seems like anything too special.

About a year ago, I purchased a large lot of items from the film’s production illustrator. Among these are many behind-the-scenes photos and pieces of artwork, including sketches in David Lynch’s own hand. My absolute favorite of these are the blueprints. I have some extremely intricate and detailed design blueprints for sets and props and vehicles seen in the movie. Some of them are really HUGE! One of these days, I’m going to get around to framing the blueprint for the Emperor’s throne room. However, because that will take up the better part of one whole wall in my room, it may not happen in my current apartment. One day, though. One day…

Now it’s your turn. Tell us what items you’re proudest to display in your home theater.